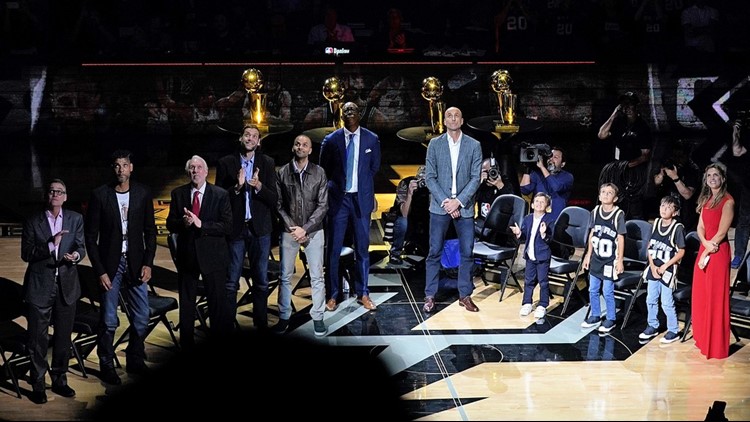 Photo by: Photo by Antonio Morano (bit.ly/XR79FT) / Special to KENS5.com
Former Spurs great Manu Ginobili, his family, coach Gregg Popovich and ex-Spurs teammates look up to the rafters at the AT&T Center as Ginobili's No. 20 jersey takes its place in the team's history.

SAN ANTONIO — Manu Ginobili had one more glorious performance at the AT&T Center on Thursday night.

With fans chanting his name and the air in the building thick with emotion, Manu made it through the ceremony for the retirement of his jersey number with the aplomb that set him apart during his 16-year career with the Spurs.

Standing at midcourt with his wife, three sons, coach Gregg Popovich, former teammates, and a capacity crowd looking on, Ginobili went to great lengths to thank everyone who helped him during his “fabulous journey” from his native Argentina to stardom in the NBA.

Speaking in English and Spanish during the roughly one-hour ceremony, which followed the Spurs’ 116-110 victory over the Cleveland Cavaliers, Ginobili touched all the bases after he was introduced by emcee Sean Elliott, whose No. 32 jersey is among the nine hanging from the rafters of the AT&T Center.

Popovich, Tony Parker, Tim Duncan and Fabricio Oberto, who played with Ginobili on Argentina’s national team and the Spurs, spoke briefly before giving way to Ginobili.

“The way the team was set up, we all needed each other,” said Popovich, who coached Ginobili throughout his career. “And without Manu, there were no championships. As Tony said, his ferocity, his drive, his unbelievable will to win, his competitiveness, were off the charts.

“But I can tell you this, in all honesty, as good a competitor as he was, and how much he gave of himself – he loved it, he loved the game, he loved the competition, he was all about winning – but that was that. What he cares about more and what drives his life are those four people right there.”

Popovich was referring to Ginobili’s wife, Many, and their three sons.

“That’s where his heart is,” Popovich said. “And that’s what makes him so special, both on and off the court. He understands priorities.”

When it came time for Ginobili to speak, his voice cracked with emotion as he expressed his gratitude to his wife and his parents, who were in the crowd, for their unwavering support throughout his career.

Then he thanked the fans.

“I am so thankful I would like to go shake all of your hands,” Ginobili said, as the crowd cheered loudly. “I’m one of the lucky ones. I’ve been dealt amazing, amazing cards. I just had to play them OK. That’s all I had to do.”

Ginobili did more than OK for himself, winning four NBA championships with the Spurs, the only NBA team he ever played with after entering the league as a 25-year-old rookie in 2002.

A European star in his own right before he joined the Spurs, Ginobili is one of only two players who have won an NBA title, an Olympic gold medal, and a Euroleague championship. The other is Bill Bradley.

Selected by San Antonio with the 57th overall pick in the 1999 NBA draft, Ginobili was 40 years old when he played his final game last April in the first round of the Western Conference semifinals. He turned 41 in July and announced his retirement a month later.

Ginobili left the game as a lock for the Naismith Memorial Basketball Hall of Fame.

“I came to San Antonio without knowing anything about the city,” Ginobili said. “I carried a lot of doubts and uncertainties, without knowing what it was going to be like playing for that guy (Popovich), to play with David Robinson.”

Ginobili recalled the first time he went into a game as a rookie.

“You guys go nuts and chant my name,” he said. “I felt, you know, that you guys had my back. I’ll be forever thankful, so thank you very much.”

Ginobili went on to become one of the most beloved players in Spurs history. He inspired his teammates and earned a special place in the hearts of the franchise’s fans around the world with his grit, passion and competitive ferocity.

Ginobili’s charisma and affable nature made him an exemplary ambassador for the NBA. Fans from Argentina, where Ginobili is one of the most popular athletes in the country’s history, often made the pilgrimage to San Antonio to cheer him on. But Ginobili’s popularity extended beyond Argentina and San Antonio.

It was not unusual to see fans from other countries holding homemade signs supporting Ginobili during games at the AT&T Center. Ginobili also had a loyal following when the Spurs played on the road, with fans proudly wearing No. 20 jerseys as they cheered on their favorite player.

Ginobili always accommodated his fans, going out on the court before warming up to sign autographs and pose for photos. That connection was on full display Thursday night.

A consummate team player, Ginobili thanked what he called “two special groups,” his teammates on the Argentina national team and, of course, those who played with him during his career with the Spurs.

When Ginobili was through speaking, his No. 20 jersey was uncovered in the rafters of the AT&T Center, joining eight others synonymous with greatness in Spurs history and NBA lore.

Then the crowd cheered and chanted his name one last time.