Hundreds of thousands of excited Astros fans packed into downtown Houston for the World Series Championship Parade. If you can't be there, no worries. 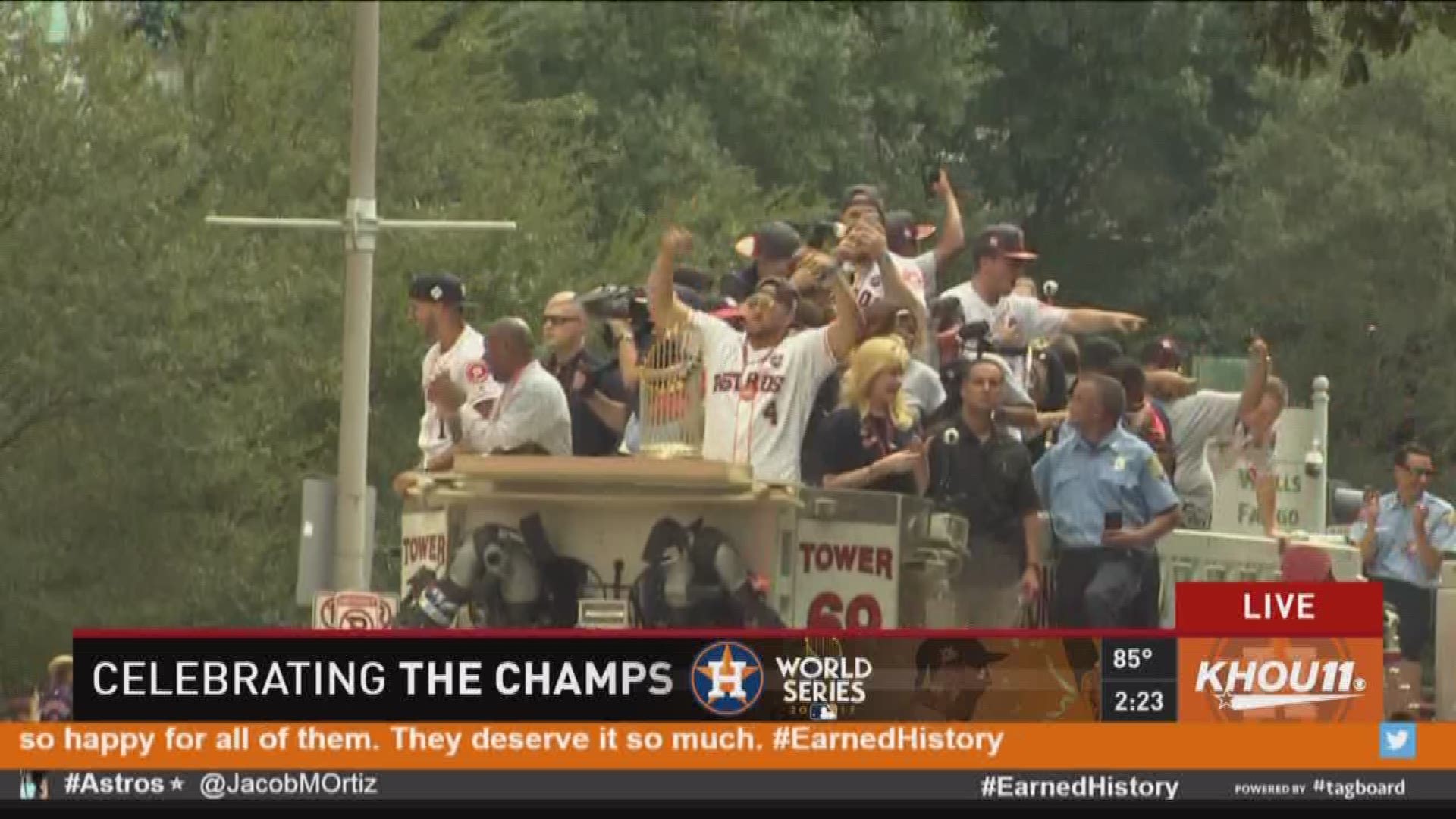 Hundreds of thousands of excited fans packed into downtown Houston Friday to show their love for Astros at the World Series Championship Parade.

WATCH: MVP George Springer thanks fans for believing in him 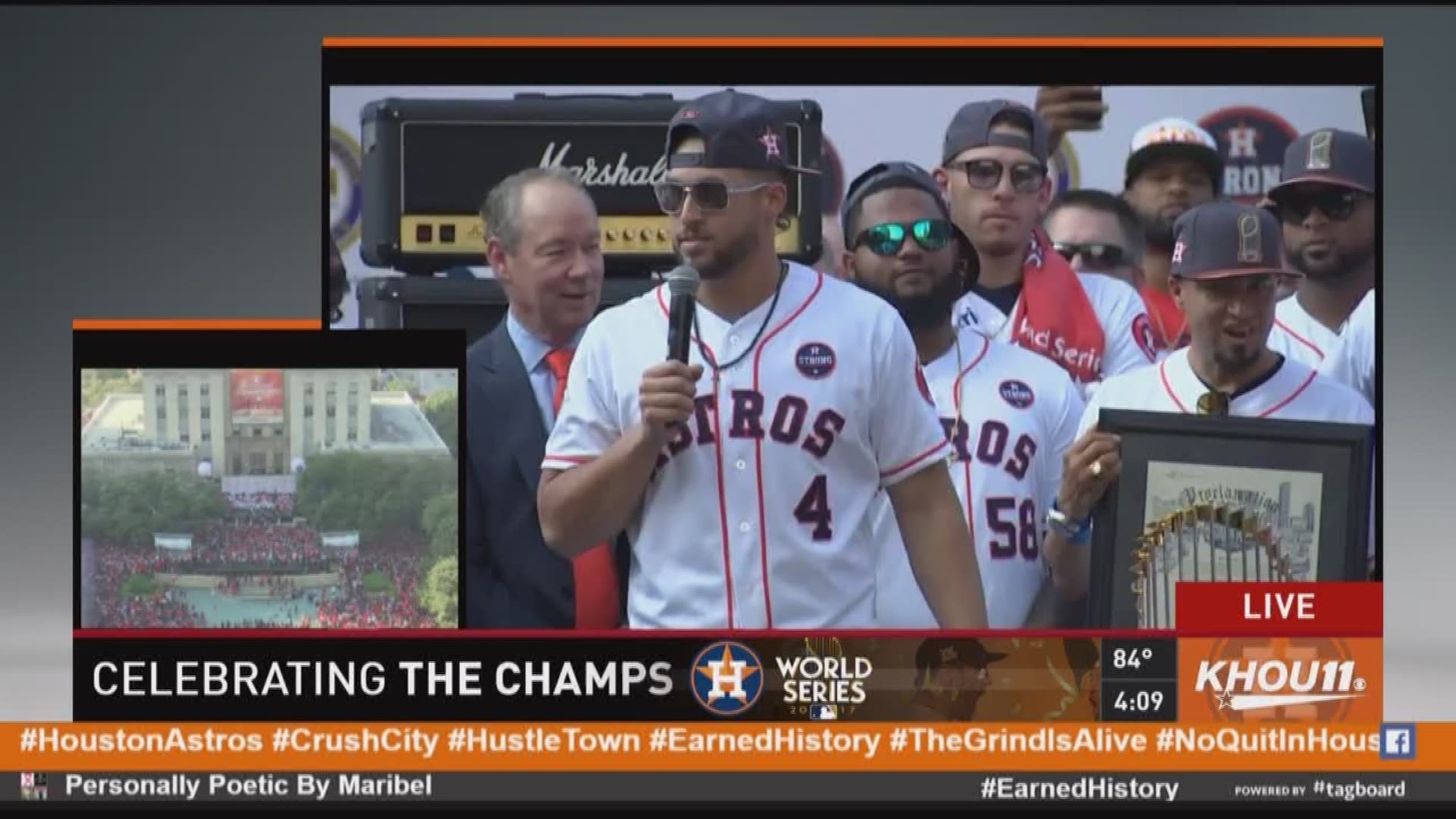 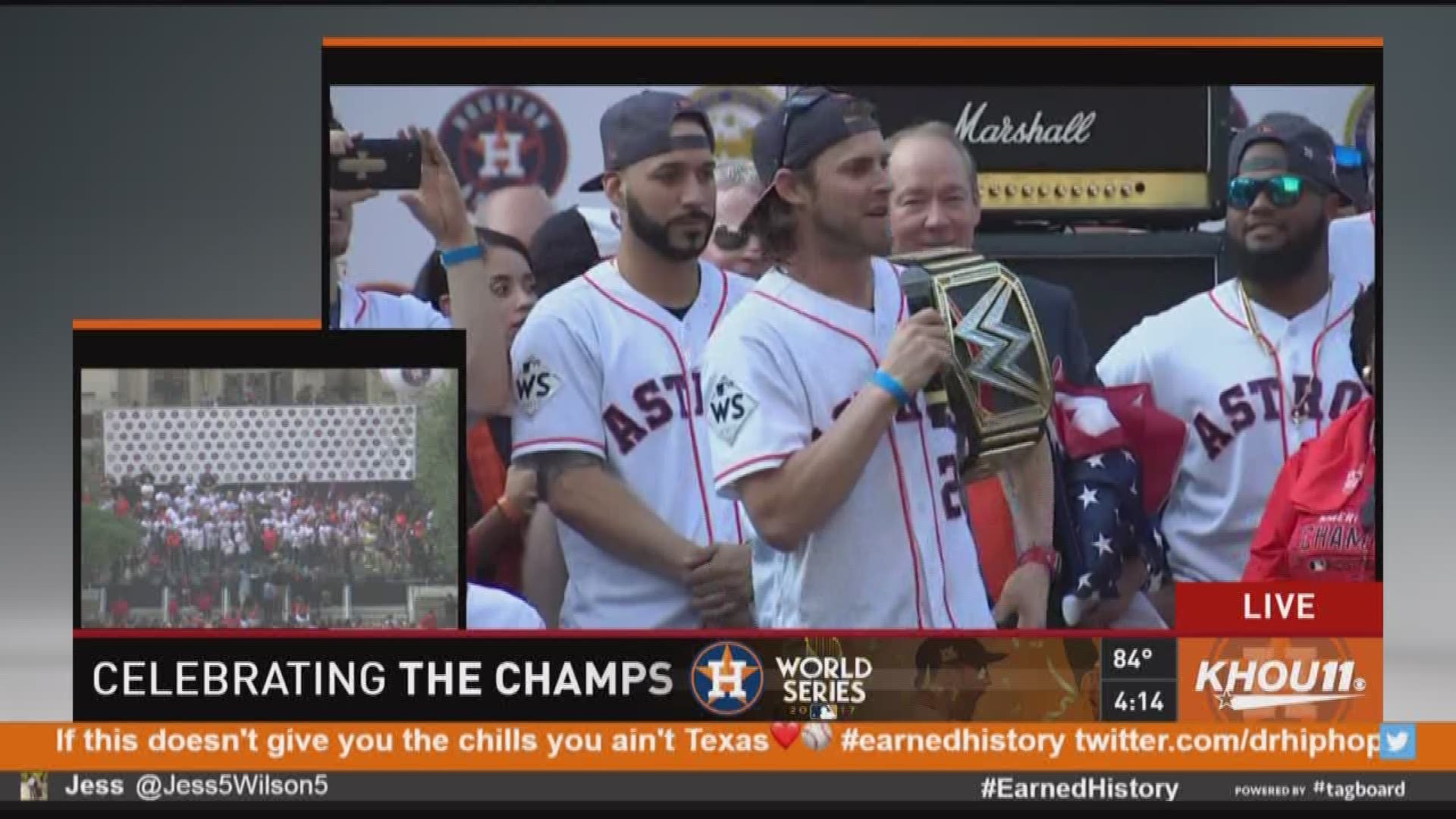 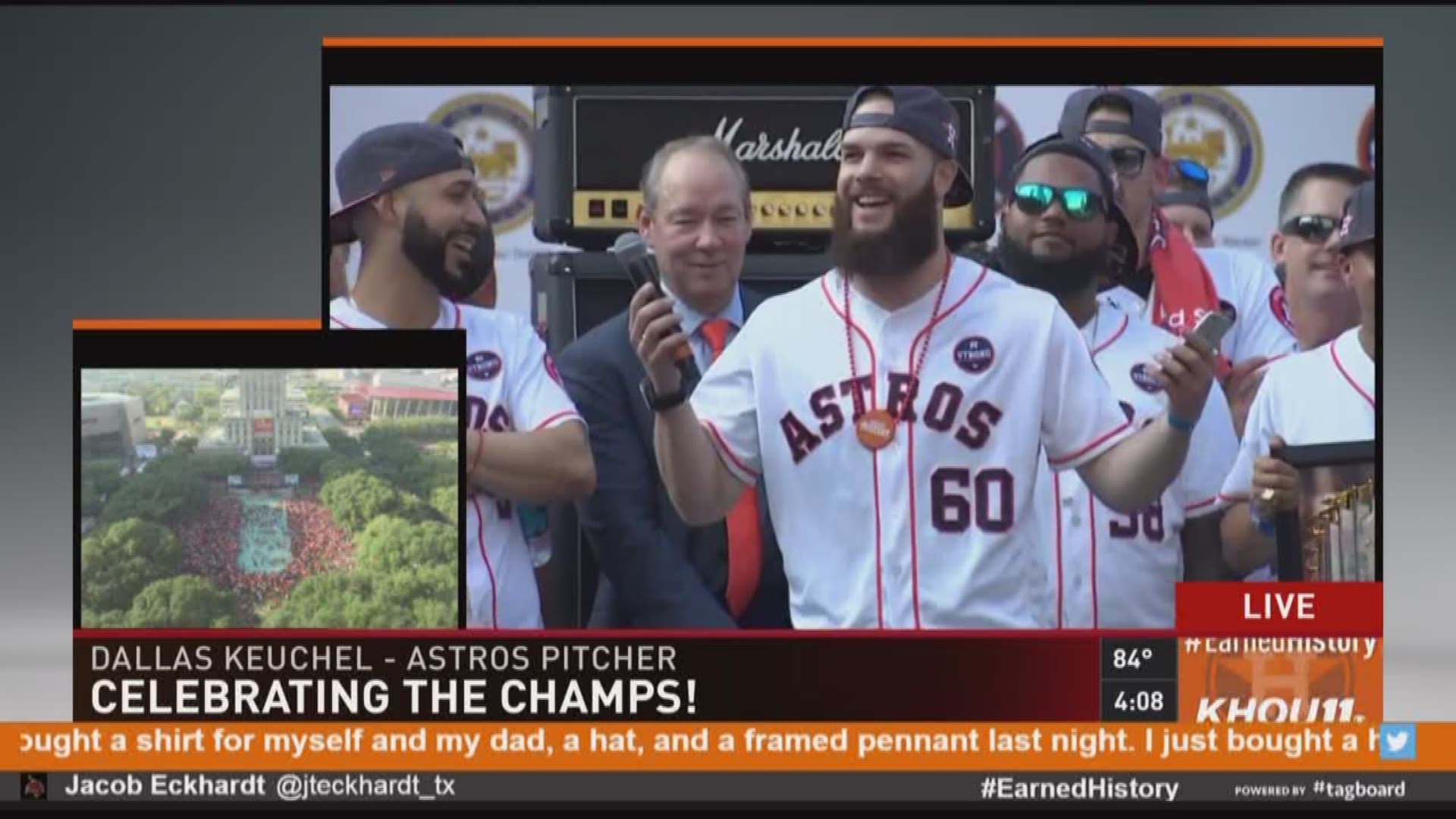 There were so many magical moments during the Astros World Series Championship Parade so we clipped videos of some of the highlights.

MORE: Woman drops hat from parking garage during parade, fellow Astros fans work to get it back to her

Best seat in the house

Can you imagine the Astros Parade watch party they had in heaven? We're sure KHOU 11 Sports Director Bob Allen, who passed away last year, was in the middle of it all. And longtime Astros announcer Milo Hamilton was doing the play-by-play. And former stars like Joe Niekro, Darryl Kile, Ken Caminiti and Jose Lima were cheering for the champions.

Fan pays tribute to the late Bob Allen during parade 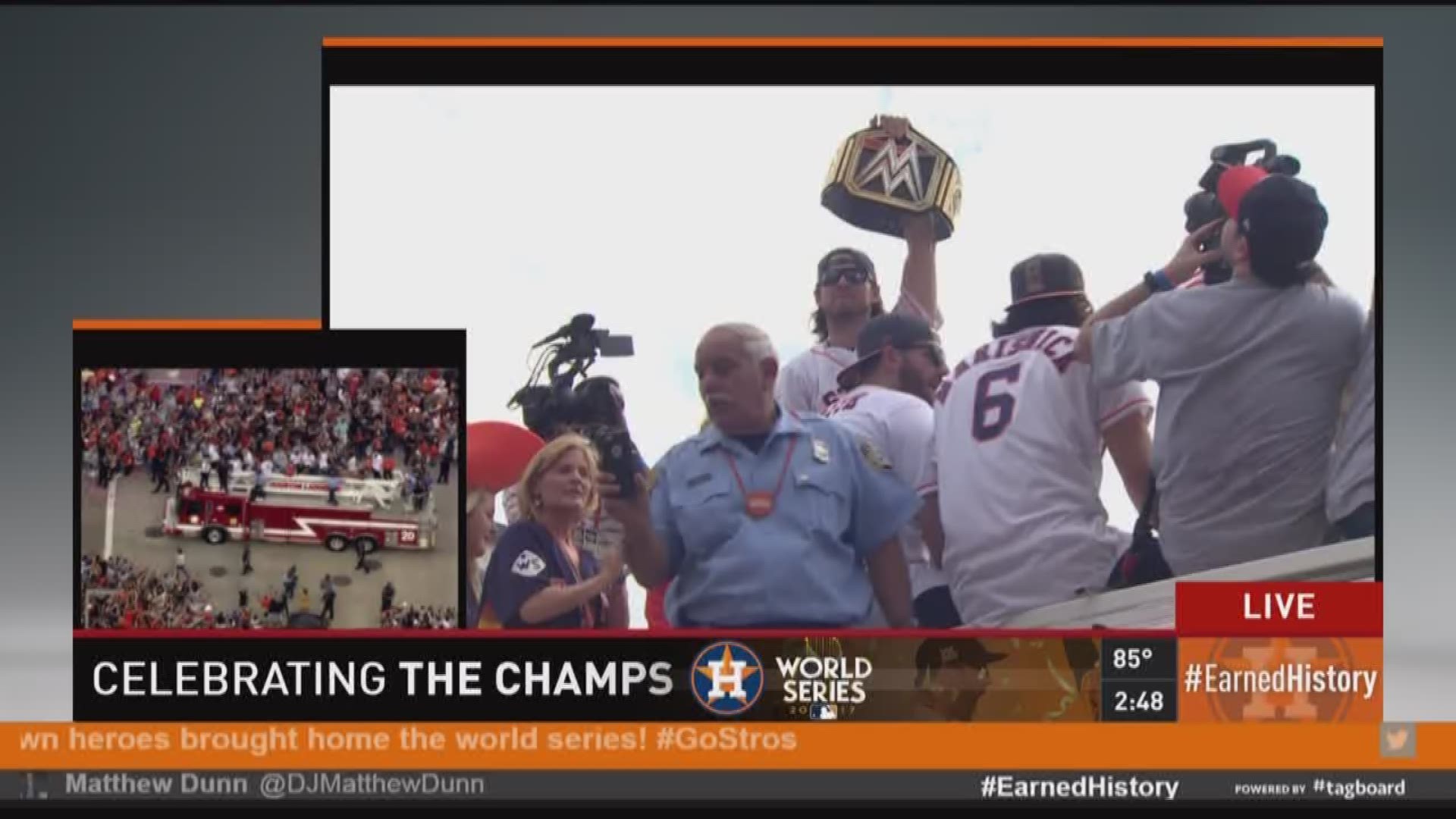 Many of the Astros fans who turned out for the World Series Parade have watched the team for decades. Everyone cheered -- and some cried happy tears -- as they finally watched a dream come true. KHOU 11 Meteorologist Chita Craft was cheering so loud she nearly lost her voice. 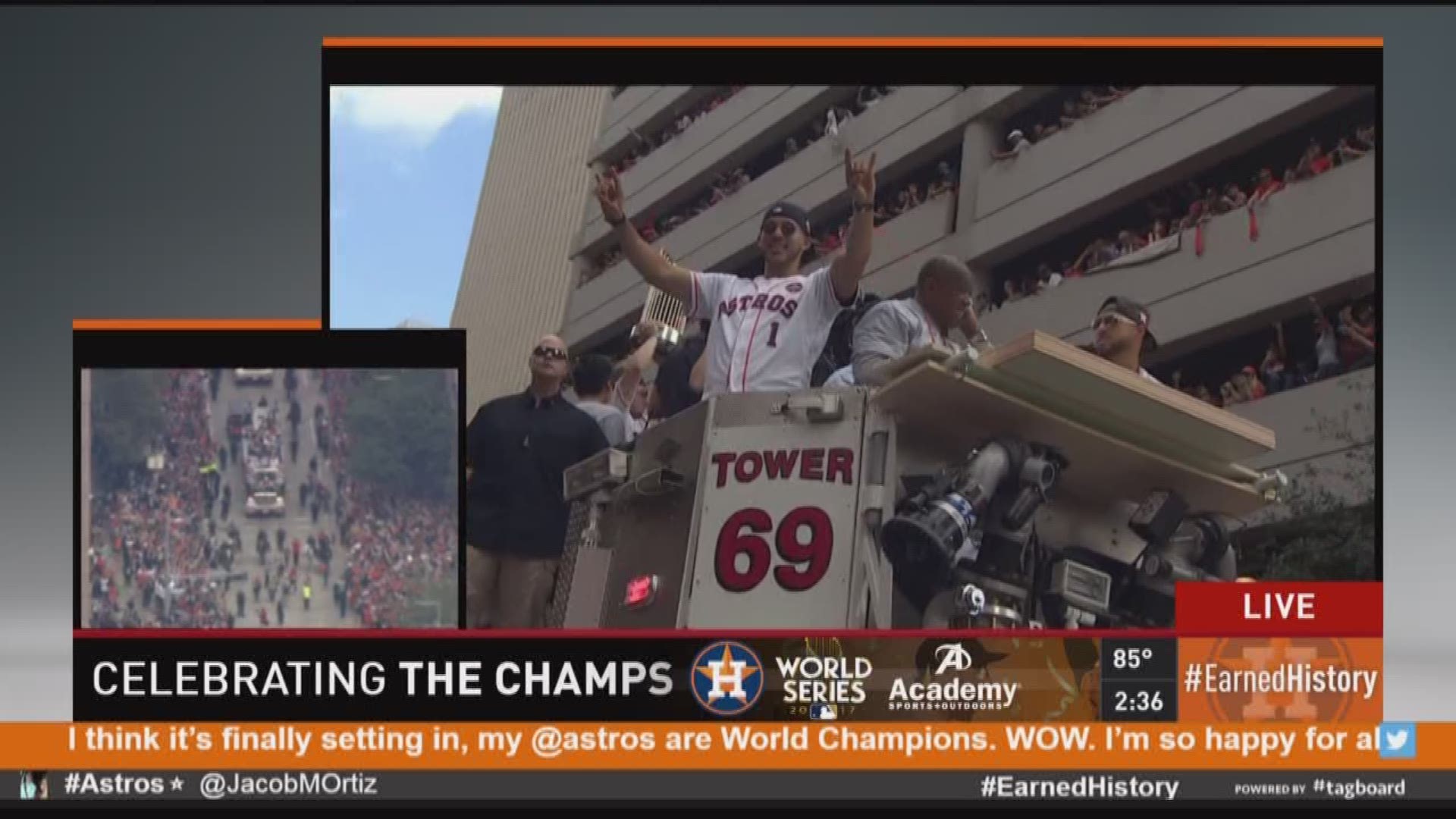 It was the moment hundreds of thousands of fans had waited hours for: The World Series Champion Houston Astros were the highlight of the parade as they passed by on three HFD fire trucks. Astros Hall of Famers Craig Biggio and Jeff Bagwell joined other former 'Stros on the third truck. 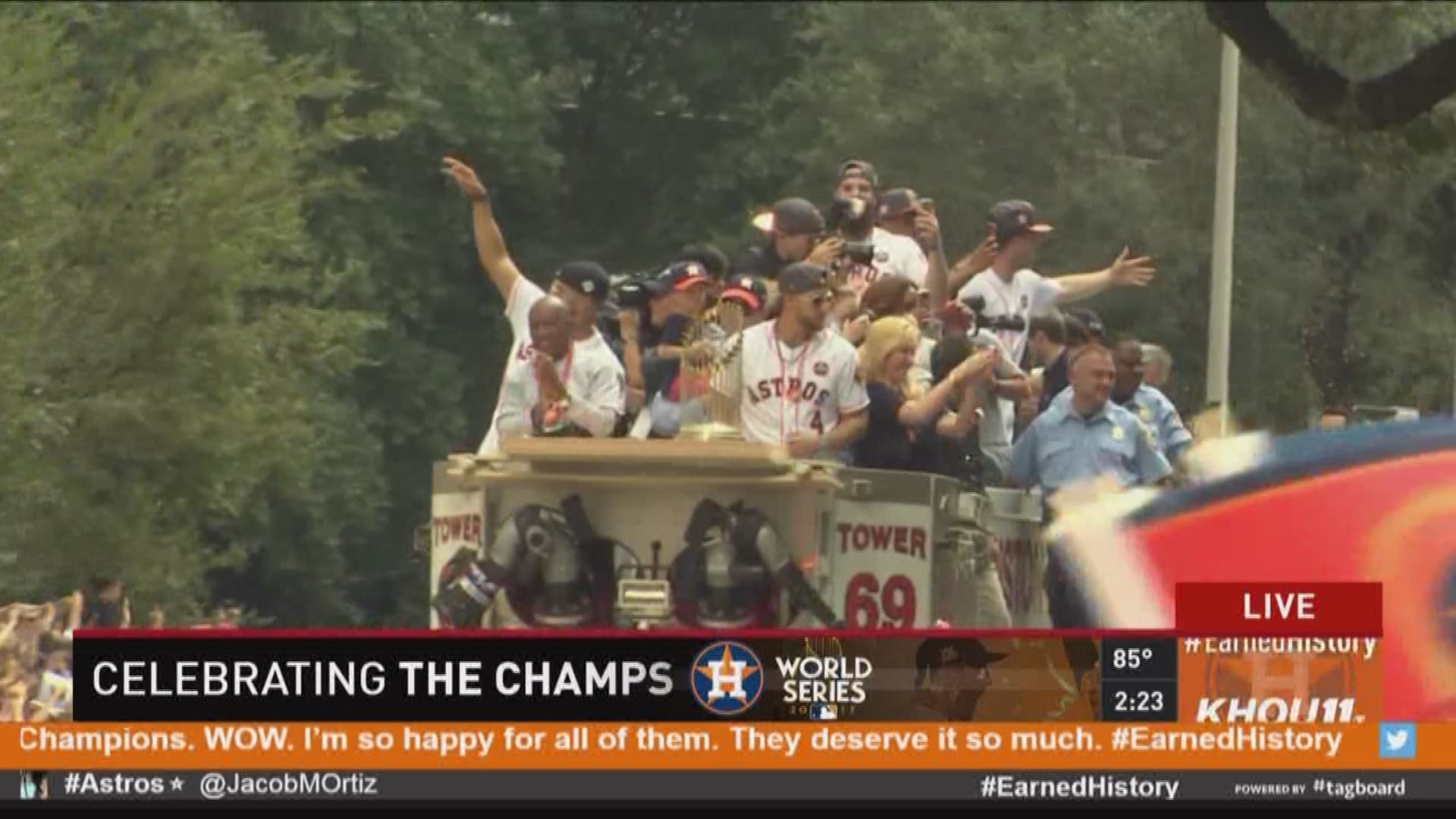 It was great to see Astros Hall of Famers Jeff Bagwell and Craig Biggio join the team on fire trucks for the World Series Championship Parade. They were also in Los Angeles when the Astros crushed the Dodgers 5-1 in Game 7.

Biggio told MLB.com he got a little teary after watching the team win it all.

Bagwell and Biggio, two of the most popular Astros of all time, played on seven playoff teams but only made it to one World Series where they were swept by the White Sox in 2005.

Astros players getting on the fire trucks #khou11 pic.twitter.com/YU6VYDYLSo

Nothing will upload down here, so be prepared for a massive photo/video dump post-parade. #Astros #WorldSeries #EarnedHistory

The trophy is here! pic.twitter.com/jj8Rm4h8xp

KHOU 11 showed our Astros pride with a banner that reads "KHOU stands with the Astros" flying high over downtown Houston. Fans cheered as the plane flew over. 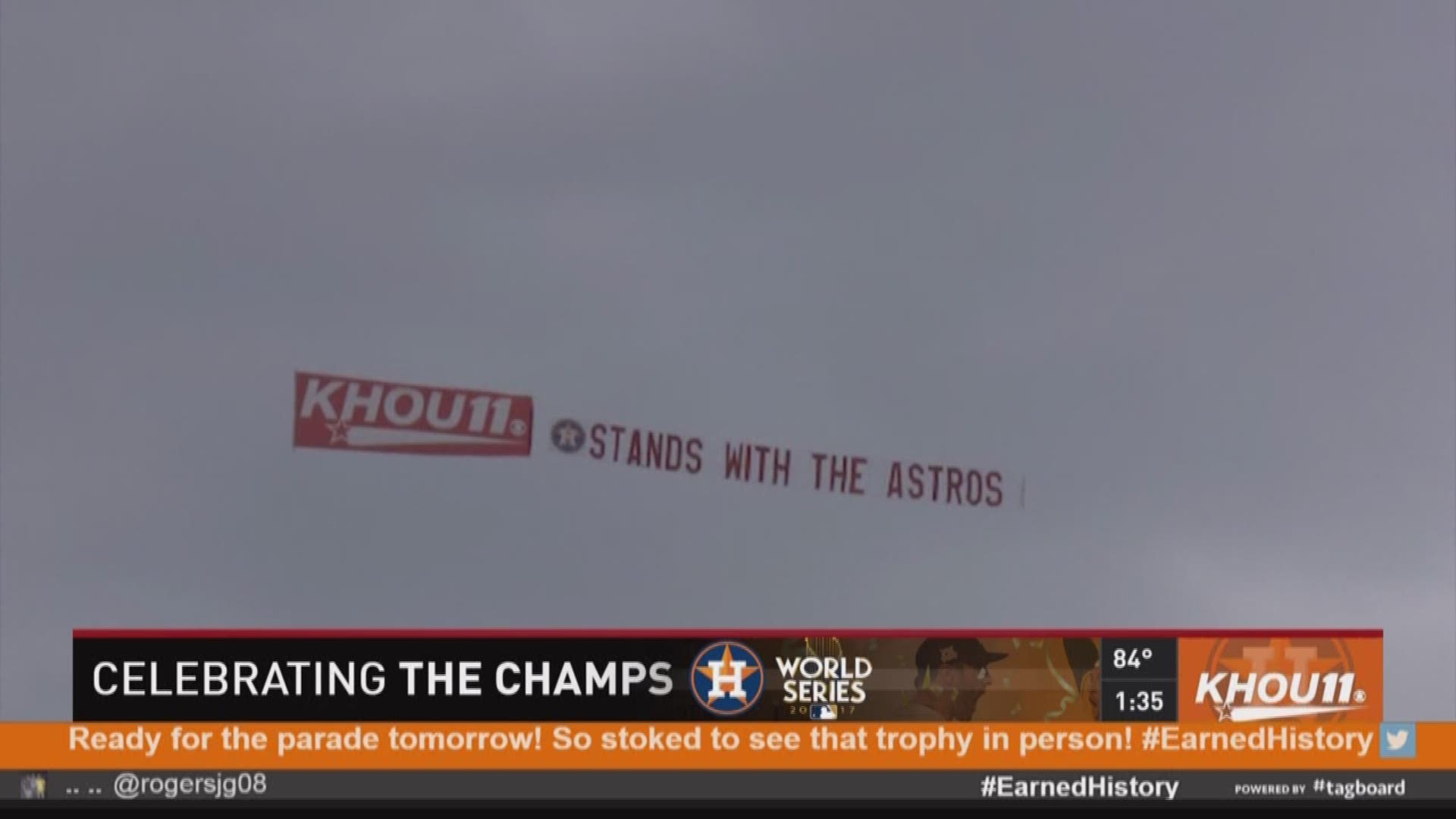 #EarnedHistory #khou11 We are minutes away from the start of the #Astros parade and the crowd is like:::: pic.twitter.com/AADAxETLoz

#KHOU11 Stands with the @astros! Congratulations to our #WorldSeries champions. See you at the parade! #EarnedHistory #HoustonStrong @KHOU pic.twitter.com/6e83tchdEy

Astros head to the parade 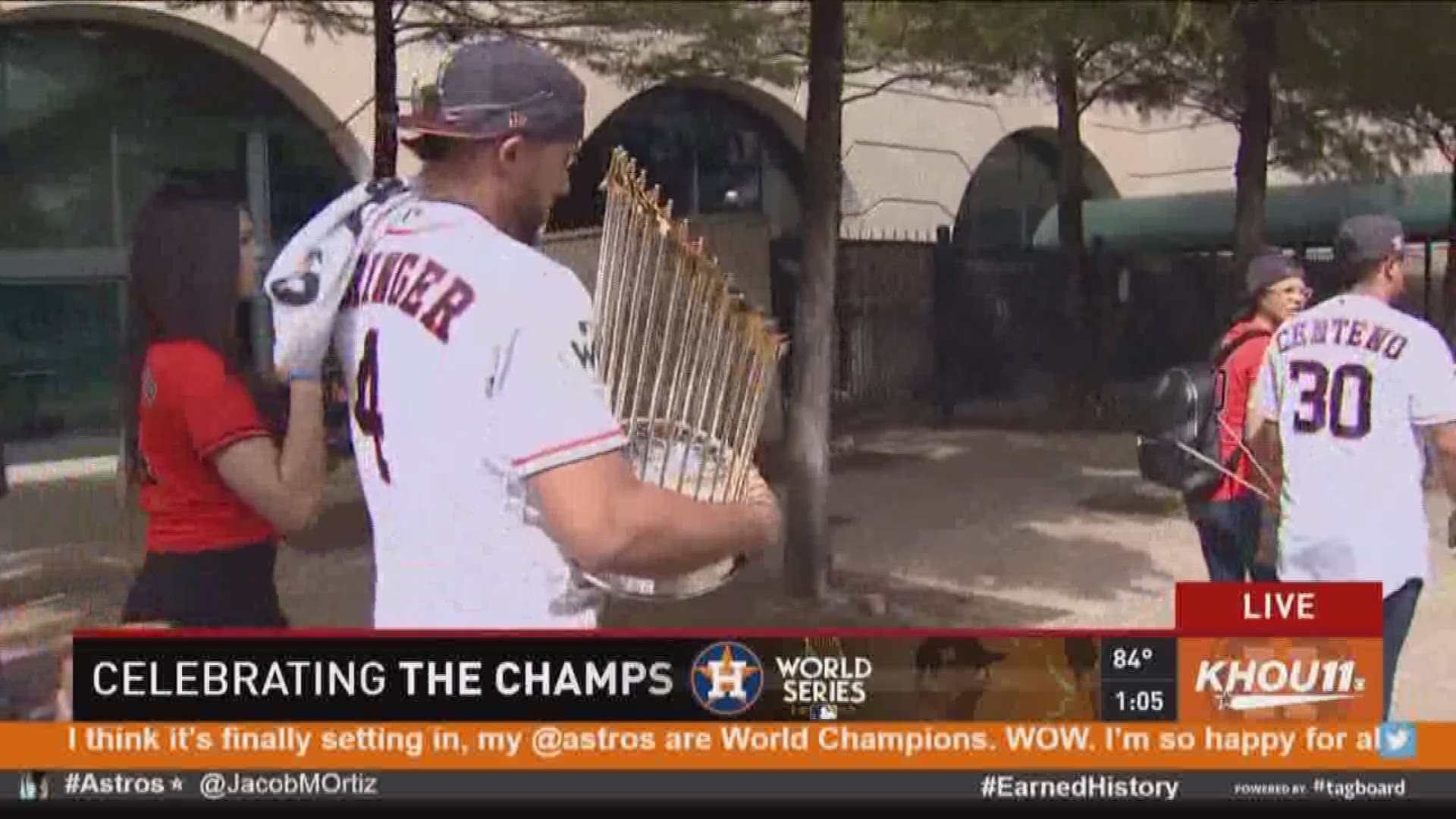 Before the parade started, Astros fans were dancing in the streets Friday to the tune of the "Altuve Polka" by a band called Polish Pete and the Polka? Hardly Know Her Band. 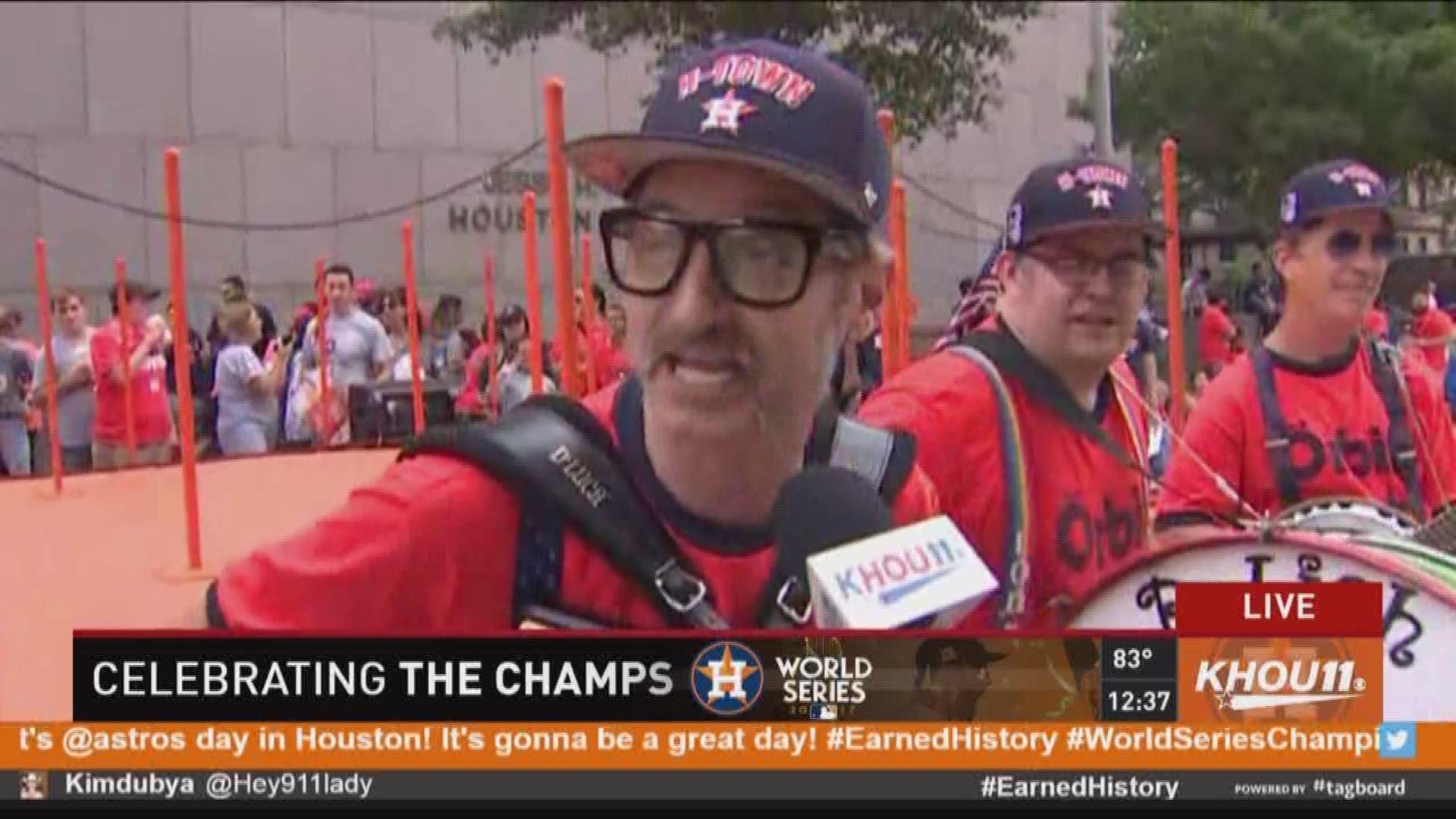 HPD Mounted Patrol is parade ready and excited for @Astros day! Look for them on the route #EarnedHistory #worldserieschamps pic.twitter.com/WOPHucUqOP

KHOU 11 Meteorologist Chita Craft chatted with excited fans while they waited for the Astros World Series Champion Parade to begin. 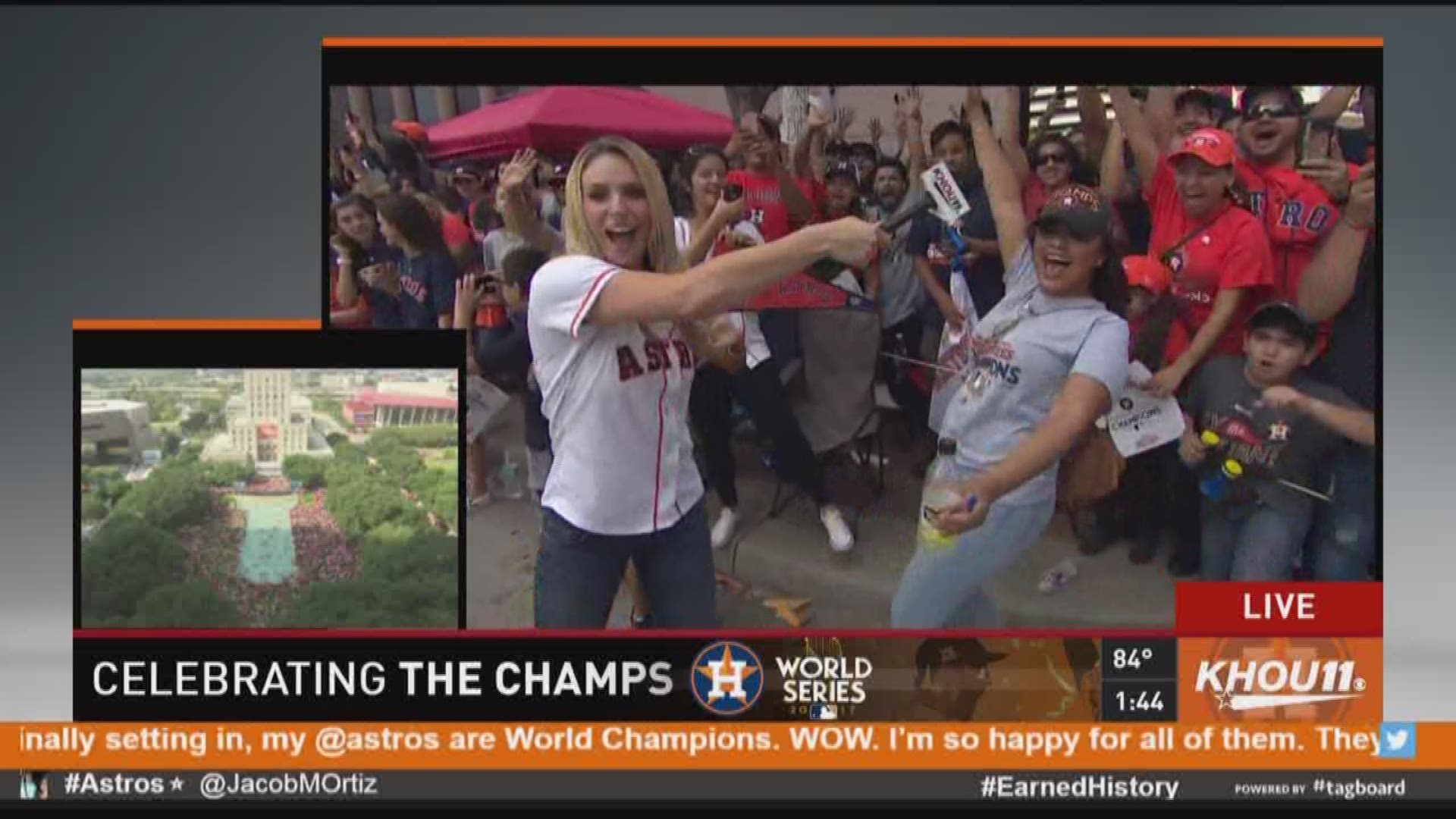 These fans are hyped! 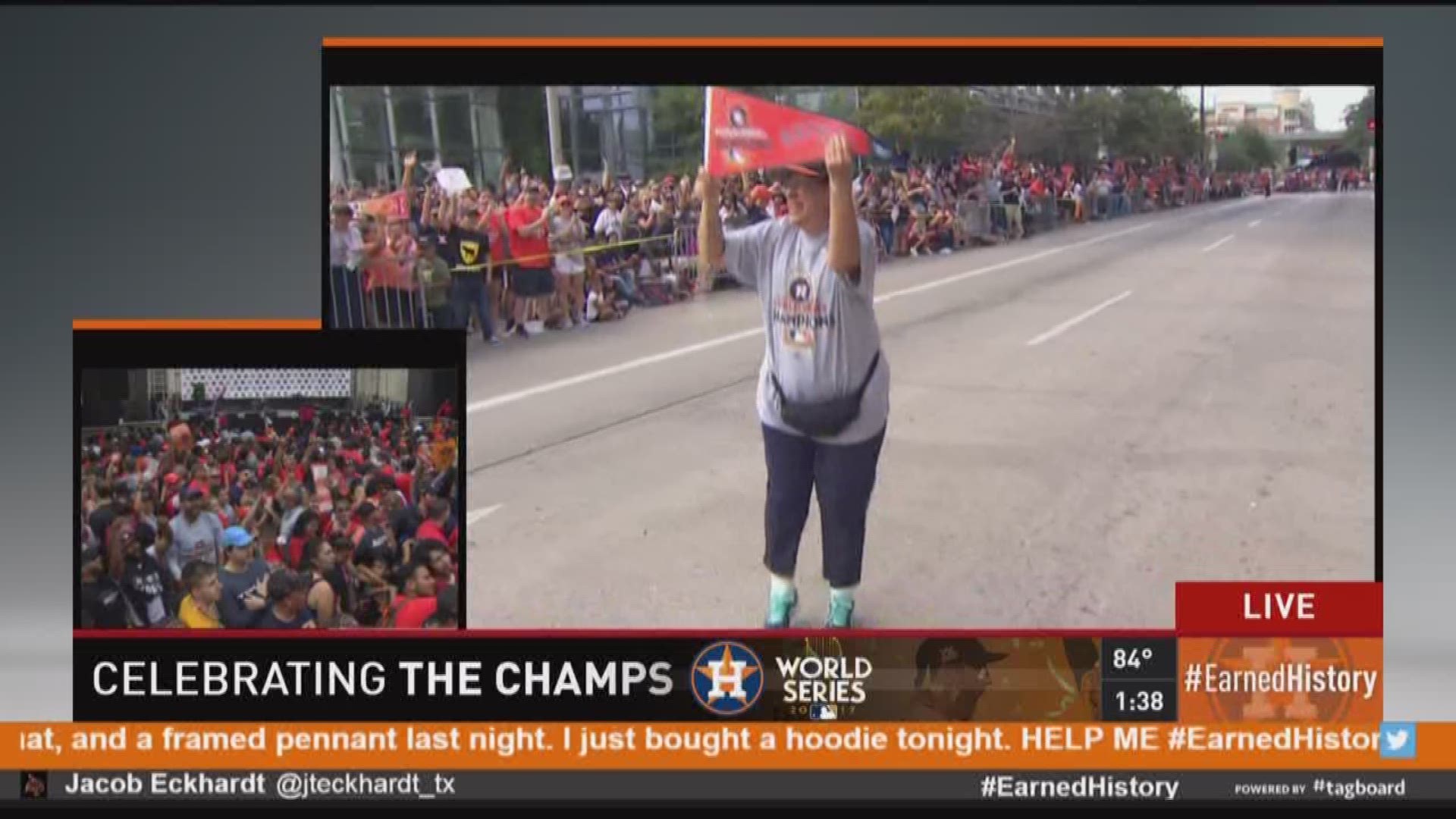 NASA’s Astros will salute the Houston Astros with a fly over of NASA T-38 trainer jets during the celebration. The aircraft will be flown by NASA research pilots David Johnson and William Pressley and astronauts Jeremy Hansen, Josh Cassada, Tracy Caldwell-Dyson, Jessica Meir, Tom Marshburn and Mike Fincke.

3 hours out from the #Astros parade and the crowd at Louisiana and Walker is getting rowdy! #EarnedHistory #khou11 pic.twitter.com/JaXTUt5Fqt

Guys! #Altuve and #Correa are already at the parade! #EarnedHistory #khou11 pic.twitter.com/vkbUcGfllw

Earlybirds get the prime spots

The City of Houston said Thursday it's expecting at least 700,000 fans to turn out. But the crowds grew so quickly Friday morning, they were forced to extend the parade route to St. Joseph's.

After Houston celebrates the Astros at home on Friday, the championship team will be going to Disney World for a World Series victory parade.