A crowd at Minute Maid Park that was cheering from Verlander's first pitch got even louder as Springer homered three times in the first four innings. 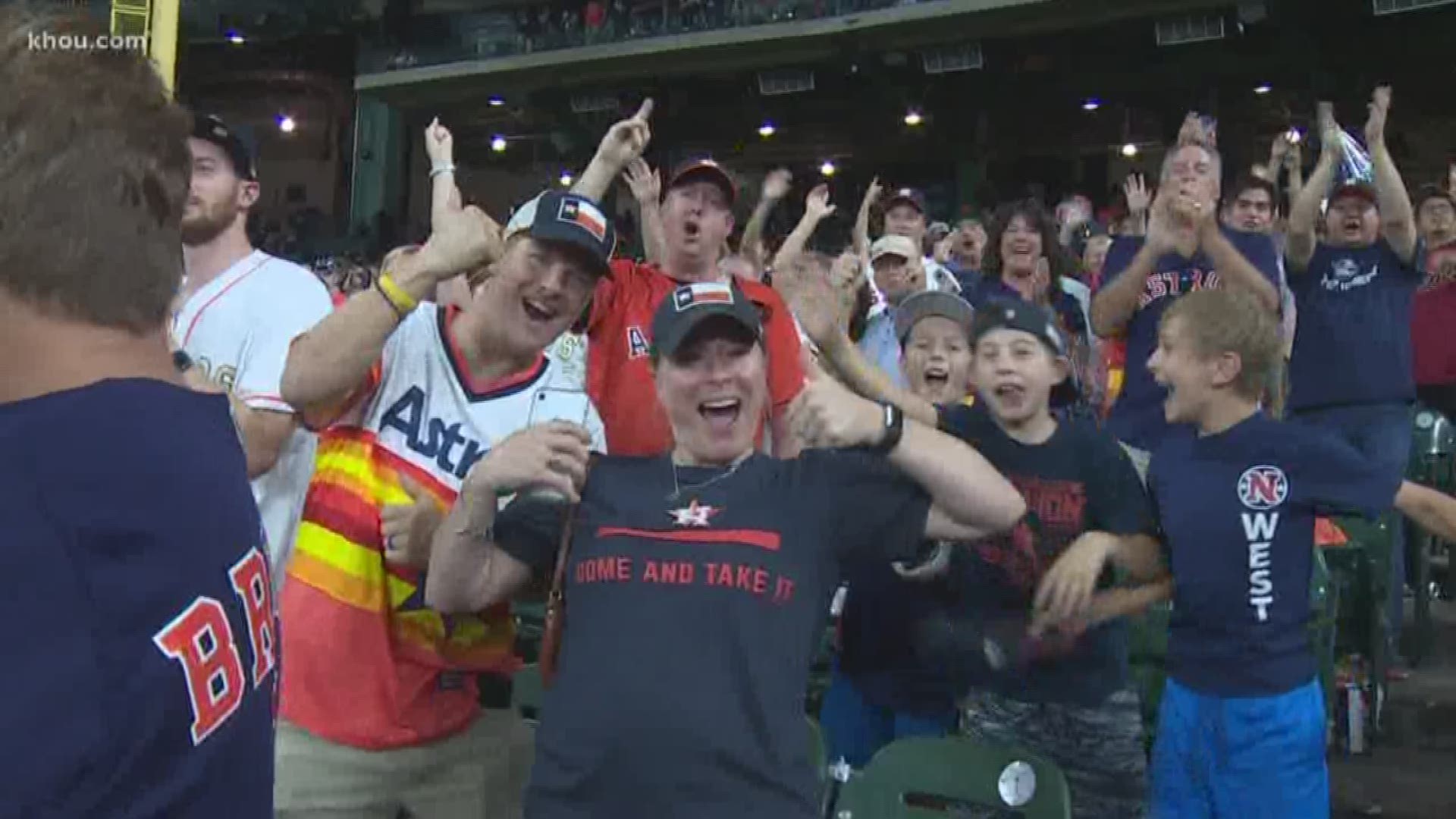 A crowd at Minute Maid Park that was cheering from Verlander's first pitch got even louder as Springer homered three times in the first four innings. The Astros kept breaking away and improved to 102-54, a half-game ahead of the New York Yankees for the best record in the majors.

After the final out, the Astros held a bouncing group hug in the middle of the diamond and posed for a team picture. It hasn't been determined who they will face in the playoffs as they try for their second World Series championship in three years.

Manager AJ Hinch spoke to the team in the clubhouse as the players broke out the bubbly and began a spraying celebration.

Springer, the MVP of the 2017 World Series, had two chances to tie the big league record for home runs in a game. He popped up with the bases loaded in the fifth and grounded out in the seventh.

Verlander (20-6) yielded six hits and two runs in five innings to reach 20 wins for the second time in his career and the first since winning the AL MVP and Cy Young Award in 2011 when he went 24-5 for Detroit. This year's AL Cy Young front-runner struck out five to leave him six strikeouts shy of becoming the 18th pitcher in MLB history to reach 3,000.

The 36-year-old righty has fanned 288 this season, second most in his career in second in the majors behind teammate Gerrit Cole.

Springer's homered on his first three at-bats to help Houston take a 4-2 lead in the fourth inning. The Astros added six runs in a fifth, highlighted by a two-run homer from Alex Bregman to make it 10-2. 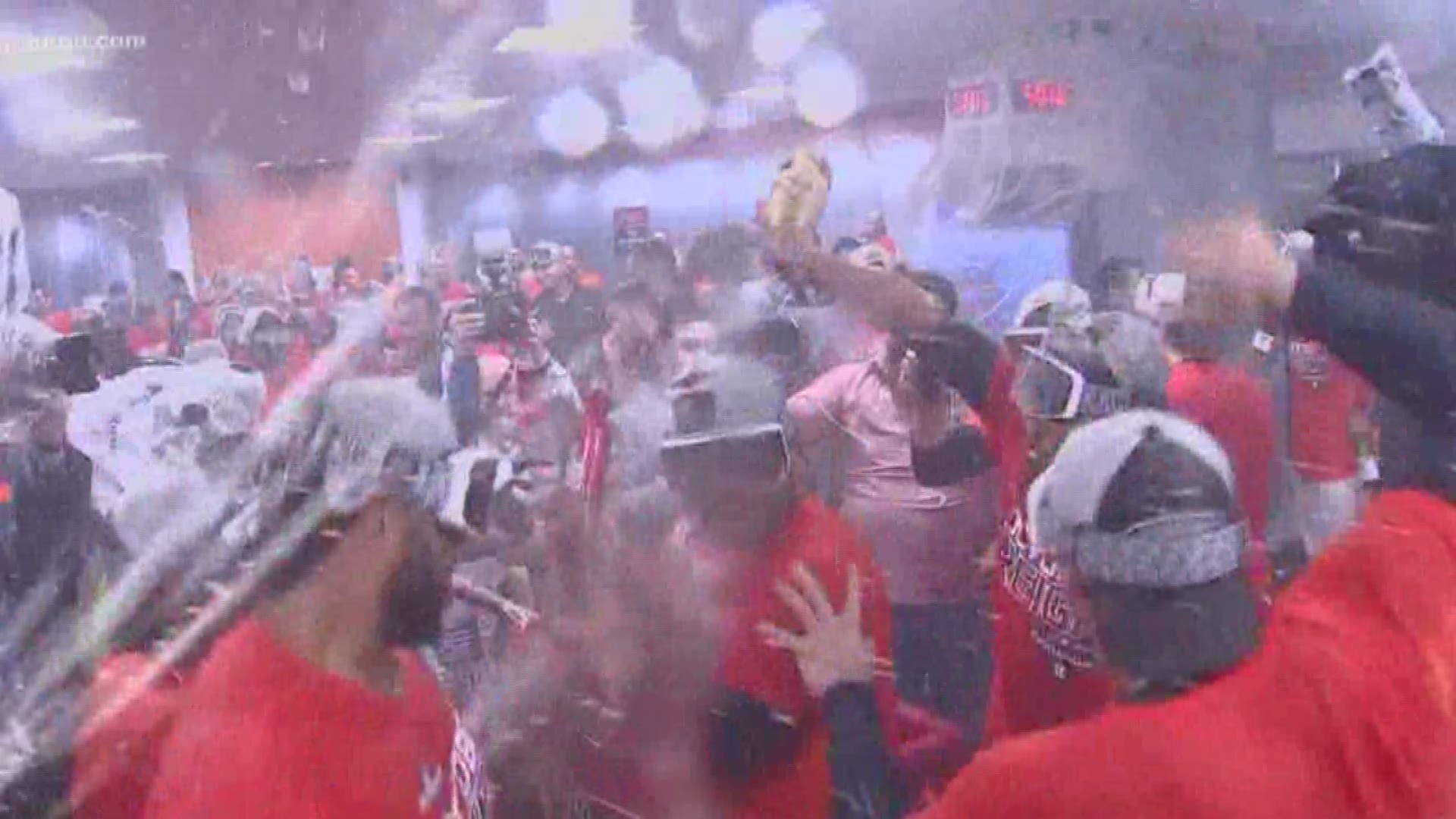 Springer, who has a career-best 38 home runs this season, got to work immediately, sending Jose Rodriguez's first pitch into left-center field for his franchise-record 12th leadoff homer this season. That left him one shy of the MLB record for leadoff homers in a season set by Alfonso Soriano with the Yankees in 2003.

Jared Walsh and Michael Hermosillo hit back-to-back triples with two outs in the second to tie it up.

Aledmys Diaz singled with no outs in the second and Springer connected off Rodriguez (0-1) again with two outs to put the Astros up 3-1.

There were two outs in the fourth when Springer sent a fastball from José Suárez into the seats in left field to make it 4-2.

The record of four homers has been done 18 times, mostly recently by J.D. Martinez for Arizona in 2017. This was the 14th time in a regular-season game in franchise history that an Astros player has hit three homers and the second time this season after rookie Yordan Alvarez also did it.

Astros: RHP Brad Peacock (right shoulder soreness) was reinstated from the 10-day injured list. He walked one and struck out one a scoreless sixth.

Angels: Los Angeles is off on Monday before LHP Dillon Peters (3-3, 4.81) starts in the opener of two-game series against Oakland. Peters allowed five hits and two runs in his last start but did not factor in the decision against the Yankees.

Astros: Houston is off on Monday and opens a two-game series at Seattle with Cole (18-5, 2.61) on the mound. Cole, who leads the majors with a career-high 302 strikeouts, won his 14th decision in his last start by allowed six hits and two runs in eight innings of a 3-2 win over Texas.