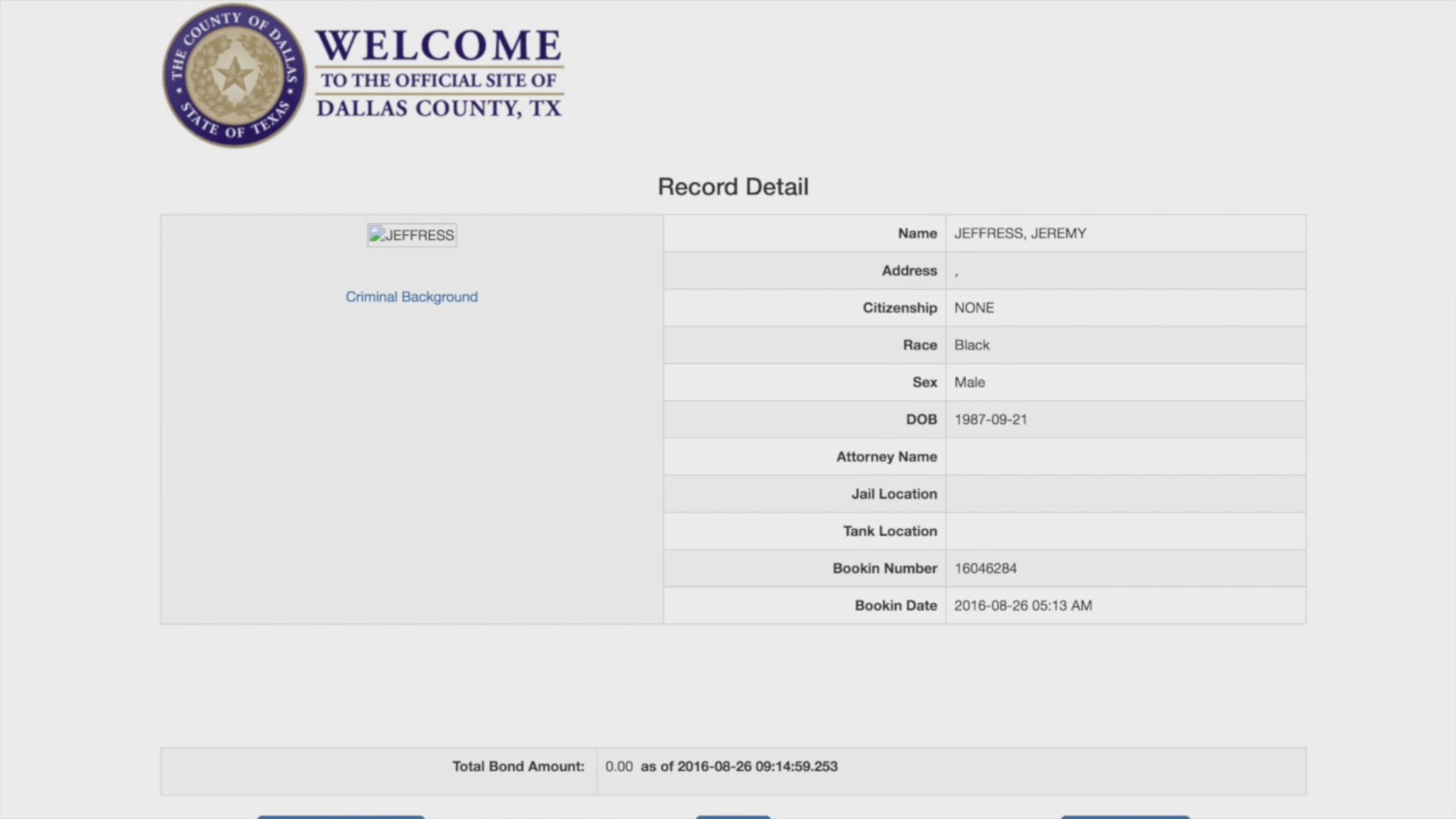 He was placed on the MLB restricted list following the arrest, meaning he wouldn't be in uniform Friday night.

"Due to [the DWI arrest], Jeffress is not able to report and perform services under his Uniform Player’s Contract (“UPC”) for tonight’s game," read a release from the Rangers.

According to an arrest warrant, just before 3 a.m., an officer observed a black 2009 Mercedes Benz MC5 driven by Jeffress traveling northwest in the 2500 block of Maple Avenue switch lanes without signaling, cutting off another driver, who honked at the Mercedes.

The officer pulled Jeffress over and noted he had bloodshot eyes and could smell alcohol on Jeffress' breath. He requested Jeffress' drivers license and proof of insurance, which the pitcher handed over, along with a Texas Rangers club card that showed he played for the team.

Jeffress told the officer he drank three-to-four cups of Hennessy cognac and Coke between 12:15 a.m. and 1:15 a.m., and he was driving the woman with him from the nightclub Sisu to her car in the 2400 block of Mahon Street.

As an officer searched Jeffress, he urinated on himself once again.

Officers searching Jeffress' vehicle also found a bag containing a leafy green substance believed to be marijuana or synthetic marijuana in the glove compartment. Jeffress denied it was his and told police he had "several passengers in the vehicle earlier in the day." His passenger also denied it was hers.

Since a link couldn't be developed as to who possessed the marijuana or synthetic marijuana, neither Jeffress nor his passenger were charged, but police took the substance into evidence. They also tested Jeffress' blood for both marijuana and synthetic cannabinoid.

Jeffress was arrested for DWI. The charges were posted to the Dallas County Jail website around 9:30 a.m.

The arrest warrant indicates a breathalyzer test showed Jeffress had a .115 blood-alcohol concentration at 2:54 a.m. He refused a blood test, but police obtained a warrant and drew three vials of blood from Jeffress just before 5 a.m.

Dallas County Jail records say Jeffress was booked into jail at 5:13 a.m. Friday. He was released just before noon.

“The Rangers are certainly disappointed in Jeremy’s actions of early this morning,” said President of Baseball Operations Jon Daniels. “We have been in touch with Jeremy’s representatives and Major League Baseball, and are continuing to work through this situation and gather more information.”

Jeffress, 28, was acquired in a trade with the Milwaukee Brewers just moments before the Aug. 1 trade deadline passed -- the same deal that brought catcher Jonathan Lucroy to Texas. Jeffress, a hard-throwing righty, has allowed a modest four runs in nine innings of work with the Rangers.