Rangers could be playing in new stadium by 2021

The City of Arlington and the Texas Rangers have officially announced plans to build a new stadium with a retractable roof. 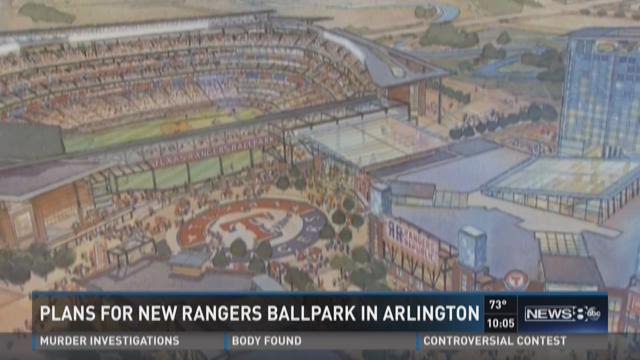 The City of Arlington and the Texas Rangers have officially announced plans to build a new stadium with a retractable roof.

It’s part of an agreement that that will keep the team in Arlington through the year 2054. Rangers part owner Ray Davis said he expects the team to be playing in the new stadium by Opening Day of the 2021 season.

The planned stadium would be built in what is currently a team parking lot south of Randol Mill Road.

“The Rangers’ ballpark in Arlington is personal for me,” Davis said. He shared an anecdote about buying $6 bleacher seats and sweating in the summer heat at the ballpark.

Davis said the organization had weighed the options of adding a roof to the existing stadium, but said those options would be “too expensive.”

Arlington Mayor Jeff Williams confirmed previously reported plans to use an existing sales tax to pay for the stadium. The Rangers and Arlington’s taxpayers will split the cost 50-50, with the citizens’ contribution capped at $500 million.

When current bonds for AT&T Stadium are paid, the same half-cent tax will go toward paying off the Rangers' new stadium, Williams said. AT&T Stadium is set to be paid off ahead of schedule.

The city council will discuss terms of the agreement during a May 24 meeting. If the plans are approved, the Rangers and the city will “execute a commitment to a master agreement and franchise extension,” Williams said.

The agreement would then be sent to the state comptroller for approval before making it to an official election scheduled for Nov. 8.

The announcement of Texas Live!, a $200 million mixed-use development that will include a 300-room hotel, in December was a driving force behind the decision to keep the Rangers in Arlington.

Texas Live!, a joint venture between the city and the Rangers, is expected to bring 1,800 jobs to the city and provide fans with a destination outside the high-profile sporting venues next door.

Construction begins on the Texas Live! project later this year and is scheduled to open some time during the 2017 season.

The new ballpark will be the third stadium in the franchise’s tenure in Texas. The team played in Arlington Stadium from 1972 to 1993 before what is now Globe Life Park was built.

ANOTHER LOSS FOR DALLAS

The announcement is the second big disappointment for Dallas in the North Texas stadium wars. Dallas first lost out to Arlington with the Cowboys, and now with the Rangers.

For years, elected officials have had a goal to bring the Rangers to Dallas, with discussions of possible sites like the former Reunion Arena location near downtown and even Fair Park. Boosters say Dallas has advantages Arlington can’t match, like a robust mass transit system and a dense fan base of office workers and residents who could more easily attend games.

Today, Mayor Mike Rawlings stayed positive, as he tried to keep the focus on his own big announcement of the Trinity River Park, a $270 million plan for a riverfront park downtown.

“I read the citizens, and they want this,” Rawlings said, steps away from a 3D model of the proposed park. “Look, I’m a big baseball fan. I would love to have a [baseball] park. But you have to prioritize, what do citizens really want? And this is going to get a much better ROI than spending $900 million on a baseball stadium.”

The mayor also said Arlington had a big advantage in being able to tear up the current lease to Globe Life Park, making this a financial decision for the team. But Rawlings was also careful to leave the door open to a downtown Rangers ballpark in case Arlington can’t come up with the needed funding. 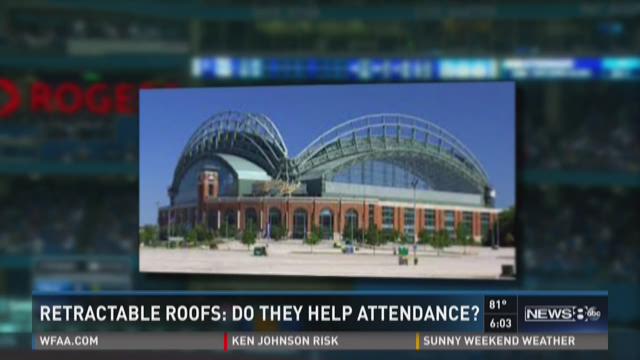 Six major league teams have retractable roofs. Last year, only one of them was in the top 10 for attendance.
That was Toronto, which had a great year.

When the Milwaukee Brewers opened Miller Park in 2001, attendance roughly doubled and has stayed high.

With the Miami Marlins it had less impact. Ticket sales rose when Marlins park opened in 2012, but numbers have slumped back to about where they were in the late 90s.

Seattle switched from a dome to a new stadium with retractable roof and saw attendance climb. But when the Mariners record dipped, so did ticket sales.

The Astros have drawn a lot more fans to Minute Maid Park than the old Astrodome.

But the Arizona Diamondbacks, who have always had a retractable roof, haven't outdrawn the Rangers since 2008.