If voters approve a new stadium for the Texas Rangers, the existing ballpark will be preserved and repurposed rather than demolished, according to the mayor and the team. 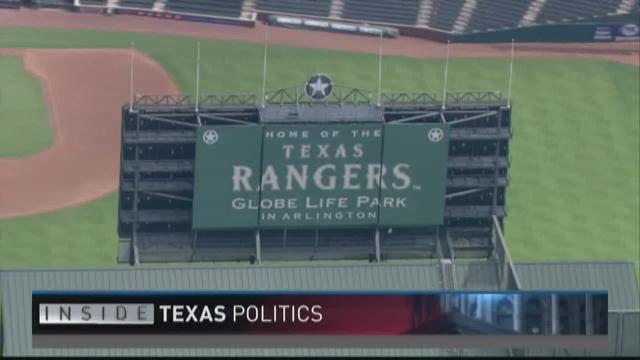 If voters approve a new stadium for the Texas Rangers, the existing ballpark will be preserved and repurposed rather than demolished, according to the mayor and the team.

“The ballpark will not be bulldozed,” said Arlington Mayor Jeff Williams during an appearance on Sunday’s Inside Texas Politics.

The future of Globe Life Park was never fully known until this morning when the Rangers and the city made the announcement on WFAA’s political program.

The outfield and concourses will likely be retail, dining, and commercial offices while the field itself might be repurposed into a public park or amphitheater, said Mayor Williams.

In a lengthy statement to Inside Texas Politics, Ray Davis, Co-Chairman & Managing Partner of the Texas Rangers, said:

“It is the Rangers’ intent to preserve the beautiful exterior façade of Globe Life Park. We’ve been working closely with the Cordish Company to find ways to repurpose the building. The Centerfield Office Building is at capacity with tenants and we hope those companies will remain. Our existing retail store and the Hall of Fame space can both be used as retail spaces to support the development on the south side of Randol Mill Road. As plans for a new ballpark development evolve, we believe the interior of the ballpark could be refitted for another purpose while still providing options for additional development. We don’t need to have all of these answers today. However, I want to be clear that we can develop the solutions while still maintaining the aesthetic and character of this beautiful building.”

“The concourses are what really fit well for retail, restaurant, convention center space and then you look at the field itself and it’s not hard to envision park and festival spaces that could be there,” said Mayor Williams.

The Hall of Fame Museum “could be repurposed for incubator-type offices which there is a high demand for now,” the mayor added. “It’s all conceptual now but the big push has been – and the Rangers said this in the original press conference -- that they wanted time to be able to study the opportunities.”

The city owns Globe Life Park but the Rangers are responsible for all the maintenance while occupying the ballpark.

If the Rangers redevelop part of the existing park, the mayor said the city would collect the rent from any leases the team signs.

“Of course, we could sell it to them, we could rent it to them but be assured we are in this to make money for our citizens,” added Williams.

In November, the city and the Rangers are asking voters to shift a half-cent sales tax from the Cowboys stadium to fund a new ballpark for the Rangers.

It’s uncertain how Sunday’s news might impact the opposition to the new stadium.

“It’s a smart thing to do. The repurposing of this new ballpark. It’s not only going to be still standing it’s going to make money for the next generation,” said the mayor.