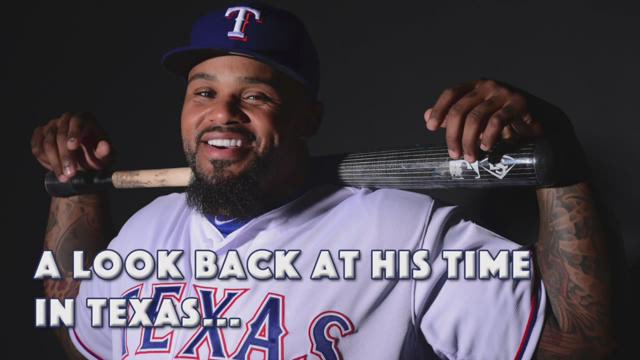 “Doctor’s told me that [because of] two spinal contusions, I can’t play Major League Baseball anymore,” he said, tears welling in his eyes.

Fielder was at a point where it took “too much brain” to walk in a straight line, he said, referring to a recent visit to the doctor.

“I was thinking, how am I going to hit a fastball tomorrow?,” he said.

Once one of the most durable players in the game, Fielder hangs up his cleats after an injury-riddled two-and-a-half seasons with the Rangers.

He was in the midst of his worst season as a pro in 2016, batting just .212 with eight homers and 44 RBI in 89 games. But while he’s stepping off the playing field, he isn’t stepping too far away from it.

“I’m still going to be with the fellas,” he said. “They’ve still got work to do, I’ve still got some cheerleading to do.”

His teammates joined him in the interview room to show support during Prince’s announcement.

Fielder, who delivered the speech in a neck brace, fought back tears from behind the podium.

“I thought I was just going to cry in the car,” he said.

His boys, Jadyn and Haven, who he said were an inspiration for him when he was told his career was over, joined him behind the microphone.

“They never allowed me to feel bad,” Fielder said. The two were playing video games when he told them he wouldn’t be playing baseball anymore.

“They never broke stride. They just asked me to come play video games. I’m so proud of them for being that strong for me at that time.”

Fielder ends his career with a lifetime .283 batting average, 319 home runs and 1,028 RBI. Naturally, he was asked if a return to the game in a coaching or front office capacity was a possibility.

“Not right now,” he said. “It might come across my mind later. I haven’t thought that far.”

Fielder is still owed $96 million on his contract, according to the Star-Telegram's Rangers beat writer Jeff Wilson. The Tigers, Fielder's former team, will pay $26 million of it. Another $36 million will reportedly be re-couped in insurance.

Watch the entire announcement below or here.