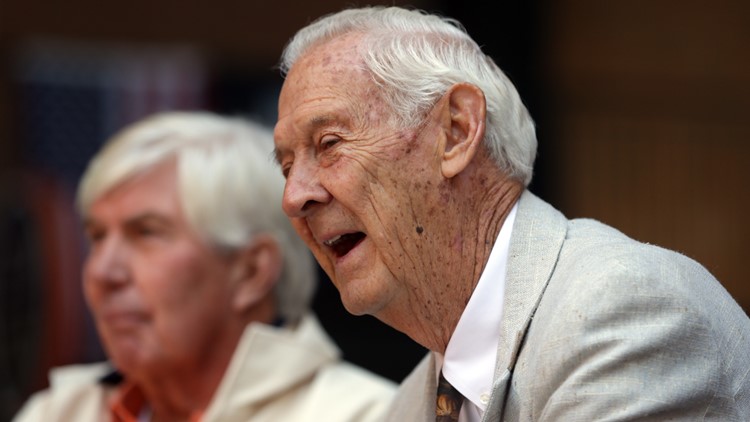 Photo by: Carlos Osorio/AP
Hal Naragon is seen during a ceremony to honor the 1968 Detroit Tigers team before the Tigers and the Minnesota Twins baseball game in Detroit, Saturday, May 25, 2013.

CLEVELAND — Hal Naragon, who became a hometown hero as a member of the Indians, has died at the age of 90.

Born in Zanesville, Naragon went on to graduate from Barberton High School before signing with the Tribe in 1947. After making his Major League debut in 1951, he joined the United States Marine Corps before returning to Cleveland in 1954.

That year, Naragon served as primary backup catcher to Jim Hegan on the Indians' legendary American League pennant-winning team that won a then-AL record 111 games. He worked with the famed "Big Four" pitching staff that featured Hall of Famers Bob Feller, Bob Lemon, and Early Wynn along with All-Star Mike Garcia, but the team was shockingly swept by the New York Giants in the World Series.

Naragon played parts of seven years with the Tribe and also spent time with the Washington Senators/Minnesota Twins franchise. In 10 big league seasons as a backup catcher, he hit .262.

"The Indians family is deeply saddened by the passing of Hal Naragon," team Senior Vice President of Public Affairs Bob DiBiasio said in a statment. "He will be remembered as a true gentleman, a great teammate and coach. Hal put the 'magic' in Barberton."

After his playing career ended, Naragon became a coach for the Twins and Detroit Tigers, winning another pennant with the former in 1965 and a World Series with the latter in 1968.