After getting sick this summer, 82-year-old Bill Carter continues to coach his Bobcats without setting foot in the gym. 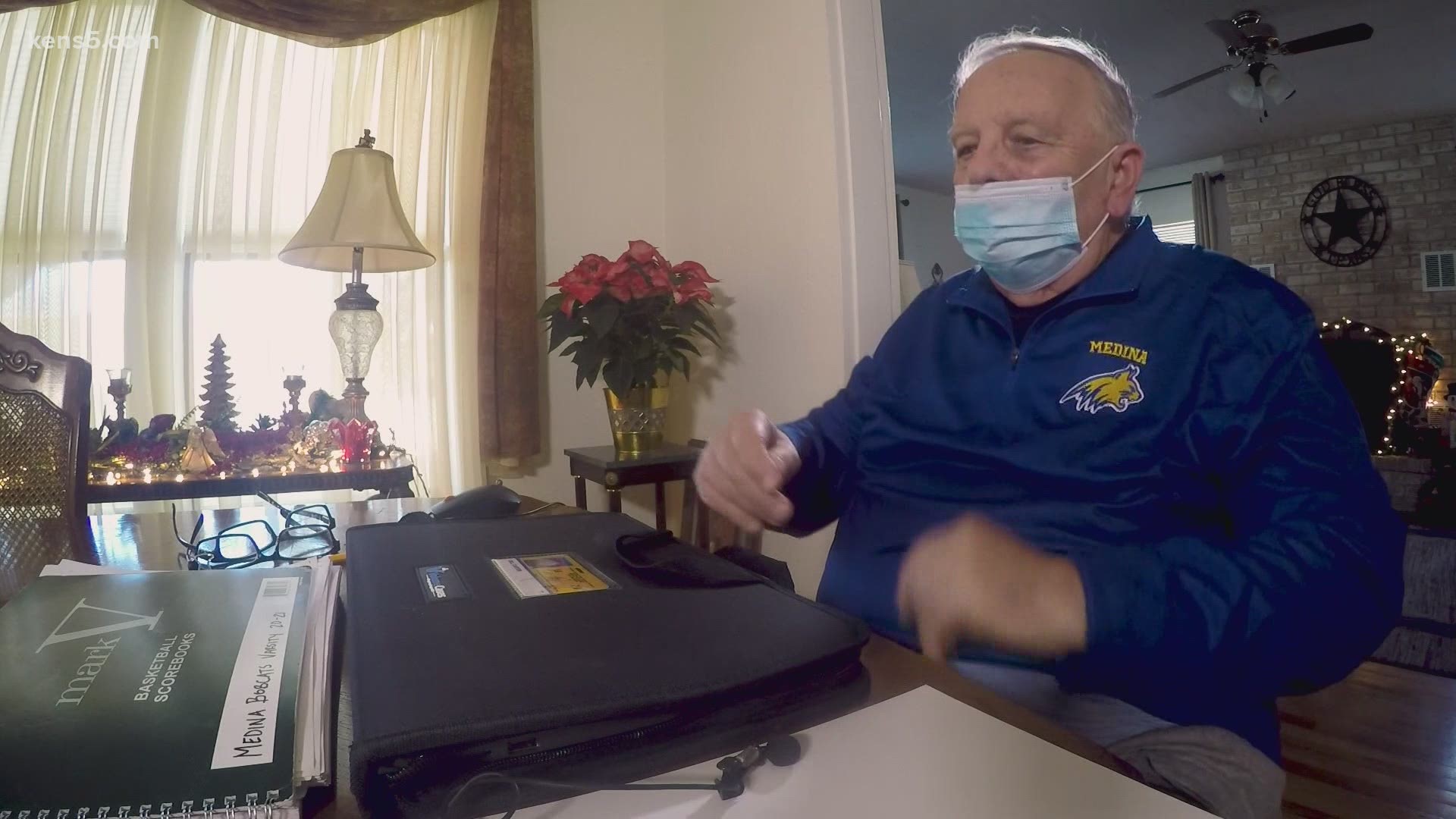 MEDINA, Texas — Just like many others during the pandemic, the Medina Bobcats are working from home.

Their home court is called The Den, but a case can be made it should be called The Living Room.

"Yeah, it's been a little different," Bobcats assistant and acting head coach Art de la Garza says with a laugh.

While de la Garza is the acting head coach during practices and games, head coach Bill Carter is still the man in charge from his home via Zoom and phone calls.

Senior Dakota Nelson added, "You know, I never in my life thought we (would have) a head coach (virtually) before, teaching us like that."

As you can imagine, the process has been frustrating at times.

Especially for a wife.

"Do I yell, Bonnie?" Carter says into the kitchen.

"Well, I try not to. The only reason I yell on Zoom is because I can't get anybody's attention."

"We'll be doing one thing, and if we do it wrong, we won't know that we did it wrong until like two minutes later because no one can hear (since) we're all yelling."

When it comes to games, he might not be the one calling timeouts, but he is pretty much doing everything else.

"My assistant coach, one of us is (on the bench) and one of them is on the phone and Coach Carter is calling, letting us know what he sees from Facebook Live and and still running the show from home," de la Garza said.

It is such an ordeal. Not only for the team, but for an 82-year-old with 40-plus years of head coaching experience at the collegiate and high school level..

"Most people...that is (of) sane mind would not be doing this," Carter said.

After a trip to the doctor this summer, it looked like his coaching days were over.

"In the second week in July, he told me that I had prostate cancer."

Thanks to chemotherapy and a collection of shots and pills, Carter's health continued to move in the right direction.

With the basketball season looming, in a pandemic, living with a compromised immune system—he had to make a choice.

"I decided I wasn't going to let this run my life," Carter said. "I don't get up in the morning thinking this is my last day. There's some days I feel like it is, but it's just I don't feel like that."

Credit: KENS 5
Medina puts a computer on the scorer's table and a player moves him around so he can watch practice.

It's not quite how he has done it his entire life, but there's nothing wrong with some creativity.

"It has been difficult, but...we've got a lot more done than I figured we would," Carter said.

These kids in The Den would love their coach at practice, but as long as he is home, in whatever room that is, they are happy.

"He has two types of cancer. He's fighting that and he still wants to come log into our basketball and watch us play, (watch us) miss our layups," Lichtenberg said.

Nelson added, "If it wasn't for him, I wouldn't be pushing myself as much as I was. And him just fighting his illness and still being able to come and, you know, coach us as our head coach really shows who he really is."