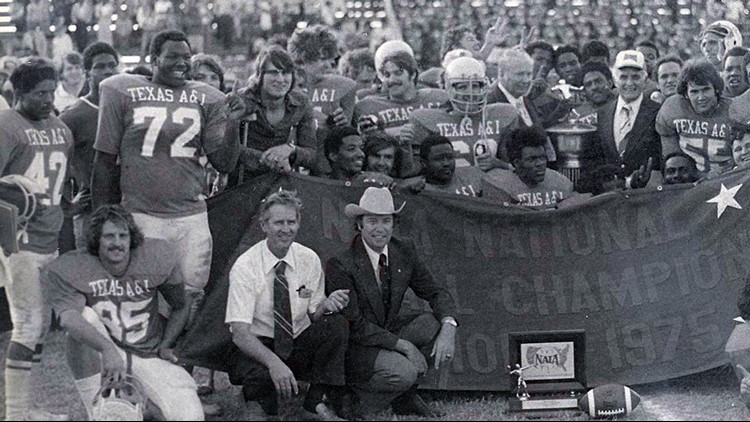 Photo by: Texas A&I Photo
Texas A&I offensive tackle Larry McFarland (No. 72) signals who is No. 1 after the Javelinas beat Salem (W. Va.) 37-0 in the NAIA Division I championship game.

SAN ANTONIO — Known as “Big Mac” by his teammates, Larry McFarland was a fierce offensive lineman on Texas A&I football teams that won three consecutive national championships and went undefeated during the mid-1970s.

McFarland, who played tackle, earned Little All-America honors in 1976 when the Javelinas averaged a staggering 569.1 yards a game in total offense and finished 13-0.

A 1973 Highlands High School graduate, McFarland died Thursday night in Corpus Christi after a long battle with diabetes. He was 63.

"He was a big teddy bear . . . sweetest guy in the world," said former A&I teammate John Martinez, who played on the offensive line with McFarland. "He was a big man with a soft voice, real easygoing. I don't think he had a mean bone in his body, but he was big, old lineman who could block.

"He was strong, big kid. He had real good feet for a big boy. But he was a nice guy, always nice to everybody."

McFarland's visitation is scheduled for 10 a.m. to noon Tuesday at Guardian Funeral Home, 5922 Crosstown, Corpus Christi, 78417. The chapel service is at 12:15 p.m. Tuesday, and burial will be at Seaside Memorial Park in Corpus Christi at 2 p.m.

McFarland's former teammates and coaches remembered his friendly disposition and the competitive fire that made him an outstanding player.

"He had a very outgoing, fun-loving personality," said Freddy Jonas, who was the Javelinas' defensive coordinator when McFarland played at A&I. "He just always would be smiling and laughing. He never was a downbeat person, and he always did a good job.

"You could rely on him. That's the main thing. You didn't worry about whether Larry would do the right thing, block the right guy, or do as good a job as could be done against whatever defensive scheme was there. He was a team guy."

Jonas marveled at how well McFarland, who played at 6-foot-3 and 280 pounds as a senior at A&I, ran for a big man.

"He had very good athletic ability for a lineman," Jonas said.

Former A&I running back Larry Collins, an Edison graduate who rushed for more than 5,000 yards during his stellar four-year with the Javelinas, played with McFarland for three seasons. Collins and McFarland were second cousins.

"Besides being a great football player, Mac was a gentleman," Collins said Friday morning. "Everybody respected him. As a football player, he was a great athlete. When we would call certain plays, for me to get around that corner, Mac would be leading the way. For a guy that weighed 280 pounds, he was light on his feet and was a great runner."

Collins, who lives in the Rio Grande Valley, visited McFarland in the hospital recently.

"We had a great visit," Collins said. "He was in good spirits. As sick as Mac was, he was still a fighter."

Texas A&I, now Texas A&M-Kingsville, finished 2-8 in McFarland's freshman season. When the Javelinas beat rival Southwest Texas State in their 1973 finale, no one could have imagined the heights A&I would reach in the three seasons that followed.

The Javelinas won 42 consecutive games before the streak ended with a 25-25 tie against  Abilene Christian in a 1977 Lone Star Conference game.

McFarland earned first-team All-LSC honors as a junior and senior. He was a captain of the 1976 squad.

"I remember Big Mac and Martinez because I had to watch their weight all the time," said Ron Harms, who was A&I's offensive coordinator in 1974 and 1975 and coached the offensive line. "I weighed Larry and Johnny every Sunday to make sure they would keep their weight.

"Big Mac was just kind of a gentle giant. He never said a whole lot. Did his work and was an outstanding football player. He was a great guy to work with and there were never any problems with Larry at all. Just a polite guy . . . did what he was asked to do and did a great job of it."

Harms played a key role in the Javelinas' turnaround in 1974, persuading head coach Gil Steinke to go to the veer offense that was a perfect fit for sophomore quarterback Richard Ritchie. Steinke, Harms and Ritchie, who went 39-0 as A&I's starting quarterback, are all in the College Football Hall of fame. Steinke died in 1995.

Ritchie said the influence McFarland had on his teammates as a strong leader was just as important as his performance on the field.

"Never had to worry about Big Mac," Ritchie said Friday night. "Big Mac was going to be there. He was never in trouble. He's a big reason why we won. Big reason. He kept everybody together. He was one of those guys who kept people together that some of us couldn't reach. Big Mac would reach out to them.

"Besides that, he was an unbelievable athlete. I played basketball with that guy and you're going, 'Holy moly.' He was such a great athlete. He was a big guy, but he could move and run. He was in shape, but he didn't look like he was because he had that weight."

Harms kept tabs on McFarland during his illness and learned of his death through social media.

"I know Larry suffered a lot in his latter years," Harms said. "I'm sure he's at peace, and I'm sure that he's in the right place."