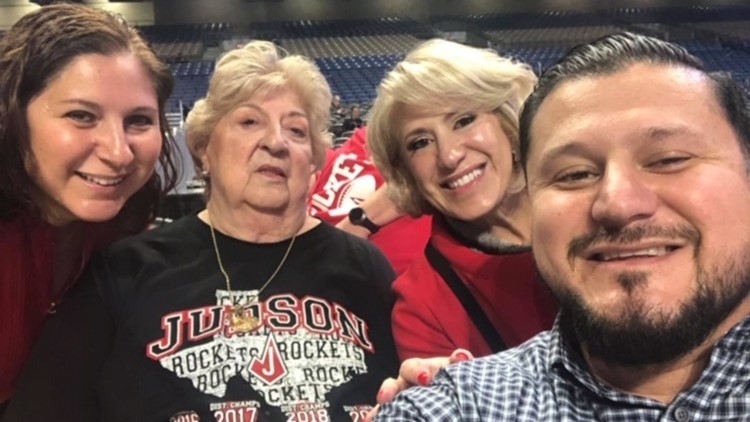 SAN ANTONIO — This winter has been the best of times and the worst of times for Judson girls basketball coach Triva Corrales.

After leading the Rockets to their first state title last year, Corrales has them positioned to make another playoff run and compete for a fourth consecutive appearance in the state tournament.

But while Judson raced to its fifth straight district title, Corrales saw her life turned on its head Jan. 26, when her mother was admitted to St. Luke's Hospital with a serious illness. Three days later, Evangeline Corrales had emergency surgery to treat an abdominal abscess.

Corrales, who turned 80 on Feb. 11, spent two weeks in intensive care before before being moved to a cardiac telemetry unit when her condition started to improve. Monday was Corrales' 23rd consecutive day in the hospital.

"It's been tough," Triva Corrales said. "She's doing a little bit better, but it's just going to take some time. She has a long recovery ahead of her."

In her 10th season as Judson's head girls basketball coach, Corrales will be on the sideline Tuesday when the Rockets (28-8) play Austin Stephen F. Austin (21-12) in the first round of the Class 6A playoffs. Tipoff is at 6 p.m. at the Seguin High School gym.

Sleeping in a chair in her mother's hospital room every night for more than three weeks has taken a toll on Corrales.

"This has tested every single emotion, to be honest with you, because we've had so many ups and downs these past 22 days," Corrales said. "We almost lost her. It's been such a tough surgery. Sometimes she goes forward and sometimes backward during the healing process.

Judson girls basketball coach Triva Corrales, talking with senior guard Kyra White during the Class 6A state semifinal against Allen on March 1 at the Alamodome, has led the Rockets to the state tournament each of the last three years.
Photo by Antonio Morano bit.ly/XR79FT / Special to KENS5.com

"The lack of sleep has been hard on me. Sleeping on a chair every single night is rough. In the hospital, they come in every hour and you can't really get any sleep, so I'm sleep deprived. But I have to maintain my focus because these kids need me."

Corrales is the youngest of three children born to Evangeline and Albert Corrales, now deceased. With her sister, Tracey, and brother, Trey, living in Bastrop and North Carolina, respectively, it fell on Triva to be with their mother at the hospital every day.

"I just go to practice and come back to the hospital, practice and the hospital,' Corrales said. "I don't really go home. I stay at the hospital all through the night. I pack a suitcase every Sunday and I put six days' change of clothes in there, and then I leave (the hospital) in the morning about 5, and I go to school and shower there."

After meeting with her coaches at 6, Corrales is on the court for the Rockets' daily practice from 7 to 9 a.m. Before she heads back to the hospital, Corrales spends about an hour after the workout to handle her duties as Judson girls athletic coordinator.

"I usually get back to the hospital at 10, 10:30," Corrales said. "The assistant coaches have been very helpful. Teachers have been very supportive, and our principal (Jesus Hernandez) and superintendent (Judy Ball) have been amazing."

"The players know what I'm going through. I try not to show them too much because I don't want them to think that there's anything out of the norm. But I think they know and I think that's actually motivated them to work even harder and play even harder, because they know how I'm handling the adversity and that means they should be able to handle whatever they're facing."

Her mother's long hospital stay has been a journey of self-discovery on different levels for Corrales, 44.

"It puts basketball in perspective, on the back burner," Corrales said. "I have this mentality of wherever I'm at, I'm going to be all there. If I'm in the gym, my mind is not going to be in the hospital.

"It is a pressure release for me to go to the gym, because it's what I love. It feels good because it gives me some normalcy because this is not normal, staying in this hospital."

"Some coaches take their foot off the gas pedal when the playoffs start, but we don't," Corrales said. "Practices are even more intense. They may not be as long, but they're intense. We run them.

"Our goal is to make practice harder than a game. That's what I try to get out of them. They understand what's at stake. We went to the state tournament three times trying to win it. Trying to get back to the opportunity just to play in the championship game is the toughest part. Just to get there is very hard."