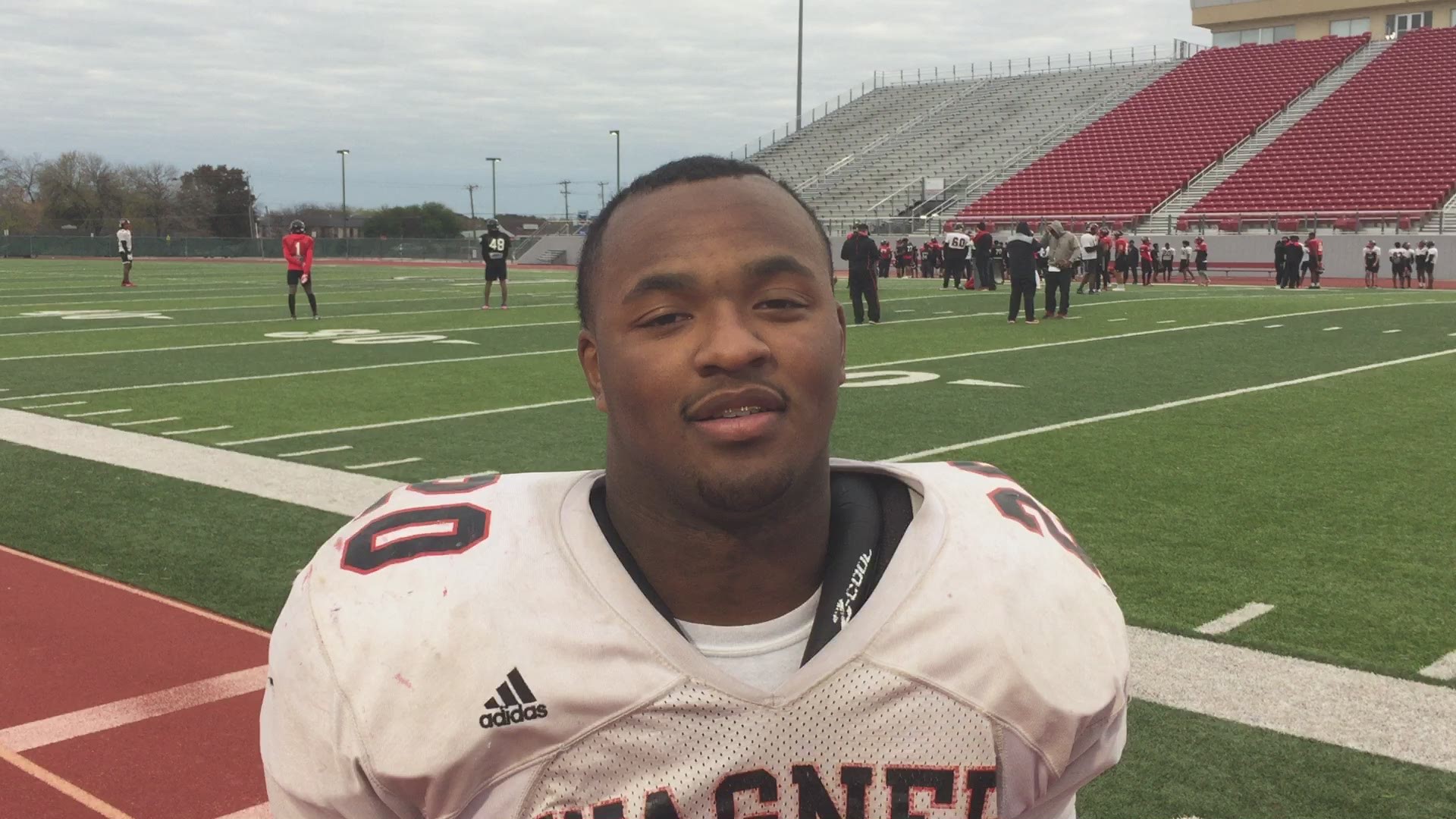 Class 5A Division I state quarterfinals

SAN ANTONIO – With all due respect to prolific Mission Veterans Memorial quarterback Landry Gilpin, the biggest challenge for the Wagner Thunderbirds in the Class 5A Division I state quarterfinals might be having to wake up earlier than usual on game day.

Meeting in the first game of a playoff tripleheader at the Alamodome, the Thunderbirds and Patriots kick off at 10 a.m. Saturday.

To hear the Thunderbirds tell it, the early kickoff won’t be a problem for them. After all, the Patriots are getting an early wake-up call, too.

“It’s just another game,” Wagner sophomore running back L.J. Butler said Wednesday. “We’re prepared to get up early and make the sacrifice for what we’re trying to accomplish.”

“It’s early, but it’s playoff time,” Bruce said. “If you plan to be doing what you want to do, you’ve got to get used to playing in the morning.”

The 5A Division I state final is scheduled to start at 11 a.m. on Saturday, Dec. 22, at AT&T Stadium in Arlington.

Wagner (12-1) has no illusions about the formidable challenge Veterans Memorial (12-1) and Gilpin, a senior, will present.

“Their quarterback is very dynamic,” Bruce said. “He makes them go. He’s very good at extending plays. He’s very good at finding open receivers, but he’s also phenomenal at running the ball. We’ve got a big task at hand on controlling him.” 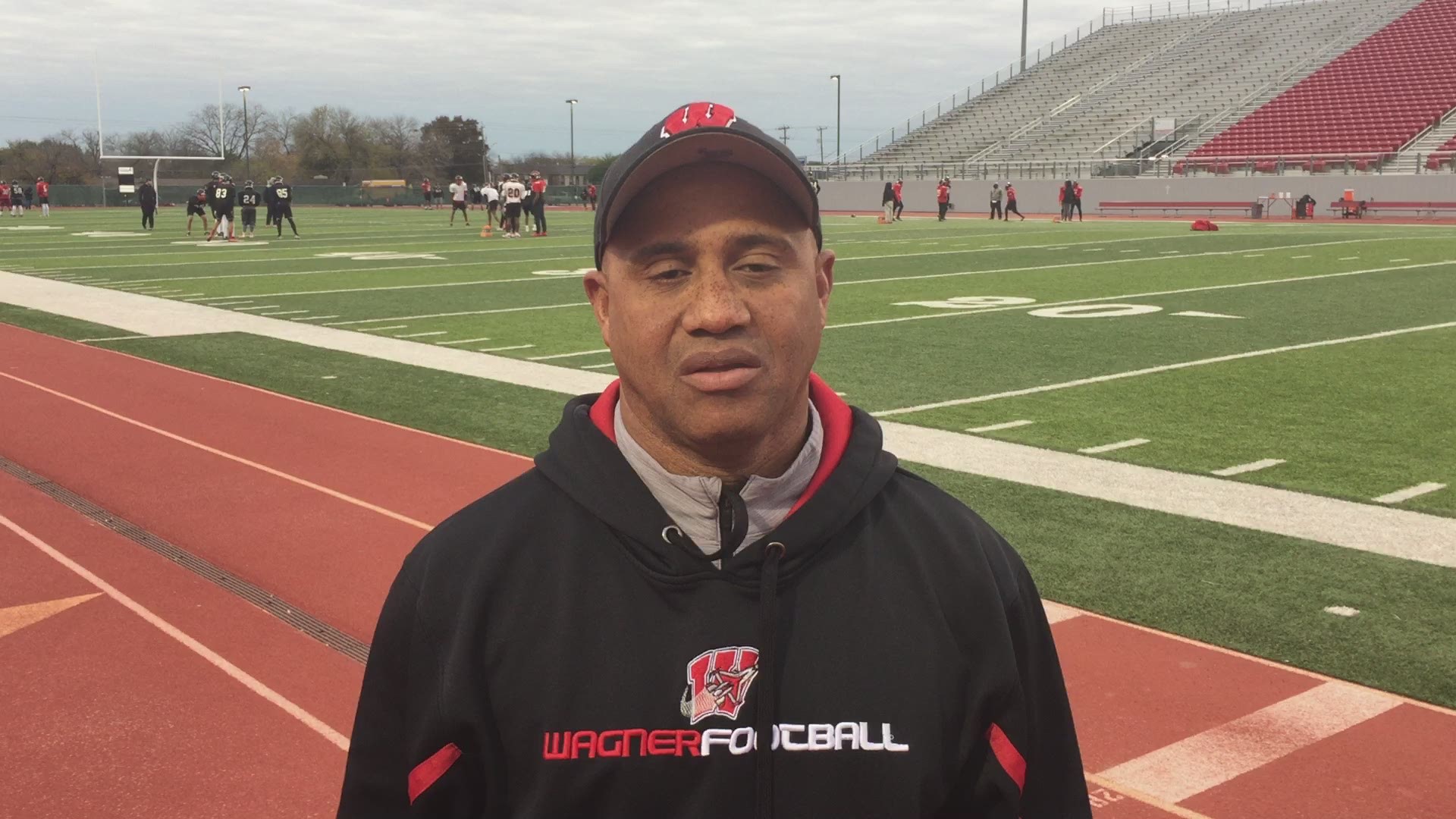 Gilpin’s father, David, is the Eagles’ head coach. Given his leadership and command of the offense, Landy is like a coach on the field.

Gilpin completed 21 of 46 passes for 434 yards and five touchdowns in the win over Corpus Christi Veterans Memorial, and rushed for 270 yards and two more scores.

In the midst of a historic season, Wagner is one win away from reaching the state semifinals for the first time since it opened in 2005. The Thunderbirds, who played their first varsity season in 2006, won their first district championship this season. They also have set a program record for the most victories in a season.

Wagner’s 2010 team reached the state quarterfinals after making the playoffs as a fourth-place team. The Thunderbirds finished 7-7 after having their run stopped by Stevens.

The Thunderbirds have won 11 consecutive games since losing to Judson ISD rival Judson 35-28 in their annual Hammer Bowl. Wagner crushed its eight District 13-5A Division I opponents in rolling to the league championship, outscoring them 522-29 and pitching five shutouts. The Thunderbirds were the highest-scoring 11-man team in the state during the regular season.

Senior cornerback Javon Barnes (21) is one of the defensive leaders for a Wagner team that will play Mission Veterans Memorial in the Class 5A Division I state quarterfinals Saturday at the Alamodome. Photo by Miguel Esparza / Special to KENS5.com

Wagner opened the playoffs with a 59-7 rout of Harlandale and pulled away from Corpus Christi Ray for a 56-17 second-round victory in Corpus Christi. The Texans stayed with Wagner for a little more than a quarter before the Thunderbirds seized control with a 28-0 run that put them ahead 42-10 with 10 minutes left in the third quarter. Wagner was up 35-10 at the half.

As dominant as Wagner has been this season, and considering it lost to unbeaten Judson by only seven points, an argument could be made that the Thunderbirds are the second-best team in the San Antonio area – regardless of class.

“I think we could have been good, even in the class we were in,” Butler said. “We’re the same team. We’ve just been working hard since the end of last season. We’ve been working harder and making sure everything is right. It’s been a grind.”

Wagner hadn’t made the playoffs since 2012, going 13-37 in the ensuing five seasons. The skid began with an 0-10 finish in 2013, Bruce’s first season as head coach. The Thunderbirds went 4-6 last season for the second year in a row.

Wagner has a dynamic quarterback of its own, senior Tobias Weaver, a dual-threat operator who has started for the last two seasons. Weaver and Butler, who has rushed for 1,701 yards and 28 TDs this season, give the Thunderbirds one of the best backfield tandems in the state.

Given the way the Wagner offense has overwhelmed defenses for most of the season, Veterans Memorial could have a hard time staying close to the Thunderbirds.

While teams from the Rio Grande Valley traditionally have fared poorly against San Antonio-area opponents, Bruce remains wary of the Patriots.

“It’s round four,” he said. “Any team that plays is going to be good, no matter where they’re from. This Valley team plays very hard, plays very tough. They play to the end. They don’t take plays off. It’s going to be a very competitive game Saturday morning.”