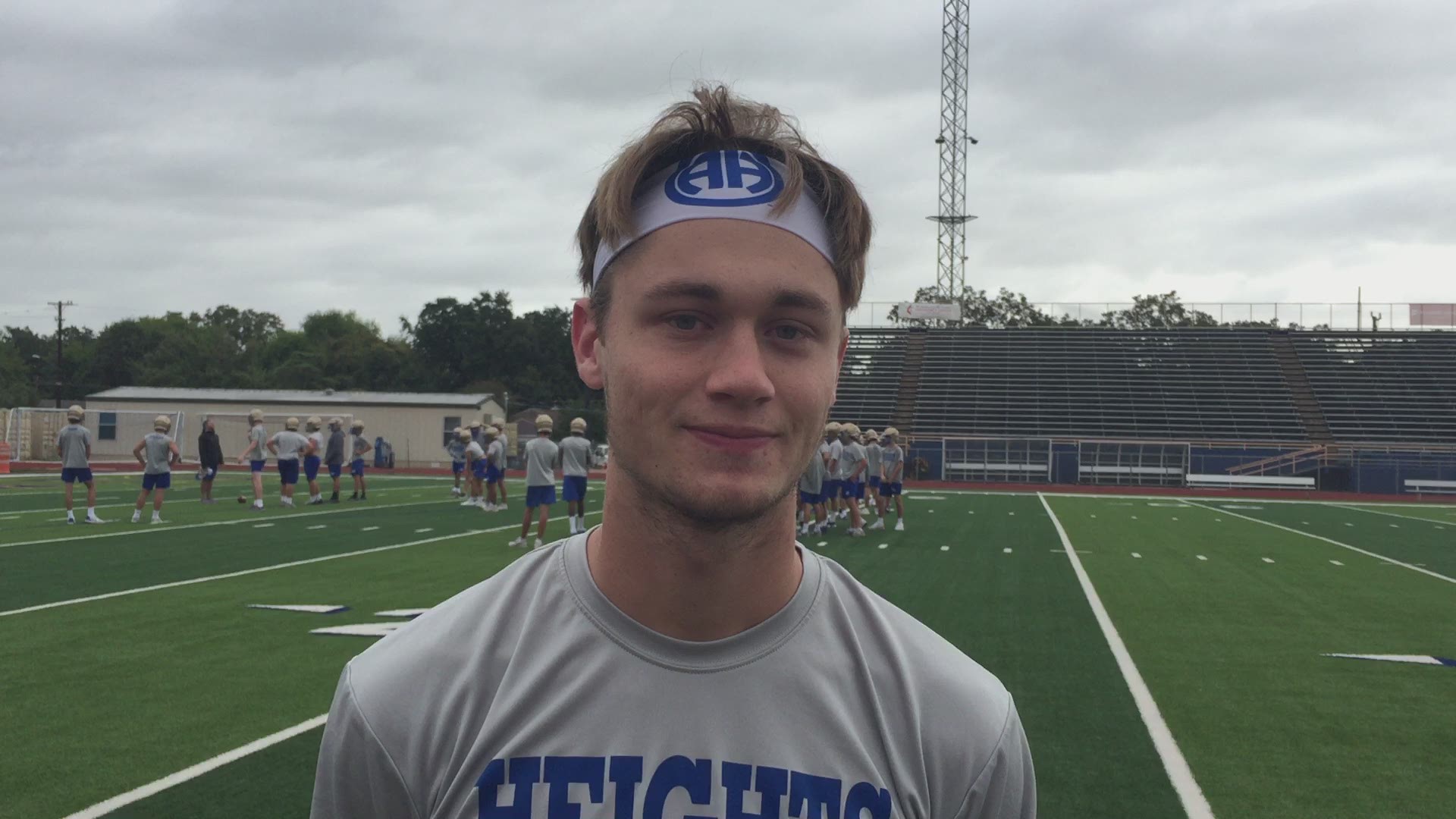 SAN ANTONIO — Koby Love was a backup to Alamo Heights senior quarterback Reed Andersen last year when Kerrville Tivy eked out a 64-62 victory against the Mules in a triple-overtime thriller.

Now a senior, Love will be a little more personally involved Friday night when Heights plays Tivy in a key District 14-5A Division II game in Kerrville.

After watching Andersen run the Mules' offense for two seasons, Love became the team's starting quarterback this year and has improved with each game. He shifted to another gear last week in a 56-49 win against Lockhart, completing 45 of 74 attempts for 516 yards and seven touchdowns.

Love overcame four interceptions to have his most prolific night of the season and help keep Heights in the thick of the district race. Love had only two attempts picked off in the first six games of the season.

Love's 74 passing attempts rank No. 2 in state history. Tivy's Johnny Manziel, who went on to win the Heisman Trophy at Texas A&M, threw the ball 75 times in a loss to Madison in 2010.

Love's seven TD passes rank second in area history, trailing the eight thrown by Josh Green and John Free, both of Boerne Champion. Green had eight scoring strikes in a 70-66 playoff victory against Georgetown in 2015, tying the record set by Free in a 66-42 playoff win against Port Lavaca Calhoun in 2010.

"I was definitely disappointed in myself. I should have run the ball a few times when I passed it, and there was a time when a receiver and I miscommunicated."

Heights will need another big game from Love when it takes on Tivy, which is No. 2 in the KENS5.com Sub-6A area rankings. The Antlers, who have gone unbeaten since losing to Dripping Springs by one point in their season opener, are 6-1 overall and 4-0 in district.

Unranked Heights (3-4, 3-1) is third in the standings, a half-game behind second-place Boerne Champion (7-1, 4-1). Champion, No. 3 in the KENS5.com rankings, lost to Tivy in its district opener and plays Heights on the final Friday of the regular season.

Love threw TD passes of 1 and 5 yards to Bennett Voorheis to rally the Mules from a 14-point deficit in the final two minutes. Phong Bien's extra-point kick after Voorheis' third scoring reception – he had an 8-yard TD catch in the second quarter – tied the game at 49 with 15 seconds left in regulation. Heights won the game on Aaron Proctor's 3-yard run in OT.

Mules coach Mike Norment liked the way Love kept his poise and hung tough during the ebb and flow of a close game.

"We put a lot on our quarterback and he did a great job," Norment said. "We don't go into a game saying that we're going to run the ball or throw the ball that many times. But the situation was what Lockhart's defense was doing, so we were kind of forced to throw the ball.

"They put a lot of people on the line of scrimmage, and they were trying to force us to throw. And, fortunately, that's something we work on a lot. So, we were able to do that. Koby threw some interceptions and it was tough, but he never let it get to him and he came and kept making the throws."

Inspired by Love's resilience, the Mules refused to fold after Lockhart went ahead 49-35 on an 86-yard run by Daetron Ellison with 3:26 left.

"Koby did a great job of staying in the game and so did the team," Norment said. "They never got down. They just kept playing and we were able to come out with the victory."

Norment did his part to keep Love from getting down on himself after throwing multiple interceptions in a game for the first time.

"We tell Koby that when you throw that many times, I don't care if it's Bret Favre or Tom Brady or Koby Love, every now and then, something bad is going to happen," Norment said. "I know Darrell Royal is rolling over in his grave, but football has also changed."

Legendary Texas coach Darrell Royal famously said that three things can happen when you throw the football – and two of them are bad.

Love also had TD passes of 36 and 10 yards to Proctor, 6 yards to Blake Burke and 39 yards to Joseph Moreno. Love and the Mules were at their best in the final two minutes of regulation and the overtime period.

"The whole team, we tell them, 'This is what we're going to do.'" Norment said. "We tell them to get out of bounds. First downs stop the clock. We've got to go fast. Let's go. And then we came down and scored. Then we didn't get the onside kick. But the defense had to make a stop and we had to use our timeouts correctly, and we did.

"We had to have a good return on the punt, which we did. We were able to come back and were able to tie it up. Then when we go into overtime, defense had to make a big play and it did, caused a fumble. Then we went in and scored. Everything – special teams, offense and defense – all came together for us to get the victory."

Burke finished with 18 receptions for 162 yards, tying former Clark receiver Kyle Ingraham for No. 2 in area history for most catches in a game. Champion's Chayce Bolli set the record with 21 receptions in 2016.

The win over Lockhart gave Heights back-to-back victories for the first time this season. The Mules had an uncharacteristically poor start, going 0-3 and losing four of their first five games.

Heights routed Kennedy 58-0 in its district opener but lost to Uvalde 24-21 the next week. The Mules bounced back with a 49-7 blowout of Memorial before edging Lockhart.

"That's probably the strength of this team – they really never got down," Norment said. "We've never really had to get after them or push them to have a good practice. It's not like they got down or started to give up. That proved to be huge for us against Lockhart because we could have given up after we went down by two touchdowns late in the game."