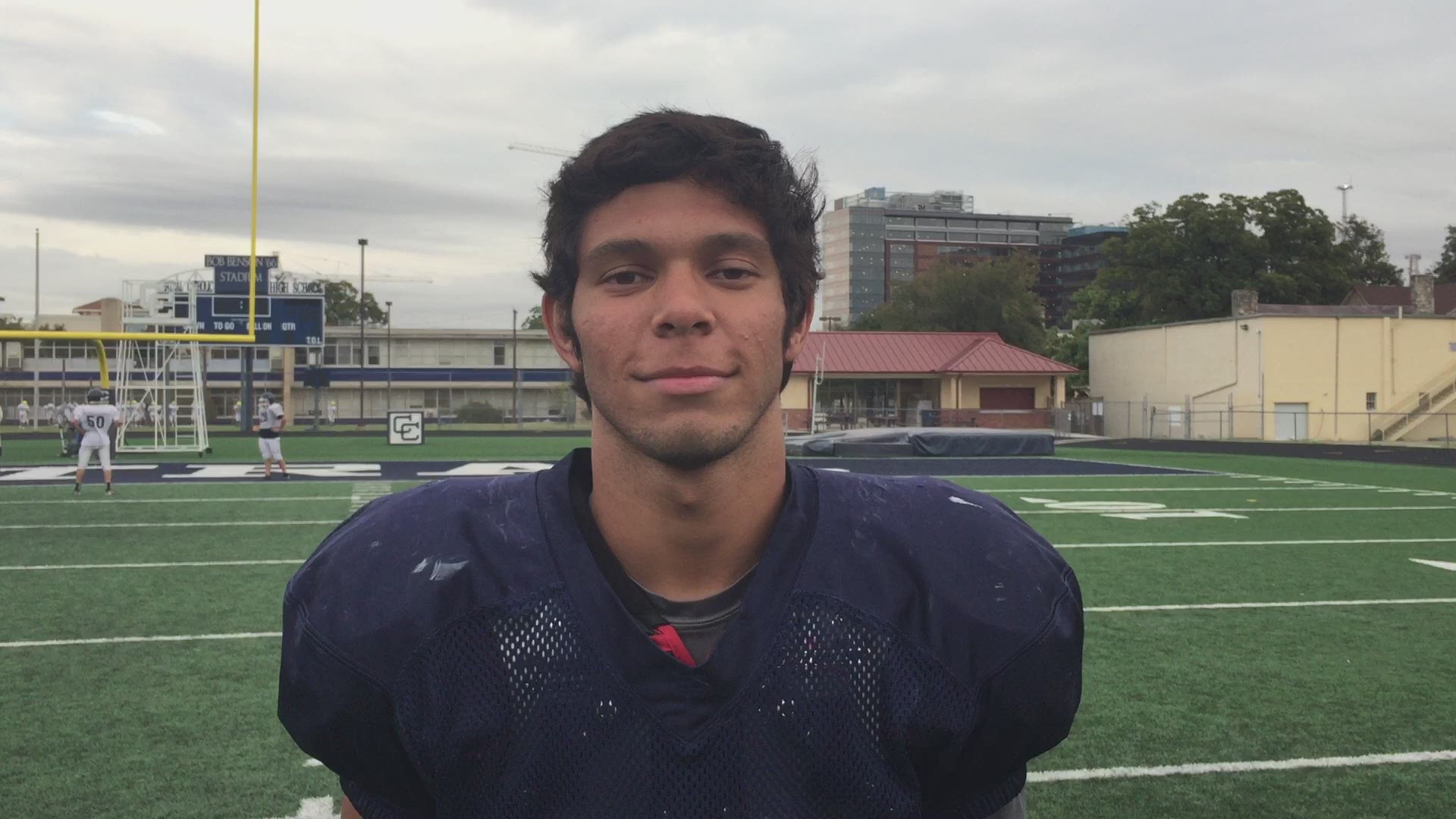 SAN ANTONIO — Maybe it's a good thing the Central Catholic football team has a bye this week.

Senior tailback Gibby Garza could use the rest after rushing for 301 yards and four touchdowns on 14 carries in the Buttons' 56-27 victory against Houston St. Pius last Friday night.

Garza was named the winner of the Built Ford Tough Player of the Week trophy for the state's private schools after averaging a whopping 21.5 yards per carry in Central's TAPPS district opener.

Ford names players of the week in five UIL classes – 6A, 5A, 4A, 3A, 2A  and the private schools – during the regular season.

Receiving individual accolades is nothing new for Garza. A slotback last year, he earned second-team All-State honors after finishing with 62 receptions for 722 yards and five TDs. He was a backup running back on the varsity as a sophomore and moved back to his former position in the offseason

"Coming into this year, we knew we were going to move him to tailback, which is his natural position, I think," Central coach Mike Santiago said.

Garza's transition has been seamless. He leads TAPPS in rushing and scoring this season with 1,098 yards and 108 points.

Credit: David Flores / KENS5.com
Central Catholic senior tailback Gibby Garza, one of the most productive rushers in the San Antonio area, has run for 1,098 yards and 16 touchdowns this season.

Santiago was succinct when he was asked what Garza does well: "Everything."

The Houston St. Pius defense could attest to that.

Central (4-3) jumps back into the season next Friday at Houston St. Thomas.

While the Buttons are idle this weekend, Judson and Smithson Valley will share the spotlight Friday night when they meet in a key District 26-6A game at Rutledge Stadium

Garza is as modest as he is talented on the field, deflecting credit for his Ford award to the teammates who blocked for him.

"The O-line, really everybody, did a great job," Garza said. "They blew open some holes for me. It was a nice offensive game for us. We all came together as a team. Our defense pulled through a lot. It was nice to have an overall team win. It was a big win, especially since it was our first district game."

Credit: David Flores / KENS5.com
Central Catholic coach Mike Santiago, who is in his third season with the Buttons, moved Gibby Garza back to tailback this year after he played slotback last season.

Central is in its third season under Santiago, whose long career includes head-coaching stints at Stephen F. Austin and UIW.

"I think all of our players have adjusted well to Coach Santiago," Garza said. "He teaches us a lot of new stuff. All the players are open to coaching, which is very nice to have."

Put it all together and Garza has racked up 1,717 all-purpose yards and scored 18 TDs.

Garza's game last week was his second-most prolific, yardage-wise, of the season. He gashed Seguin for 233 yards and four TDs on 34 carries in a 51-43 victory over the Matadors on Sept. 13.

"He's not going to go down with one hit," said Buttons running backs coach Marshall Weinkam, who graduated from Central in 2010. "He's going to make somebody miss. Whether it's a spin or juke, it doesn't matter. He'll run it, he'll catch it, do literally anything you ask him to do."

Besides being deceptively strong for his lean frame, Garza is cat-like quick and has a breakaway speed that makes him a threat to go the distance every time he touches the ball. Garza also has an uncanny knack for making defenders miss him.

"He's a physical runner if you watch him," Santiago said. "I mean, you don't run for 1,000 yards in seven games and you're not physical enough. He's got no problem lowering his shoulder I love the kid.

"If I was the head coach at Stephen F. Austin or UIW right now, I'd look at recruiting this kid. I'd look at signing him to a scholarship. I get the point that you fall in love with your guys, but this guy is a football player."

To hear Central's offensive linemen tell it, they're having as good a time blocking for Garza as he is torching opponents for big chunks of yardage.

"I just tell him every time before we go in, 'Hey, if you're coming up right behind me, grab on and I'll lead you through,'" senior right guard Zach Holm said. "I love blocking for him."

"He can just take a hit," he said. "He runs track so he's fast and is a good athlete all around. He's real good at making people miss. He just keeps on running."

"All those guys did a great job against Houston St. Pius," Santiago said.