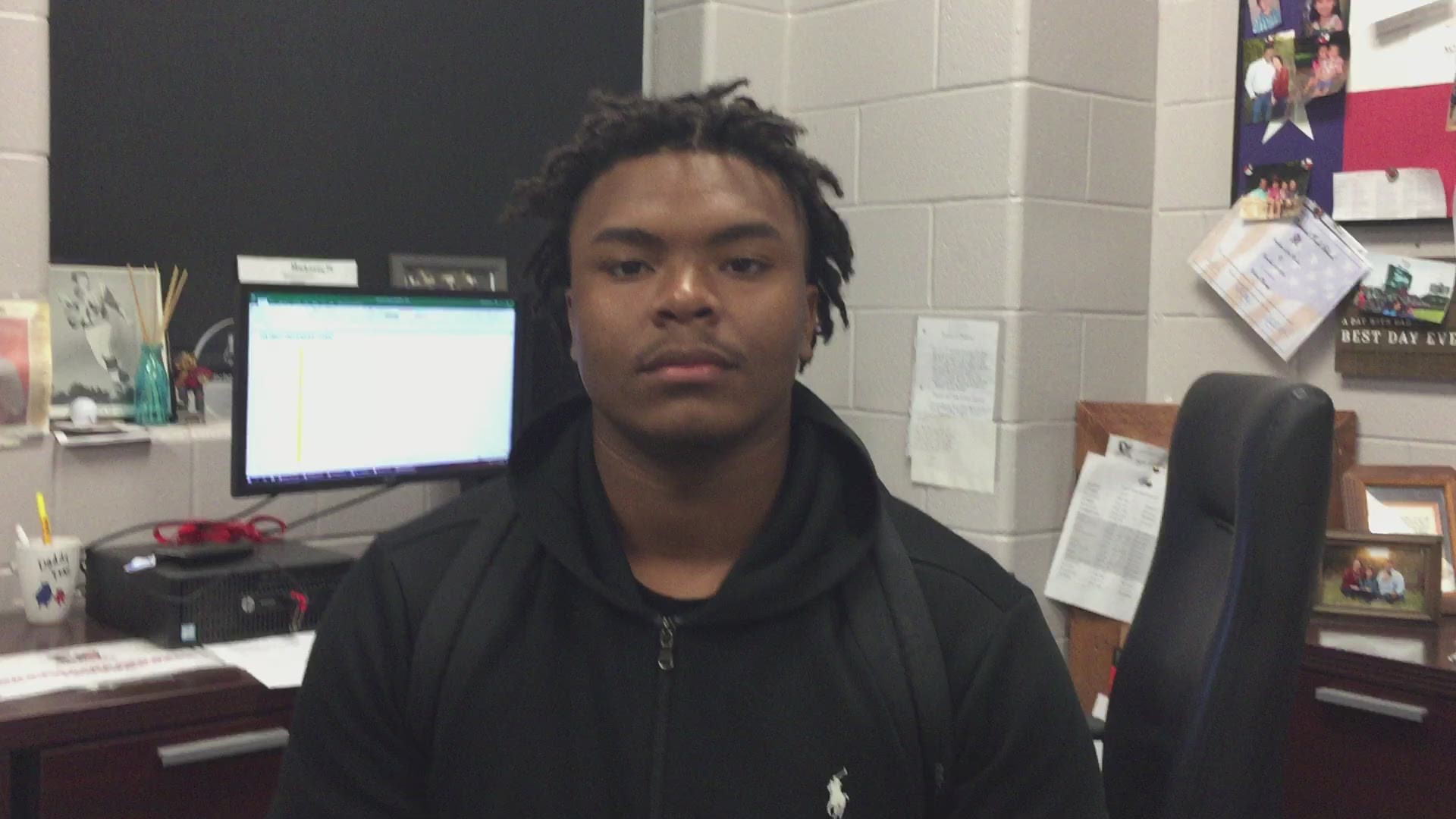 SAN ANTONIO — To hear Veterans Memorial football coach Richard Mendoza tell it, senior Dresden McIver-Brown can do just about everything on the defensive line.

McIver-Brown was a freshman when Veterans Memorial, the third high school in the Judson ISD, opened in 2016. He has seen the Patriots grow from a sub-varsity team to a district title contender in four years.

"He's been with us for four years, from when we started this school and this program," Mendoza said. "He plays every position on the defensive line, depending on what offensive scheme we're seeing. He can play a lot of different places, but the thing that makes Dresden such a unique player is he's such a great kid.

"He's not a kid anymore. He's a great young man. Comes from a great family. We're awfully proud of him and his leadership, and how he's developed over the last four years."

McIver-Brown is one of the linchpins on a Veterans Memorial defense that has yielded only 48 points and pitched two shutouts in six district games this season.

The Patriots will face the challenge of trying to slow down an explosive Wagner option offense Friday night when the Judson ISD rivals meet in a showdown for the District 13-5A Division I title.

A large crowd is expected to jam into Rutledge Stadium to watch defending district champ Wagner, No. 1 in the KENS5.com Sub-6A area rankings, play No. 5 Veterans Memorial for only the second time.

"A lot of intensity, a lot of focus to make sure we do our jobs and just trust each other," McIver-Brown said, talking about the Patriots' mindset heading into Friday night's game. "Make sure we compete and do well."

Wagner, 8-1 overall and 7-0 in district, and Vets Memorial (7-1, 6-0) have dominated their league the last two seasons. Friday's game will be the last of the regular season for the Thunderbirds, who have an open date next week.

Wagner routed the Patriots 56-7 last year, Veterans Memorial's first varsity season, and went on to finish 13-2 after falling in the state semifinals.

Vets Memorial, the runner-up to Wagner in last year's district race, reached the second round of the playoffs and went 8-4. The Patriots played a sub-varsity schedule in their first two seasons.

Led by Mendoza, a former Judson quarterback, Vets Memorial has made building a program with a strong foundation priority No. 1.

McIver-Brown has embraced the challenge of growing with the Patriots' fledgling program.

"It's been a lot of pushing each other to make sure we do better," he said. "It's always been fun. I really liked it since the beginning. It's just made us better as people since day one.

"We have this thing -- earn everything every day -- and we make sure we do that every time we get on the field."

McIver-Brown, 6 feet and 278 pounds, leads the Patriots with 76 tackles, including 22 for loss. He also has forced three fumbles and blocked two kicks. McIver-Brown has attracted attention from college recruiters, and has a scholarship offer from UTEP.

McIver-Brown and his defensive teammates will be busy Friday night.

The Wagner offense has been dominant in district play after starting the season slowly, outscoring seven district opponents 398-6. While not as explosive as they were with Tobias Weaver at quarterback, the Thunderbirds have had no problem piling up points.

Weaver signed with Navy in February and is enrolled at the Naval Academy's prep school in Rhode Island.

Sophomore Isaiah Williams has settled in as the Thunderbirds' starting quarterback, completing 18 of 34 passes for 488 yards and 12 touchdowns. He has been intercepted once.

Playing against an option offense presents a variety of mental and physical challenges for a defense, McIver-Brown said.

"It's a lot of making sure that we understand we have that certain responsibility and that the person next to us gets their responsibility also. They're a good offense and once they see a mess-up, they go attack it."

McIver-Brown had plenty of praise for Butler, who averages 11.8 yards per carry.

"He's just a hard-nose runner," McIver-Brown said. "He'll just get the ball and run it down your throat, just keep going. That's somebody we know we've got to stop."