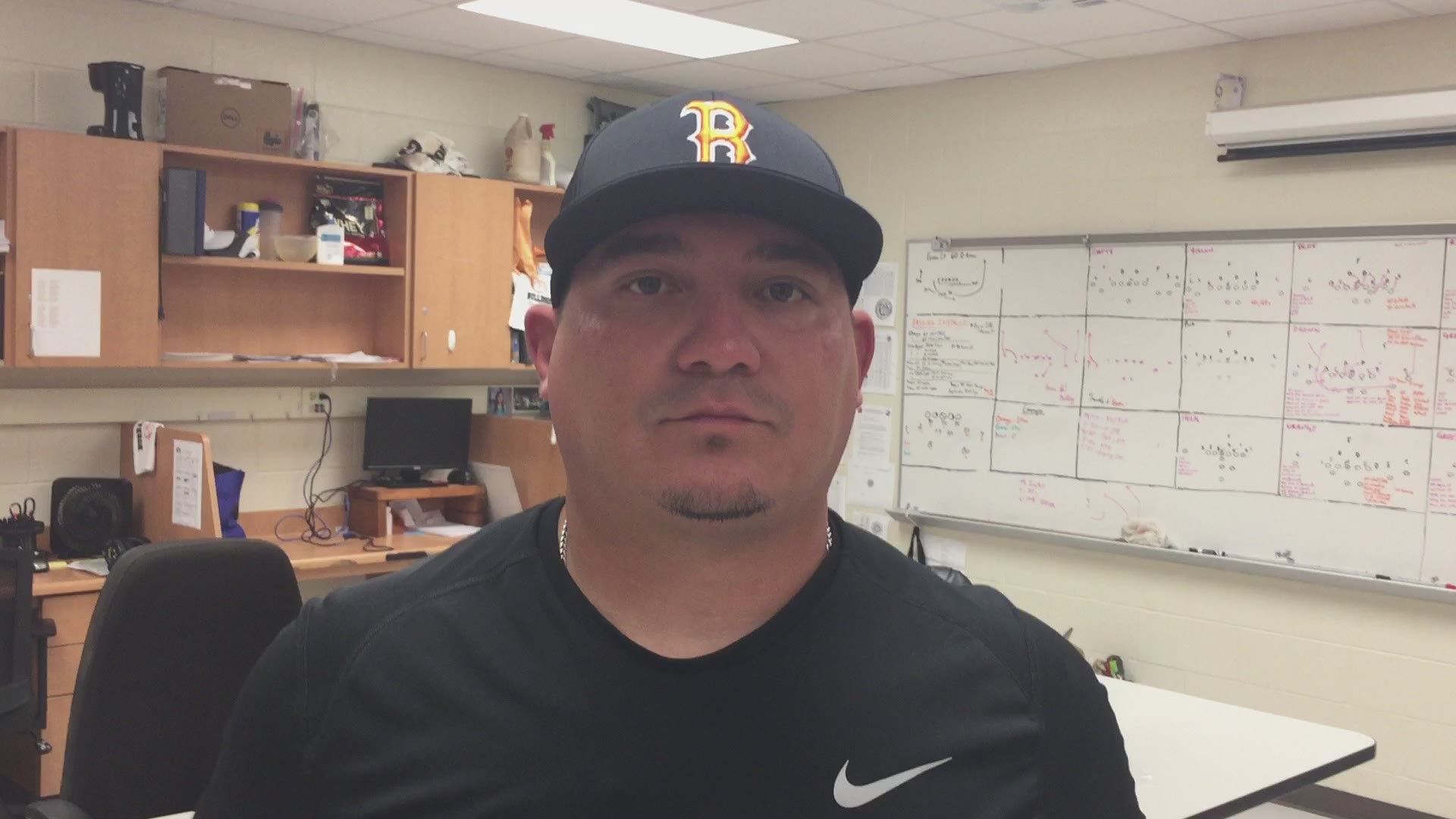 SAN ANTONIO — Off to their best start in 41 years, the Burbank Bulldogs already have won half as many games in the first month of the high school football season as they did during their entire campaign last year.

Burbank improved to 3-0 with a 27-24 victory against Edison in their District 13-5A Division I opener last week and plays Brackenridge (2-1, 1-0) on Friday night at the SAISD Sports Complex.

Burbank and Brack are No. 9 and No. 10, respectively, in the KENS5.com Sub-6A area rankings.

"This week has been crazy because of the 3-and-0 start," Burbank coach Phil Barron said. "Media's been crazy, the social media has been crazy. It's been nonstop in the community.

"When I go off-campus and see somebody from our area, they make it a point to come congratulate me. It's been a surreal feeling around here, especially in the community."

The Bulldogs haven't begun a season 3-0 since 1978, when they finished 10-1 after losing to eventual state-semifinalist Churchill in the first round of the playoffs. That's the only time in school history the Bulldogs, who were coached by Jerry Janert that year, have finished a regular season 10-0.

Burbank's fast start has sparked a buzz in the school's community and evoked memories of the last time the Bulldogs won a district championship. To appreciate how long ago that was, ponder this: Jimmy Carter was in the second year of his presidency in 1978, and six other men have occupied the Oval Office in the ensuing 41 years.

Credit: David Flores / Kens5.com
Phil Barron went 12-9 in two years at Burbank and led the Bulldogs to back-to-back winning seasons for the first time since the mid-1960s

While Burbank is brimming with confidence, Barron has exhorted his players to stay hungry and humble.

"Like I've told everybody who's approached me, we're not done," Barron said. "We're not OK with 3-and-0. We want to keep rolling. That's kind of the focus right now, not being content and seeing how far this season can go and how well we can wind up doing. It's not only about how you start, but how you finish."

Driven by the disappointment of missing the playoffs on tiebreakers last year, the Bulldogs are determined to earn a postseason berth this season.

"The mindset of this team is to not get complacent," junior standout running back Matthew Salazar said. "We're not satisfied with a 3-and-0 record. We just want to prove everybody wrong by making the playoffs. That's pretty much been our goal since the summer, and that's why we work so hard."

Averaging 9.2 yards per carry, Salazar already has rushed for 526 yards and seven touchdowns despite missing all but one play of last week's game against Edison with an ankle injury. Salazar practiced this week and is good to go for Friday night's game, Barron said.

"I'm ready to play," Salazar said. "My ankle is 100 percent. It was a little frustrating not being able to play last week, but just the fact that my team pulled off the win without me was great."

Senior Jose Flores was outstanding subbing for Salazar, rushing for 115 yards on 21 carries for a 5.5 average.

"He did an amazing job," Salazar said of Flores.

Credit: David Flores / KENS5.com
Burbank junior running back Matthew Salazar already has rushed for 526 yards and seven touchdowns despite missing all but one play of last week's 27-24 victory against Edison.

Burbank went 6-4 overall and 5-3 in district last year, missing the postseason after finishing in a three-way tie for third. Brack beat the Bulldogs 41-34 last year and made the playoffs.

Defending champion Wagner and Veterans Memorial are expected to finish 1-2 in the district race, with Brack, Burbank and Sam Houston fighting for the two other postseason slots.

"It's been a long time since this happened," junior defensive tackle Xavier Morris said, referring to Burbank's 3-0 start. "Coach (Barron) has told us to stay humble and keep doing what we're doing and get better at it. We're not satisfied. We're taking every game as though we were still 0-0."

Barron, 35, was the offensive coordinator at Burbank for one season before he was promoted to head coach after Mark Perez resigned in 2018.

Barron took over a program that has struggled mightily since the Bulldogs' memorable 1978 season. Burbank's 6-4 finish last year was only its third winning season in the past 40 years (1979-2018).

Burbank has made the playoffs three times since 1979, including the 2017 season, but has lost in the first round each time.

A South San graduate, Barron has worked to cultivate a winning culture since he landed his first head-coaching job at Burbank. It hasn't been easy, of course, but he's made some headway.

"We don't have big numbers here at Burbank," Barron said. "We never have. Although our program has grown at the sub-varsity levels, at the varsity it's kind of stayed the same. But I've told the kids we're all we have. Everybody in this locker room, this is all we have. But this is all we need.

"They've kind of bought into that, holding each other accountable and being responsible for things has kind of taken off because I've let them know that this is all we have, but this is all we need."

Although Burbank has been one of the San Antonio area's biggest losers on the football field for most of the past 40 years, the players on this season's team have been associated with only a small part of that history.

"Losing is not acceptable," Barron said. "It's not OK anymore, just to lose, or be average, or be content. I think that's the attitude of the kids now."

The Bulldogs' 3-0 start has reflected that attitude, but as Barron said, "There's a bunch of football still to be played."