The Jarrell Cougars and Smithville Tigers matchup is KVUE's fourth Game of the Week of the 2020 season! 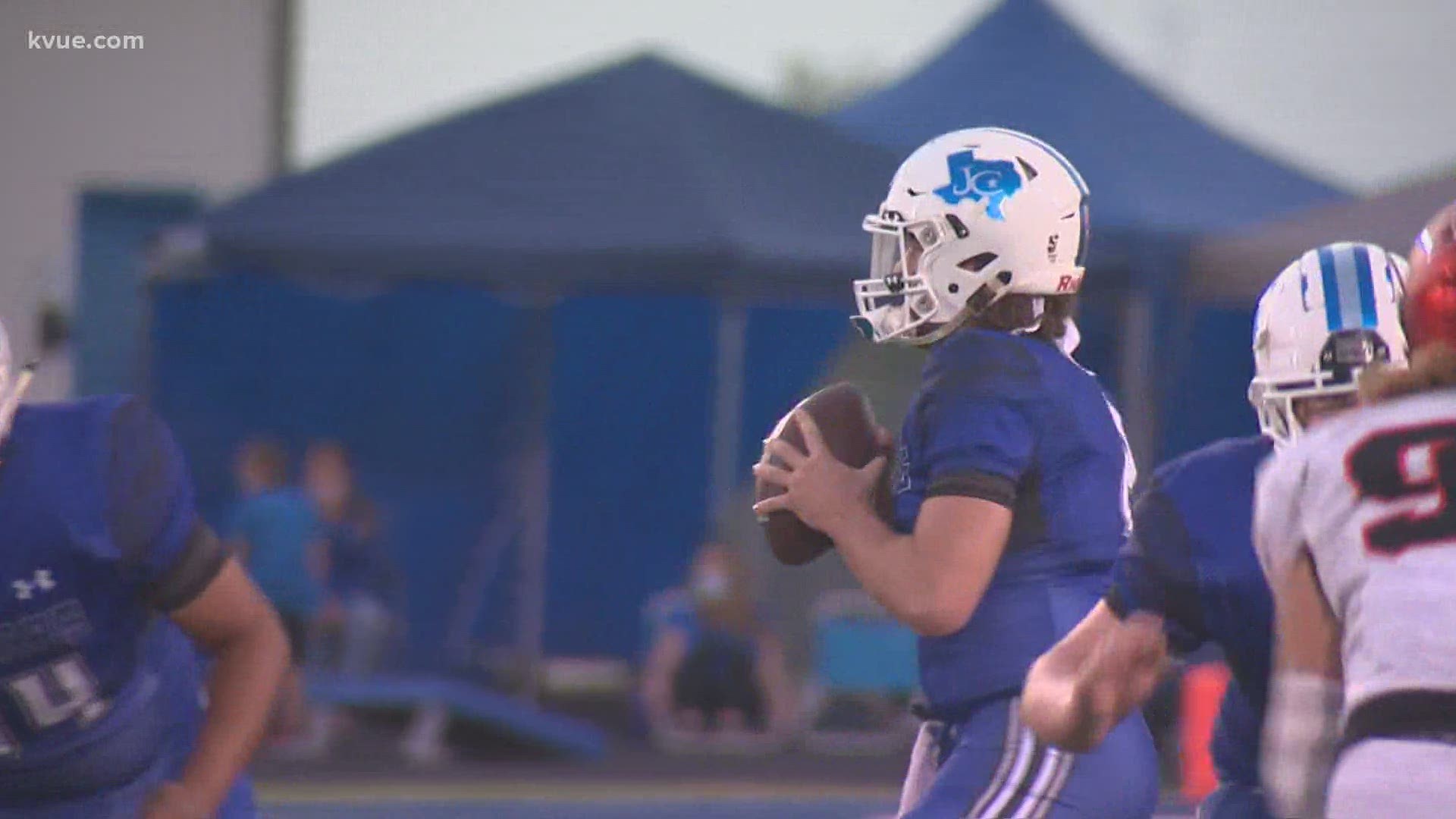 JARRELL, Texas — It's week four of the Texas high school football season and that means the KVUE Sports team is back to giving you the latest scores and highlights in the Austin area!

It also means we'll showcase one game as our Game of the Week, and the Jarrell Cougars and Smithville Tigers take the honor in week four.

For a look at the latest district standings in Central Texas, click here for that story.

In KVUE's fourth Game of the Week, we head out to Jarrell, where the Cougars will host the Smithville Tigers. Smithville has dropped back-to-back games after starting its 2020 season with a win against Columbia.

Meanwhile, Jarrell has started 0-3 and is looking for its first win in 2020 after moving up from 3A to 4A.

On paper, Smithville has the edge. The Tigers are more experienced at the 4A level and won a playoff game last season. However, Smithville coach Cyril Adkins knows from experience that all Jarrell needs is one chance to turn the tide.

"I see a good team that's just waiting to beat someone that they don't think they're supposed to beat, it's kind of where we were some years back and once they get that win they're going to figure out that they're a good ball club, so we're not going to take anything for granted," Adkins told KVUE Sports.

While Jarrell has lost its first three games to start the 2020 season, the Cougars' head coach told KVUE there are lessons to learn when you're on the way to something special, and he's turned to a book to help his players buy into the theory.

"We started reading a book called Chop Wood, Carry Water," Amos Davidson said. "It's about the process of becoming great and that's just what we're stressing to them each week – stay down the path, stay in the process, one step at a time and the games are going to come. These first five games are to get us ready for the last five games."

Kickoff for this game is scheduled for 7:30 p.m. KVUE will update this story with score updates, and don't miss the highlights from this game in the 10 p.m. newscast! KVUE's Friday Football Fever show begins on Sept. 25, so until then, catch the latest scores and highlights in KVUE's 10 p.m. newscast at the start of the show! You can also get the latest scores and highlights directly to your phone by downloading the KVUE app at kvue.com/app.

The KVUE team will be live from Jarrell for all the action.

It’s about time for kickoff here in Jarrell. The Cougars take-on Smithville in our @KVUE Game of the Week! pic.twitter.com/orFy2x5eQ8

Smithville's first score was Chris Sanders with a defensive scoop-and-score, then the second touchdown came from a six-yard Ian Flowers run and Christian Adkins capped off the quarter with a 15-yard touchdown run.

Smithville leads 21-0 after one. First score was Chris Sanders with a scoop-and-score, then Ian Flowers with a 6 yard run, and Christian Adkins with a 15-ish yard run.

The Tigers are on the 1—going in—to open the second quarter.

Jarrell trails Smithville 43-0 at the half.

Baylor game against Houston postponed due to COVID-19 concerns

Texas bars must remain closed as most restaurants reopen to 75%, Gov. Abbott says