DiDomenico, who became the Buffaloes' starting quarterback four games into his sophomore season, was the District 26-6A Offensive MVP last year. 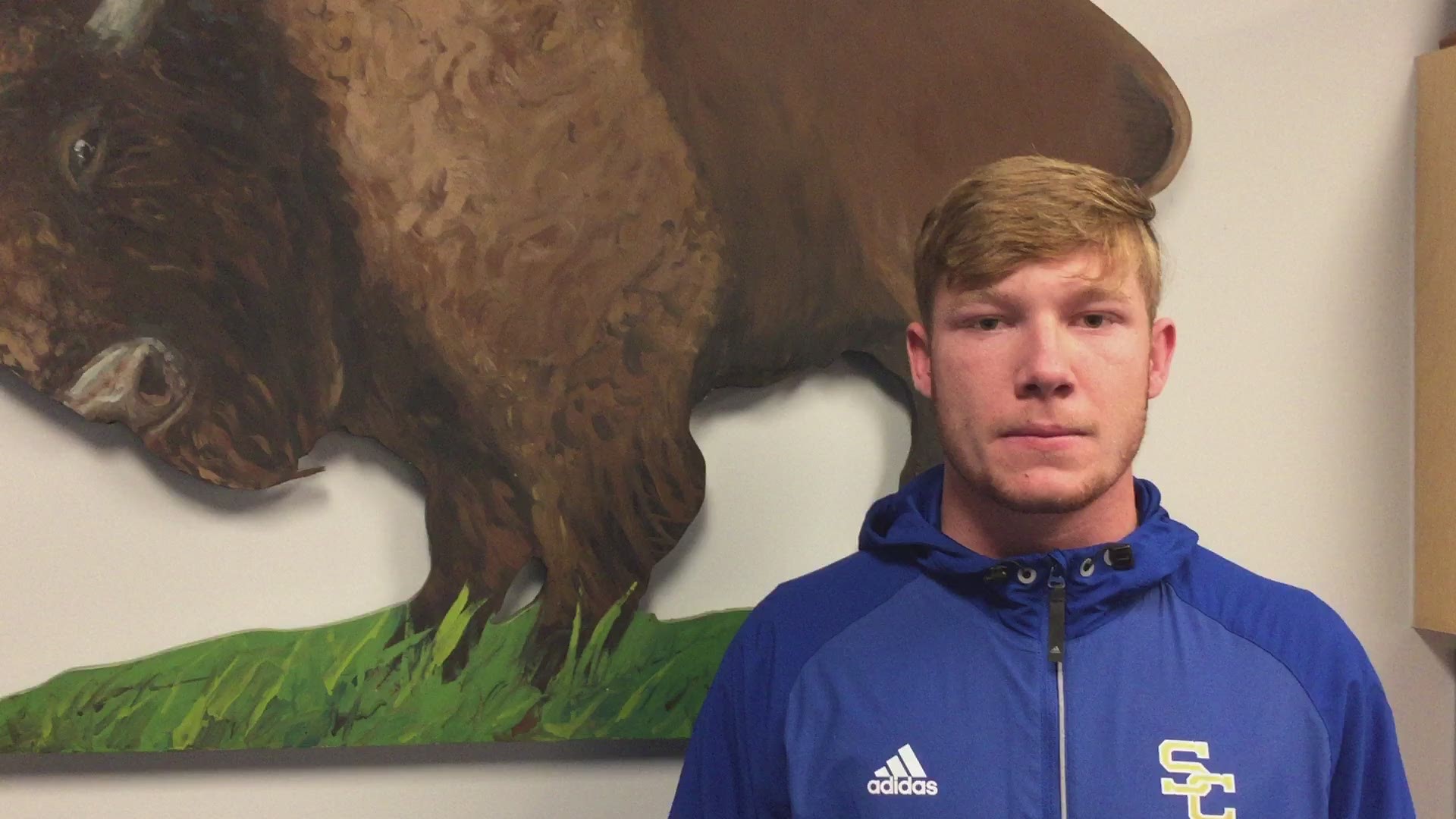 Editor's note: The above video was originally published on Nov. 15. 2019

SAN ANTONIO – Whether it’s in the classroom or on the football field, Clemens quarterback Max DiDomenico relishes the challenge of pushing himself and putting in the work to perform at a high level consistently.

“Guys like Max, they lead by example,” Clemens coach Jared Johnston says. “He is like having a coach on the field during a game. He’s just as smart on the football field as he is in the classroom.”

Voted District 26-5A Offensive MVP as a junior last year, DiDomenico combined for 2,809 yards of total offense, passed for 14 touchdowns and ran for 19 more while helping the Buffaloes win their first league title since 2006. Clemens (10-2) made the playoffs for the sixth time in eight seasons under Johnston, losing to Brandeis in the second round.

“When you have a guy back who’s going to end up being a three-starter for us and has been in the heat of the battles, that’s always a plus,” Johnston said. “You can’t beat that.”

DiDomenico, 5-foot-10 and 190 pounds, has been Clemens’ starting quarterback since the fourth game of his sophomore season. He was a starting strong safety on defense before Johnston and offensive coordinator Brad Molder agreed to give him a shot at quarterback.

Starting his first game at quarterback since he played on the freshman team, DiDomenico was outstanding in the Buffs' 19-13 victory over Smithson Valley in their 26-6A opener. While he passed for only 61 yards, DiDomenico rushed for 243 yards and two touchdowns on 25 carries.

With the country still in the grip of the coronavirus, it’s been a surreal spring for DiDomenico and high school athletes throughout the country. While Clemens has been closed since mid-March, DiDomenico has stayed in touch with his coaches and teammates through Zoom conferences, email, phone calls and text messages.

“Taking everything day by day, just doing what I can,” DiDomenico said. “At the start of it (pandemic) I thought we were only going to be out of school for about a week or two, at the most, and then it just kept going on.

“About a month in I was, like, I need to start doing something. Go work out, do anything I can to stay in shape and stay ready for whatever happens. Everybody’s in the same boat, so whatever I can do to outwork everyone.”

DiDomenico has worked out regularly with wide receiver Andrew Edwards and running back A’Mari Williams, two other returning starters who will be seniors when the new school year starts.

“We’ve been best friends since the seventh grade,” DiDomenico said. “We toss the ball around and do anything to stay active. It’s a little bit different not having everyone there.”

DiDomenico also lifts weights four days a week with his brother, Zach, a former Clemens linebacker who graduated in 2017, at their uncle’s office.

Williams has played football with DiDomenico since they were fifth-graders.

“He’s been my quarterback for a long time, so we have a connection,” Williams said. “He’s always been like a leader type. He’s always taken charge, made sure everybody’s doing what they’re supposed to be doing. He’s been like that since the fifth grade when I met him.

“He’s never changed. He’s been the same person since I met him. Sometimes we’ll let him call up plays. He comes up with all this other stuff. We run it in the games and it ends up working, so they basically go to him if we ever need anything else. He’s just a smart football player.”

Edwards lauded DiDomenico for his work ethic and leadership.

“He’s always looking at any opportunity that he can get to get better,” Edwards said. “He makes sure that people around him are getting better, too, always inviting us to go to the field (at Clemens) to get any type of work in. We always push each other when we work out.

“He jumps into all the different (Zoom) meetings to make sure his team is doing what it needs to be doing to learn about the game. That’s why it’s so easy for him on Fridays during the season. He sees it all. He has that high IQ.”

An honor student, DiDomenico has a 4.0 grade-point average. Ivy League school Cornell is one of three universities that have offered DiDomenico a scholarship. The other two are Incarnate Word and Bryant University, a Rhode Island school that competes in the NCAA’s Football Championship Subdivision.

The Clemens quarterbacks have a Zoom conference with quarterbacks coach Brian Owens every Thursday to stay up with the offense and take notes on any tweaks to the system. DiDomenico also does film study with Owens and on his own.

“We’ve been trying to implement some new things in the offense, so Coach (Owens) will set up a power point for me once in a while,” DiDomenico said. “We go over all our formations we had last year and what we’re changing, all the new signals. It’s about learning all the new things. Everything that’s old, I already know pretty well.

“The technology definitely helps a lot. The coaches will send it through Google Classroom or email it to me, text it to me. It’s not the same as being with the whole team and the coaches, but it’s still nice to keep up with everybody. It’s a good feeling. Whenever I’m not in the quarterback Zoom, I’ll go join the safeties Zoom, or the D-line, O-line, just to see how everybody’s doing.”

Credit: Photo by Antonio Morano bit.ly/XR79FT / Special to KENS5.com
Max Didomenico, who will be a senior this season, has been Clemens' starting quarterback since the fourth game of his sophomore year.

Johnston praised DiDomenico for the way he has remained engaged with his teammates.

“Him wanting to be in the O-line Zoom to see his boys tells you a lot about him,” Johnston said. “He understands that those guys on the offensive line play a big part in the success that he has as an individual and the success that we have as a team. He gets that.”

No one knows when Texas high school athletes will be allowed to work out at school again, but that day can’t come soon enough for DiDomenico.

“I think it’s going to be special when we go back, especially for the seniors, because we know this is our last season,” DiDomenico said. “Going through the pandemic is just going to make it more special.”

DiDomenico said it would be “heartbreaking” if the football season were canceled because of the pandemic, but he isn't taking the public health threat lightly.

Coronavirus got DiDomenico’s full attention when a cousin of his father who lives in Connecticut contracted the illness not long after it hit the country.

“That kind of hit home,” he said. “She was on a ventilator within two days of getting the virus, and she was on the ventilator for 11 days. She was very fortunate that she came out of it. She’s getting better. She’s getting healthy.

“My mom has an autoimmune disorder, so she’s very susceptible to it, too. I’ve been taking it very seriously. My mom locked me down for a few weeks. I couldn’t leave the house. I understand it fully, for sure.”

DiDomenico, Edwards and Williams make sure to take precautions when they work out together.

“I don’t usually wear a mask when I work out, but definitely no handshakes or getting close to each other,” DiDomenico said. “Right when I get home, my mom makes me wash my hands, go take a shower, just staying as safe as I can.”

RELATED: HS coaches welcome UIL move to give them more time to work with athletes this summer