Wagner, No. 1 in the KENS5.com Sub-6A area rankings, and No. 5 Vets Memorial meet for District 13-5A Division I title Friday night. 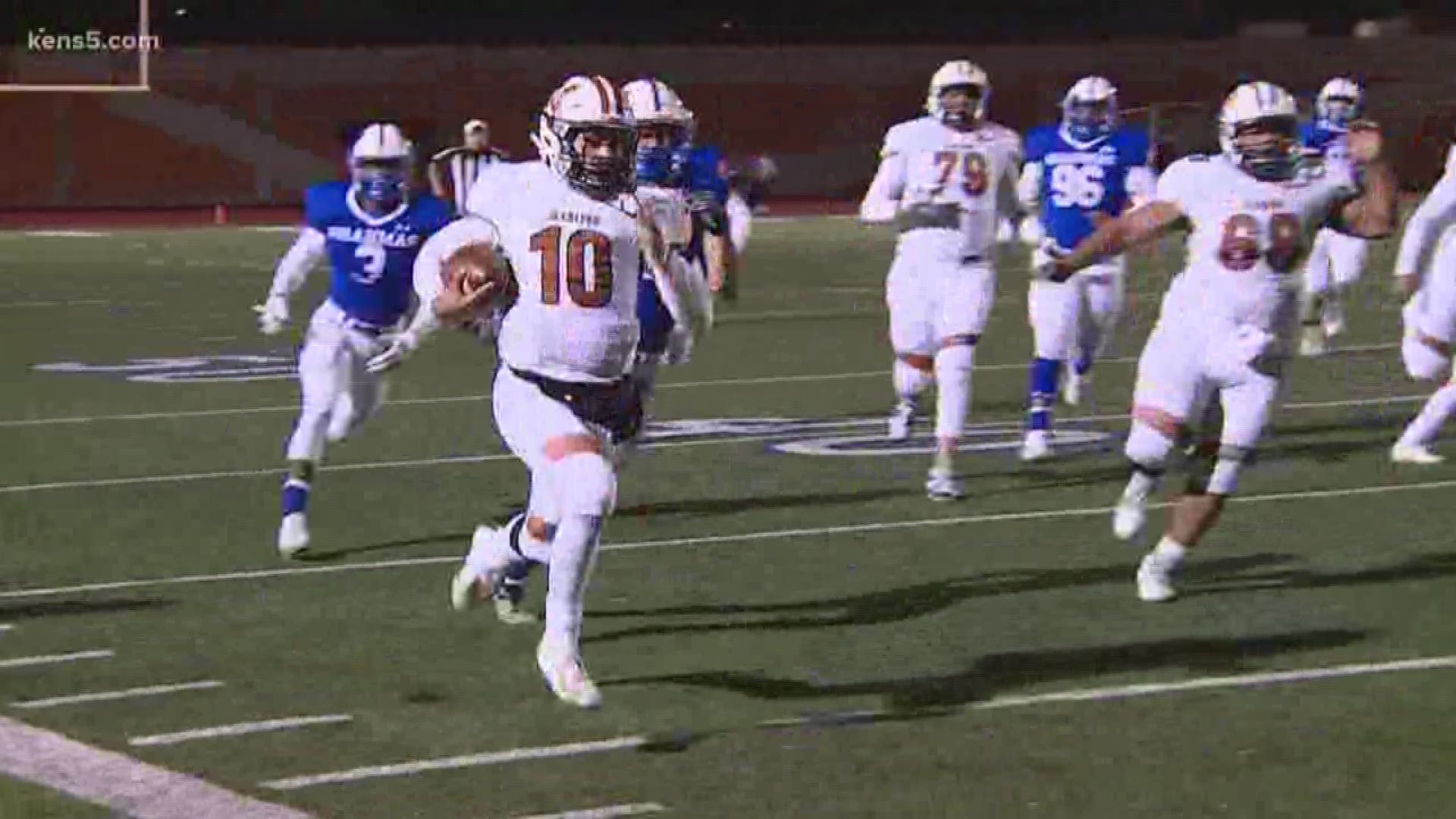 SAN ANTONIO — On a collision course since the start of the season, Judson ISD rivals Veterans Memorial and Wagner finally square off for the District 13-5A Division I title Friday night.

A large crowd is expected to jam into Rutledge Stadium to watch defending district champ Wagner, No. 1 in the KENS5.com Sub-6A area rankings, play No. 5 Veterans Memorial for only the second time.

The game has been one of the most highly anticipated matchups of the high school football season in the San Antonio area this year.

Wagner is 8-1 overall and 7-0 in district and Vets Memorial is 7-1 and 6-0. Friday's game will be the last of the regular season for the Thunderbirds, who have an open date next week.

Wagner routed the Patriots 56-7 last year, Veterans Memorial's first varsity season, and went on to finish 13-2 after falling in the state semifinals.

Vets Memorial, runner-up to Wagner in last year's district race, reached the second round of the playoffs and went 8-4.

Wagner has shut out six of its seven league opponents since losing to 6A power Judson 52-14 in their annual Hammer Bowl on Sept. 6. The Thunderbirds have scored 391 points in district play and allowed only six.

Vets Memorial also has won seven straight since falling to Boerne Champion 54-41 on the same night Wagner lost to Judson. The Patriots have outscored their six district opponents 340-48 and pitched two shutouts.

Credit: Photo by Antonio Morano bit.ly/XR79FT / Special to KENS5.com
Judson junior running back DeAnthony Lewis has rushed for 994 yards and 16 touchdowns on 88 carries, an average of 11.3 yards per tote, this season.

The skinny: Rockets QB Mike Chandler had 374 yards of total offense, rushing for 214 yards and four touchdowns and passing for 160 yards and another score.

The skinny: Clemens remains tied with Judson atop District 26-6A standings.

The skinny: Knights senior running back De'Quavion Thomas rushed for 172 yards and one TD on 21 carries and had a 17-yard TD reception.

The skinny: Rough Riders sealed the victory by stopping the Jaguars' run on the two-point conversion attempt after scoring first in OT.

The skinny: Panthers outgained the Cougars 459-50 in total offensive yardage.

The skinny: Madison QB Michael Garza completed 9 of 14 passes for 140 yards and one TD, and rushed for 81 yards and two TDs.

The skinny: The Jaguars went for the win after the Rough Riders went up by seven in OT, but were stopped on two-point conversion attempt.

The skinny: Smithson Valley running back Greg Eggleston rushed for 152 yards and one TD on 19 carries.

The skinny: Thunderbirds outgained the Bulldogs 402-92 in total offensive yardage.

The skinny: Tivy QB Trapper Pannell racked up 430 yards of total offense, threw for five TDs and ran for another score.

The skinny: Chargers QB Luke Boyers passed for two TDs and ran for a third.

The skinny: Hawks running back Aubrey McDade rushed for 225 yards and one TD on 22 carries.

The skinny: Patriots have had an extra seek to prepare for the showdown with Wagner.

The skinny: Panthers running back Moise Sims rushed for 141 yards and two TDs on only nine carries.

The skinny: Cardinals have won two in a row, improving to 3-2 in district.

The skinny: Bulldogs bounced back after 56-28 loss to Wimberley the previous week.

The skinny: Apaches QB Khalil Warfield rushed for 188 yards and two TDs on 19 carries and passed for 34 yards and another score.

The skinny: The Trojans outgained the Greyhounds 429-236 in total offensive yardage.