The word is out: Southside QB Richard Torres is a bona fide FBS prospect

At 6-foot-6 and 210 pounds, Torres checks all the boxes as a prototypical quarterback, according to one local recruiting analyst. 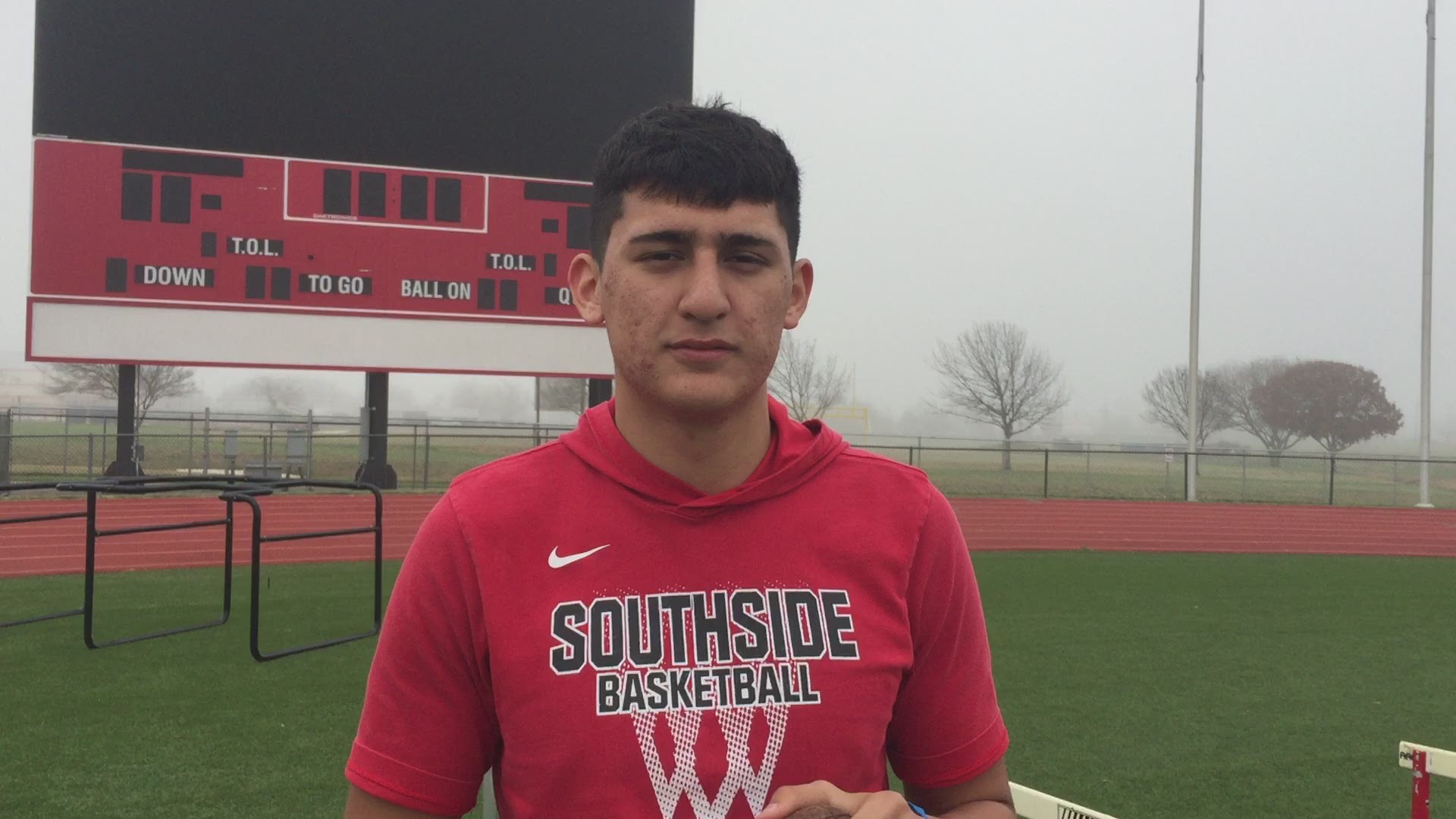 SAN ANTONIO — Southside High School junior Richard Torres is having quite a month.

On track to become the most highly-recruited greater San Antonio quarterback since Steele’s Tommy Armstrong a decade ago, Torres has received scholarship offers from five FBS schools in March.

Based on the attention he’s drawing and his impressive upside, more are sure to come. At 6-foot-6 and 210 pounds, Torres checks all the boxes as a prototypical quarterback, according to local recruiting analyst Chris Enrico.

“He’s on quite a trajectory,” Enrico, director of Texas recruiting for TXFL Preps/210 Preps, said this week. “I’ve been doing this for 15 years and I’ve never seen anything like it. It’s been crazy.”

Since receiving his first scholarship offer from UTSA on March 1, Torres was offered by Nebraska, UNLV, Washington State, and San Diego State, in that order, during a seven-day span.

“It’s been interesting,” Torres said this week at Southside Stadium. “It’s just been a blast. My family, my mom, my dad, really love it. I’m making them really proud. My brother and my sister are so interested in it, too. They really can’t wait to see me playing on the next level on national TV, on a national stage.

“It’s really cool. A lot of players around here (Southside), too, they’re really starting to follow me, trying to follow the leadership I’m trying to bring back around. We’re hitting the weight room every morning and I come out and throw after that.”

Other schools that have expressed interest in Torres include Baylor, Florida, Iowa State, South Carolina, UCLA, and Utah.

Torres became Southside’s starting quarterback last year after playing behind senior Alejandro Escamilla as a sophomore. He was voted District 14-5A Offensive MVP after passing for 1,149 yards and 18 TDs in only seven games. The Cardinals had four games canceled by COVID-19, losing one by forfeit and winning three by forfeit.

Torres, who also rushed for 276 yards and five TDs, helped lead Southside to the district title. The Cardinals lost to Corpus Christi Flour Bluff 31-21 in the second round of the playoffs, finishing 9-2.

“Richard has a lot of athletic ability and a very unique skill set,” said Ricky Lock, who has been Southside’s head coach for seven seasons. “He’s 6-foot-6 and has tremendous mobility that goes along with having a cannon for an arm. He can make every throw under the sun.

“He’s intelligent. He’s got a lot of football savvy. He understands situations and he makes plays. It’s a great combination for him. I’ve never had a guy with this unique skill set in all the years that I’ve coached. He’s a special kid.”

Southside doesn’t ordinarily attract attention from FBS recruiters, but this year has been different.

“Ever since I was little, people have kind of looked down at Southside,” Torres said. “Coming here, I wanted to change that. I feel like I’ve done a pretty good job as of now. I’m just trying to put Southside on the map. I think Coach Lock has done a real good job of doing that, too.”

Torres would be only the fourth Southside player in school history to play at an FBS school. Running back Caleb Camarillo and linebacker Micah Young signed with Air Force and Wyoming, respectively, this year. They were the first Southside players to sign with an FBS school since defensive tackle Clenzie Pierson went to Rice in 1978.

“Caleb and Micah raised the bar at Southside and I’m trying to raise it even higher,” Torres said. “I really appreciate those guys.

Armstrong, who helped lead Steele to the Class 5A Division II state title as a junior in 2010, signed with Nebraska in 2012 and started three seasons for the Cornhuskers. Armstrong was so impressed when he saw Torres’ highlight video on YouTube that he called him to push Nebraska.

“When you hear about Nebraska, you’re not really that familiar with it down here,” Torres said. “What he (Armstrong) kind of did for me was he told me about the city (Lincoln, Neb.), what the fans are like, what game day is like. He also talked to me about stuff after high school. He still lives up there (in Omaha).

“Tommy and the coaching staff at Nebraska are always telling me that you’re going to meet people up there and you’re going to have connections that will help you after football.”

Torres received Nebraska’s scholarship offer from head coach Scott Frost. NCAA regulations prohibit coaches from commenting on a prospect before he signs a letter of intent.

“He was just like ‘We’re really interested in you,’” Torres said. “Stuff like that. He said I’m No. 1 on their board and they really would love to have me there. I’m buying everything they’re telling me right now. I’m kind of just taking it real slow. I don’t want to rush things. It’s a really big decision.”

Enrico has been tracking Torres since his freshman season after hearing about him from Southside assistant coaches Crosby Adams and Dante Montoya. Given the potential Torres showed last year, Enrico said he isn’t surprised that college coaches are going after him.

“I would say that if you would draw a prototypical quarterback, Rich is the prototype of how you would draw it up,” Enrico said. “He would be the standard. He’s tall. He’s got the frame to where he could easily play at 240 (pounds). He’s got a Josh Allen body type.”

Allen is the starting quarterback for the Buffalo Bills.

“When Dante and Crosby told me about Rich as a freshman, the big question was whether he thought he was a basketball player,” Enrico said. “That and then whether he was going to be patient enough to wait behind Ale (Alejandro Escamilla), because they weren’t going to play him over Ale. You could tell he was very raw, but even then he had the quickest release I’ve seen in 15 years.”

RELATED: What is the next NFL quarterback domino to fall this offseason?

RELATED: Trio of Black NCAA coaches discuss their goals and motivations on the field | Together We Rise

Enrico said the only other San Antonio-area quarterback he’s seen with a stronger arm is Armstrong. He even compared him favorably to Kerrville Tivy graduate Johnny Manziel, who won the Heisman Trophy as a redshirt freshman at Texas A&M in 2012.

“Rich can release the ball at angles,” Enrico said. “He does not have to step up into a throw. You see these quarterbacks who are elite when they have a nice, clean pocket and they’re able to take their drop. When Rich is under duress, he makes it look routine.”

Enrico is the son of former Central Catholic head football coach Carlos Enrico, who was also the school’s athletic director.

Torres has been a starter on the Southside varsity basketball team since his freshman season, and led the Cardinals in scoring as a junior.

“Coming into high school, I wanted to play basketball,” Torres said. “I always played football just for the fun of it. I’ve always loved football since I was little, but basketball was my main interest. But it got to the point where I had to make a decision about my future. I think football is the right go for me.”

With the basketball season behind him, Torres has turned his focus to football again. He is playing in a 7-on-7 tournament Saturday in Houston will compete in others this spring and summer. Torres also will participate in college football camps and making official recruiting visits.

March has been a blur for Torres, but he’s adapting to the attention he’s receiving from recruiters.

“I wanted to play college basketball,” Torres said. “That was a big dream of mine. I brought my talents to the football field, and it really went off from there. When I was getting the offers, I was like, ‘Wow, these are big. But I know all this is just conversation on my phone.

“When I actually get to college, it will be so different. Right now I’m trying to stick with the team here at Southside, and not get big-headed. I’m not going to let it get to me at all.”

Torres is keeping his options open regarding his college preference. For now, some think Nebraska has the inside track.

“To me, it’s wherever I feel at home,” Torres said. “Obviously, wherever it’s going to make my family happy, make me happy, and then whatever coaching staff is going to develop me as a player and help me reach my full potential. That’s all I’m looking for.”