The Golden Eagles will play Duncanville for the state title at 8:30 p.m. Saturday in the Alamodome. 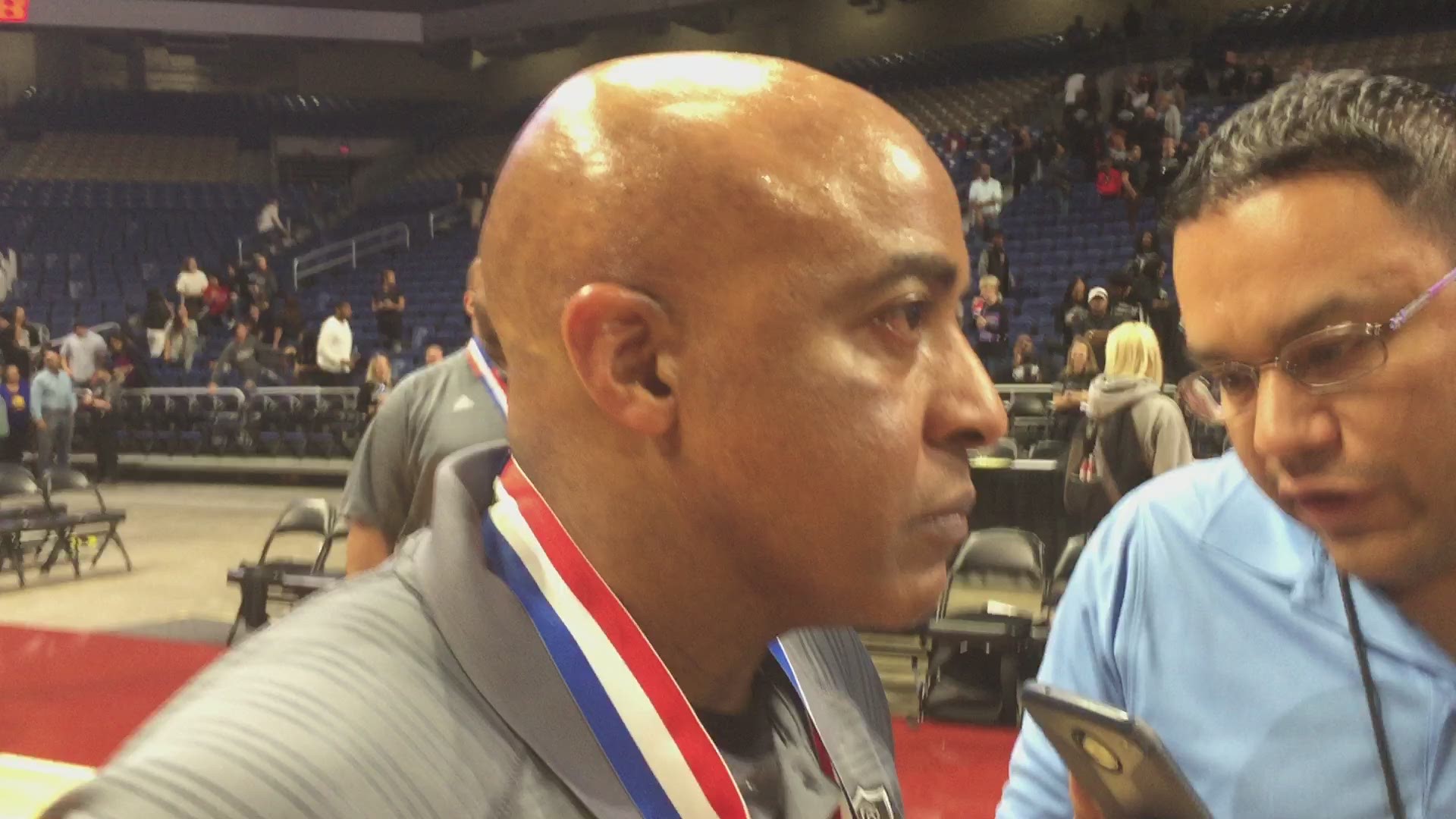 SAN ANTONIO — For a half, it appeared as though Steele would get over the hump and win its first game in three appearances at the UIL boys basketball state tournament.

Unfortunately for the Knights, Klein Forest had other ideas.

Down by 10 at the half, the Golden Eagles stormed back in the third quarter and raced to a 69-60 victory in the Class 6A state semifinal before a crowd of 12,625 at the Alamodome.

"It's extremely disappointing right now, but we couldn't be more proud of the things they did," Steele coach Lonny Hubbard said of his players.. "Started out 0-4. Everybody counting us out.

"For those guys to have the intestinal fortitude to fight their way through and win 15 games in a row, go through a tough district schedule and then pull off a bunch of playoff wins to get to this point, I couldn't be prouder. Yes, we're upset because we thought we had a chance."

The 6A final will be the last game of the three-day University Interscholastic League state tournament at the Alamodome.

Credit: Photo by David Olmos / Special to KENS5.com
Steele coach Lonny Hubbard's glum face reflects his team's plight in the second half of the Knights' 69-60 loss to Klein Forest in the Class 6A state semifinals.

Steele (30-9) has advanced to the state semifinals three times, all under Hubbard, but have yet to reach the title game. The Knights lost to South Grand Prairie in 2013 and to DeSoto in 2016.

Friday's loss ended an improbable run to the state tournament for Steele, which was expected to have a drop-off after losing college signees Gerald Liddell (Texas) and Jayden Martinez (New Hampshire) to graduation.

The doubts persisted after an 0-4 start, but the Knights found their footing and reeled off 15 consecutive victories before losing back-to-back games against Allen (93-91, in double overtime) and Killeen Shoemaker (57-40) in the Allen tournament Dec. 29.

Steele went gone 15-3 the rest of the way, winning a second straight district title and continuing its trend of reaching the state tournament every three years.

The Knights were up by 12 early in the third quarter before Klein Forest went on a 19-5 run to take a 49-47 lead heading into the fourth period. Knights sophomore guard Langston Love hit a jumper 13 seconds into the last quarter to tie the game at 49.

But Klein Forest junior guard Dylan Hamilton made a free throw 39 seconds later, putting the Golden Eagles ahead for good.

Credit: Photo by David Olmos / Special to KENS5.com
Steele senior guard DeVaughn Rider dunks after making a steal in the first half of the Knights' 69-60 loss to Klein Forest in the Class 6A state semifinals.

"It's always been (about) our energy level – defensively, rebounding and challenging shots," Hubbard said. "They started hitting shots. They're a good team. We knew they were going to make a couple of runs back at us. We started missing a lot of shots.

"They made a quick run on us in the second half. We always talk about the first three minutes of the second half. They won that battle. We fought them off a little bit, but then they took the lead. We just didn't really respond as well as we normally have. A lot of shots we usually make didn't quite go in."

Love led the Knights with 23 points, 11 rebounds, and four assists. Senior guard Kwabena Davis had 13 points and was the only other Steele player scoring in double figures.

"We were doubted a lot," senior forward Alijah Comithier said, reflecting on the Knights' season. "During the season, we weren't even projected to win district. We weren't projected even to make it to state, so just the way we pushed through this whole season and making it to state, even though we came up short, it's just phenomenal.

"I'm just proud of my guys. There's just nothing else I can say."

Calvin Solomon and Kharee McDaniel led the Golden Eagles with 24 and 21 points, respectively. Solomon, who hit 7 of 8 shots, also had seven rebounds and four assists.

The Knights finished with 19 turnovers, one more than Klein Forest.

Steele was up 14-13 after one quarter before outscoring Klein Forest 26-17 in the second period.

Solomon led the Golden Eagles' first-half scoring with 12 points. Klein Forest shot 39.1 percent (9-23) and hit 2 of 11 attempts from beyond the arc.

The Golden Eagles had 12 turnovers and Steele had eight in the first half.