Cole also won state, rolling to a 77-60 victory against Tatum in the UIL Class 3A title game Friday at the Alamodome. 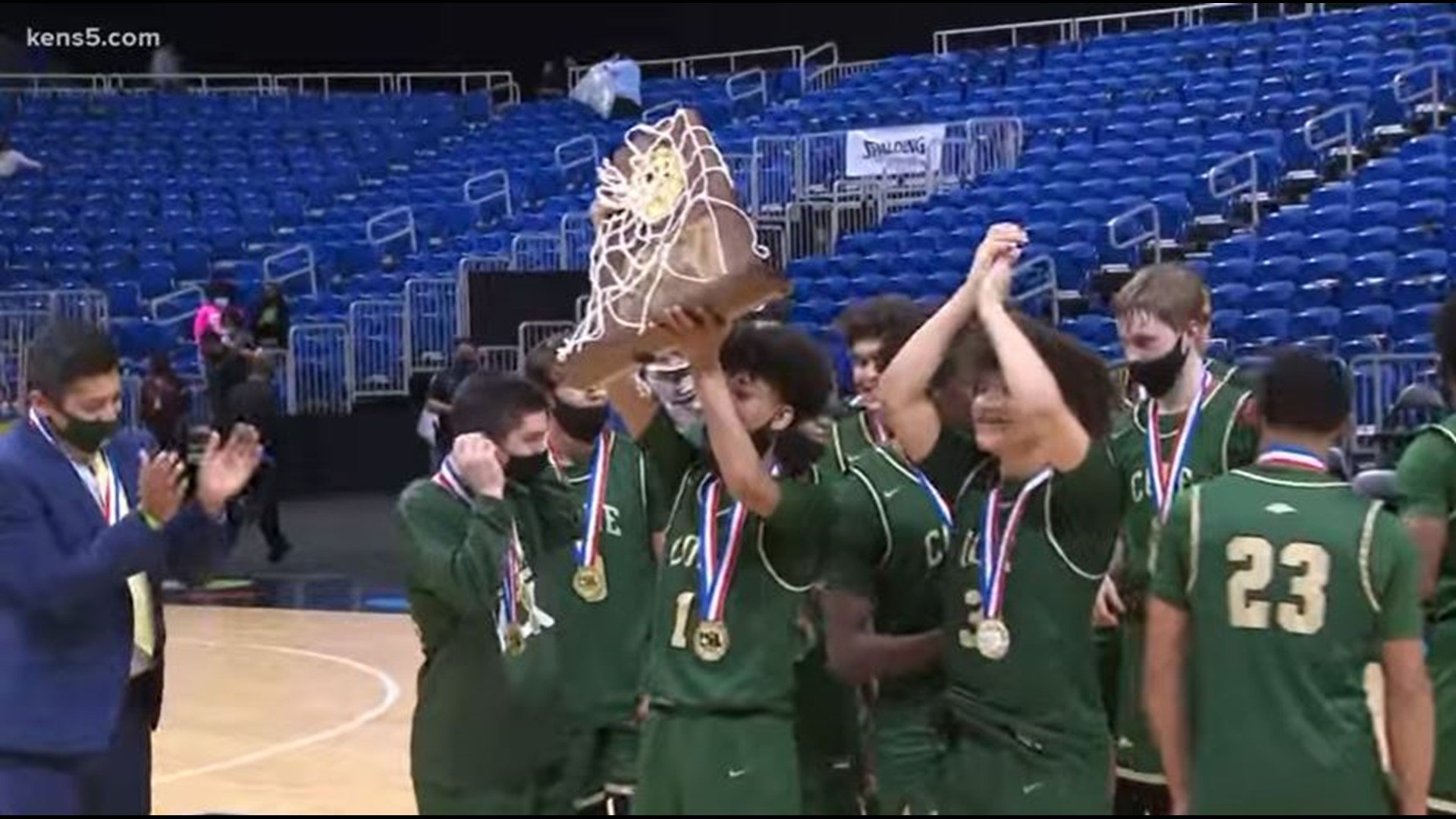 SAN ANTONIO — There’s nothing as exhilarating in sports as winning a championship for the first time. But then again, winning a second one feels pretty good, too.

The Antonian boys basketball team would attest to that after beating Dallas Bishop Lynch 73-57 Friday night in College Station for its second TAPPS Class 6A state title in three seasons.

“This one actually feels better than the first, especially going out my senior year with a state championship and getting to play even with COVID out there,” swingman Bryon Armstrong said Monday.

Denied a second straight championship after losing in the finals last year, the Apaches left no doubt this time. Antonian finished 31-1 and ended the season with a 21-game winning streak that started after a 59-55 road loss to UIL 6A state finalist Austin Westlake.

“After getting so close last year, after winning it and getting in the championship game and coming up a little short, it makes this one a lot sweeter,” Apaches coach Rudy Bernal said. “After we got back from the state tournament last year, I think it ate at these guys a lot that they lost in the final.

“They were determined to get back and win it all again. We had four guys coming back and I think they took it upon themselves that we were going to get back there.”

San Antonio had another boys basketball team win state earlier Friday. One year to the day after the COVID-19 outbreak canceled their final in last year’s state tournament, the Cole Cougars rolled to a 77-60 victory against Tatum for the 3A title at the Alamodome.

It was the Cougars’ first championship since 1989, when Shaquille O’Neal led them to the 3A crown. Coached by Noe Cantu, Cole (27-5) also ended the season with a 21-game winning streak.

Junior guards Trey Blackmore (34) and Silas Livingston (24) paced the Cougars’ scoring. Voted the game’s MVP, Blackmore hit 8 of 13 field-goal attempts and was 15 of 18 from the free-throw line.

Ramos, Armstrong, Ochoa and Freddie Amaro were returning starters from last year’s state finalist, and Martinez transferred to Antonian from Churchill at the start of the 2020-21 school year.

Thomas, a 6-foot-7 transfer from Reagan, moved into the starting lineup after Amaro (6-4) was sidelined with a back injury in January and February. Amaro returned in the first week of March and played in the Apaches’ last three games.

Ramos and Armstrong, who have played together since they were in the second grade, started as a freshman at Antonian and went 136-22 in four seasons as starters.

“I don’t know if there have ever been two players in town who started together for four years and can say that,” Bernal said. “There’s a special bond between those guys.”

Ramos and Armstrong have signed with St. Edward’s and Colorado-Colorado Springs, respectively. Ramos was Antonian’s leading scorer this season, averaging 19.7 points while shooting 57 percent from the field. Ramos also averaged 6.5 rebounds, 5.3 assists, and 3.6 steals. He scored 2,740 points in his four seasons with the Apaches.

“The first championship was definitely very exciting, but the second one felt just as good,” Ramos said. “It never gets old. I could win 10 of them and the feeling would be the same.”

“Bryon brought a lot of toughness to the team,” Bernal said. “He shot the three extremely well (46 percent), too.”

Martinez is the son of former Lanier guard Josh Martinez, who started on Lanier’s state-tournament teams in 2000 and 2001, and was coached by Bernal.

“We took a lot of pride in beating those UIL teams,” Ramos said. “One of the big reasons we schedule those teams is because there’s that debate of public versus private. We kind of wanted to show that as a private school we can compete against anybody in the state, regardless of classification.”

Bernal always figured he would continue his career at a private school after resigning at Lanier at the end of the 2013-14 season, his 31st with the Voks. Bernal became synonymous with Lanier long before he retired from public education.

Bernal said this season’s Antonian team is “very similar” to the Lanier squad that reached the Class 4A (now 5A) state final in 2001. 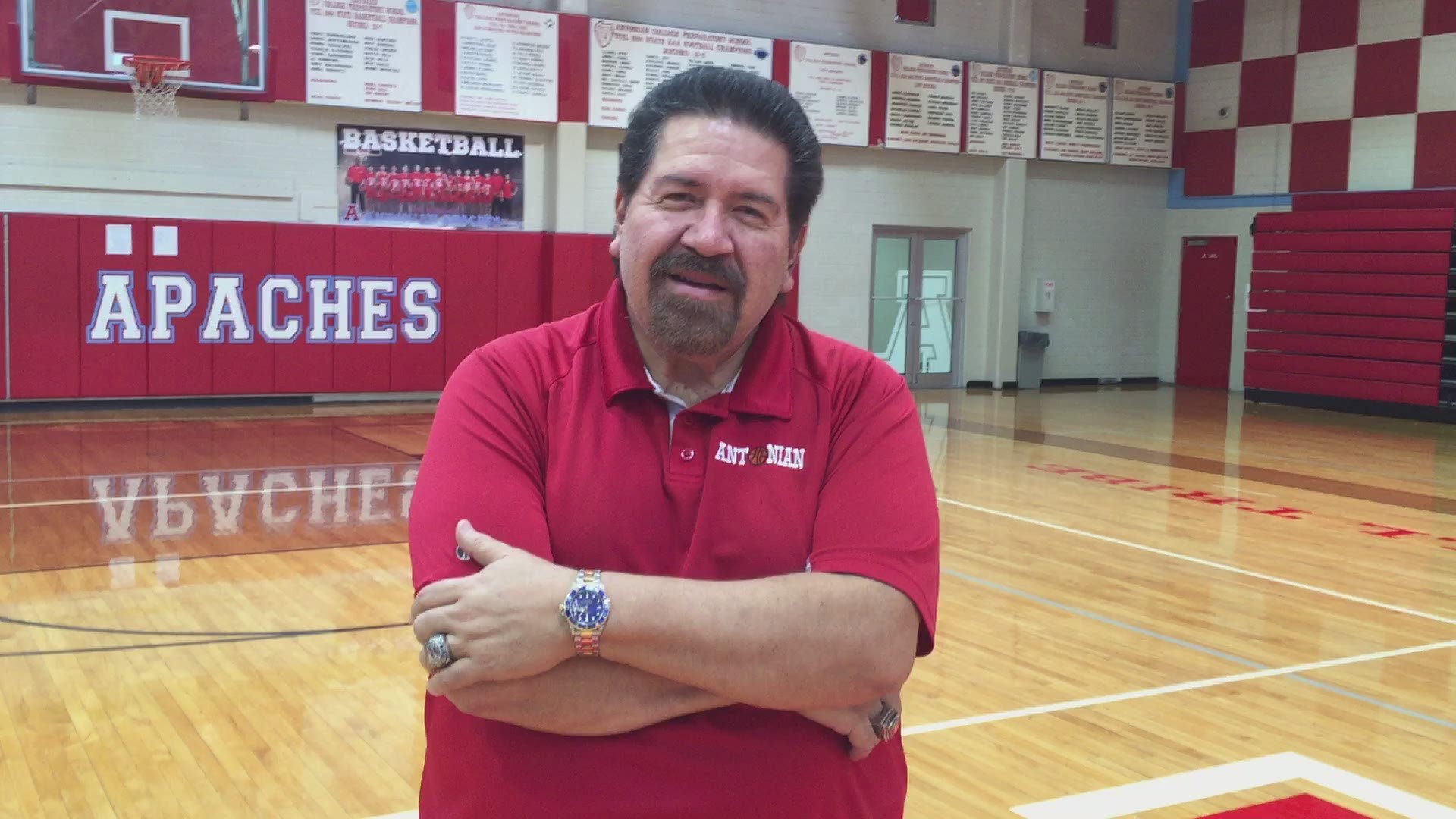 Credit: David Flores / Special to KENS 5
Bernal relished the opportunity to share the Apaches’ second championship season with former Burbank coach Herbert Jackson, who left the SAISD school last year. Jackson also had a long run with the Bulldogs, serving as head coach for 29 seasons after a two-year stint as an assistant to Art Gonzalez.

Bernal relished the opportunity to share the Apaches’ second championship season with former Burbank coach Herbert Jackson, who left the SAISD school last year. Jackson also had a long run with the Bulldogs, serving as head coach for 29 seasons after a two-year stint as an assistant to Art Gonzalez.

So what was it like for Bernal to have Jackson on the bench with him after facing him for so many years?

“It was awesome,” Bernal said. “I know he really enjoyed getting a taste of what it’s like to win state. I was really excited for him. I really enjoyed the opportunity to work together with Herb. We’ve been up against each for a long very time, so to be able to bounce things off of each other was awesome.”

Bernal said the last four years have been among the most enjoyable of his career.

“This group of kids with G and Bryon have been special,” he said. “We’ve had some great kids. It’s been nice to teach them the game and play the right way. Teach them about being gentlemen and being good citizens when they get out of high school.

“It’s not always all about basketball. We try to teach them all the other things about life, like integrity. All those things are important to being a good person. We do spend a lot of time in non-basketball issues and we want to make sure these guys have a good head start when they graduate.”

Jackson, 61, smiled broadly when he was asked how it felt to continue his career at Antonian. Here's more on what he had to say: 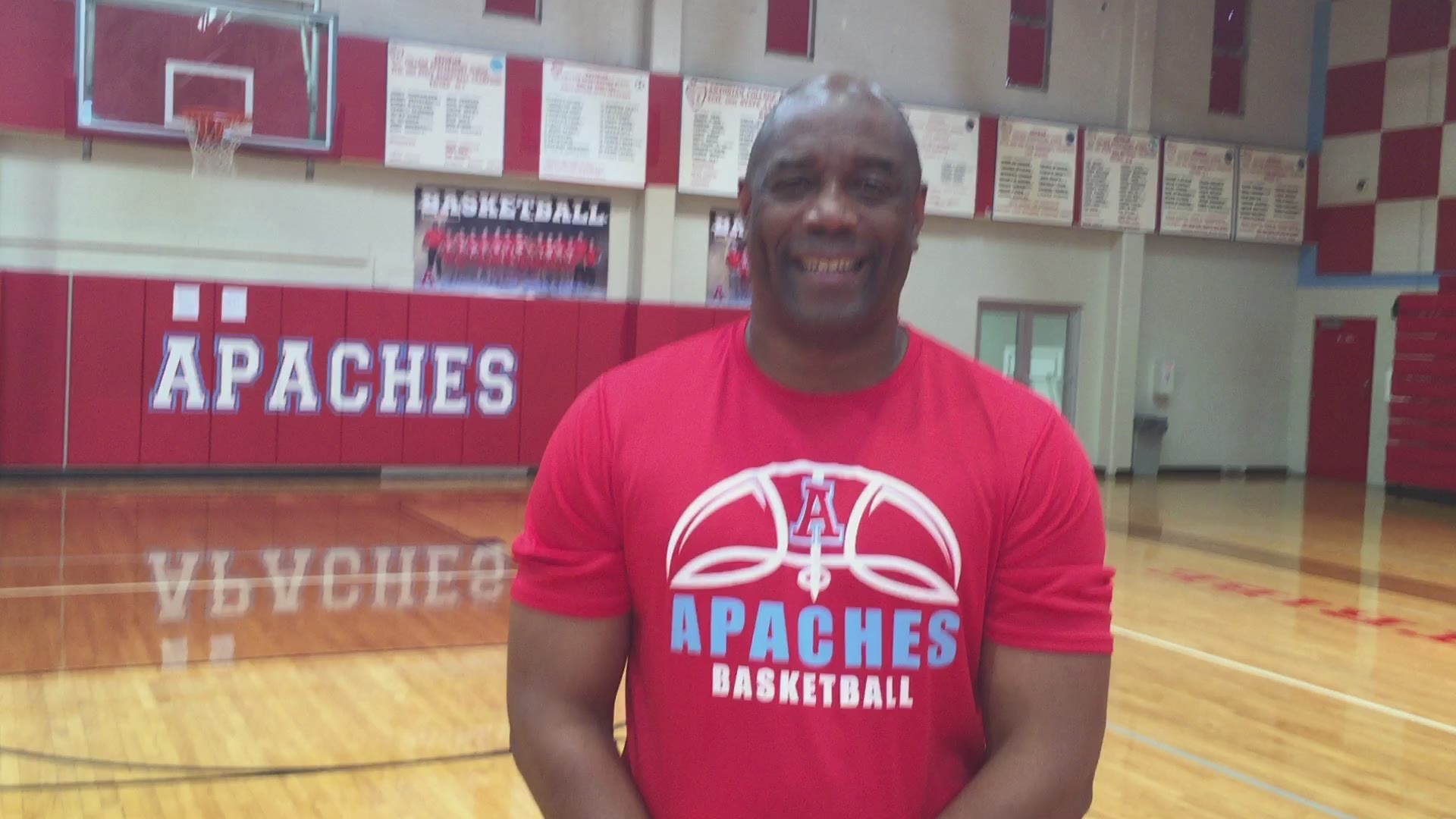 “It was great to burn the candle again,” Jackson said. “I tried to fit in and support Rudy when I got to Antonian. I didn’t want to mess up anything. Next thing I know, he’s asking me for my input. It was great to be around such a great group of kids. They get along, they work hard. I mean, what more can you ask for?”