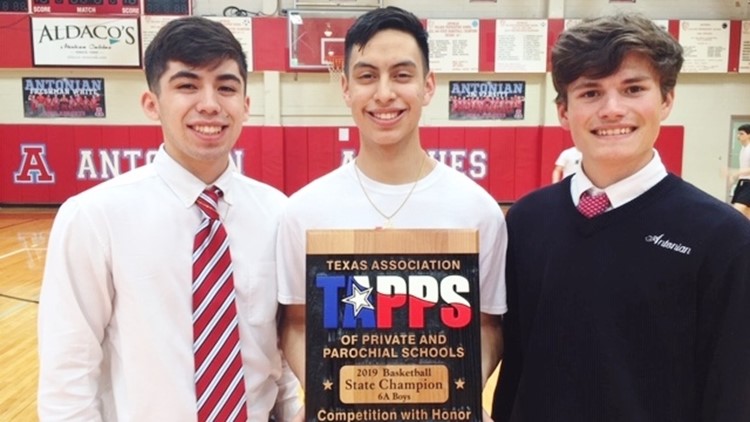 SAN ANTONIO — Long one of San Antonio’s most respected boys basketball coaches, Rudy Bernal woke up the echoes of Lanier’s glorious past during his 31 seasons at the inner-city public school.

Now at Antonian, which competes in the Texas Association of Private and Parochial Schools, Bernal led the 2018-19 Apaches to the TAPPS Class 6A state championship in his third complete season since succeeding Charlie Boggess early in the 2015-16 campaign.

Arguably the best boys team in Greater San Antonio this season, Antonian will be honored at halftime of the Spurs’ playoff game against the Denver Nuggets on Saturday at the AT&T Center.

“I think it’s nice for the Spurs organization to honor and recognize the kids in town that have done some good things,” Bernal said Saturday morning. “We really appreciate this honor. It’s nice to have an opportunity to make another memory. It’s an experience these kids will never forget.”

Antonian won state despite having a roster that included only three seniors. Bernal started one senior, three sophomores and one junior. And the top reserves were a sophomore and a junior.

The Apaches started the season 3-5 while four key players were still playing football, but then reeled off 25 consecutive victories after it had a full roster. The win streak ended with a 64-63 loss to rival Central Catholic on Jan. 19.

“Looking back, and I’ve told several people that I think that may have been the best thing for us,” Bernal said of the loss to the Buttons. “I mean, you don’t like to lose games. But when you start to put things in perspective and I told the guys, ‘You guys take things for granted, and you think you’re pretty good. But you’re not there yet.’

“I told them, ‘I’m not going to be Mr. Nice Guy anymore. I said, ‘You’re going to see a side of me you haven’t seen. I’m not going to let you get away with anything. I’ll be on your butt the whole time. That’s the way it’s going to be because that’s what you need.’”

Rudy Bernal, now boys basketball at Antonian, went 567-442 in 31 seasons at Lanier, where his father and an uncle played for coach Nemo Herrera.
Photo by David Flores / KENS5.com

The Apaches took Bernal’s words to heart, bouncing back with a 102-59 rout of Austin Savio. That victory started a nine-game winning streak capped by their 70-67 double-overtime victory against Plano Prestonwood Christian in the 6A title game March 1 in Waco. It was Antonian’s first state championship since 1999.

“We kind of took off after that loss to Central,” Bernal said. “We started playing better and better and better. We got to that last round in district, and we were playing well. We weren’t quite there yet, but I knew we were headed in the right direction.”

Antonian avenged the loss to Central with an 82-71 victory in the second round of district play and won the league title with a 5-1 record. The Apaches raised their game in the playoffs, opened the postseason with a 69-44 blowout of Katy Pope John XXIII.

“They had two 6-10 twins,” Bernal said. “They were pretty good, but they couldn’t keep up with us. At that point, I thought we had a shot (to win state). But we still weren’t playing our best.”

The Apaches followed the win over Pope John XXIII with an 82-75 victory over Houston St. Thomas, a team they had beaten in the Hays Tournament during the Christmas break.

“I knew they wanted our butts, since we beat them in the Hays Tournament,” Bernal said.

The Apaches beat St. Thomas 82-75 in the regional final at Victoria to earn a berth in the TAPPS state tournament. “That was probably the best game we’d played at that point,” Bernal said.

Antonian punched its ticket to the state final with a 70-55 victory over Tomball Concordia Lutheran, which had won the previous two 6A state titles.

“I saw them play Saint Mary’s Hall earlier in the day before we played St. Thomas in Victoria,” Bernal said. “They were good. I got to watch them and get a good scouting report on them. I got a good idea on what we had to do to beat them.”

Sophomore guards Gavino Ramos and Juan Reyna scored 17 points each to lead the Apaches’ scoring in the championship game.

“The thing I’ll always remember about this team is the bond that we had,” Ramos said. “We became very close.”

Forward Roman Ledesma, one of only three seniors on the team, pointed to a strong work ethic as a key factor in the drive to the championship.

“Every day that we came to practice, we knew what we had to do,” Ledesma said. “Our goal was to win the state championship, so we knew we had to work to get better, work together.”

“Nine of the 12 players on our roster are coming back,” Bernal said.

“We worked hard every day, especially on defense, because we’re a defensive team,” Reyna said. “We persevered to get better every day. Coach Bernal is a legend. He’s going to do his best to get the best out of his players. He motivates us.

“He’s going to get you to work hard and be tough on you when he needs to. But he also cares about you. I’d say he’s like my second dad. I to go him whenever I need something. He’s always there for us.”

Bernal retired from public education after the 2013-14 school year, and returned to Antonian as an assistant coach to Charlie Boggess in August 2014.

When Boggess resigned less than a week before Christmas in 2015, Bernal took over as interim coach and was hired as the Apaches’ next coach after the season. He has a 673-469 career record and is 106-27 at Antonian.

One of his former Lanier players, Lou Martinez, who played on the Voks team that reached the state final in 2001, joined Bernal’s Antonian staff as an assistant coach last August. The Apaches' other two assistant coaches are Manuel Martinez and Bob Briseno.

While the demographics between Lanier and Antonian are different, Bernal said he started seeing flashes of the Voks’ tenacity in the Apaches late in the season.

“Those Lanier players had guts,” Bernal said. “The Lanier kids ran through walls for you. They do what you ask them to do. Here, I can get kids to do that up to a point. I always sensed that they were holding back. The last 10 games of the season, I think I started to get that (tenacity) out of them.

“I think we started playing together, where it was more for ourselves a little bit earlier in the year. I think that’s one of the reasons we lost to Central. We tried to turn that around and they came on toward the end of the season."