Athletic trainers keep a close eye on players before, during and after practice. 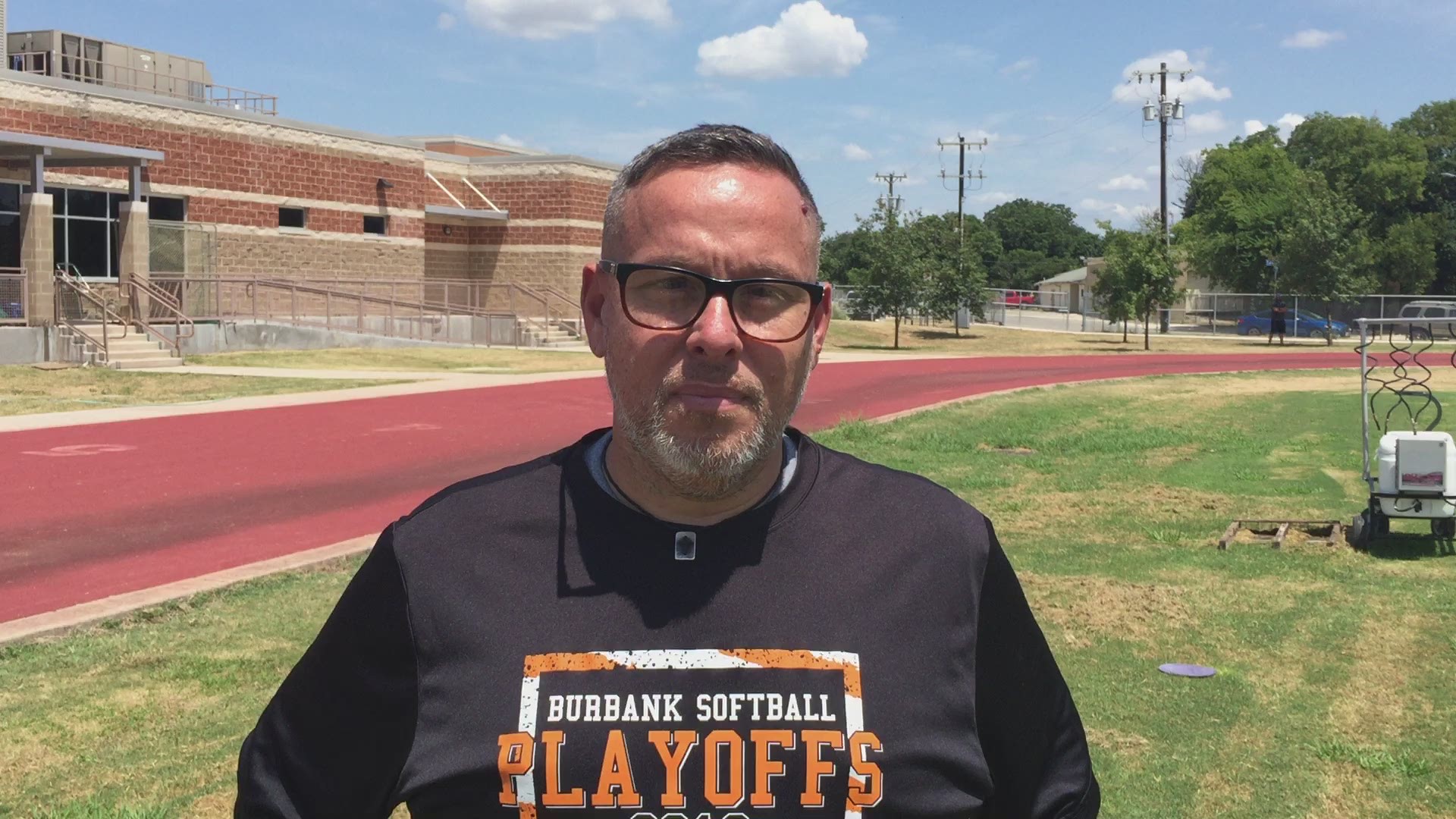 SAN ANTONIO – As the temperature hovered near 100 degrees Monday, the Burbank High School football team faced the heat with the same determination it takes on the field when the Friday night lights come on during the season.

"Gotta stay hydrated," one player said, as he took a water break during the practice. "We all worked hard this summer to get ready – but it's still tough."

Monday was the first day of workouts for schools in the University Interscholastic League, which governs extracurricular activities for the state's public schools. Teams that had spring training start practicing next Monday.

"Our kids did a great job of participating in our strength and conditioning program this summer, so that helps them when they come out here and have to face the heat," Burbank head coach Phil Barron said.

Unlike the old days when players were given very little water during workouts, student trainers keep the H2O flowing after practice starts.

"Obviously, water is there for them," Barron said. "It's accessible throughout the entire practice. They don't have to ask for water. If they want water, they get it."

Burbank head athletic trainer Billy Marshall and Charles Trevino, an assistant athletic trainer who works at Burbank and Brackenridge, supervise the student trainers and keep a close eye on players before, during and after workouts.

"Billy and Charlie they do a phenomenal job with our kids and educating our kids, educating the coaches, providing the water, whatever else we need," Barron said. "Those student trainers play a huge role in what they do and what Billy does as well." 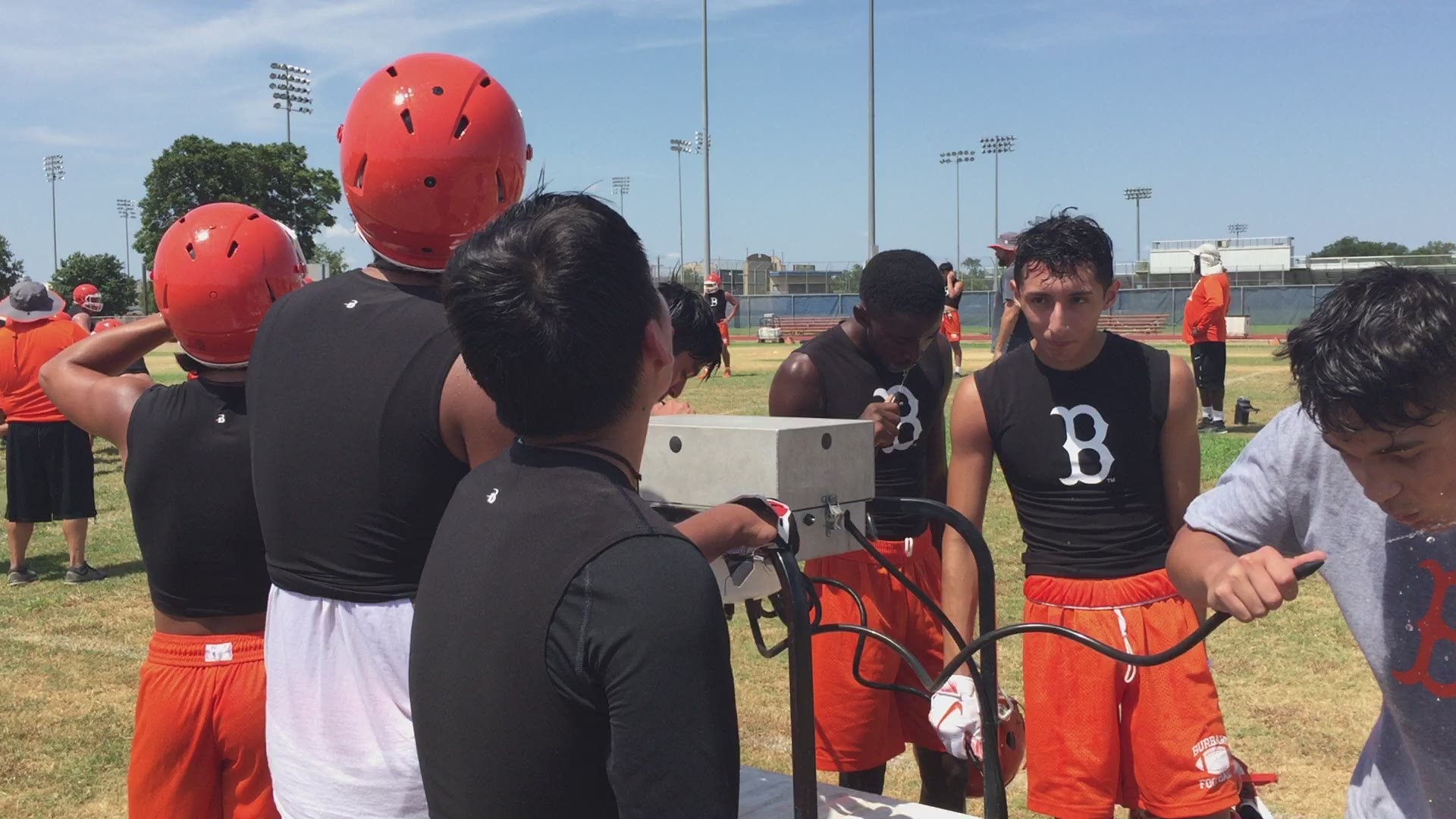 Marshall and Trevino also make sure the coaches stay hydrated.

"Coaches get out there and coach the whole time," Marshall said. "Then when it's time for a water break, they're moving and talking instead of getting water, so we make sure we take the opportunity to get out there and get them water, and remind them of the same thing. We have to make sure they stay hydrated, too."

A Highlands graduate, Marshall is starting his third year at Burbank and 27th as an athletic trainer. He worked 13 years at Floresville High School before taking a job in the San Antonio ISD.

Marshall works closely with athletes in all sports at Burbank, and has a special connection with the football players who have to practice in the scorching heat.

"Most of these kids have gone through our strength and conditioning program during the summer, so they're a little acclimatized to it already, instead of sitting at home sedentary inside," Marshall said. "That's our first thing.

"Then student trainers are well versed. We've got plenty of water access at all times. There are scheduled water breaks, but water is there anytime they need it."

Marshall and Trevino work the field during practice, looking for any signs that a player may be in distress.

"We're looking for, of course, the kid that's severely out of shape," Marshall said. "We can notice right away. We've educated the coaches on that, too. The biggest thing is, we err on the side of caution. If we think a kid is having a problem, we're going to pull him out and let him rehydrate.

"Our biggest issue at this time of the year is a kid gets out and works out all day, goes home, sleeps because he's tired and doesn't rehydrate, so they come back tomorrow and they're at three quarters of a tank of gas, instead of full."

Marshall said it takes everybody working together to prevent players from getting overheated.

"Student trainers are real good about walking up and saying, 'So-and-so doesn't look good.' Charlie and I have two sets of eyes, the coaches have several sets of eyes. That helps a lot."

The high school football season starts on Thursday, Aug. 29. Burbank kicks off its season against Pearsall on Aug. 29 at the SAISD Sports Complex.

Barron is starting his second season as the Bulldogs' head coach and third at Burbank. He was offensive coordinator for one season before getting promoted. The Bulldogs finished 6-4 last year, recording their first winning season since 2008.