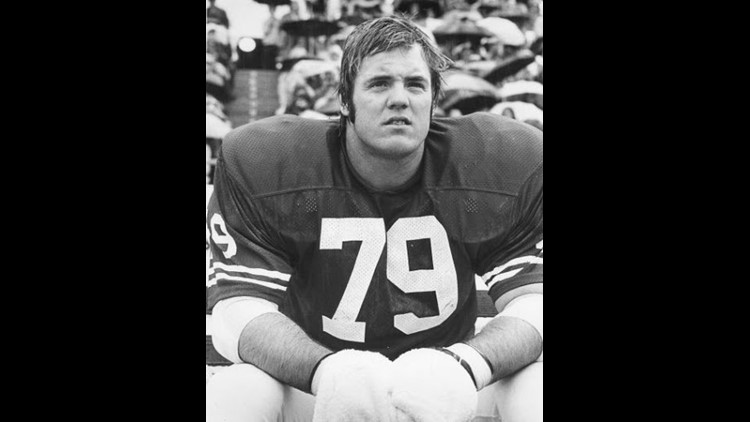 Photo by: Courtesy Photo
Terry Tausch, who graduated from New Braunfels High School in 1977, was an consensus All-America offensive tackle at Texas as a senior and sent on to play eight seasons in the NFL.

SAN ANTONIO — New Braunfels native Terry Tausch, a two-time All-America offensive tackle at Texas in the early 1980s and a Super Bowl champion with the San Francisco 49ers, died Wednesday night at his home in Plano.

Tausch's death was confirmed by his brother, Gary, who lives in New Braunfels.

"It was sudden," Gary Tausch said.

Terry Tausch, who graduated from New Braunfels High School in 1977, had turned 61 on Feb. 5.

"He was a great guy," Gary, 64, said. "He'd do anything for anybody. He was just a kind-hearted person. When he came back to New Braunfels to visit, he always got together with all of his friends. He never forgot where he was from.

"He was a super person to be around. He was a family-oriented guy. Loved to hunt and fish, and hang around with the family."

Tausch was a senior tight end and nose guard on the 1976 New Braunfels team that won the school's first district title in 26 years. The Unicorns went 10-3 in their third season under Jim Streety, losing in the state quarterfinals.

"Terry was on my first playoff team," said Streety, who coached at New Braunfels High for 17 seasons before going to Madison in 1991. "He was a two-way starter. That was the year we broke through. It was the first time New Braunfels had made the playoffs since 1950."

New Braunfels native Terry Tausch was a two-time All-America offensive tackle at Texas before going on to an eight-year career in the NFL.
Courtesy Photo

Streety said he and Tausch kept in touch regularly by phone.

"He and I have stayed close," Streety said. "In fact, I just talked to him about a month ago. We've been close through the whole thing. The year the 49ers won the Super Bowl, I was in San Francisco for the American Football Coaches Conference that year. He and his wife took Janie (Streety's wife) and I out to dinner.

"He is definitely one of the guys I've remained close to over the years. There are a lot of reasons for that, but the main one was that I was close to his family. I was close to his mom and dad. They were both very supportive of the coaches and athletic program."

Besides being a football standout at New Braunfels, Tausch played on the baseball team and was an outstanding shot putter on the track and field squad. He still holds the school record in the shot put.

"That's probably the oldest record on our record board," Streety said. "He was a 60-foot shot putter. He was just a great guy that came from an old-time New Braunfels German family. His parents had a little business in town. They were just salt of the earth."

Gary, who also played football at New Braunfels, and Terry were the only children born to Ora Mae and Lawrence Tausch, both deceased.

Highly recruited as a football player his senior year, Tausch signed with Texas in 1977 and was a redshirt freshman in coach Fred Akers' first season as head coach.

Tausch continued UT's tradition of producing top-notch offensive linemen, earning consensus All-America honors in 1980 and 1981. He was inducted into the UT Athletics Hall of Honor in 2001.

Tausch was selected by the Minnesota Vikings in the second round of the 1982 NFL Draft with the 39th overall pick. He played seven seasons (1982-88) with the Vikings, starting 68 of the 81 games in which he played.

One of Tausch's teammates in Minnesota was quarterback Tommy Kramer, a 1973 Lee graduate who played 13 seasons (1977-89) with the Vikings.

Tausch played his final season in 1989 with the 49ers, who capped that campaign with a 56-10 shellacking of the Denver Broncos in Super Bowl XXIV.

"He got a ring playing with Joe Montana," Streety said.

Tausch settled in Plano after retiring and was working in medical sales at the time of his death, Gary said. Terry and his wife, Ela, had two sons, Nicholas and Eric. Nicholas and Eric played college football at Notre Dame and TCU, respectively.