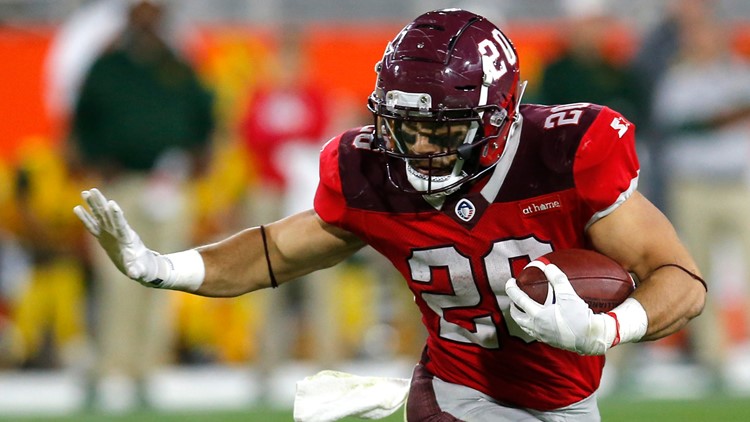 ATLANTA — The San Antonio Commanders scored early and never trailed as they defeated the Atlanta Legends 37-6 in front of 10,619 people at Georgia State Stadium on Sunday afternoon. The Commanders (4-2) set a season-high in points by scoring 37, and the defense matched its best performance of the year by holding the Legends (2-4) to just six points.

The Commanders defense picked off Atlanta QB Aaron Murray three times and also recovered a fumble. The special teams added a punt return TD and the Commanders offense took care of the rest. At one point, the Commanders forced turnovers on three straight Atlanta possessions.

Logan Woodside completed 74 percent of his passes for 164 yards and 2 touchdowns for San Antonio. Kenneth Farrow II added a rushing TD and 35 yards on the ground for an offense that didn't have to do much to get the win.

Hear the team talk about their third straight win:

San Antonio returns to the Alamodome from its four-game road trip on Saturday, March 23 as hosts to the Salt Lake Stallions. The game, which will start at 7 p.m. CT, will be televised on NFL Network.

Defense wins championships! The Commanders stuffed a Legends drive at the goal line, then later took an interception to the house, essentially icing the game with 8:40 to play. Derron Smith grabbed the pass and took it 87 yards the other way. It was the third interception thrown by Aaron Murray of Atlanta. The Commanders added the two, making it 37-6.

After three, the Commanders lead 29-6.

The Commanders started with possession in the third quarter and advanced to the red zone, but had to settle for a field goal. Nick Rose's kick from 23 yards was good, widening the San Antonio lead to 29-6.

Other than that kick, the third quarter saw no other points, but Atlanta finished the quarter on a drive into Commanders territory.

At halftime, the Commanders lead 26-6.

The third play of the second quarter saw the Commanders find the endzone again. This time, it was a 5-yard pass from Logan Woodside to Mekale McKay. The Commanders tacked on the two-point conversion, making it 14-0.

Again, the Legends drove the ball near midfield before another interception, this time by De'Vante Bausby. Bausby now leads the AAF with 4 interceptions. The Commanders scored less than 30 seconds later, with Logan Woodside finding Evan Rodriguez for a 33-yard TD. Even though the Commanders failed the two-point attempt, 20-0 is a dominant lead. Remember: there are no PAT kicks in the AAF!

The Legends eventually scored, making it 20-6, but San Antonio made the play of the day on special teams, as Greg Ward Jr. returned a punt 79 yards for a touchdown. Woodside was sacked on the two-point attempt, but getting the lead back up to 20 points was huge. That 79-yard return also goes down as the longest punt return TD in AAF history.

After one, the Commanders lead 6-0.

After a dull opening possession for each team, the Commanders forced a fumble on the Legends' first play of the second drive. It didn't take long to turn that into points. Kenneth Farrow took a handoff 13 yards for a TD, making it 6-0 on a one-play drive.

Atlanta's next drive got close to midfield, but was ended by a Zack Sanchez interception, his third of the season. The Commanders' ensuing drive took the clock to the end of the first quarter, but they were moving the ball.