AAF GAMEDAY: Ante goes up for Commanders in clash against Orlando Apollos

The matchup features Orlando's high-powered offense against a San Antonio defense that had three picks and six sacks in last week's opener. 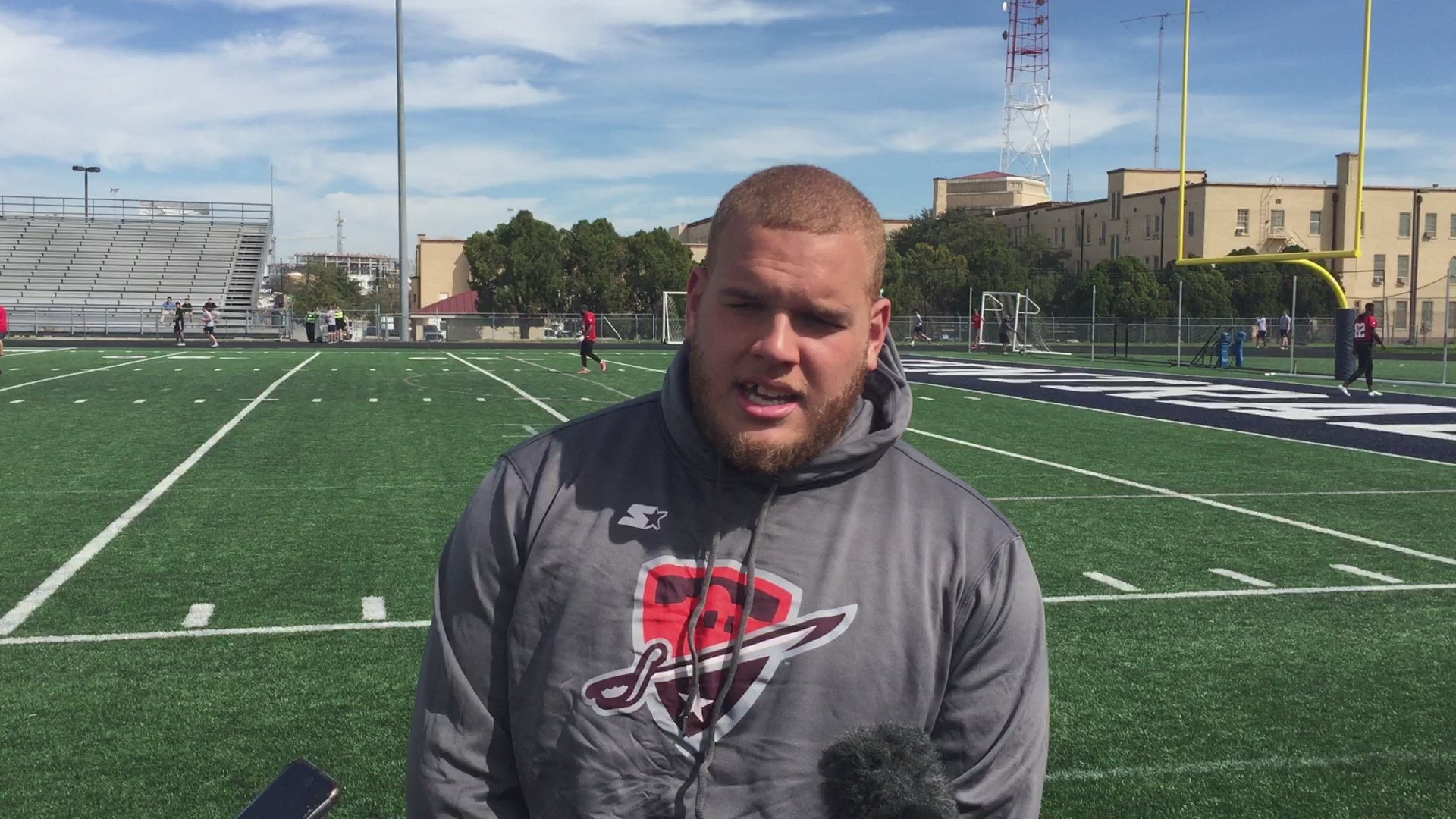 Notable: Sunday's game will mark the first time longtime coaches Steve Spurrier and Mike Riley face off as head coaches. They have been on opposite sidelines only once, in 2002, when Riley was assistant head coach with the New Orleans Saints and Spurrier was the Washington Redskins' head coach. The Saints beat the Redskins 43-27... After hosting Orlando, the Commanders play their next four games on the road. The Alamodome already was booked for three of the next four weekends when the Alliance of American Football was setting schedules for the league's inaugural season. The Commanders won't play another home game until March 23, when they face the Salt Lake Stallions...The Commanders and the Apollos are two of eight teams in the AAF. The six other teams, with the head coaches in parentheses, are the Atlanta Legends (Kevin Coyle), Arizona Hotshots (Rick Neuheisel), Birmingham Iron (Tim Lewis), Memphis Express (Mike Singletary), Salt Lake Stallions (Dennis Erickson) and San Diego Fleet (Mike Martz). The Commanders will compete in the Western Conference with Arizona, Salt Lake and San Diego...Each AAF team will play a 10-game regular season. The top two teams in the Eastern and Western conferences will advance to the playoffs, with the championship game scheduled for Sunday, April 28, in Las Vegas.

SAN ANTONIO – You’ve heard the time-honored sports axiom about offense selling tickets and defense winning championships. But what happens when a team is outstanding in both?

Therein lies the challenge the Commanders will face when they host the Orlando Apollos in an Alliance of American Football game Sunday at the Alamodome.

While San Antonio relied on its defense to beat the San Diego Fleet 15-6 in last week’s season opener, Orlando was impressive on both sides of the line of scrimmage in a 40-6 rout of the Atlanta Legends.

“We’re going to have to score and we’re going to have to play good defense,” Commanders coach Mike Riley said this week. “They’ve got some good variety in what they do offensively and they’ve got a good defensive team. They held somebody to six points, which is hard to do. Anyway, I think this (Orlando) is a good team and appears to be one of the better ones in the league.”

The Commanders’ defense was outstanding itself, finishing with three interceptions and six sacks. Safety Orion Stewart of Baylor and linebacker Shaan Washington of Texas A&M led the defensive charge. Stewart finished with six tackles, one interception and two pass deflections, and Washington had two sacks.

Washington also had the hit of the game, separating San Diego quarterback Michael Bercovici from the ball and his helmet with a bone-jarring sack in the first quarter.

The ante will go up against an Orlando offense that reflects head coach Steve Spurrier’s philosophy of wide-open football. The Apollos are quarterbacked by Garrett Gilbert, a Lake Travis High School graduate who began his college career at Texas and passed for 6,460 yards in two seasons at SMU after transferring. 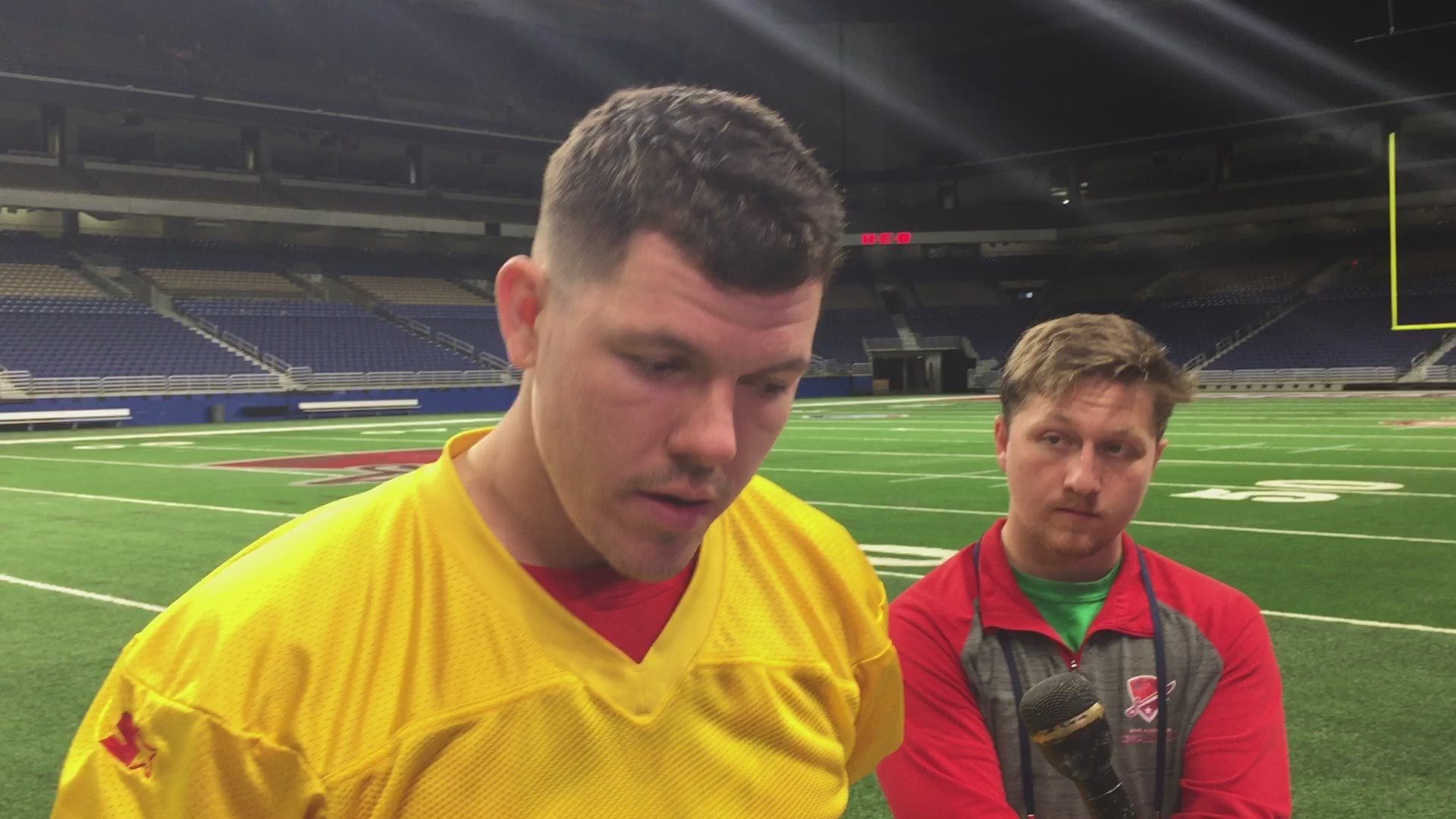 Gilbert threw for 227 yards and two touchdowns in last week’s opener. Orlando finished with 363 yards of total offense, with 137 coming on the ground.

“They put up some points,” Commanders defensive end Winston Craig said. “They’re a very good team. They’re very solid in the offensive line. I’m going to let the DBs (defensive backs) handle the receivers, and up front we’re going to make sure we handle our job with the o-linemen. Go from there.”

As is usually the case, the game will be won up front, where the key matchup will be the Apollos’ offensive line going against the Commanders’ D-line.

“I’m looking forward to it a lot,” Craig said. “Anytime you go against good competition, that’s the most fun. It should be a fun game.”

Asked about the team’s preparation this week, Craig said: “Great week, great week. Came out here and flew around. Got everything we needed to get done.”

The Orlando defense had three sacks and six quarterback hurries last week. It held Atlanta to 224 yards – 80 rushing and 144 passing.

“Coach Spurrier has done a great job with them,” San Antonio quarterback Logan Woodside said. “They’re really physical up front. Defensively, very fast in the secondary and up front, so it’ll be a big challenge for us for sure. They created some big turnovers in that game and helped propel them to that win.”

Credit: Photo by Antonio Morano (bit.ly/XR79FT) / Special to KENS5.com
Commanders safety Orion Stewart intercepts a pass he returned for 68 yards in the 15-6 victory over the San Diego Fleet on Feb. 9 at the Alamodome.

The Commanders outgained the Fleet 364-295 in total offense, finishing with 125 yards rushing and 239 passing. Woodside completed 18 of 36 passes for 255 yards, but had two passes picked off. One of the interceptions was in the San Diego end zone.

San Antonio led the AAF in attendance last week, drawing 27,857 at the Alamodome. Given the buzz about the Commanders throughout the city after their victory, a bigger crowd is expected this week.

Woodside said the atmosphere was “electric” for the franchise’s inaugural game.

Craig expressed his gratitude to the fans for their support.

“The more the merrier,” Craig said, smiling. “Just got to thank San Antonio for that. They came and showed support. We couldn’t have won without them, so it was very appreciated.”

After Sunday’s game, the Commanders play their next four games on the road. They play at San Diego in a West Division game next Sunday.