Brennan, Warren are expected to nab the other two playoff berths in the 10-team district. 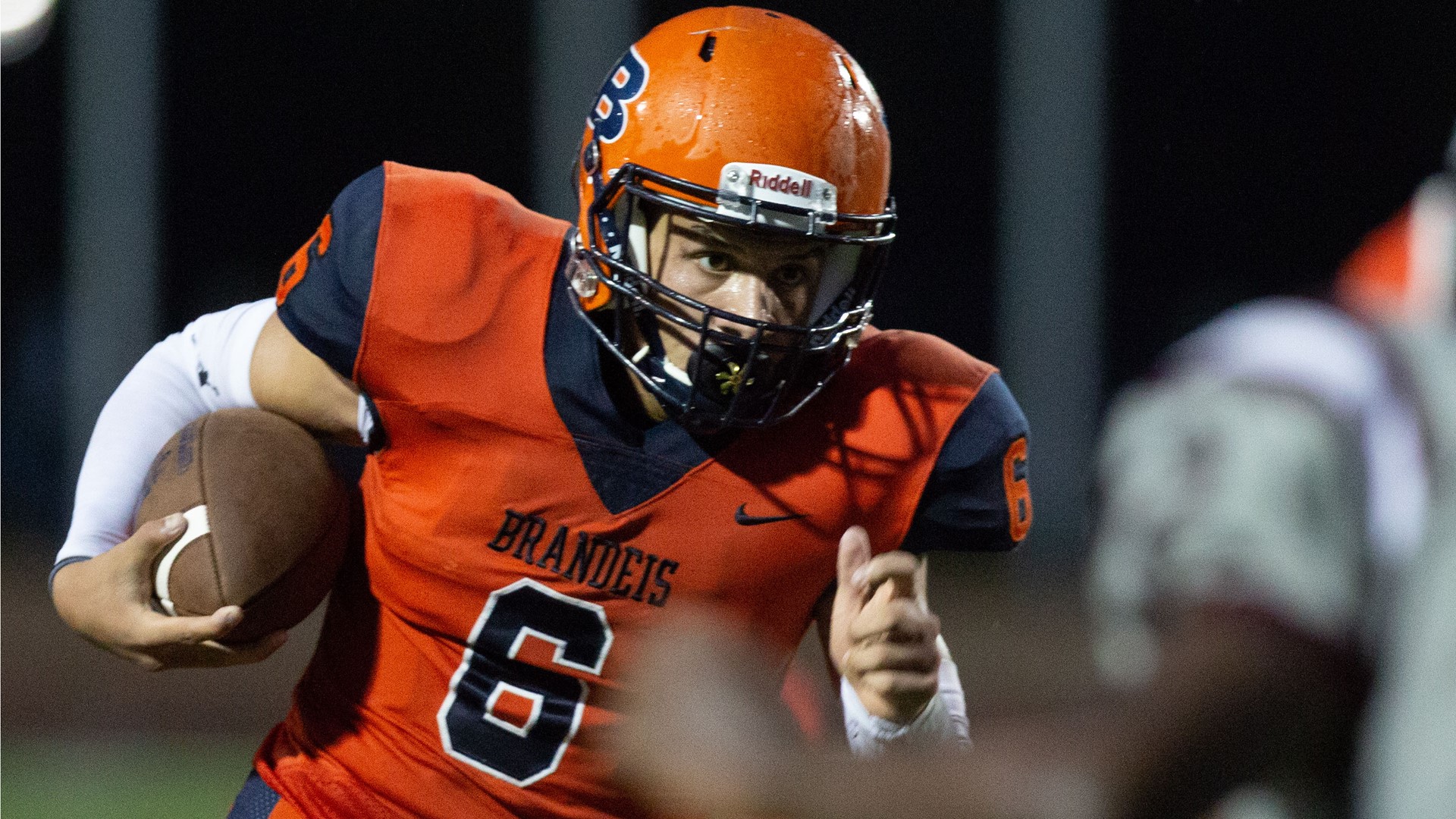 Here is a breakdown of each team in District 28-6A: 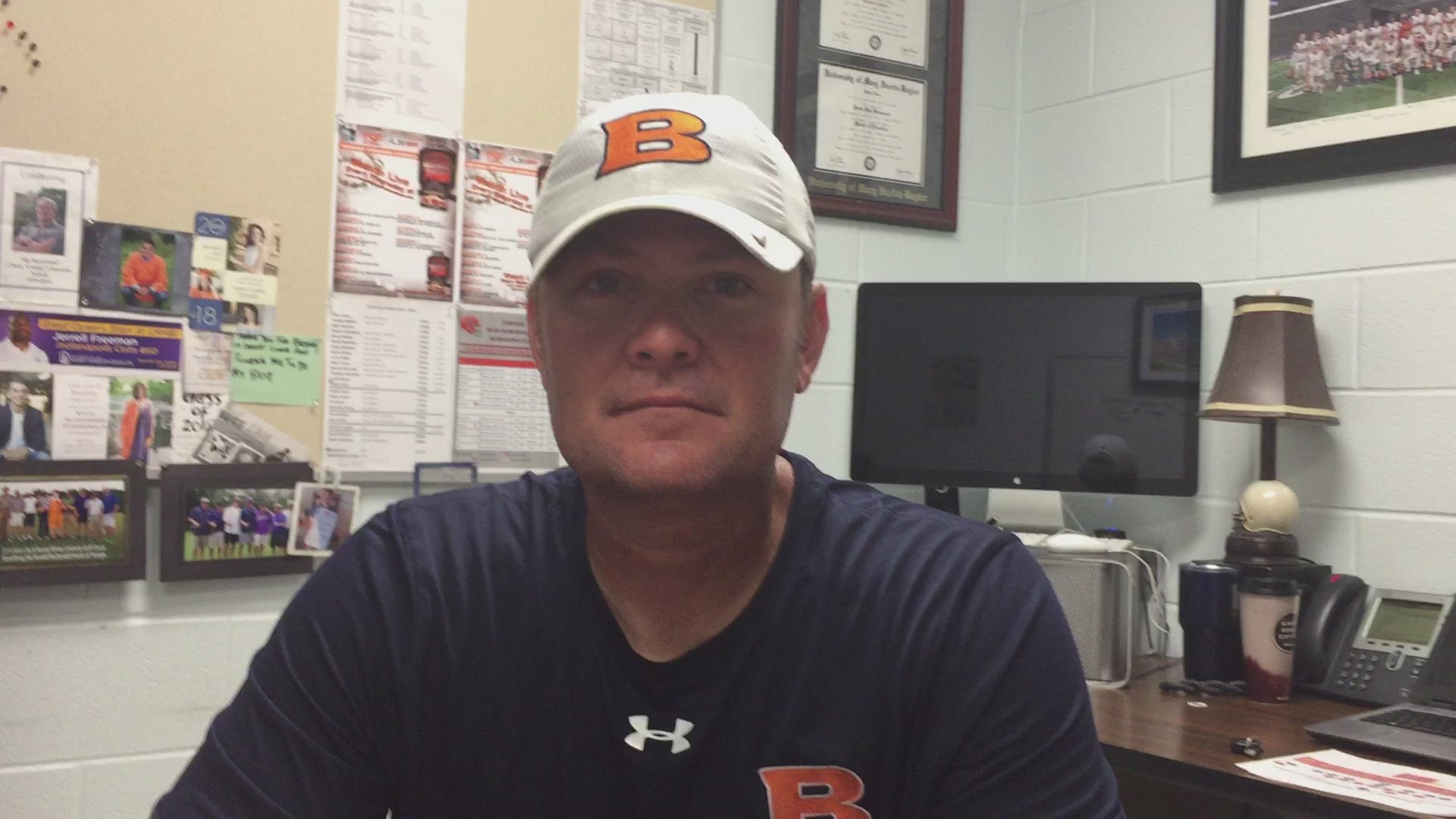 Outlook: Brandeis junior quarterback Jordan Battles and senior cornerback Frank Wilson IV rank among the best players in the San Antonio area. A classic dual threat, Battles broke the school record for all-purpose yardage as a sophomore last year. He passed for 1,844 yards and 18 touchdowns and rushed for 1,646 yards and 21 TDs while helping lead the Broncos to the state quarterfinals. The son of UTSA coach Frank Wilson, Wilson recorded 118 tackles and made six interceptions last year. He committed to UTSA in April. Tight end Kris Bowen and wide receiver Josh Juarez, who had 22 receptions for 335 yards and four TDs as a sophomore last season, will give the offense a boost. Junior Angel Lopez, who started every game as a sophomore, will anchor the offensive line. Lineman Alex Trevino, who had 67 tackles and seven sacks last season, will help lead the defense. With Wilson, junior defensive back Jalen Rainey and sophomore cornerback Aiden Inesta-Rodriguez returning, the secondary will be one of the strengths of the team. Rodriguez had 68 tackles and three interceptions last year and Rainey finished with 42 tackles.

Last playoff appearance: 2018, lost to Reagan 30-7 in 6A Division I bidistrict 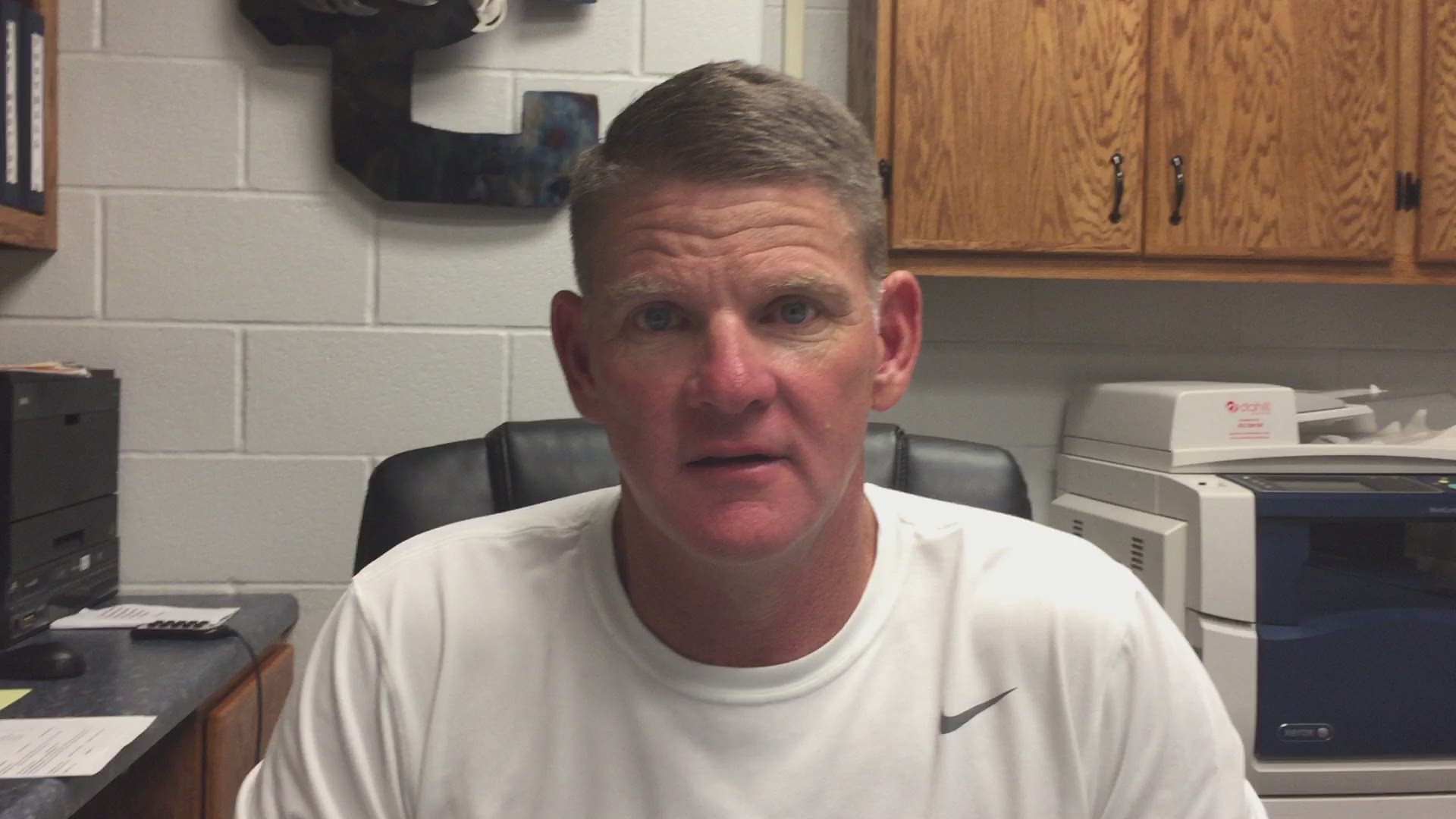 Outlook: O’Connor has been on a roll the past three seasons, winning three district titles and going 32-4. The Panthers have finished the regular season 10-0 each of the past two years, and advanced to the state semifinals in 2017 before falling in the first round of the playoffs last season. Starting its 10th season under head coach David Malesky, O'Connor will be in the thick of the district race once again. The Panthers, who return 14 starters, have made the postseason each of the past 15 seasons. Offensive lineman Logan Parr, who has committed to Texas, headlines the list of O'Connor returnees. Parr and his buddies up front will clear the way for running back Zion Taylor, who rushed for 1,044 yards and 10 touchdowns last year. Also back is steady quarterback David Dodd, coming off a season in which he passed 1,739 yards and 15 TDs. His primary target will be wide receiver Sam Castillo, who had 46 receptions for 433 yards and four TDs last year. Lineman Pryson Greer, back Jack Jennings and cornerback J'onta Waller are the players to watch on defense. Jennings had 68 tackles last year, and Waller and Greer finished with 45 and 37, respectively. Greer also had two sacks and one interception.

Last playoff appearance: 2018, lost to Austin Westlake 49-7 in 6A Division II second round 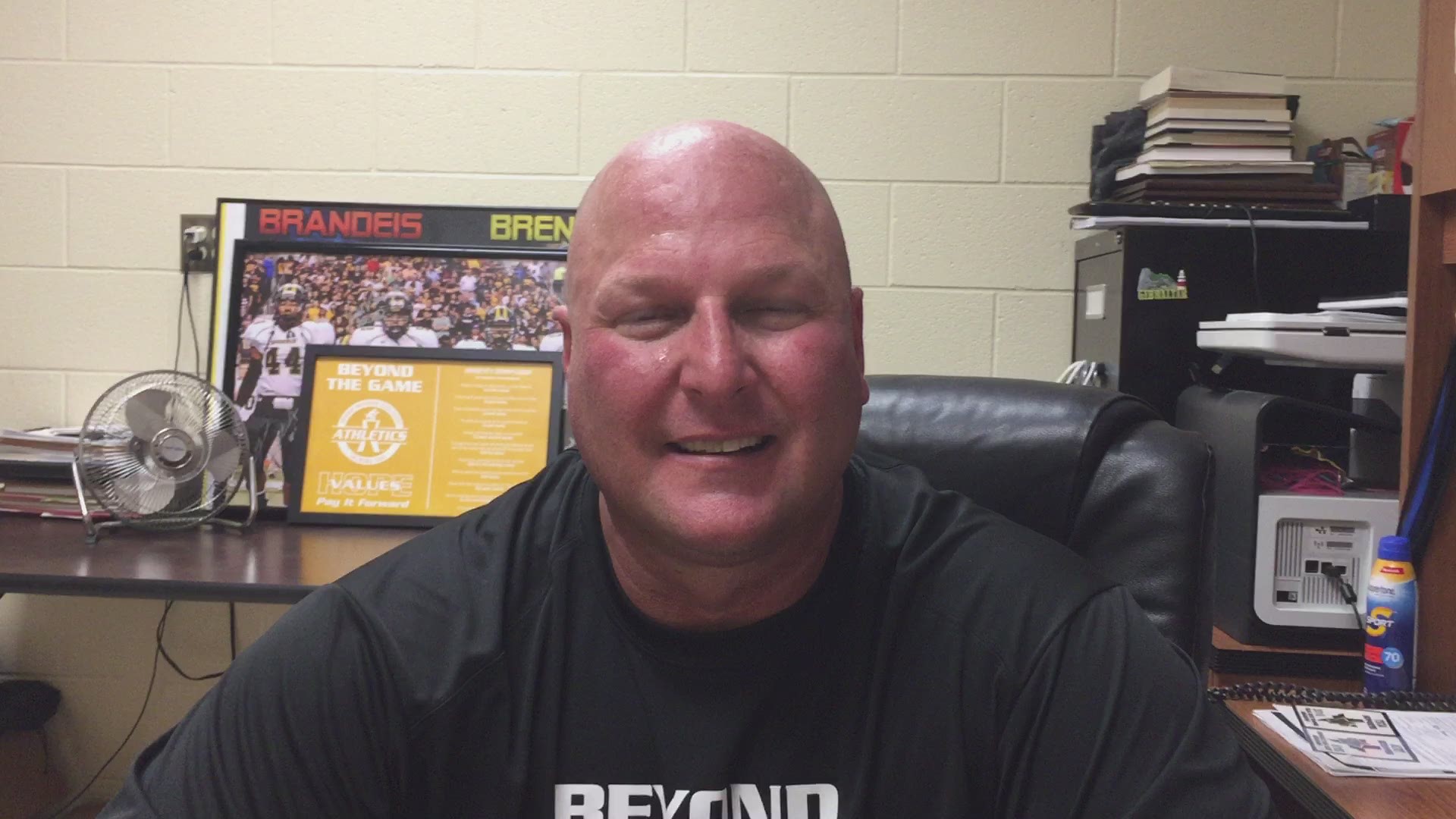 Outlook: Brennan has advanced to the playoffs eight straight years after going 0-10 in its first varsity season in 2010. Preparing for their 10th season under Steve Basore, the only head coach in the history of the program, the Bears figure to battle defending champ O'Connor and favorite Brandeis for the district title. Brennan established a winning tradition quickly, reaching the state final in the UIL's second-largest classification in 2013, and winning four consecutive (2012-15) district titles. One big plus for the Bears this season is the return of steady quarterback Jordan Flores, who passed for 2,234 yards and 23 touchdowns as a junior. Running back/wide receiver Darryon Tolefree is also back after finishing last season with 695 yards and eight TDs receiving and 424 yards and two scores rushing. A cornerback as a junior, Keion Thomas was moved to wide receiver in the offseason and should be a dependable hand on offense. Senior Ethan Leyva is another good wide receiver. Linemen Shaquan Flagg and Ryan Curtis will anchor both lines. Curtis had 48 tackles and five sacks last season. Junior linebacker Justino Escobar and junior strong safety Donovan Dreighton and junior cornerback Caleb McGarity will head the defense. Escobar had 58 tackles and two interceptions last season and Dreighton finished with 34 stops and one pick.

Coach: Jeff Robbins, 8-3 in one season as head coach at Warren

Last playoff appearance: 2018, lost to Madison 35-7 in 6A Division I bidistrict 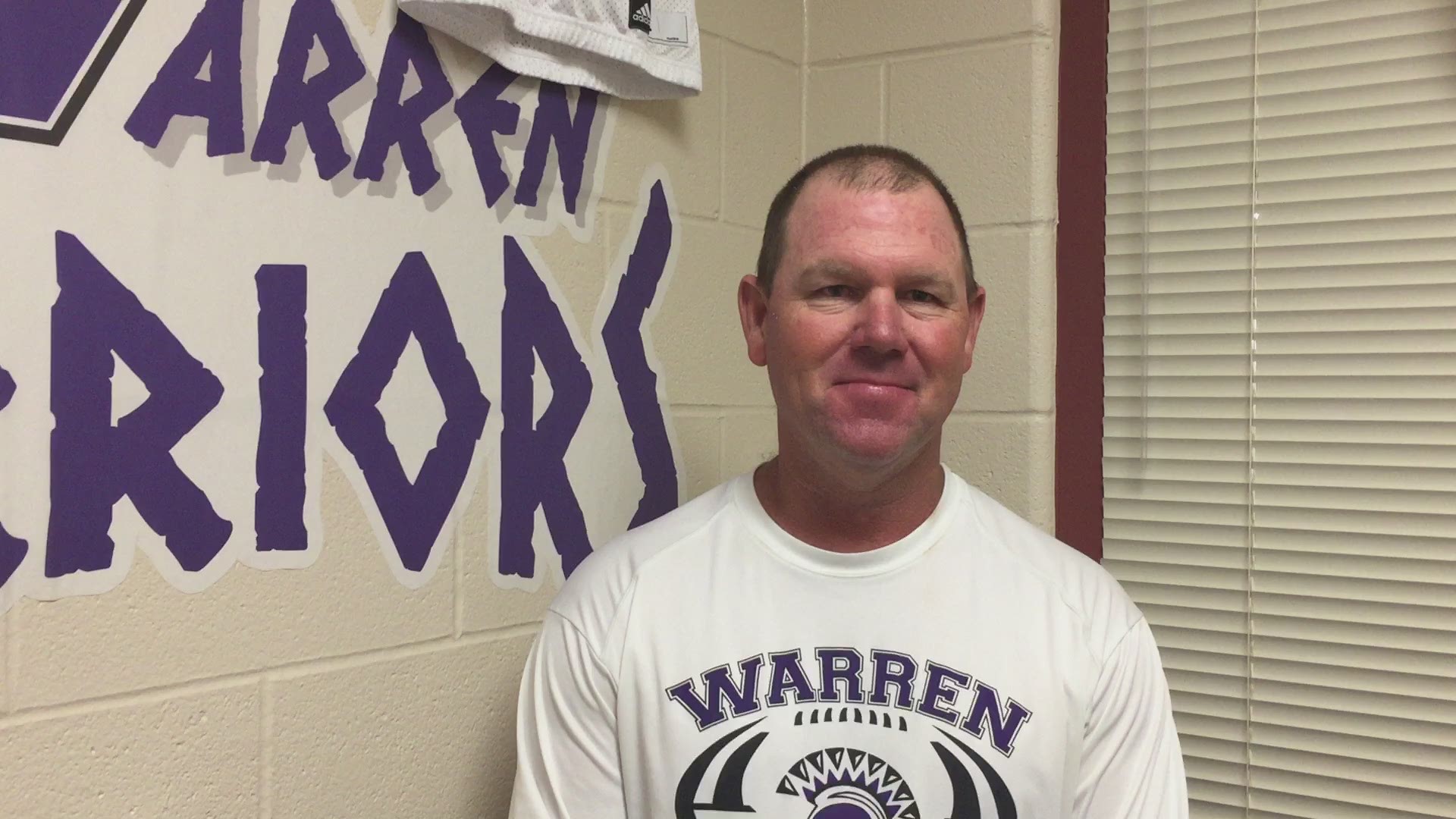 Outlook: Warren made the playoffs and went 8-3 under first-year head coach Jeff Robbins, who was the Warriors' defensive coordinator for nine seasons before taking over the program when Bryan Dausin resigned. Dausin had coached Warren since the school opened in 2002. The Warriors return eight offensive and nine defensive starters from a team that tied Brennan and Brandeis for second in last year's District 28-6A race. The strength of the team going into the season will be its defensive front, where it returns the stout foursome of Kenton Brown, Darionte Mercer, D'Angelo Ortiz and Keagan Pine. Robbins also will be glad to welcome back quarterback Anthony Cisneros, who passed for 1,158 yards and 15 touchdowns and rushed for 451 yards and four TDs last year. Running back Samuel Stanford also contributed to the offense, rushing for 489 yards and six TDs and catching two TD passes. Te'lem Turner, also will help fuel the running game. Turner rushed for 333 yards and four TDs as a sophomore last season. Warren has made the playoffs each of the last three years after missing the cut in 2014 and 2015. 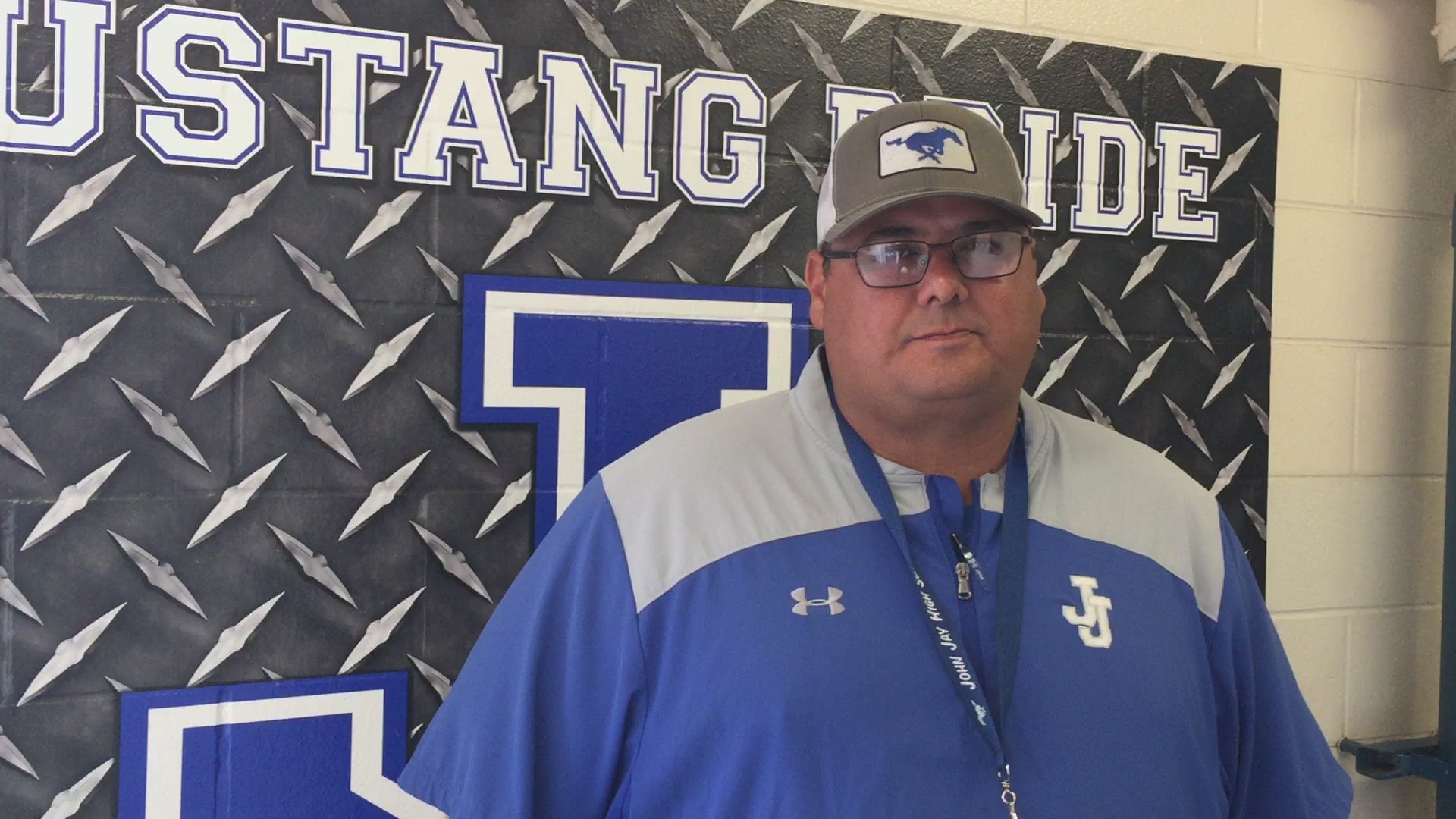 Outlook: Jay slipped to 6-4 last year and missed the playoffs after making the cut in 2017 and finishing 7-4. The Mustangs hadn't put together back-to-back winning seasons since 2005-06. They started a streak of eight losing seasons in 2009 and hit rock bottom with an 0-10 finish in 2016. Jay returns 10 starters, five each way, from a team  that finished fifth in district play last season. Among the returnees is senior Danny Amezquita, who will start at quarterback after playing wide receiver last year. The Mustangs also have three talented receivers back, led by Marcus Alcarez, who finished last season with 30 receptions for 468 yards and one touchdown. Jaden Brewer and Adrian De La Garza are the other receivers returning, and sophomore Xadrian Huerta is a promising slot receiver. The defense will be led by a secondary that returns Sanford Jones, Andrei Mobley, Justyce Sheridan. A free safety, Sheridan finished his junior season with four interceptions. Gary Gutierrez (22-38) is starting his seventh season as Jay's head coach. After going 5-4 in district last year, the Mustangs have a chance to be better and challenge for a playoff berth.

Last playoff appearance: 2015, lost to Smithson Valley 35-0 in 6A Division I second round

Outlook: A Marshall assistant the past two seasons, Anthony Boykin was hired as head coach at Stevens in early May. He succeeds Conrad Hernandez, who left the Falcons after two seasons to become an assistant athletic director with the Northside ISD. The head-coaching job is the second for Boykin, who went 6-14 in two seasons (2014-15) at Seguin. Stevens was 7-13 in its two seasons under Hernandez, who had been on the coaching staff since the school opened in 2005. The Falcons were 4-6 last year and haven't had a winning season since 2015. This year's team will be led by offensive lineman Christopher Bolling and defensive tackles Noah Caballero and Josh Gonzalez. Caballero had three sacks as a junior last year. Strong safety Eli Alexander is the team's leading returning tackler with 106 stops. Greg Zaragoza, who played as a sophomore last year, will take over the starting quarterback spot. Chris Jones, Josh Lopez and Ethan Morales are Stevens' top wide receivers. if the offense can come around, the Falcons could get back on the winning track this season.

Credit: David Flores / KENS5.com
Marshall will rely on such players as junior linebacker Richard Flores, left, and senior wide receiver Christopher Tobias to get back on the winning track this season. 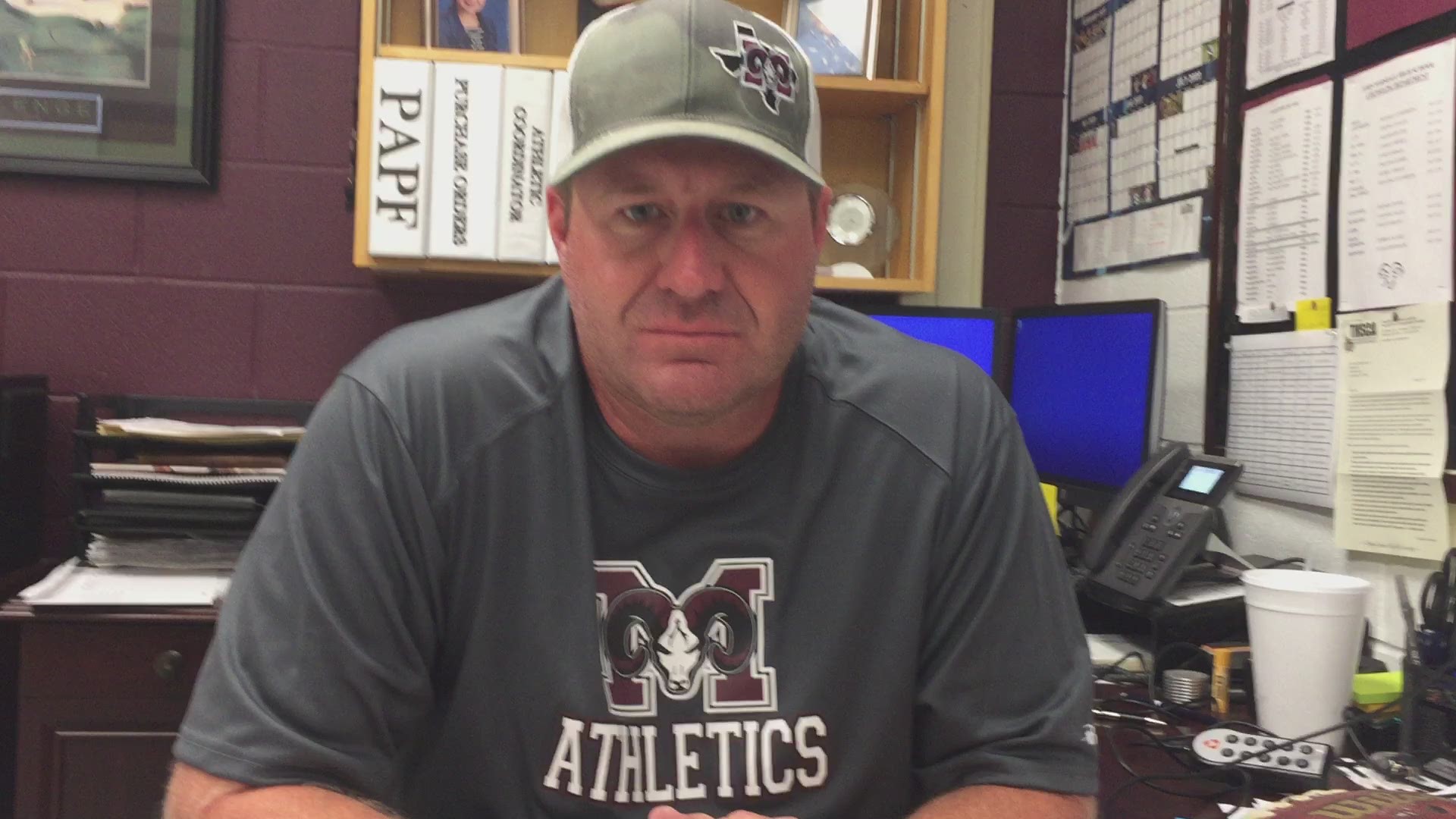 Outlook:  A state finalist in 1991 and state semifinalist in 2000, Marshall has gone 12 years since its last winning season in 2006. The Rams crashed to 0-10 in 2015 and have gone 7-23 in the past three seasons. Seven offensive and six defensive starters from last year's 2-8 squad return to try to get Marshall back to respectability. Running back Marcellus Davis, who rushed for 363 yards and six touchdowns last year, is among the offensive returnees. Wide receiver Zane Zuniga is also expected to help the offense move the chains. Jace Martin, a three-year starter, will lead the offensive line. A wide receiver on the varsity as a sophomore last season, Dylan Cooper could take over the starting quarterback spot. Linebacker Richard Flores and free safety Chris Tobias are the ringleaders on defense. Tobias and Flores had 114 and 99 tackles, respectively, last season.

Coach: Ricky Stade, 3-7 in one season at Taft 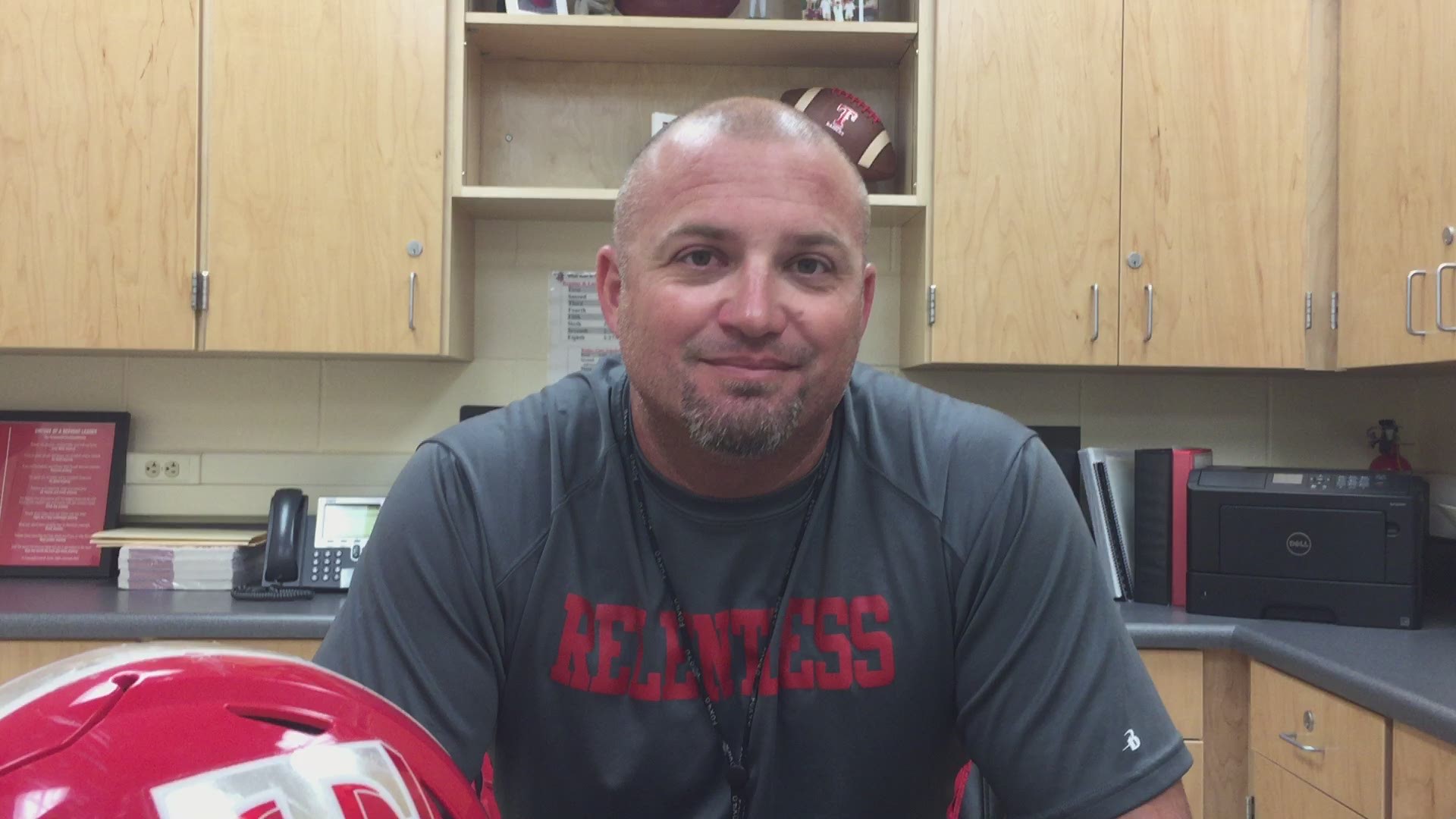 Outlook: Taft has suffered through nine straight losing seasons since finishing 5-5 in 2009, and hasn't finished above .500 since going 10-4 in 2004. That's 13 losing seasons in the past 14 years. Raiders finished 3-7 last year in their first season under Ricky Stade, who was defensive coordinator at O'Connor before succeeding Brian Davenport. The list of Taft veterans this season is headlined by linebacker Markel Turner, who had a whopping 16 sacks last year and finished with 88 tackles. Led by quarterback Josue Ibarra and running backs Meikhi Martin and Diego Martinez, the Raiders return a solid core of skilled players. Martinez rushed for 472 yards and five touchdowns and had 149 yards receiving and one scoring reception as a sophomore last year. Ibarra passed for 410 yards and three TDs despite missing time with injuries last season. Dependable wide receiver Brandon King, who had 436 receiving yards and two TD catches, is also back. Derek Degollado, who started every game as a sophomore in 2018, returns to anchor the offensive line. Other defensive standouts besides Turner are end Kris Sanchez, cornerback Julian Hunt and linebacker Amir Phillips.

Last playoff appearance: 2000, lost to Austin Westlake 42-28 in 5A Division I second round 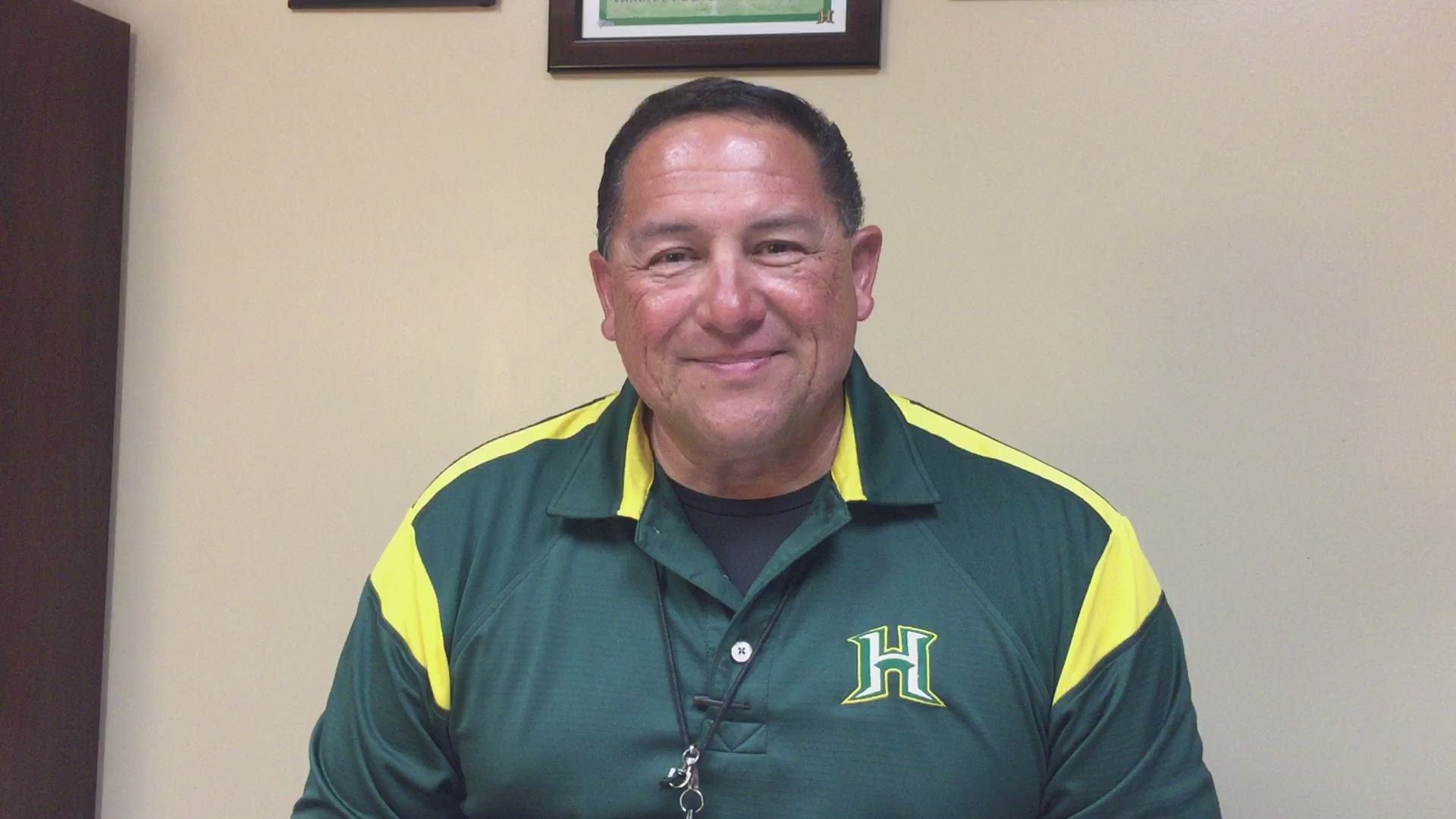 Outlook: Holmes slipped to 1-9 last year after finishing 2-8 in its first season under coach Juan Morales in 2017. While the Huskies could be hard-pressed to move up in the district standings, they could surprise a few opponents this season. Experience will be a strength for the Holmes defense, which returns nine starters. The best of the bunch is lineman Isaiah Robinson, a three-year starter who recorded 54 tackles and five sacks last season. End Ethan Malley and linebacker Dimitri Rodriguez, who had 53 tackles as a junior, are two other dependable hands.With only four starters back on offense, moving the ball consistently could be tough for the Huskies early in the season. Running back Christopher Melero, who rushed for 365 yards and four touchdowns, is one of the better offensive players returning. Rashawn Curtis, who started as a freshman last year, and Josh Davis will anchor the offensive line. Davis was moved from center to guard in the offseason. Another capable offensive performer is tight end Pedro Medelez. A four-time state semifinalist in the 1980s and '90s, Holmes hasn’t had a winning season since going 10-2 in 2000, finishing below .500 in 16 of the past 18 years. The Huskies were 5-5 in 2001 and 2016. 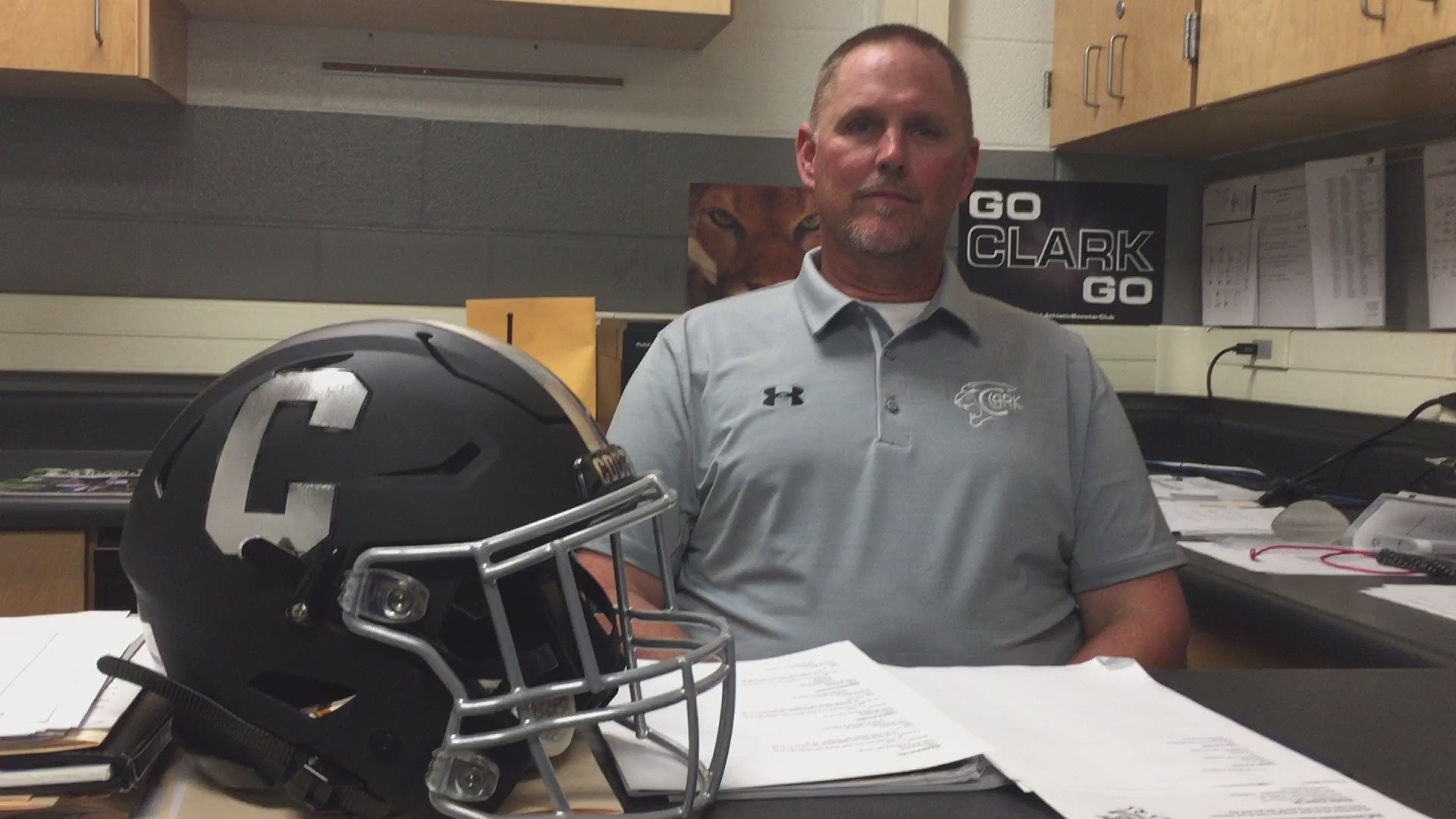 Outlook: J.L. Geist, head coach at Sugar Land Dulles the past three seasons, succeeds Steve McGhee, who headed the Clark program for nine seasons before resigning this winter. Geist went 17-12 at Dulles and led the Vikings to an 8-3 season and playoff berth last year. Geist takes over a Clark program mired in a streak of nine losing seasons. The Cougars are 33-59 since reaching the state semifinals in 2008 and state quarterfinals in 2009 under coach Lloyd Alexander. Clark finished 3-7 overall and 3-6 in district play, tying Stevens for sixth. Geist will look to three offensive and five defensive returning starters to lead the way for his first Clark team. David Santos, who had some playing time as a junior, will start at quarterback. Wide receiver Kai McCarty, who played as a sophomore last year, will be one of Santos' primary targets. Ends Cameryn Bell, Terrance Jankowski and Ted Rodriguez will anchor the defensive line. Rodriguez and Bell had 39 and 31 tackles, respectively, last year. Strong safety Pierce Stratton will lead the secondary.