Veterans Memorial, Brackenridge, Sam Houston and Burbank are expected to battle for three other playoff spots. 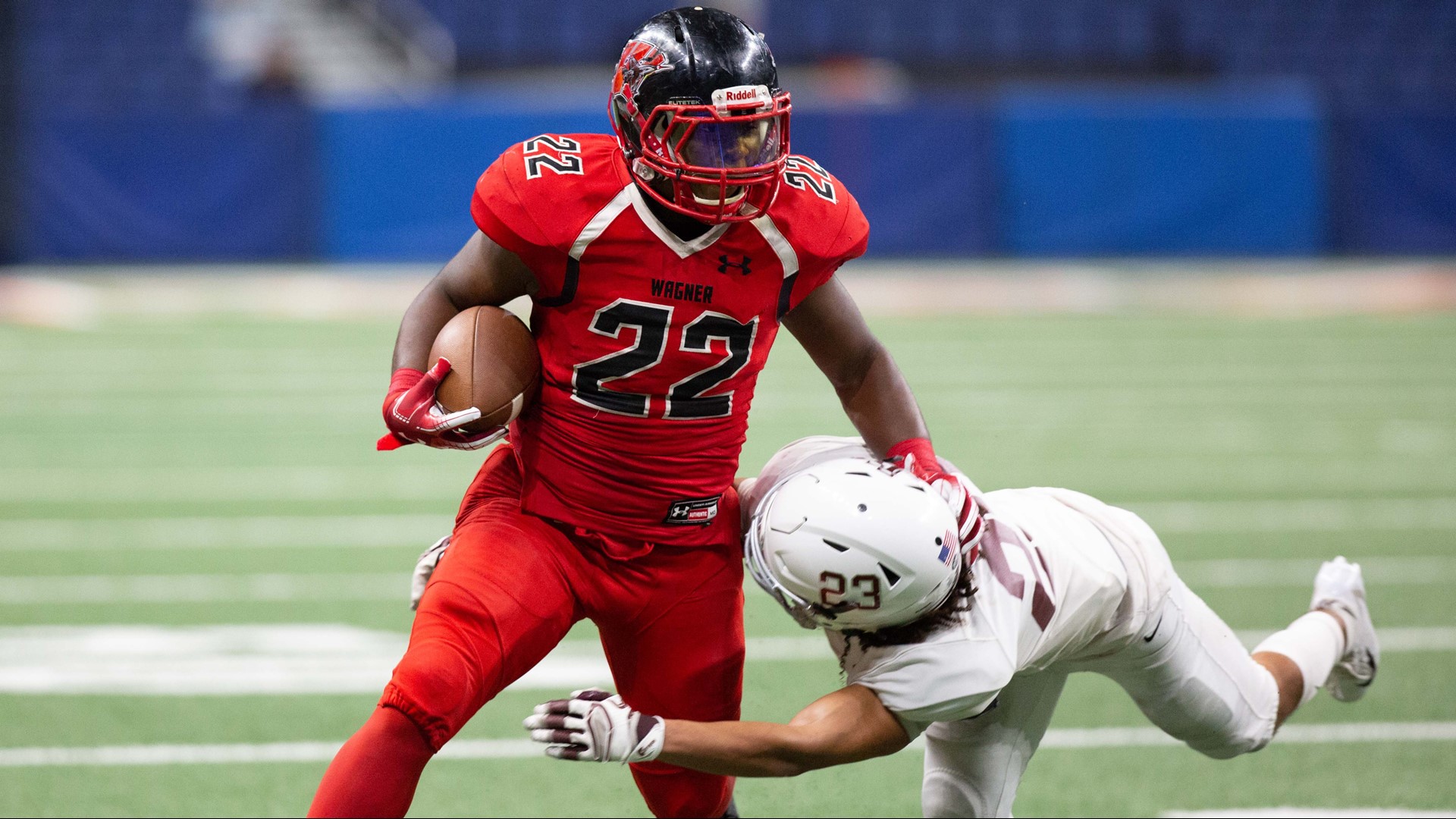 Predicting the District 13-5A / Division I race

2. Veterans Memorial (1,423): Patriots made their first varsity season last year a memorable one.

4. Sam Houston (1,341): Hurricanes have made the playoffs each of the past six seasons.

6. Lanier (1,907): Voks looking to get back on track after two straight losing seasons.

9. Jefferson (1,871): Mustangs will try to break a streak of nine losing seasons.

Here is a breakdown of each team in District 13-5A / Division I: 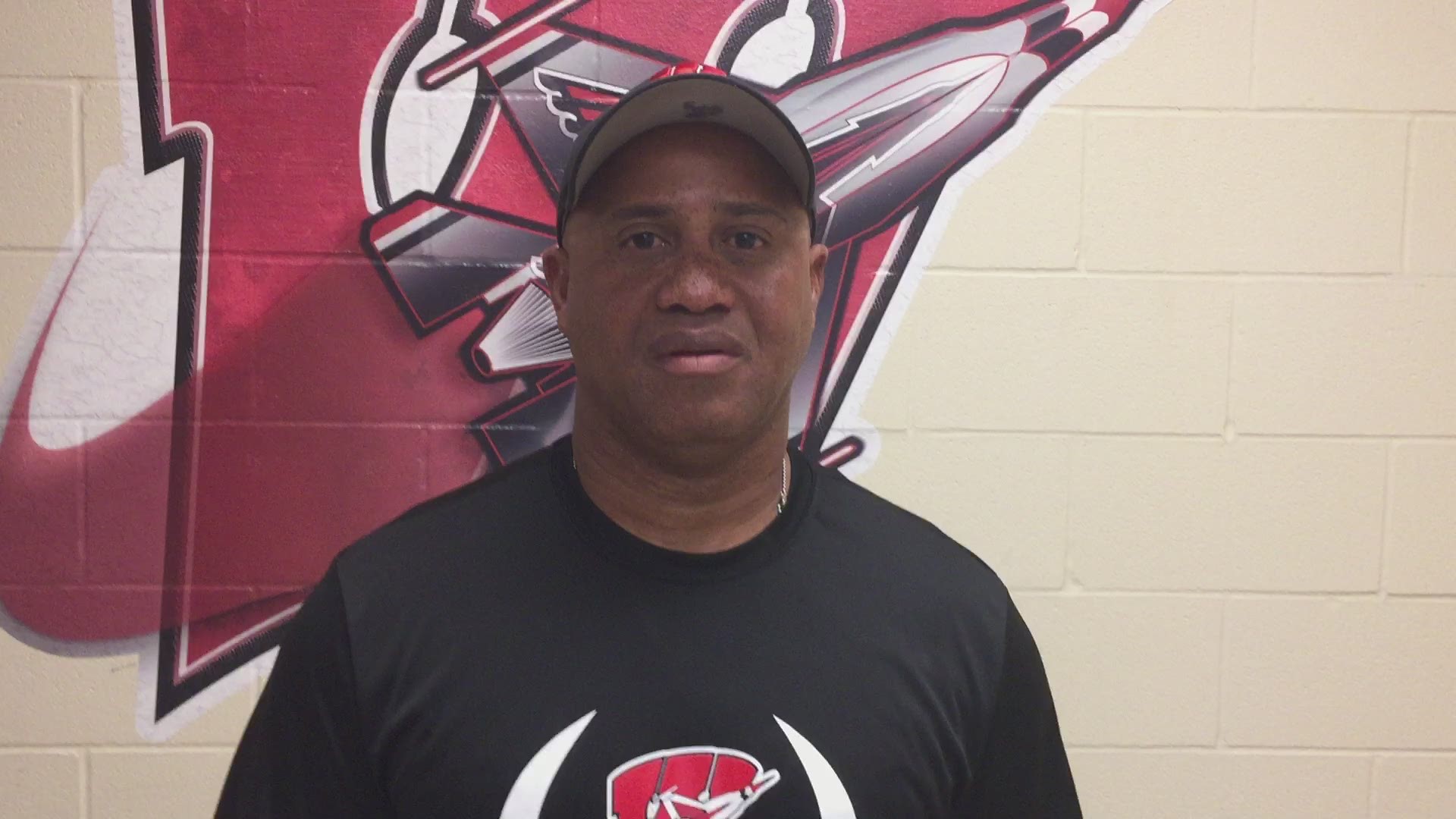 Outlook: Wagner had a historic season last year, winning its first district championship and reaching the state semifinals for the first time. The Thunderbirds lost some outstanding players to graduation, including dynamic quarterback Tobias Weaver, but the cupboard is hardly bare for Charles Bruce, who is starting his seventh season as Wagner head coach. The T-Birds return nine starters from a team that swept its district opponents and finished 13-2. The top two returnees are senior defensive end DeMarcus Hendricks and junior fullback L.J. Butler. Hendricks earned second-team All-State honors last year after finishing the season with 87 tackles, 14 sacks, four interceptions and four touchdowns. Butler carried a big load of the offense, rushing for 2,028 yards and 32 touchdowns. Another big offensive threat back is senior wide receiver Josh Cobbs, who had 14 receptions for 236 yards and four TDs in Wagner's run-oriented offense. The best player on the offensive front is senior Rafael Zertuche, who had five pancakes last year. Hendricks, two-year starting end Cabron Clay and senior cornerback Avante Stevens will anchor the defense. Clay had 59 tackles and eight sacks last season, and Stevens recorded 36 tackles, two sacks, one interception and one TD.

Coach: Richard Mendoza, 8-4 in one season at Veterans Memorial

Last playoff appearance: 2018, lost to Mission Veterans Memorial 48-33 in 5A Division I second round 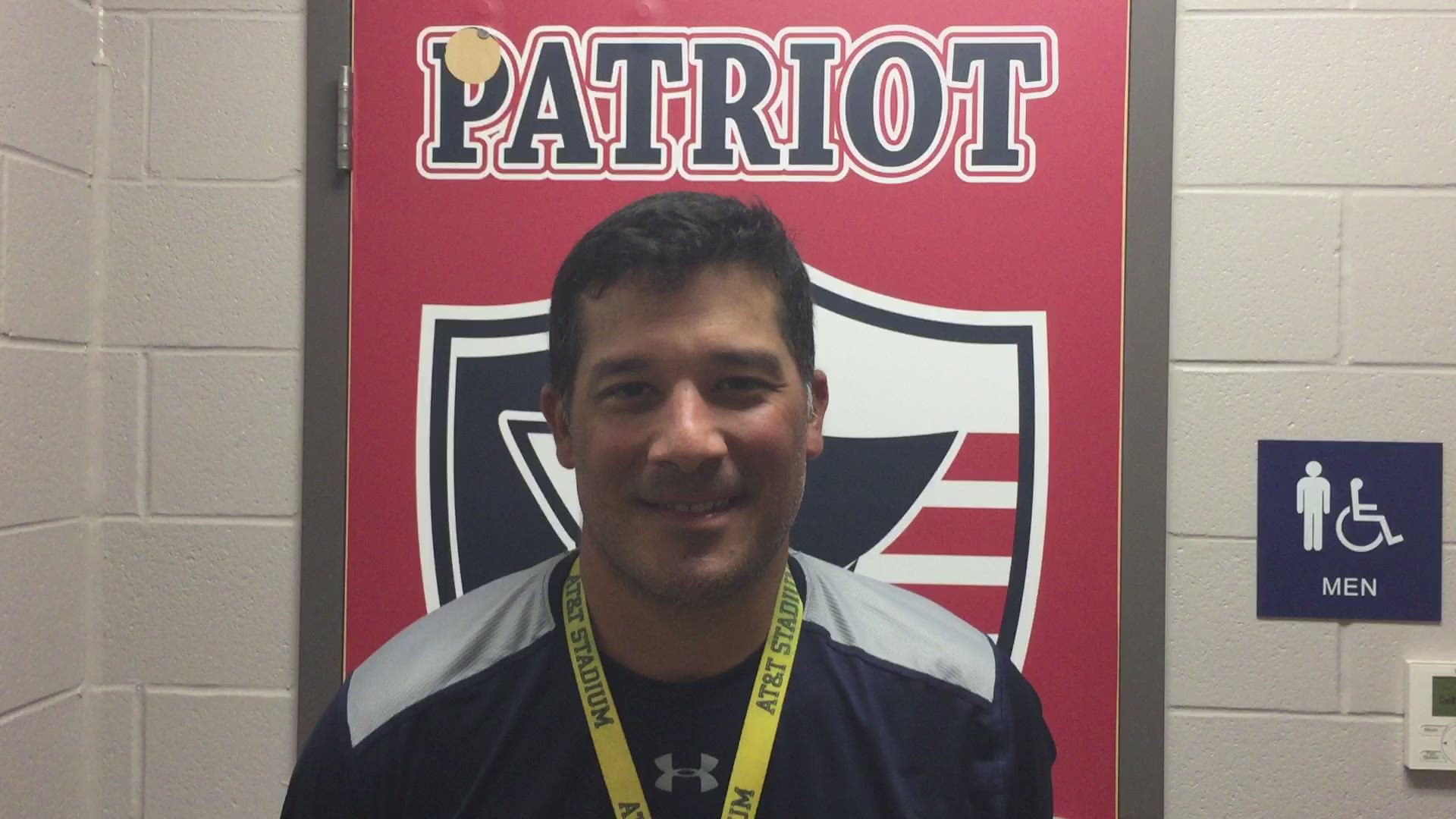 Outlook: Veterans Memorial had a memorable inaugural varsity season last year, reaching the second round of the playoffs after finishing runner-up to state semifinalist Wagner in the district race. The Patriots return seven starters each way from the team that went 8-4 overall and 7-1 in league play. Quarterback Isaac Barrera saw some playing time as a backup last year, passing for 362 yards and running for 450 yards and seven touchdowns. Barrera will throw to senior wide receivers Darius Guess and Balin Jackson. Jackson had 542 yards and four TDs receiving last year, and Guess finished with 402 yards and four TDs. Senior linebacker Jadin Sommers, who had 121 tackles and scored four defensive TDs, will anchor the Veterans D. Jadin Sommers will get plenty of help from strong safety Omari Frazier and end Dresden McIver, both seniors. Frazier had 81 tackles and one interception last season and McIver finished with 93 tackles and one sack. Senior linebacker Ryu Williams and junior cornerback Simeon Woodard are two other reliable defenders. Williams recorded 81 tackles and two sacks last year, and Woodard had 46 stops and three interceptions.

Credit: David Flores / KENS5.com
Senior safety Michael Puente, left, and senior quarterback Julian Cameron will be relied on to provide leadership for a Brackenridge team expected to make the playoffs.

Last playoff appearance: 2018, lost to Southwest 49-27 in 5A Division I bidistrict 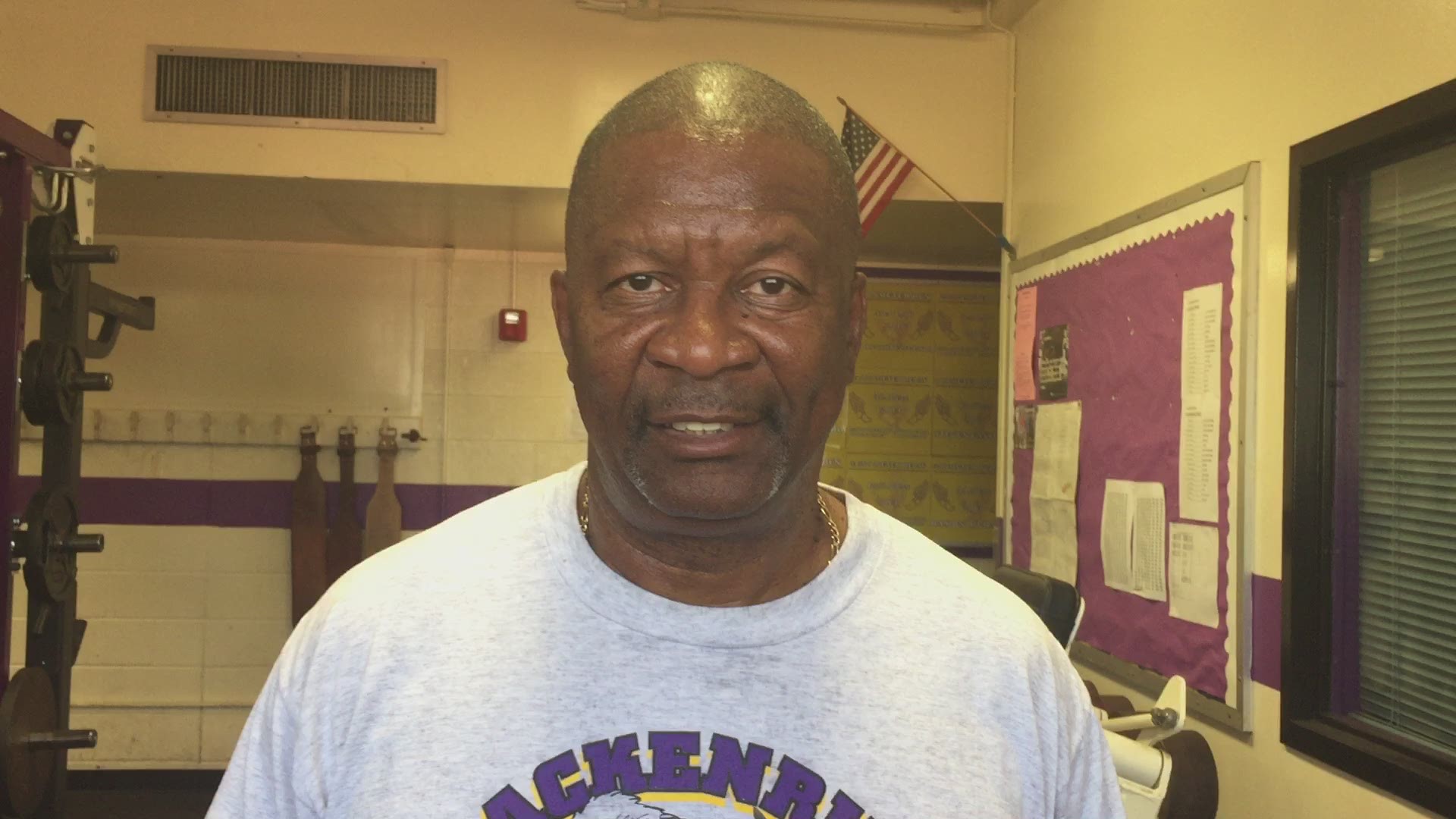 Outlook: Brackenridge returned to the playoffs last year after missing the cut in 2017. Willie Hall, starting his 25th season as the Eagles' head coach, will look to 12 returning starters, seven on offense and five on defense, keep Brack in the title chase. Quarterback Julian Cameron, who passed for 1,534 yards and 22 touchdowns, is back to lead the offense. Cameron also rushed for 300 yards and nine more TDs. Wide receiver Carlos Camargo and tight end Jade Rios, Cameron's primary targets last year, also return. Rios had 26 receptions for 378 yards and five TDs last year. Running back Martin Levingston had a solid season as a sophomore last season, rushing for 643 yards and six TDs. Justin Cabrera also saw playing time at running back in 2018. The key player on the offensive line is Diego Cornejo. Rios also will play linebacker and Cabrera is expected to play both ways, too, joining Michael Puente and Alan Pruneda in the secondary. The Eagles made the playoffs for eight consecutive seasons before staying at home in 2015. They returned to the postseason the following year before missing out again in 2017. Hall, 136-120 in 24 seasons at Brack, is the longest-tenured head football coach at one school in the San Antonio ISD. 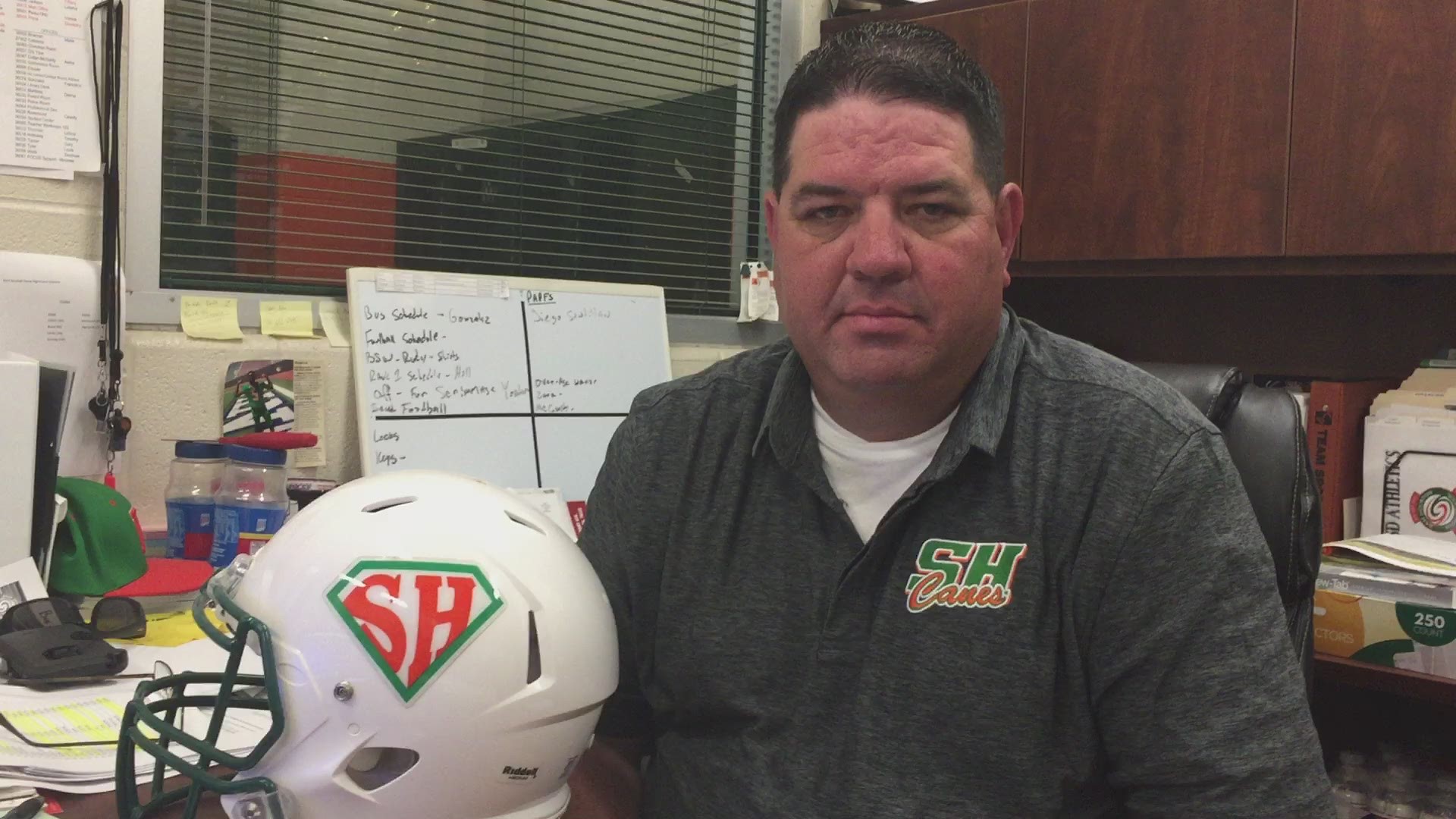 Outlook: Sam Houston has made the playoffs nine of the past 10 seasons, including the last six in a row. The Hurricanes return only four offensive starters from last year's 5-6 squad, but senior quarterback Raymond Citizen and junior running back Faiszon Reese are two capable players with experience. The defense, which returns five starters, could be a strength for the Hurricanes this season. Senior end Ivan Reed, who had 72 tackles and three sacks last season, and junior nose guard Romeo Losoya will anchor the defensive front. Senior Magnus Kirby and senior free safety Latrevious Reed are the leaders in the secondary. Kirby finished last season with 77 tackles, one sack and two interceptions, and Reed had 55 tackles and five interceptions. Sam Houston is starting its fourth season under coach Melton Schultz, who is 17-16 since getting promoted in 2016. The Hurricanes went 6-5 in each of Schultz's first two seasons.

Coach: Phil Barron, 6-4 in one season at Burbank

Last playoff appearance: 2017, lost to Richmond Foster 69-6 in 5A Division I bidistrict 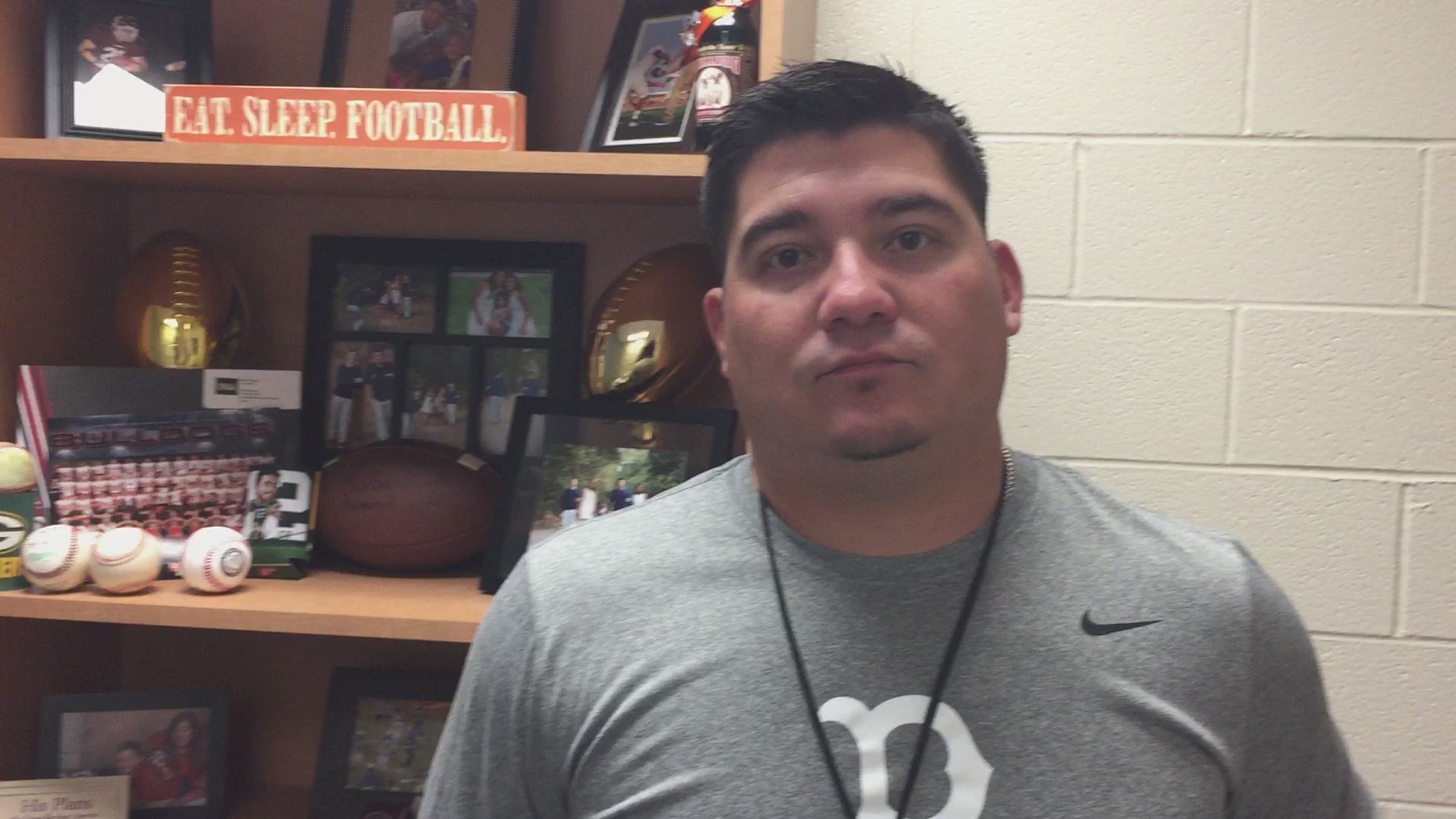 Outlook: Phil Barron led Burbank to its first winning season since 2008 in his inaugural campaign as the Bulldogs' head coach last year. Burbank's 6-4 finish stopped a streak of nine losing seasons. The Bulldogs went 17-74, including 0-10 in 2012 and 2015, during that stretch. They missed the playoffs last year after advancing in 2017, when they finished 5-6 after getting trounced by Richmond Foster in the first round. Barron, who was Burbank's offensive coordinator for one season before getting promoted when Mark Perez resigned, will rely on 14 returning starters to keep the Bulldogs in the playoff hunt. The offense will revolve around running back Matthew Salazar, who rushed for 1,300 yards and 18 touchdowns as a sophomore last season. Salazar will run behind an offensive line led by juniors Isaiah Gonzalez and Xavier Morris. Senior Toby Korrodi will start at quarterback after passing for 300 yards and four TDs as a backup last year. Korrodi is the son of former Harlandale standout quarterback Toby Korrodi. The elder Korrodi's other son, Jacob, a junior, will play in the Burbank secondary. Senior safety Jose Flores and tackles Joe Klein and Guillermo Ortiz, both seniors, will lead the defense. Flores had 53 tackles and four interceptions last year, and Klein recorded 40 tackles and five sacks. Ortiz finished the season with 30 tackles and five sacks.

Last playoff appearance: 2016, lost to Angleton 73-0 in 5A Division I bidistrict 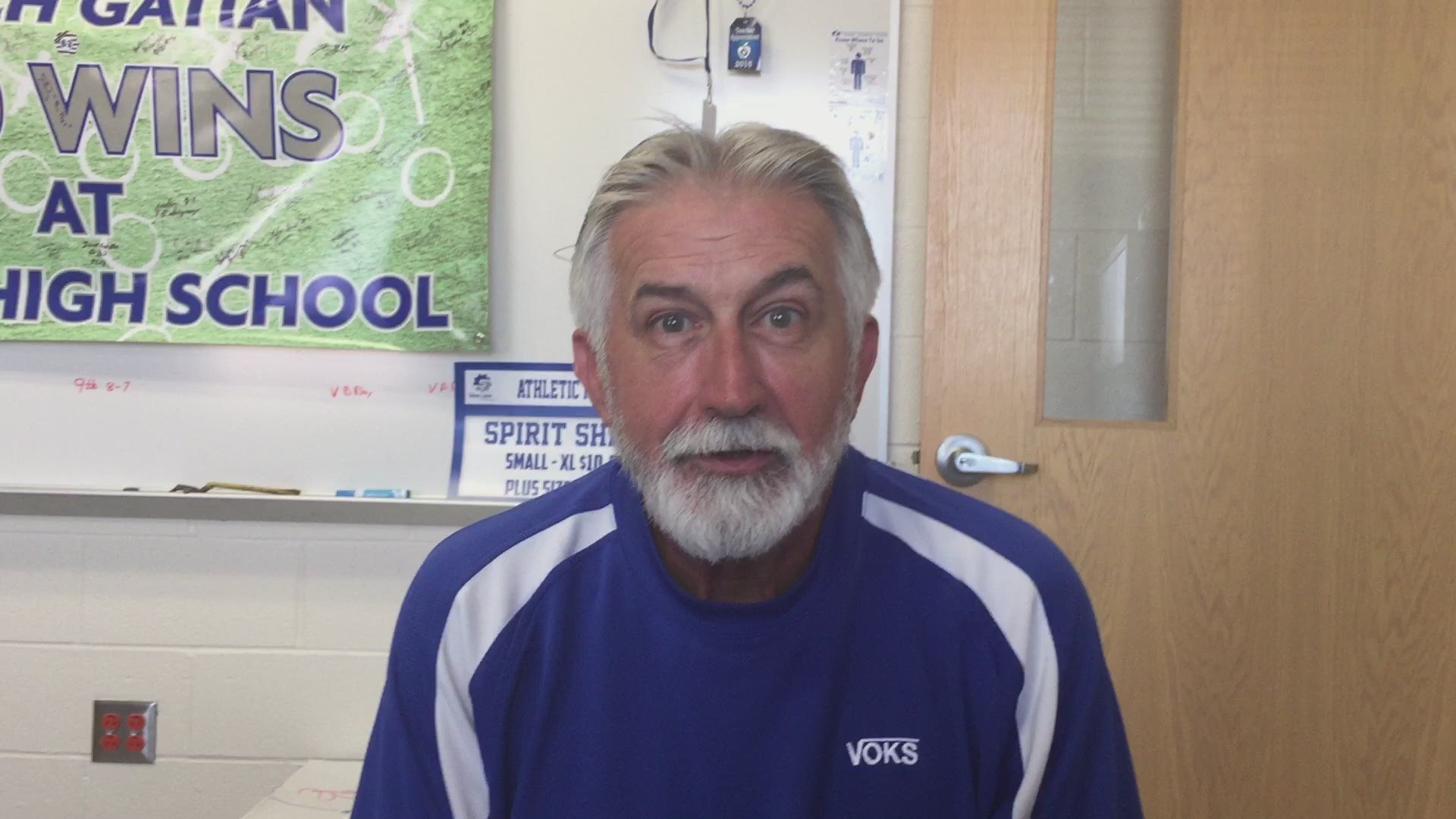 Outlook: Lanier has won a total of three games the past two seasons after making the playoffs in 2016 and finishing 7-4. But with seven starters back each way, the Voks are feeling good about their chances of moving up in the district standings in 2019. Junior Fabian Maciel and senior Rocco Medina are expected to rotate at quarterback again this season. Brothers Jay and Jacob Reyes will anchor the offensive line. The defense will be led by two-year starting ends Latrell Taylor and Cesar Flores, who finished with seven and two sacks, respectively, as juniors. Lanier is starting its 22nd season under coach Don Gatian, who has one of the longest tenures at one school in the San Antonio ISD. The Voks have made the playoffs 10 times under Gatian, who led Lanier to the postseason for the first time since 1940 in his first season (1998). The Voks have won two district championships and shared another crown with Gatian at the helm.

Last playoff appearance: 2017, lost to Angleton 79-14 in 5A Division I bidistrict 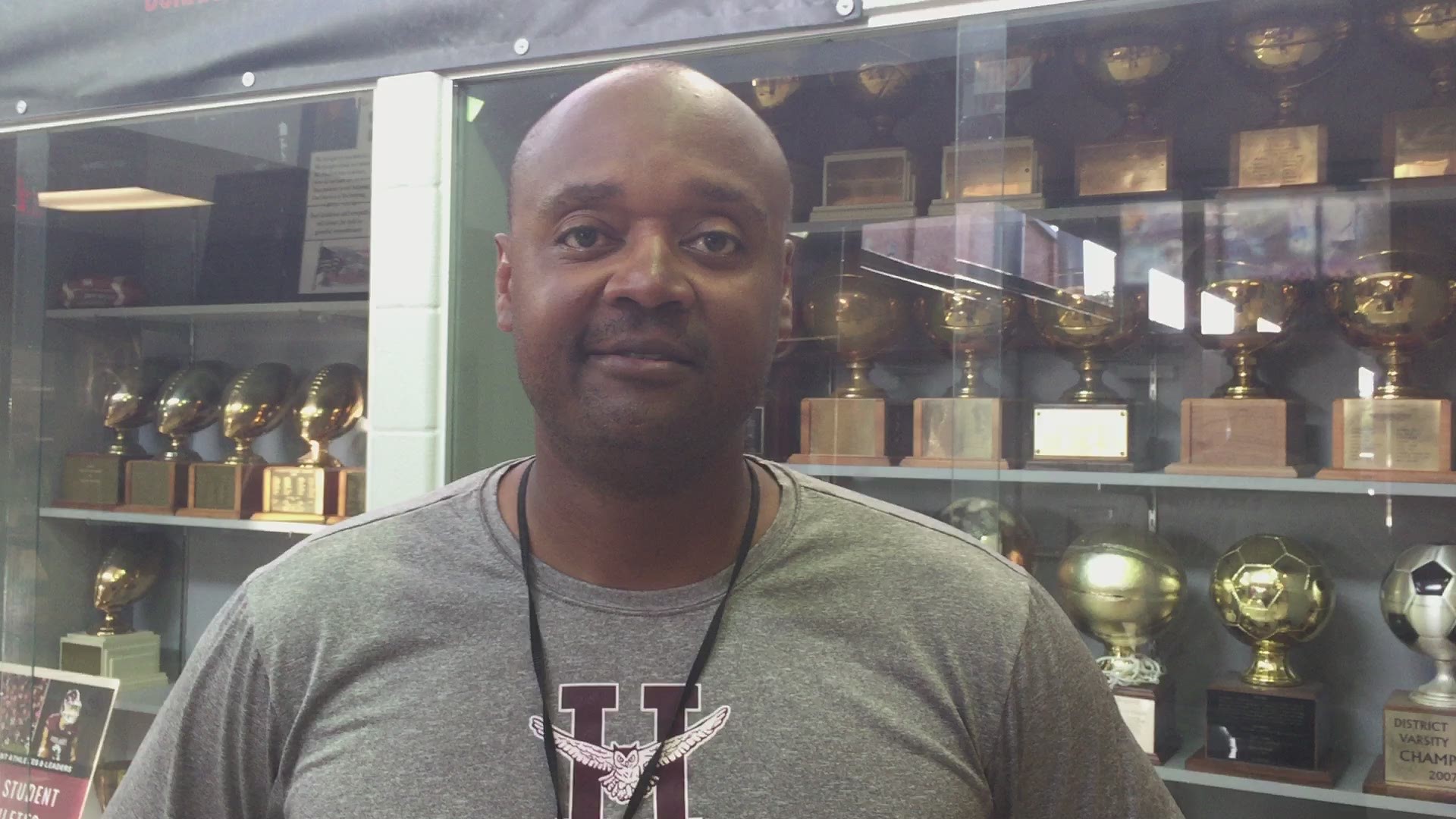 Outlook: Highlands slipped to 2-8 last year after making the playoffs and finishing 7-4 in coach Hank Willis' first season. Inexperience hurt the Owls last year, but with seven starters back each way, they should be an improved team this season. Speedy senior quarterbacks Nigel Cervantes and Juan Luna, both dual threats, are among the players Willis will rely on to get Highlands back on track. Running back D'Marrion Gonzales, who had a solid freshman season on the varsity, will help take pressure off Cervantes and Luna. Junior Max Alvarado is the leader on the offensive line. Seniors John Stevenson and Isaiah Williams are two experienced and skilled players in the secondary. Highlands went 15 straight seasons before advancing to the playoffs in 2015, 2016 and 2017, finishing 7-4 each year. The 2015 and 2016 teams were coached by Juan Morales, who resigned in 2017 to become head coach at Holmes. Highlands won a share of the district championship in 2016. The Owls haven't won a title since 1999, when they went 10-1 in coach Ken Gray's final season at Highlands.

Credit: David Flores / KENS5.com
Edison linebacker Angel Carvajal and offensive tackle Abraham Salazar are among the leaders on a Golden Bears team that should be better this season. 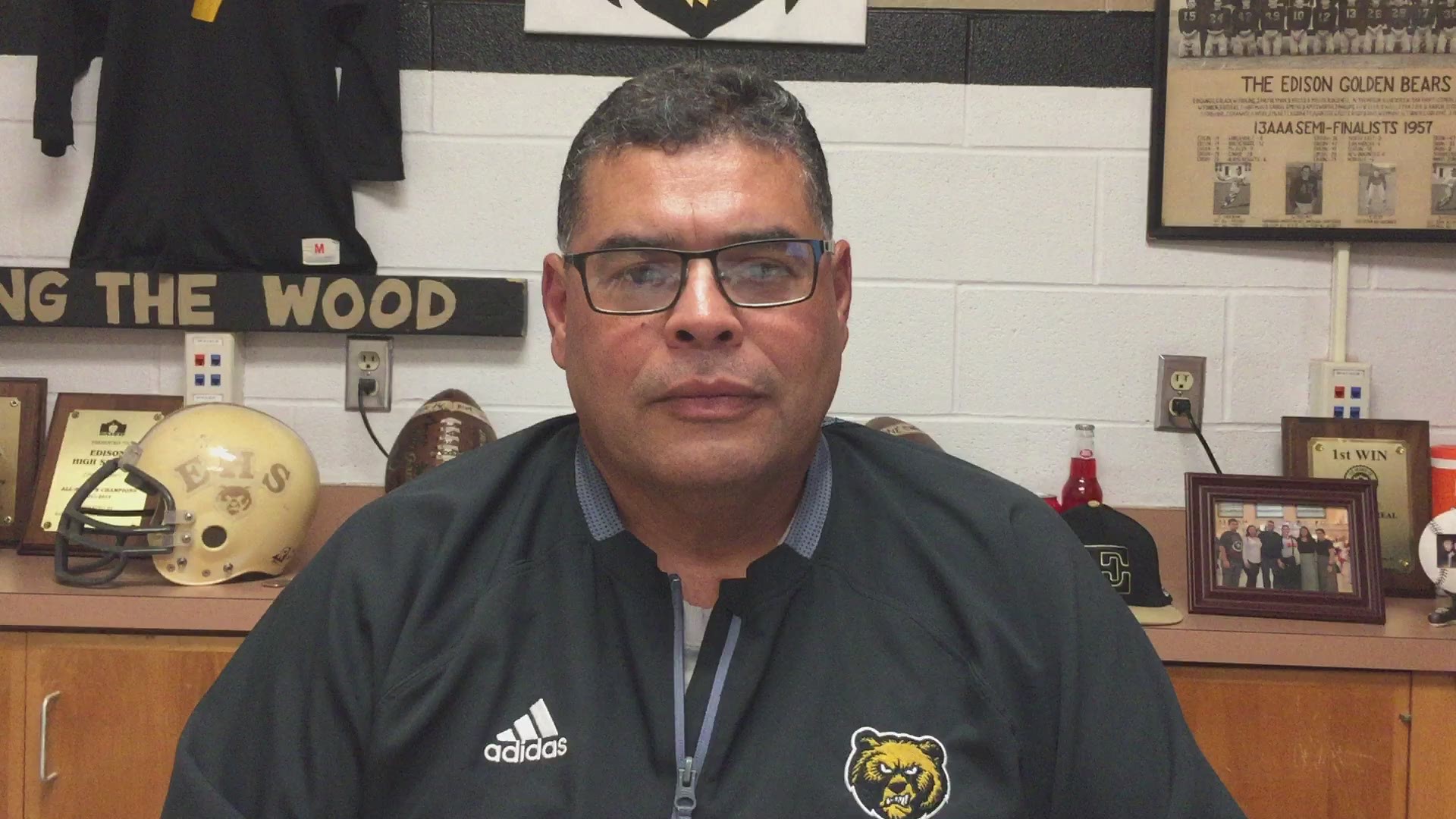 Outlook: The Golden Bears finished 3-7 last year and have finished with losing records each of the past two seasons. But a good offseason and summer have Edison feeling optimistic about 2019. The Bears went 7-3 in 2016, but did not advance to the postseason. Edison hasn't made the playoffs since 2014 (5-6) and hasn't won a district title since 2010 (8-3). Offensive lineman Rodolfo Barboza, Jose Cortez and Abraham Salazar headline the list of Edison's 11 returning starters. The big boys up front will block for senior quarterback Chris Vasquez and junior running backs Luke Converse and Onyx Ortiz. The ringleaders on defense are junior lineman Michael Bryan and linebacker Angel Carvajal. The Golden Bears are starting their third season under coach Jesse Monreal, who was Edison's defensive coordinator for five seasons before getting promoted when Albert Torres resigned to become head coach at Harlandale.

District 13-5A / Division I opener: vs. Brackenridge, Sept. 13, Alamo Stadium 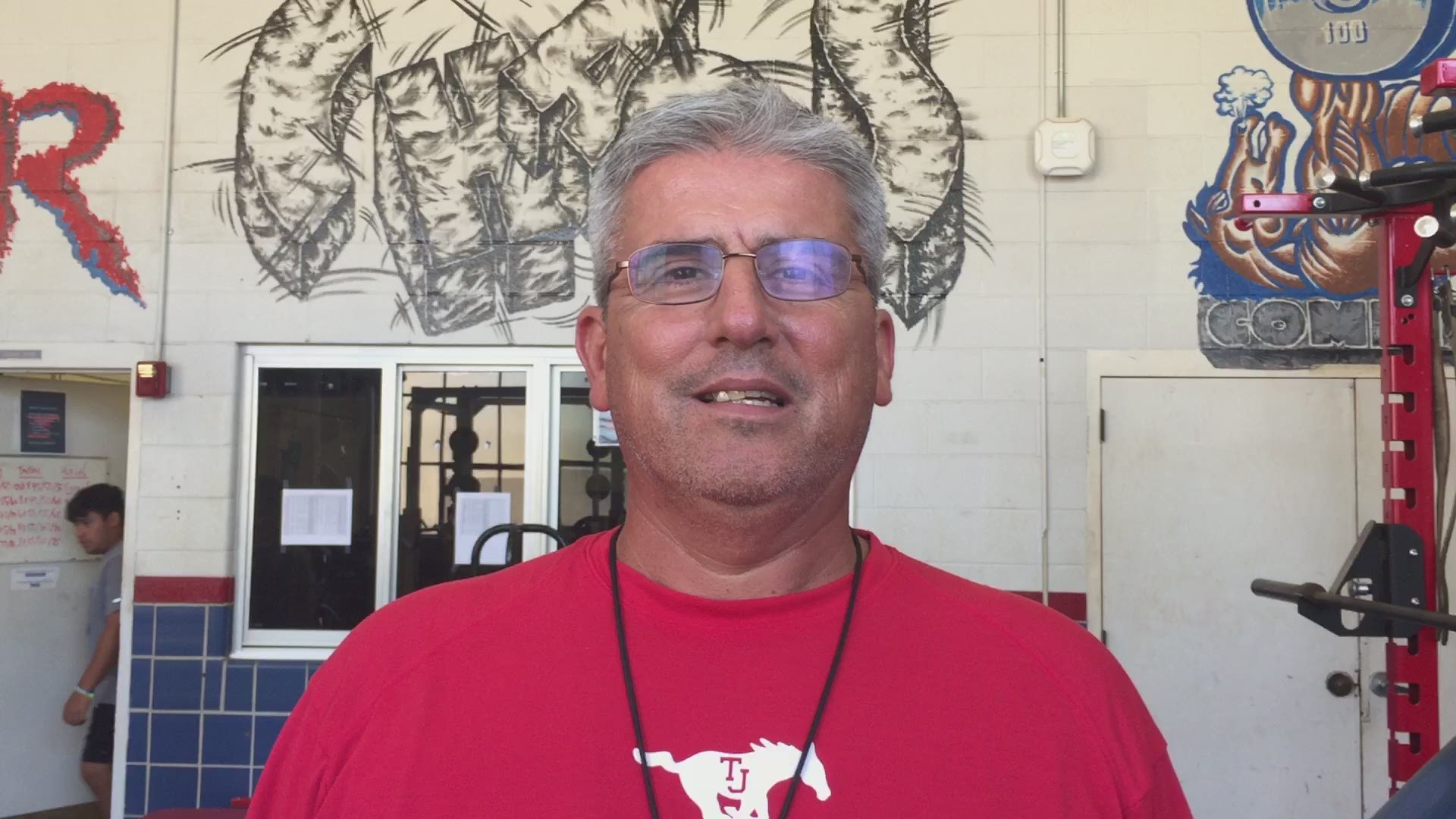 Outlook: Jefferson coach Edward Cardenas will rely on a defense that returns six starters to carry the Mustangs while their inexperienced offense finds its groove. With senior defensive back Isaac Gonzalez and junior safety Itler Mbula returning, the Jeff secondary will be a strength. Mbula had 70 tackles and two interceptions last season, and Gonzalez recorded 63 stops. Senior tackle Justin Amesquita and end Dylan Banda are the standouts on the defensive line and Abraham Guadiano leads the linebacker corps. The offense returns only four starters, so there's some rebuilding to do on that side of the ball. Gonzalez, who will play both ways, and junior Ryan Villarreal will line up at running back. Senior Manuel Perez will anchor the offensive line. The Mustangs fell short of the playoffs for the sixth year in a row last season. Jeff advanced to the postseason for five consecutive years before starting its slide in 2013, and hasn't finished with a winning record since going 6-5 in 2009.