The Silver and Black obtained DeMarre Carroll, a 10-year NBA veteran, in a trade with Brooklyn in July. 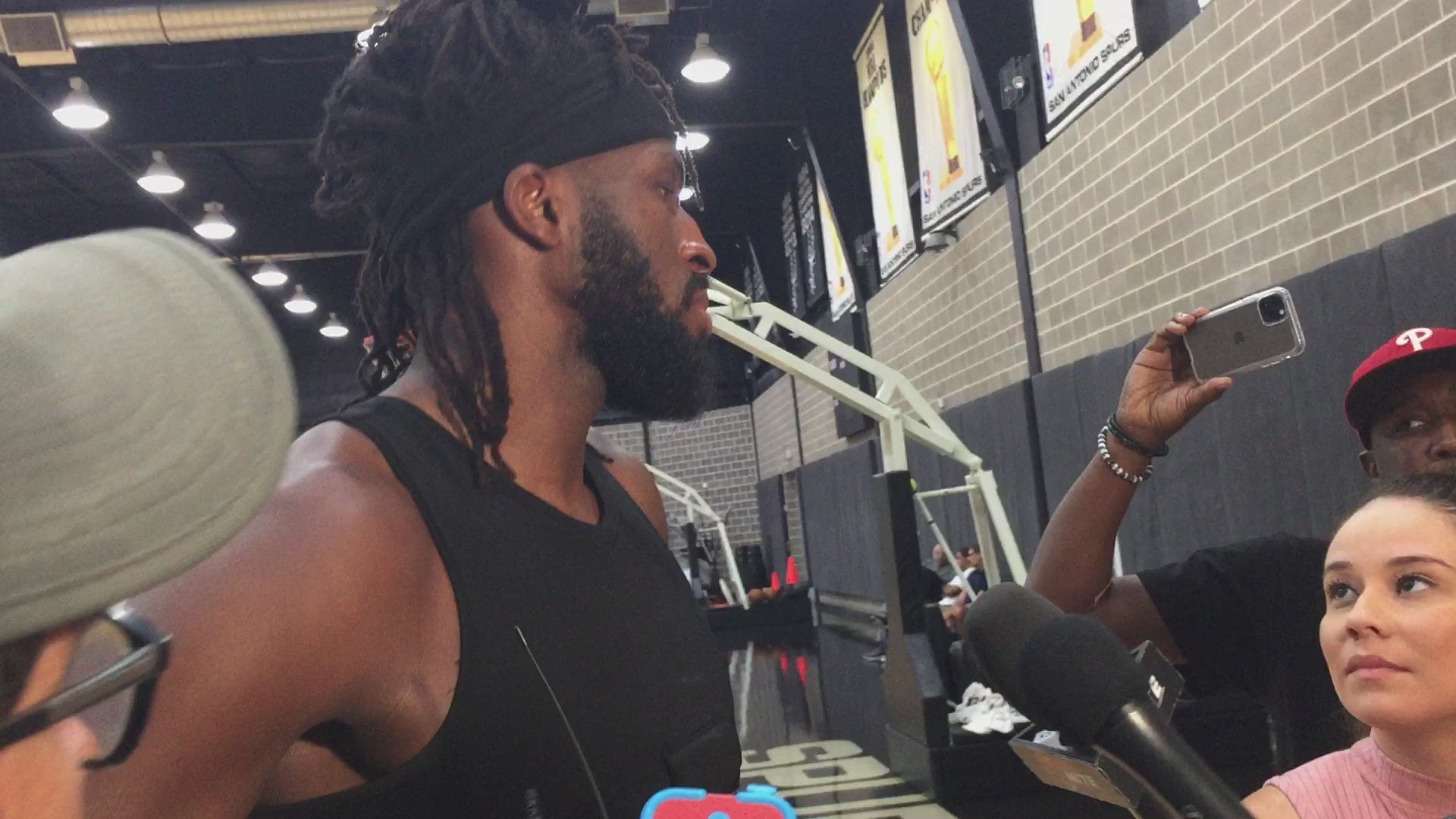 SAN ANTONIO – One of the most important things about starting a new job is understanding what management expects.

Three months after getting traded to the Spurs by the Brooklyn Nets, forward DeMarre Carroll knows exactly what coach Gregg Popovich expects of him: defense.

"That's been my forte since I've been in the league," Carroll said Wednesday after practice."You know he's going to rely heavy on me to go out there and try to perform, or even be a veteran leader and get some of the guys to perform.

"At the end of the day, I know that's the role I'm going to have to play. I've just got to be ready for it."

Carroll met with the local media for the first time since the Spurs' four-day training camp started Tuesday. The Silver and Black play the Orlando Magic in their preseason opener Friday night at the AT&T Center.

Carroll, 6-foot-8 and 215 pounds, averaged 11.1 points, 5.2 rebounds and 25.4 minutes in 67 games last season. He played two seasons with Brooklyn before going to San Antonio in a three-team trade that included Spur Davis Bertans, who went to Washington.

Selected by Memphis with the 27th pick in the first round of the 2009 NBA draft, Carroll played with the Grizzlies until getting traded to Houston in February 2011. One of Carroll's teammates in Memphis was Rudy Gay, who is starting his third season with the Spurs.

Carroll also has played for the Denver Nuggets, Utah Jazz, Atlanta Hawks and Toronto Raptors. He and Spurs guard DeMar DeRozan played together in Toronto for two seasons (2015-16, 2016-17). Toronto traded Carroll to Brooklyn in July 2017.

As always, defense remains priority No. 1 for the Spurs. They struggled with inconsistency on that end of the court last season and the defensive lapses cost them.

"I think that's the main focus this year – defense," Carroll said. "We've got a lot of guys coming back or they brought in that are defensive minded. I think we can have a little punch to that, and try to really focus more on defense."

Known for his grit and toughness as a defender, Carroll will be counted on to help shore up a facet of the Spurs' game that was the league's gold standard during the peak of the franchise's success.

So what does it take to be a good defensive team?

"I think it's talking and the will," Carroll said. "There's a lot of offensive players in the league now. They're going to score the ball. It's the end of the game, the nitty-gritty time, when you can get stops. Hopefully, we can be that team that's got that grit."

Carroll describes himself as a player who can hit the three-pointer and play hard-nosed defense.

"I'm going to try to come in and do what I do," Carroll said. "That's what I do. shoot, 3-D. Shoot threes and try to play defense. Stick to my role. However I can help these guys, that's what I'm going to do."

Carroll was asked if he knows what the "Spurs Way" means.

"Every team around the league kind of models their organization, some way, off the Spurs," Carroll said. "At the end of the way, high expectations, high-character guys, discipline and coming down and playing hard.

"If you step in here and you don't do those things, you stick out like a sore thumb. As soon as you step in the door, Coach Pop let you know that you need to do the right thing."

Carroll said his best two seasons as a pro were in Atlanta when he played for coach Mike Budenholzer, who was a longtime assistant to Popovich before landing his first head-coaching job.

Carroll, 33, said he knows there are people who think his defense has slipped as he's gotten older. He didn't hesitate when he was asked if he has a chip on his shoulder.

"Yeah," he said. "I had a lot of injuries when I was in Toronto. When I left Atlanta, I got injured. I think my best years were in Atlanta just because of the overall defense and having (coach) Mike Budenholzer. It wasn't just me guarding guys.

"When you have a whole team behind you, you can be a little aggressive. You can be into the passing lanes. I think coach Miike Budenholzer took a lot of his philosophy from Pop, so hopefully I can get back to that this year."

Carroll played two seasons in Atlanta (2013-15) for Budenholzer, who was an assistant to Popovich for 17 years before leaving the Spurs to take his first NBA head-coaching job with the Hawks in 2013.

Carroll said he wants to be more active on defense this season.

"Be more aggressive," he said. "Be more aggressive on the ball, play the passing lanes, be able to gamble a little bit more. At the end of the day, you've just to be who you are. I haven't been in the league 11 years for nothing. I'm just going to keep trying to continue my journey."

RELATED: Spurs go back to the basics on first day of training camp