The Thunderbirds were scheduled to play in the 5A state semifinals on March 12, before the UIL state tournament was suspended and eventually canceled. 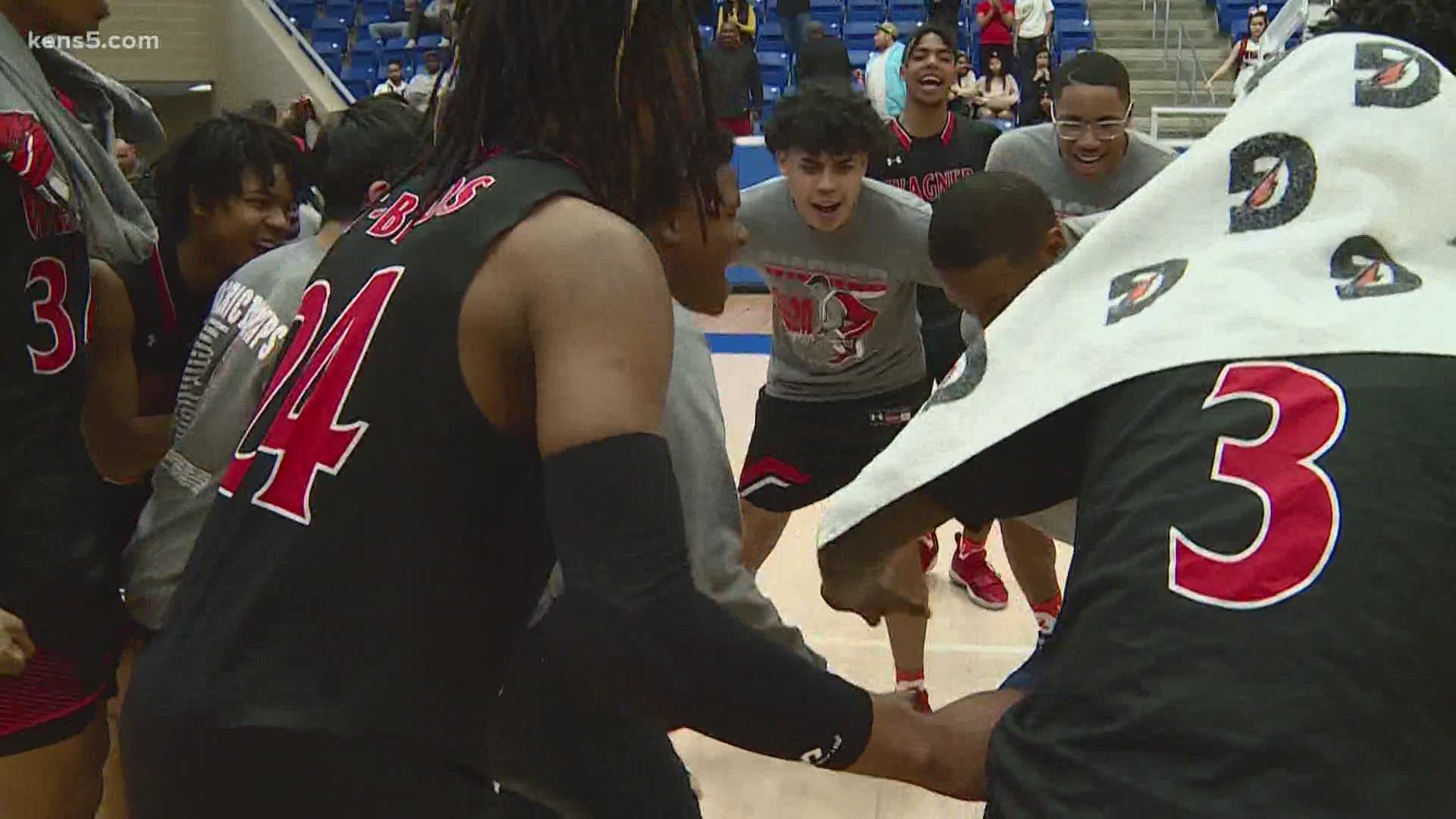 SAN ANTONIO — Editor's note: The above video was originally published on March 12, 2020

With Wagner returning four starters from last year's Class 5A boys basketball state finalist, this was the season the Thunderbirds were expected to finally win it all.

In the state tournament for the third time in four years, Wagner was raring to play defending state champion Mansfield Timberview in the semifinals on March 12 at the Alamodome.

"We had a shootaround at the Alamodome on the day before and everybody was happy, intense," senior wing Journee Phillips, one of four senior starters for the Thunderbirds, said Wednesday. "We were shooting threes and hitting them. We were all hyped, ready to go."

Timberview beat the Thunderbirds 77-64 in the title game last year, but Wagner was brimming with confidence heading into the rematch seven weeks ago Thursday. The Thunderbirds (35-5) had won 17 straight and the Wolves (29-8) had the worst record among the four 5A semfinalists.

"As a coaching staff and as a team, the whole program, we figured that we had a really good shot this year to win it," Wagner coach Rodney Clark said Wednesday. "Who knows what would happened? You know, because things go crazy sometimes. We had a great feelings about it."

But just as the Thunderbirds were getting ready to leave their locker room at school and walk outside for a sendoff rally around noon, Clark got a phone call that effectively ended Wagner's season.

With the specter of the coronavirus sweeping across the country like wildfire, the University Interscholastic League had suspended the state tournament after only four games on the first day of the three-day event.

"It was sad, surreal," Clark recalled.

UIL officials talked about resuming the state tournament later in the spring, but those hopes ended when Texas Gov. Gregg Abbott announced that all state schools would remain closed for the rest of the school year.

"The more time that passed, the more we felt we wouldn't play again," said Phillips, who has signed with Texas A&M International in Laredo. "It was big, but there's a blessing in disguise with all that's happening. We know why we couldn't play. It wasn't safe.

"All is not lost. I just wish we could have gotten that time back, so I could experience the rest of my senior year, not just basketball. I'm going to miss all those senior events at the end of the school year."

Joshua Cobbs, a senior post, was one of the Thunderbirds' top reserves.

"We wish we could have played that game against Timberview, but we still had a heck of a season," said Cobbs, who has signed a letter of intent to play football at Wyoming. "I have a lot of good memories, but I'm ready to look ahead to college."

Phillips was joined in the starting lineup by senior post Demarcus Hendricks, junior guard JaSean Jackson, senior guard Isaiah Kennedy and senior wing Braelon Seals. All started last year except Seals, who was on the Wagner varsity as a freshman and sophomore before moving to Atlanta in 2018.

Clark had put his team through a spirited workout on the morning of March 12, and planned to take the players to their pregame meal after the sendoff from fans before everything changed.

"It's frustrating and sad, not necessarily for me, but for those kids," Clark said. "I had 12 seniors on the team and they didn't get to finish their senior season. I'll get another chance, a shot at it, if I have a good enough team one year to do it again.

"The seniors aren't ever going to get that chance again to be a high school state champion. One good thing about the team that I had this year is that all those guys, with the exception of one or two of them, went to the state tournament last year. So they got the experience of being in that environment."

Clark was an assistant coach under Clifton Ellis, who guided the Thunderbirds to their first two state tournaments, for seven seasons before succeeding him in 2012.

"They were just a bunch of hard-nosed kids," Clark said, when asked what he will remember about this season's team. "A bunch of kids that played hard to accomplish things nobody thought they might be able to do.

"We didn't have all the highly touted recruits in the state, or San Antonio. They were just a bunch of kids that played to win basketball games. It was a fun group of kids. It was run to see them grow."

This group might not have been highly touted, but they were still extremely talented. Ten of the 12 seniors from this Wagner team will play collegiate athletics across the country. They might not have earned a chance to win that championship in 2020, but they will still be remembered as one of the best classes to ever come through the school.