Gregg Popovich, who started his 23rd training camp with the Silver and Black on Tuesday, thanked reporter for his query. 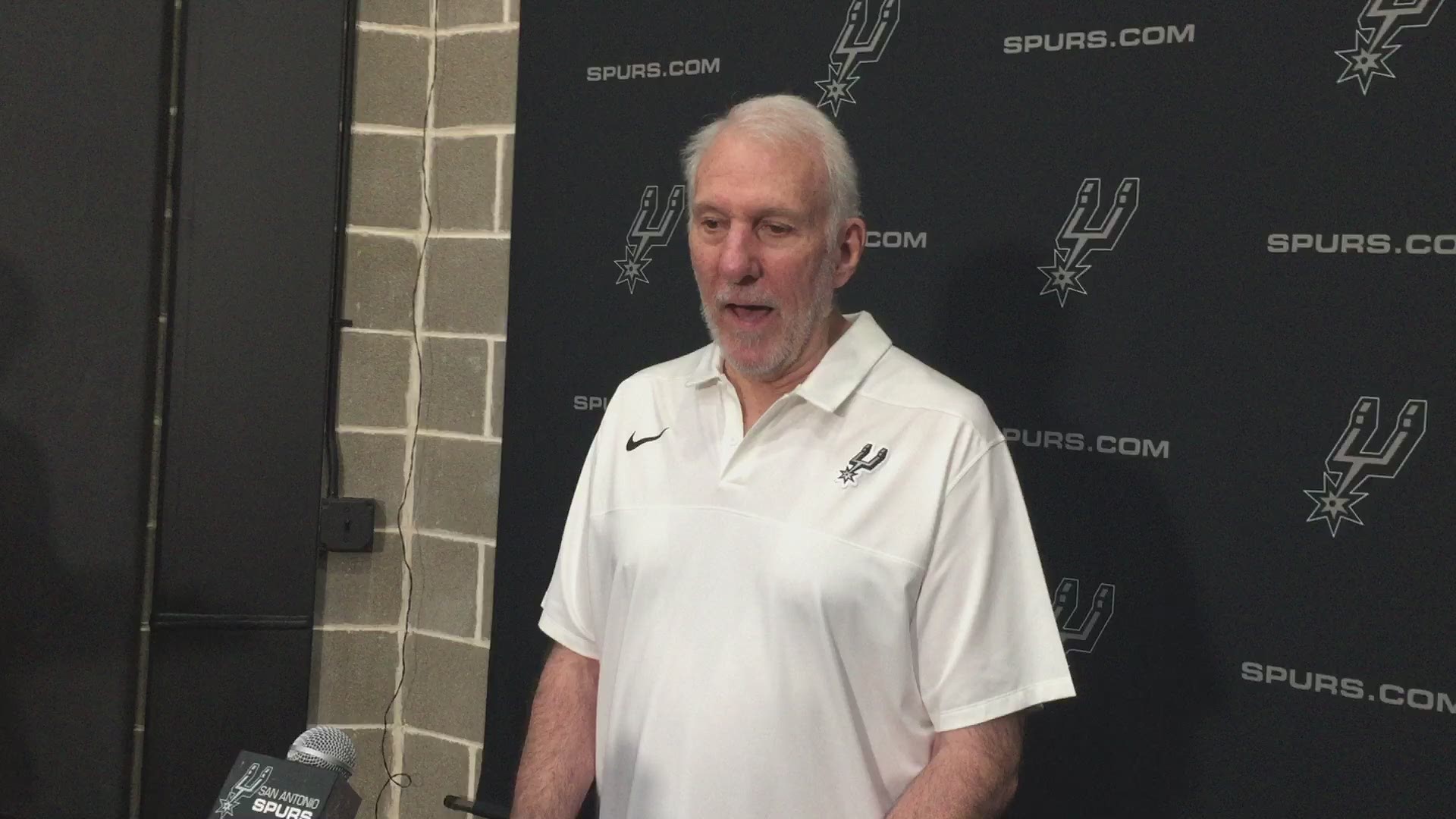 SAN ANTONIO — It was a poignant moment during the humdrum of another Spurs media day on Monday.

Popovich, who has a well-earned reputation for dismissing "dumb questions" from the media, appeared genuinely moved by the query.

"That's very kind of you to ask that question," Popovich said. "I'm good, I'm good. Everybody's life has some ups and downs, hurdles, whatever you want to call it, whether it's at home or in the workplace.

"That's the measure of who you are, I think. You've got to look at the big picture and understand that you're really not all that. You're just a simple guy or gal."

Popovich's wife, Erin, died at age 67 after a long illness on April 18, 2018. Her death came on the day before Game 3 of the Spurs' first-round playoff series against the Golden State Warriors.

Popovich missed the last three games of the series and didn't comment publicly on his wife's passing until he spoke at the Spurs' Media Day last year.

Credit: Photo by Antonio Morano bit.ly/XR79FT / Special to KENS5.com
Spurs guard Bryn Forbes listens to instructions from coach Gregg Popovich in a game against the Philadelphia 76ers last December at the AT&T Center.

While not speaking about his late wife Monday, he talked about moving forward and persevering in the face of adversity.

"You carry on and try to do the best you can for yourself, for your family, for other people, for your friends," Popovich said. "I think each of us tries to do to the best of our ability, so that's where I'm at.

"I've got a great support group. When I really get down to think about it, I always talk to my players about this loss or that loss, and if it's the worst thing that happens to you, you've got a pretty easy life."

Popovich, who starts his 23rd training camp with the Spurs on Tuesday, always has talked to his players, and even the media, about keeping basketball in perspective.

"This is nothing compared to what each of us might have to deal with in our personal lives, and having friends and family helps us all get through all those situations," Popovich said Monday. "I've been fortunate to have that, so I've got no complaints, no excuses. Just move on."

Popovich, 70, is preparing for his 24th season as the Spurs' head coach. He has guided the franchise to all five of its NBA championships and a league-tying 22 consecutive playoff seasons since succeeding Bob Hill early in the 1996-97 season.

Popovich, who has a 1,245-575 record, ranks third in NBA history in career victories and first among active coaches. He also has the most wins with a single franchise in NBA history.

A year ago, Popovich spoke about the importance of perspective at media day.

“It became a whole lot truer, I guess, but I’ve said it for a lot of years and I’ve always meant it,” Popovich said then. “This is a game we play and it’s how we earn our livings, but it’s way down the priority list when you think about the short time we have on the planet.”

Before he spoke one word about basketball on that day, Popovich expressed his thanks for the outpouring of support he and his family received from people throughout the country after his wife’s death.

“This has been my first opportunity to thank a lot of people for their support and kindness over the last six months,” he said. “The NBA and its staff was fantastic in reaching out and helping myself and family work through a difficult situation. Coaches and the players in the league that reached out in so many different ways, whether it was emails, or phone, or notes.

“It’s indescribable to think about how that helped us through. The fans across the country that we don’t even know that wrote. Of course, the San Antonio people who were unbelievable, sending notes and making their support known, was very, very much appreciated. It was a huge help. I want to thank all those people for that magnanimity and kindness.”

A year later, Popovich thanked a reporter for asking a simple question: "How are you, Pop?"