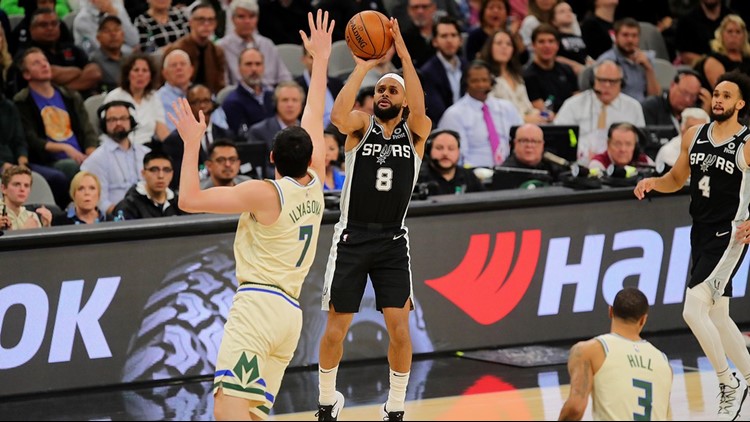 Photo by: Photo by Antonio Morano bit.ly/XR79FT / Special to KENS5.com
Veteran Spurs guard Patty Mills is an Australian whose mother is Aboriginal and whose father is from the Torres Strait Islands.

Notable: Wednesday's game is the first of four straight on the road for the Spurs. The Silver and Black play at Memphis on Friday, at Toronto on Sunday and at Miami next Wednesday . . . The Celtics own the second-best record in the Eastern Conference and third best in the league, behind the Milwaukee Bucks (32-6) and the Los Angeles Lakers (30-7). The Bucks are No. 1 in the East.

Coming off their best win of the season, the Spurs should be brimming with confidence Wednesday night when they take on the Celtics in Boston.

Not that they're expecting an easy time with the Celts, mind you. After all, Boston owns the league's third-best record and is second in the Eastern Conference standings.

Still, a 22-point victory against the high-flying Milwaukee Bucks has to be a morale booster for a Spurs team that has been up and down this season.

The Silver and Black had their way with the Bucks on Monday, rolling to a 126-104 rout at the AT&T Center. Milwaukee (32-6) has the NBA's best record and leads the East.

The Spurs team had lost at home to Oklahoma City (109-103) on Thursday and at Milwaukee (127-118) on Saturday before snapping the Bucks' five-game winning streak.

Sparked by Patty Mills, San Antonio nailed a season-high 19 of 35 three-pointers and tied a franchise record with 12 makes in the first half. Mills knocked down 6 of 10 threes and finished with 21 points.

Spurs coach Gregg Popovich was asked if he thought the game was the team's best of the season, from start to finish.

Forward DeMar DeRozan scored a game-high 25 points on 11-of-15 shooting and dished out a team-high seven assists for the Spurs. LaMarcus Aldridge and Rudy Gay had 18 points each and went a combined 4 of 5 from beyond the arc.

Aldridge has gone 16 of 23 from three-point range in his last five games, giving the Silver and Black's offense another dimension with his newly found flexibility.

"It opens up the spacing," Popovich said.

Wednesday night's game is the first of four on the road for the Spurs, who won't play at home again until Friday, Jan. 17.

“I think we all see it as a growing stage, all these things that we are going through," Mills said, looking ahead at the road trip. "The losses, and the wins, never ride the waves too high or too low. A road trip like this is a chance for us to grow even better and play against great teams.

"I mean, to play Milwaukee twice and then go to Boston, three great games in a row. The rest of the games on the road trip for sure is an opportunity for us to make (up) tremendous ground. It’s exciting. It’s a challenge for us and I hope we can make the most of it.”