No, Washington state is not mandating critical race theory in all public schools

School officials in Washington say there are no current or upcoming requirements for schools to teach critical race theory in the state. 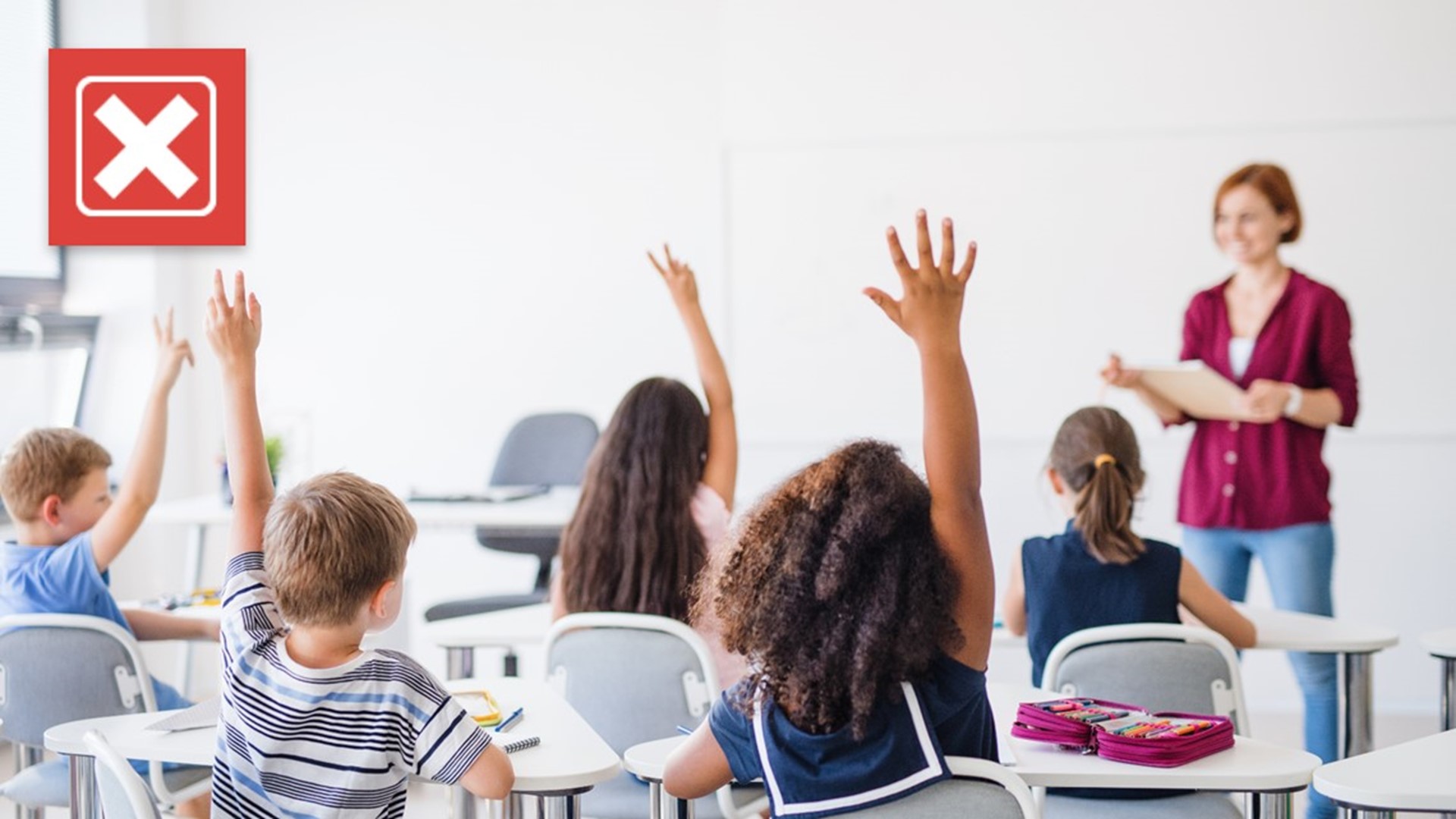 Critical race theory is a topic that's making headlines across the U.S., and many people are questioning what it is and whether or not it's being taught in public schools.

Now, VERIFY viewer Sandy wants to know if critical race theory will be added to the school curriculum in Washington state.

No, Washington state is not mandating critical race theory in all public schools.

About a month later, on Sept. 4, 2020, the Trump administration told federal agencies to end diversity trainings on "critical race theory” and “white privilege,” or “any other training or propaganda effort that teaches or suggests that the United States is an inherently racist or evil country.” Weeks later, in an executive order, former President Donald Trump expanded the ban to include federal contractors.

Although President Joe Biden revoked Trump’s executive order when he took office in Jan. 2021, according to Education Week, as of July 12, 26 states have introduced bills that would restrict teaching critical race theory or limit how teachers can discuss racism and sexism in the classroom, and 10 states have already enacted these bans.

In an article on the American Bar Association’s website, Georgetown University law professor Janel George wrote that critical race theory, or CRT, “is not a diversity and inclusion ‘training’ but a practice of interrogating the role of race and racism in society that emerged in the legal academy and spread to other fields of scholarship.”

“Critical race theory is actually a legal theory developed in the academy, meaning in law schools, in the late 1970s. Its founders include Kimberlé Crenshaw, Richard Delgado, Jean Stefancic, as well as Derrick Bell, who had actually been a civil rights litigator for the NAACP Legal Defense and Educational Fund,” George told VERIFY in July. “The originators focused on why is racial inequality continuing to endure in a post civil rights era. And so, what they recognized is that racism, unfortunately, is a normal feature of American life and that it's not individual bad actors but systems and institutions that can do the bulk of replicating racial inequality.”

Katy Payne, the director of communications at the Washington Office of Superintendent of Public Instruction (OSPI), told VERIFY there are no current or upcoming requirements for schools in the state to teach critical race theory. She also says discussions about race and racism in the classroom are being mischaracterized as critical race theory.

“It seems that diversity, equity, and inclusion are being misconstrued as critical race theory, when in fact, critical race theory is not mentioned in any K-12 education law, rule, or learning standard in Washington,” said Payne. “OSPI's mission statement states, ‘The goal of Washington's K-12 education system is to prepare every student for postsecondary pathways, careers, and civic engagement.’ Part of civic engagement is understanding our common history as well as providing opportunities for students to think critically about community issues, which may include issues of race and racism.”

Stephanie Davidsmeyer, the communications manager of the Washington State Board of Education, says while the Board’s authority on the topic is limited to establishing graduation requirements throughout the state, the Board is “not developing a curriculum based on critical race theory” either.

“As we state in our recently updated equity statement, the State Board is committed to academic attainment for every student. This will require access and opportunity gaps to be eliminated in order to narrow academic achievement gaps in student outcomes by race, ethnicity, gender identity, caste, and socioeconomics,” said Davidsmeyer.

Ally Barrera, a spokesperson for Spokane Public Schools — the second largest school district in the state — also told VERIFY that critical race theory is not part of its curriculum.

On May 5, Washington Governor Jay Inslee signed Senate Bill 5044 into law. According to Payne, the bill is focused on professional development for educators and other school district staff.

“The new law provides local school districts with the opportunity to determine how they will meet the requirement to use one of their state-funded professional learning days to train district staff in one or more of the following topics: cultural competency, diversity, equity, or inclusion,” said Payne. “Critical race theory is not named in Senate Bill 5044, nor is any specific curriculum.”

Our journalists work to separate fact from fiction so that you can understand what is true and false online.  Please consider subscribing to our daily newsletter, text alerts and our YouTube channel.  You can also follow us on Snapchat, Twitter, Instagram or Facebook.