The San Antonio Fire Department released the following order of events leading to firefighter Scott Deem's death. He was killed while responding to a fire at a northwest-side shopping center Thursday night.

San Antonio firefighter Scott Deem was killed in a shopping center fire Thursday night. He was a six-year veteran of the San Antonio Fire Department.
Author: Stacey Welsh
Published: 12:51 AM CDT May 20, 2017

The San Antonio Fire Department released the following order of events leading to firefighter Scott Deem's death. He was killed while responding to a fire at a northwest-side shopping center Thursday night.

9:10 p.m. Thursday: SAFD was dispatched to the Ingram Square Shopping Center for a structure fire in a strip mall. The strip mall is located on the 6700 block of Ingram Road. According to SAFD, Ingram Park Square is a 86,289 sq. foot retail building constructed in 1981.

L35 and E35 entered the structure to attack the fire and perform a primary search for potential victims.

Just after reporting heavy smoke and high heat conditions, the Battalion Chief in command ordered all Fire personnel out of the structure. An emergency evacuation tone was sounded at this time.

RELATED: Fallen firefighter described as family man with third child on the way

9:30 p.m.: Approximately 20 minutes into the incident, SAFD said one of the firefighters from L35 sounded a Mayday call. Immediately, a third alarm per the SAFD “Mayday” policy was dispatched. 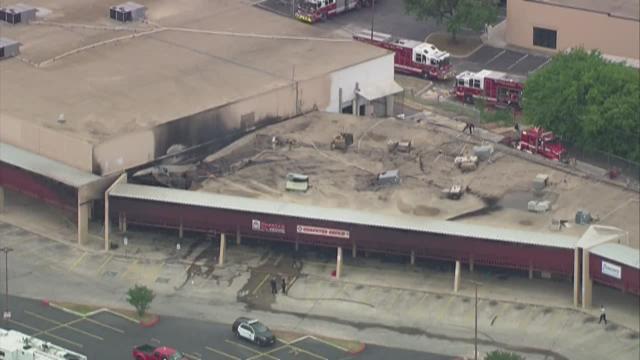 It was determined shortly after this that two of the firefighters from L35 were unaccounted for. SAFD said the Special Operations Battalion Chief was assigned to the Rapid Intervention Team group to focus on the search and rescue of the two missing firefighters.

9:36 p.m.: Approximately 26 minutes into the incident, one of the missing firefighters, Brad Phipps was located. He was brought outside the structure by SAFD's Rapid Intervention Team and was immediately transported to the San Antonio Military Medical Center for treatment.

Fire crews continued to search the structure to find the second missing firefighter as smoke and heat conditions worsened by the minute.

9:50 p.m.: Approximately 39 minutes in, SAFD said the missing firefighter’s emergency signal was activated. It was identified as L35 FF 2.

10 p.m.: Approximately 48 min into the incident an injured firefighter, Robert Vasquez, was brought out of the structure. It was determined he was one of the rescuers attempting to locate the missing firefighter. He was transported to University Hospital.

After multiple attempts to locate the missing firefighter, it was decided that the fire conditions within the structure were too dangerous to continue search operations, SAFD Chief Charles Hood said. All rescue operations ceased. SAFD said firefighting operations focused on efforts to prevent the spread of fire to adjoining structures.

11:34 p.m.: Command was informed that the missing firefighter, Scott Deem, could be seen from outside the structure.

Scott Deem was removed from the structure surrounded by his fellow firefighters, transferred to an awaiting Medic unit, and was escorted by the San Antonio Police Department to the Bexar County Medical Examiner’s office.

The investigation is ongoing and being led by the SAFD Arson Division, and it continues at the scene.

Vasquez's injuries were not life-threatening, and SAFD said he is recovering at home.

Phipps sustained "serious burn injuries." He is reportedly in critical, but stable, condition as of Friday afternoon. Both Phipps and Vasquez have been part of the department for about 11 years.

Deem is survived by his wife Jennifer, a child on the way, 13-year-old daughter Dakota and 7-year-old son Tyler. He was a San Antonio native and a six-year veteran of the fire department.