Former San Antonio Spur Tim Duncan has partnered with the San Antonio Food Bank to help aid the Virgin Islands in the wake of Hurricane Irma. 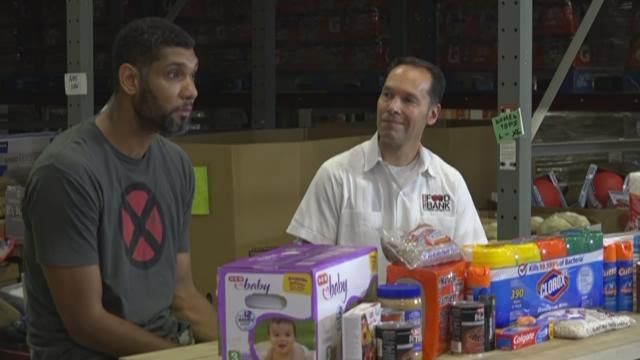 Tim Duncan came out to the San Antonio Food Bank Sunday afternoon to announce his partnership with the food bank for the Tim Duncan Virgin Islands Relief fund.

Duncan was born and raised in St. Croix, one of the main islands of the US Virgin Islands. He said luckily St. Croix didn't get hit as hard as some of the neighboring islands by Hurricane Irma, but many of the other Islands around there have been decimated.

Duncan has been in touch with several friends on the islands. They've told him that a lot of homes were destroyed and numerous people were left without power.

Duncan said he hopes to charter a plane down to the Virgin Islands later this week and will continue to go down there as many times as he needs to help them recover. When asked what motivated him to help out, he said he remembers growing up on those islands as a kid.

"I've been through it. I lived through it," Duncan said. "I know at some point somebody was doing this for me. I don't know who it was, but they did it for me so I can do it now, I can be that guy so why not do it?"

Monetary donations can be made at: https://www.youcaring.com/21usvirginislandrelieffund-942738#

Tim Duncan said the top items he needs are:

If you'd like to volunteer at the donation centers at HEB register at https://safoodbank.org/ways-to-help/give-time/

The first shipment is planned for St Croix for Thursday, September 14.