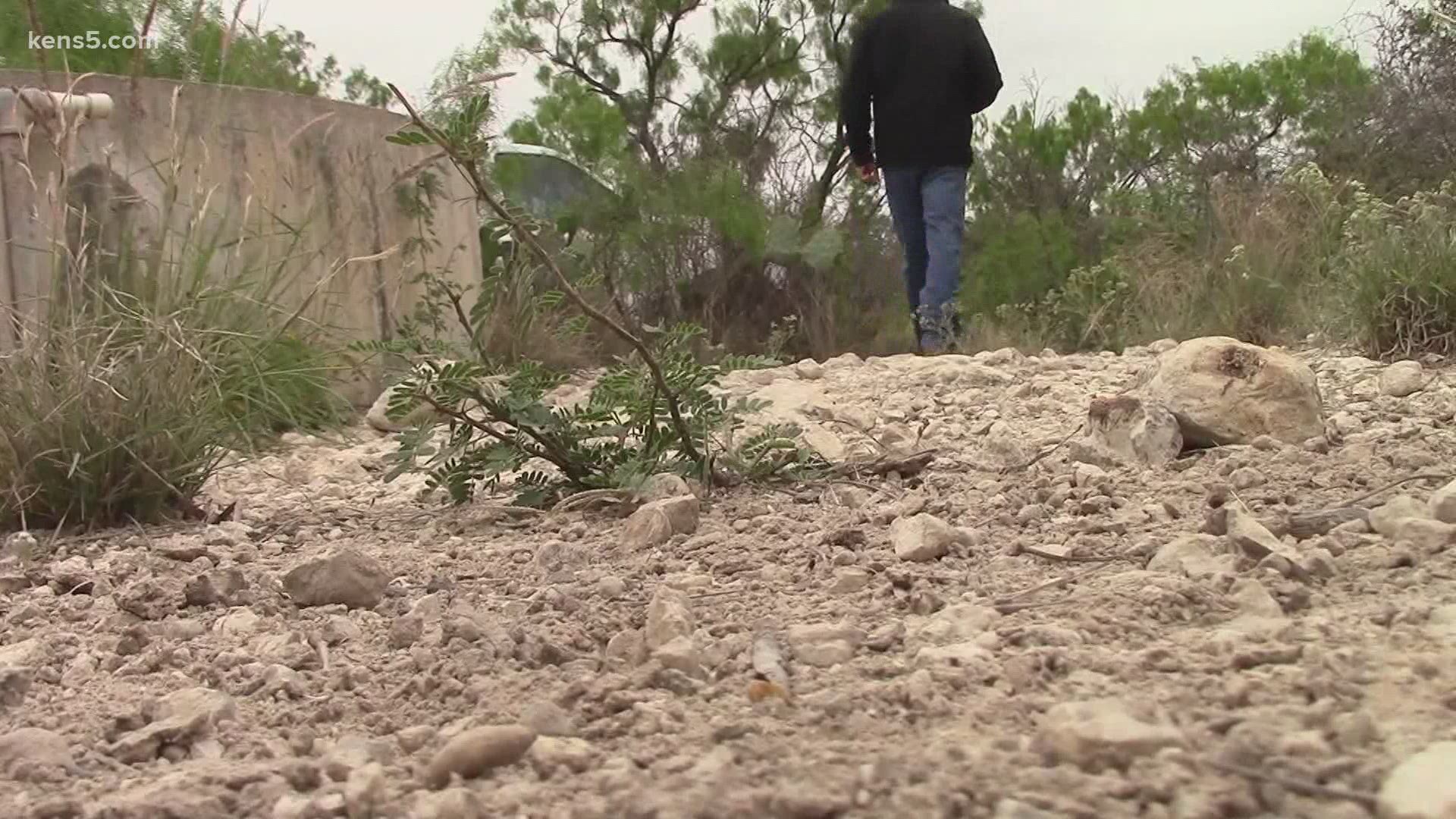 Kinney County officials said these groups are connected to home break-ins, stolen vehicles and damaged property. For the families who notice them traveling through their backyards, the fear of the unknown has them living on edge.

“There's just there's no telling where they might be at any given point in time,” said Cole Hill. “It's unnerving.”

Hill lives on an 8,000-acre ranch off Highway 90 between Uvalde and Brackettville with his wife and three children. Since January, he said they’ve had over 100 unwelcomed visitors.

“They cut through the brush. They come right across my driveway,” he said.

Hill said he’s seen a surge in migrants traveling in large groups and using his land as a highway.

The KENS 5 Border Team rode along with Hill while he checked half a dozen surveillance cameras he’s placed around his property since he started seeing the surge.

He said he’s also had multiple encounters with the groups of migrants while he’s working around the ranch.

“To stand there looking at a group of five, eight, nine, 10 men who are my age or younger who are obviously in pretty good shape, you just don't know what to do.” Hill said. “You don't know how to face that, how to encounter that, and it doesn't make you feel very good.”

Hill said the groups he’s seen are mostly made up of men, trespassing on his property at all hours during the day and night.

“These people could just walk up behind me at any given point in time and just crack you over the head or whatever. You really never know who these people are, why they're really here,” said Hill.

“I would see maybe 10 or 20 a year tops, and they were nonconfrontational,” said Hill.

But he said the groups he’s encountered recently are different.

“They're aggressive. The main thing is they are aggressively trying to avoid law enforcement,” said Hill.

Border Patrol officials said that the groups of migrants, mostly single male adults are trying to elude law enforcement and often use ranchlands to avoid authorities.

Officials also said most of these migrants that have been apprehended have a criminal record.

Hill said that’s why there’s a heightened fear that these new groups are bringing with them.

Hill said last month, he was working a few miles away on the ranch, when his wife called to tell him a group of migrants were surrounding their house.

“When we got there, there was one still on my front porch and the rest of them had run into my garage,” said Hill.

He said his young daughter was playing in a back room of the house and saw one of the migrants staring at her through the window.

A frightening reality for Hill and his family.

Border Patrol agents have been pulled from the field to process the massive numbers of family units and children, leaving local law enforcement to pick up the slack.

“There's probably no help on the way. And again, the criminal activity, the violence, the aggressiveness, and it’s only getting worse,” said Hill.

Schuster owns and runs a cattle ranch just outside of Brackettville.

“The unrest here right now is unnerving,” said Schuster.  “We're fearful in our own homes and we've never been like that in the 15 years that we've lived out here.”

Schuster said she’s had multiple encounters with the large groups of migrants, and seeing the same as Hill, the groups are made up of mostly men.

She said she came home last week to find a group sitting on her back porch.

“There were three sitting on my deck and they heard me come in. They heard the gate open and they could have left, but they didn't,” said Schuster. “If they wanted to, they could have attacked me. And it's just scary.”

She said she’s also caught chilling images on her game cameras, migrants moving through her property at all hours.

“A lot of our work, you start before daylight and you end after dark. And, you know, especially in the dark, you just don't know who's out there,” said Schuster. “Every time I leave my house, there's some kind of indication that they're out there.”

Hill said he checks his cameras every day, and is afraid of what he’s not seeing in those images.

“We don't want to have to do anything drastic on our own properties to protect ourselves," Hill said, "and that is my biggest fear."