The ban was issued for football, men's basketball and baseball. 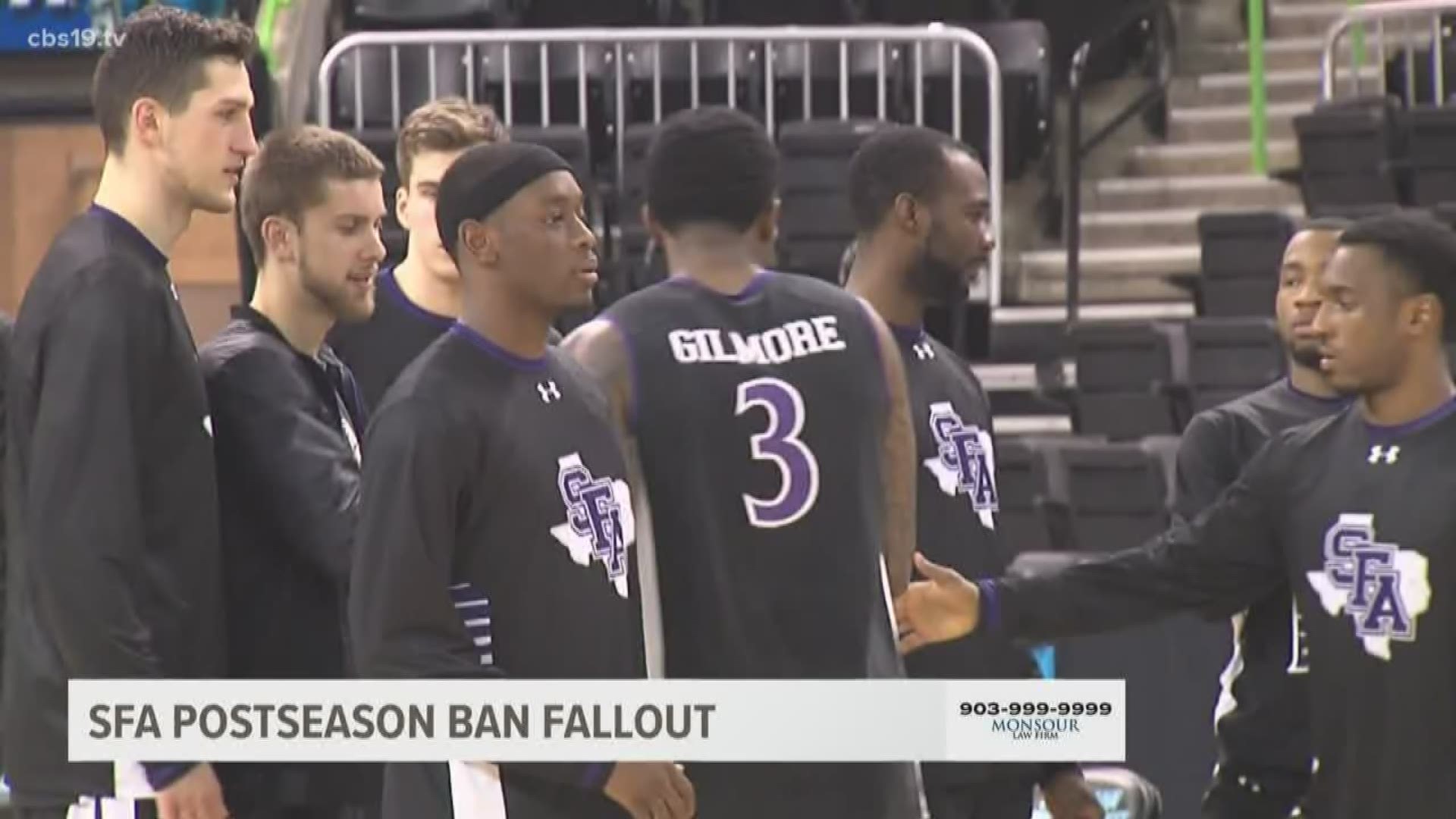 The ban, which was announced on Tuesday, is for men's basketball, football and baseball after the NCAA says the programs "failed to meet the minimum four-year cohort APR score of 930 needed to avoid penalties."

SFA issued the following statement after the ban was announced:

Today, the NCAA publicly released Academic Progress Report (APR) scores for all Division I athletic programs, including Stephen F. Austin. These four-year cohort APR scores began with the 2015-2016 academic year. As noted in its release, three SFA sports programs (men’s basketball, football and baseball) failed to meet the minimum four-year cohort APR score of 930 needed to avoid penalties. As a result, these programs must serve the Level I APR penalties, which include a reduction in countable practice hours and a one-year postseason ban. The University has been approved to delay the men’s basketball postseason ban until the 2021-22 season, while football and baseball will serve their bans during the 2020-21 academic year.

Beginning in 2013, an athletics department administrative error in the academic certification process resulted in the miscalculation of SFA’s reported APR scores. Once the administrative error was identified and corrected, the APR scores of these three programs fell below the 930 threshold. Procedures are now in place to prevent a reoccurrence  of the error.

The athletics department has been focused on academic progress and is proud of its current student athletes who collectively earned a 3.21 GPA for the spring semester.

This has certainly been a challenging time for all of us, and our thoughts continue to be with you and your families.  Together, as a university community, a state, a nation and a world, we are confident that we will get through this and thrive once again.

Today, we write to you on a different matter, sharing difficult news regarding our athletics program, and we do so under the premise of our Athletics Department’s core values: Accountability, Excellence, Integrity, Innovative and Teamwork, as that it what you deserve.  Today, the National Collegiate Athletic Association (NCAA), publicly announced a Negotiated Resolution agreement with Stephen F. Austin regarding several NCAA rules infractions concerning student eligibility that occurred from 2013-2019.

Let us begin by sharing with you the origins of the matter.

In the Spring of 2019, a member of our athletics department discovered that the process by which our student-athletes were being certified as academically eligible was not properly accounting for all NCAA requirements.

The primary issue was that former department personnel responsible for the certification process were incorrectly counting all semester credit hours to determine academic eligibility instead of counting only degree-applicable credits, as prescribed by NCAA rules.  This error--and other similar errors-- resulted in 82 student-athletes being improperly certified for competition over a period of six years, from 2013 to 2019, meaning 82 student-athletes competed while ineligible for SFA in the sports of football, men’s basketball, baseball, volleyball, softball, women’s golf, men’s and women’s track & field and men’s cross country.  The athletics department personnel responsible for the incorrect certifications are no longer a part of SFA Athletics.

After identifying these errors, the University immediately reviewed the academic standing of all current student-athletes and, when warranted, filed for and secured student-athlete reinstatement eligibility by the NCAA, clearing the students for competition.

Shortly after the discovery of the issue, the University retained outside legal counsel to work with the institution and the NCAA to determine the facts and scope of the potential violations.  Once that review was completed, SFA and the NCAA staff came to an agreement on sanctions through a Negotiated Resolution.  The NR is a process offered by the NCAA to resolve infractions cases when the facts are not in dispute, which is the case in our matter.  This route saved the University time and financial resources, but most importantly, lessoned the risk of more severe penalties if the University had opted to proceed through the traditional infractions process.

Ultimately, the institution and the NCAA agreed that the improper certification of 82 student-athletes for competition was a Level I violation. The University also acknowledged that it failed to exercise institution control when it did not detect or remedy the errors in a timely manner, given that in 2014, the NCAA had warned the institution through a standard review of academic progress data to strengthen its academic certification processes and it failed to do so.

The Level I (Mitigated) sanctions agreed upon by the NCAA and Stephen F. Austin include the following:

Again, on advice of counsel and after deliberate internal discussions, agreeing to a Negotiated Resolution was the fastest way to put this behind us and ultimately, to reduce the risk of more severe penalties (i.e., postseason bans, recruiting restrictions) that would have severely set back certain sports programs.

Unfortunately, there are additional significant ramifications for some of our athletic programs related to the NCAA violations involving improper eligibility certification.

In 2003, the NCAA instituted the Academic Progress Rate (APR), which holds institutions accountable for the academic progress of its student-athletes through a team-based metric that accounts for the eligibility and retention of each student-athlete for each academic term.  Student-athletes who are meeting requirements for academic progress towards a degree and remain at their original institution help bolster the APR score (out of 1000), while those who transfer out, fail to meet academic progress towards a degree or otherwise do not return to the institution decrease a team’s APR score.  While there is an annual APR score for each team released publicly, the NCAA reviews four-year cohorts of APR scores to provide a more accurate picture of a team’s academic standing.  If a team’s four-year APR falls below 930 in any given year, that program is banned from participating in postseason play the following season.

For the 82 SFA student-athletes discovered through the enforcement matter who were improperly certified as eligible, the information previously submitted for APR purposes required adjustment.  After making changes to reflect the NCAA requirements for credits, the APR scores for three of our teams fell below the 930 threshold.

In conjunction with standard NCAA APR penalties, three of our teams that fell below the 930 threshold will serve their postseason penalties during the upcoming 2020-2021 or 2021-22 seasons, allowing our coaches and student-athletes to move forward as soon as possible.  Therefore, the SFA football team is prohibited from participating in the 2020 postseason; the men’s basketball team will not participate in the postseason in 2021-22; and the baseball program will also be prohibited from participating in the postseason in the spring of 2021.  The University will file a request for a conditional waiver to the NCAA for suspension of future years of postseason restrictions, as the APR score for some of our teams may remain below 930 in subsequent years due to the four-year rolling score. In similar cases, waivers have been granted based on signs of academic and APR improvement by the involved sports program.

We understand that the tremendous young men and women in our athletic programs are paying a steep price for the administrative mistakes by former staffers, but they will have our complete and unwavering support in the days and months ahead.

Our actions since the discovery of the improper certifications in 2019 demonstrate our unwavering commitment to integrity and fair play and our willingness to hold ourselves accountable for our actions.  In fact, the NCAA enforcement staff and Committee on Infractions recognized this commitment in the Negotiated Resolution by crediting our “exemplary cooperation” in the investigation and citing SFA as a “model for other institutions” facing similar violations.

We are a stronger university today because of our actions and our values and we look forward to the next chapter of Lumberjack Athletics.

“The athletic department personnel responsible for these violations are no longer a part of SFA Athletics," SFA President Dr. Scott Gordan said. "I also want to make it clear that these violations occurred before our current leadership in athletics arrived and I know the athletics administration has been fully transparent with the NCAA and has been working hard to identify any and all violations. I have full confidence in our Athletic Director and new compliance personnel and have worked very closely with them to put measures in place that will significantly reduce the risk of this type of violation from occurring again. These measures include the hiring of an assistant to work with our compliance officer for eligibility checks and identifying a lead NCAA eligibility staff member in the Office of the Registrar who will be housed outside of the athletics program. Additionally, I have revamped our Athletic Council to have broader campus representation, increased faculty membership, and greater external oversight.”

Coach Carthel released he following statement regarding the ban:

“This post-season ban is a result of mistakes made in the past and doesn’t represent the current culture of SFA Football. When we took the program over, we inherited a team with a 2.06 GPA. However, through the hard work of our student-athletes and new academic support team, this spring semester our team achieved a 3.11 GPA! That academic success will continue into the future. I believe in these student-athletes, our current coaches, staff, and administration. There are some great days on the horizon for SFA Football, and we’re all excited to continue building this program into a champion!”

In April 2016, SFA hired Kyle Keller as the head men's basketball coach. Now, entering his fifth season at the helm of the Lumberjack basketball program, the Lumberjacks are coming off of one of the best single seasons in program history. The Lumberjacks posted a remarkable 28-3 record, a 19-1 conference mark, and pulled off one of college basketball's biggest upsets of all time with a victory over top-ranked Duke University at Cameron Indoor Stadium. Under the tutelage of Keller, who was named Coach of the Year, senior guard Kevon Harris was unanimously named Southland Conference Player of the Year, joining teammates Gavin Kensmil (Second Team) and John Comeaux (All-Defensive) on the All-Conference Teams.

The Lumberjacks likely would've made it to the 2020 NCAA Tournament, but due to the COVID-19 pandemic, "March Madness" was canceled.

RELATED: SFA's Harris wins Southland Conference Player of the Week after winning shot against No. 1 Duke

“I am disappointed on many fronts, not only for our men’s basketball student-athletes, but for the other sports affected by this ruling today, as well as our great fans and alumni," Coach Keller said regarding the postseason ban. "Neither this current basketball roster and coaching staff, nor myself have been implicated in any violations or findings by the NCAA. That being said, I acknowledge and respect the NCAA’s decision to levy this punishment due to improper advisement by our previous academic staff to a group of student-athletes. As a department under the direction of our current Director of Athletics, Ryan Ivey, we have all worked diligently to uphold the highest standards of academic integrity and will continue to do so. As long as I remain the head coach of the SFA men’s basketball program, we will continue to exemplify those standards of excellence both on and off the court. Both our future and present remain extremely bright at SFA. Axe Em ‘Jacks!"

The 2020-21 season will be the 13th season for baseball coach Johnny Cardenas leading the Lumberjacks on the diamond.

Cardenas also released a statement on the ban:

“Due to our APR team score as released by the NCAA this week, the Lumberjack baseball program will receive a postseason ban for the upcoming 2020-21 season. While this is a blow to our team and program, we stand together in our resolve to show how strong our leadership can be during these difficult times. Our department is unified behind a goal of operating with integrity and high standards in everything that we do, and continuing to strive for the best performance in the classroom and on the field.”