A historic 85-acre estate is being redeveloped.

SAN ANTONIO — The effort to buff the crown jewel of east San Antonio real estate into a shiny new future is moving forward at a frenetic pace. The 85-acre project is located just east of the AT&T Center and just north of I-10.

Project leaders said construction is rushing ahead on all phases of the $61 million dollar Red Berry estate re-development campaign. The 1950 mansion is being transformed from a private home to a top-shelf special events venue by the RK Group.

Credit: The RK Group
The RK Group created this rendering of the Red Berry Estate property on the east side.

Art Menchaca with the RK Group, said, " We are giving the old girl a facelift, if you will. We are taking down some walls, creating a more continuous space for a ballroom, renovating the former casino. It's going to be a game room, a nice, lush, elegant space that goes right out to the great landscaping."

Menchaca said the improvements will continue onto the grounds, as a swimming pool area will be filled in and transformed into an entertainment zone that will be able to accomodate about 600 guests.

"We're an events company, and we want to host great events, from weddings to corporate functions, to non-profit galas and everything in between. That's what we're here for and that's what we love to do," Menchaca said. He said because the venue will overlook a pristine lake, it will be unlike any other play place in the area.

Credit: Other
A photo from a drone shows the progress on the historic Red Berry Estate.

In addition to private events, team leaders said the contract with the City of San Antonio calls for the City to have use of the space 10 times per year for community functions.

"I think it's going to be amazing.  As far as I know, it's the only lakefront property for events that San Antonio has and has ever had. It's going to be really cool because we're going to have a grand view of all this water and across the way is our new headquarters so we're really proud about that too," Menchaca said.

In addition to staging special events at the mansion, the RK Group is well into construction on their new corporate campus, which will initially house about 300 employees. 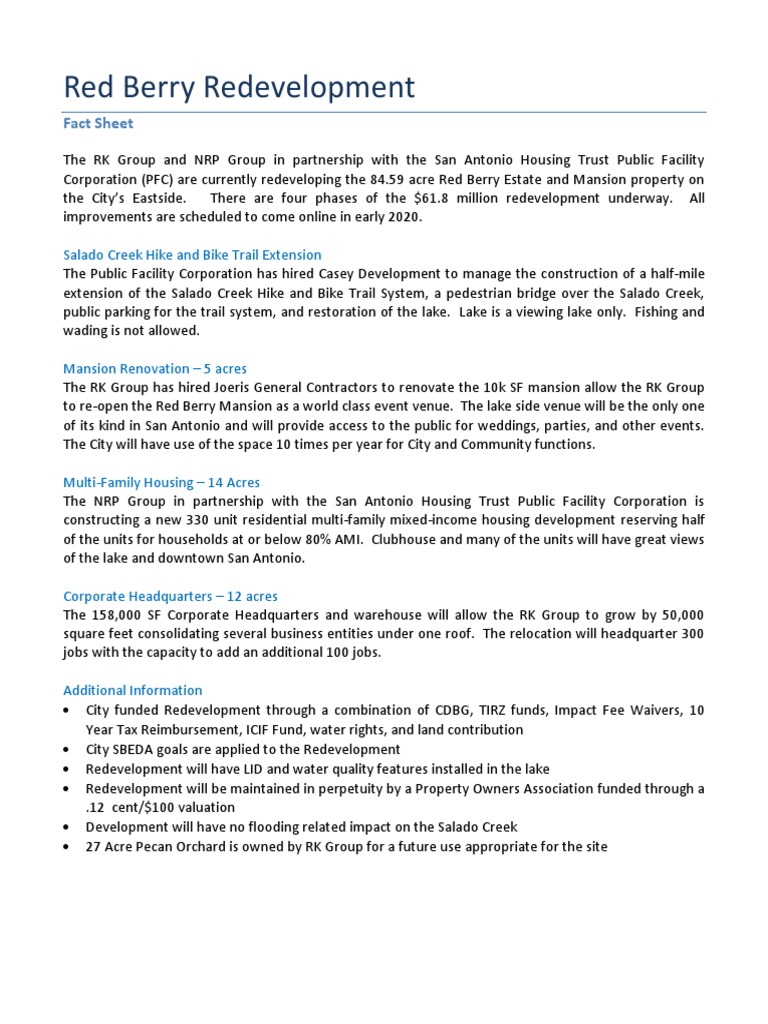 Red Berry Fact Sheet
The RK Group and NRP Group in partnership with the San Antonio Housing Trust Public Facility Corporation (PFC) are currently redeveloping the 84.59 acre Red Berry Estate and Mansion property on the City's Eastside. There are four phases of the $61.8 million redevelopment underway. All improvements are scheduled to come online in early 2020.

Company officials have said once the move is complete, they hope to hire about 100 new employees to keep growing their business.

"Just like the mansion has a strongly rooted history in San Antonio, so do we, and we're always looking to expand and branch out. We're all about growth and development for the city, for ourselves and for its people," Menchaca said of the new headquarters, which is scheduled to be 158,000 square feet in size.

The progress on the long-awaited project is already creating a buzz.

"We are so excited about the redevelopment of the Red Berry because it's been a long time in coming, and most importantly, it had tremendous community input, tremendous community support," said Debra Guerrero of the NRP Group. The firm is a partner in the effort, building a new 330 unit multi-family mixed-income housing development.

Company officials said half of the units will be reserved for households at or below 80 percent of the Area Median Income.

Guerrero said pre-leasing for The Salado at Red Berry will begin later in the fall and she believes prospective tenants will be wowed by the views of the lake and the city skyline to the west.

"We're already seeing investment with our Starbucks nearby and other commercial and retail development, so finally with the AT&T Center, the amazing golf course and the redevelopment of Red Berry, good things are happening for the east side," Guerrero said.

Tuesdae Knight, from San Antonio for Growth on the Eastside, said all the buzz related to the project appears to be positive. "We want all of that to work, to live, work and play on the east side, and they're going to offer us the opportunity to do that," she said.