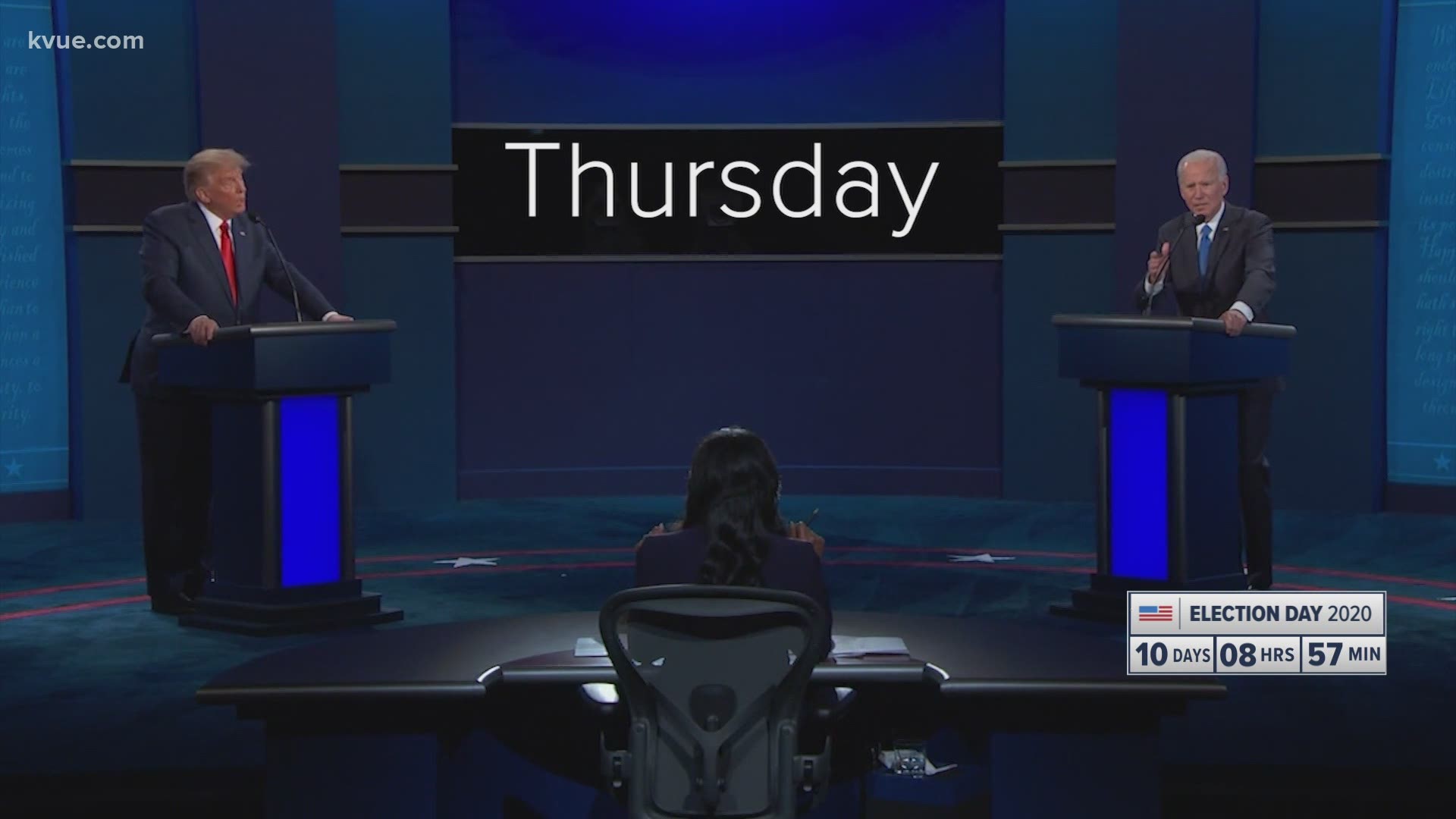 AUSTIN, Texas — It's an exchange that caught a lot of attention.

At one point during the debate, President Donald Trump asked, "Would you close down the oil industry?" to which Biden said, "I'd have a transition from the oil industry, yes."

President Trump later said in the exchange in part, "Basically what he is saying is he is going to destroy the oil industry. Will you remember that Texas?"

According to a 2019 report from the Texas Oil and Gas Association, there are 428,234 jobs supported by the oil and gas industry in Texas. Texas came in at the top spot for oil producers by state, according to the report.

Brian Smith, a professor of political science at St. Edward's University, said on Friday he believes this could impact races on the ballot in Texas.

"Politically, it's not Joe Biden who has to worry the most about this, but it's every other Democrat in the state running for office, because what that's done is it's opened up a new avenue for the Republican Party to attack Democrats on," Smith said. "Democratic candidates in the state have wanted to make this a race about Donald Trump. What that statement does is now it makes it a race about the Texas economy and the future of that economy."

One race specifically that could be impacted, Smith said, is the race for Texas Railroad Commission, which is a state agency that regulates oil and gas production.

There are three commissioners who are elected for statewide, six-year, staggered terms. On the ballot this November are Democratic candidate Chrysta Castañeda, Republican candidate James "Jim" Wright and Libertarian candidate Matt Sterett.

The candidates are fighting for Ryan Sitton's spot, who lost to Jim Wright in the GOP primary in March.

In a statement to KVUE, Democratic candidate Castañeda said:

"Oil and gas will have a place in our energy mix for the foreseeable future for two reasons: 1) our energy needs are vast and growing every day, especially as economies around the world develop, and 2) renewables won't be able to meet all our energy needs. Either way, the oil and gas industry must commit to cleaning up its impact on the environment, which is what I'm committed to do at the Railroad Commission."

“Joe Biden and Chrysta Castaneda’s radical plan to eliminate the oil and gas industry will cost Texans hundreds of thousands of jobs and steal millions of dollars from our school children. These extremists will sacrifice our way of life on the altar of the Green New Deal. The choice in this election could not be clearer.”

Professor Smith added he believes the statements take a national issue and make it local.

"This definitely hurts the chance of it flipping from red to blue in the fall, because what it's done is it's taken an issue that wasn't on the table and now really puts it on the forefront. And this is something that every Texan can relate to," Smith said. "When we think nationwide, most of the other energy-producing states tend to be Republican states, but really the exception of Ohio and Pennsylvania. So that's not going to change the big map. But here in Texas, this is something that now the Republicans who've been looking to find something to unify them, now might have that in this issue."

In a statement to KVUE from Abhi Rahman, communications director of the Texas Democratic Party, said:

“Republicans have failed our energy sector for years. Thanks to Republican leadership in this state and in this country, oil reached below zero dollars a barrel and energy companies like Exxon have had to go through mass layoffs and dropping out of the DOW. The job killers in Texas are Donald Trump and Greg Abbott. Our unemployment rate is at a staggering 8.9% because of their failures managing the coronavirus pandemic. It’s time for real leadership in Texas. It’s time for Joe Biden and Democratic majority in the Texas house.”

"Mr. Biden misses the mark on two fronts. In terms of foreign policy, a robust oil and gas economy in Texas means less dependence on Middle Eastern nations and more revenue for green energy research already in progress. In terms of domestic policy, oil and gas is a major driver of our economy. Plus, it takes petroleum products to produce solar panels and make the materials for wind turbines. It was a shortsighted remark, but we’re grateful that Texas voters are now more aware of what a threat to the economy a Biden-Harris administration would represent."

Who's Hiring? Kalahari Resorts and Hyliion have openings