In a tweet, Gov. Greg Abbott announced plans to cut funding to the legislative branch after a number of GOP priority bills failed. 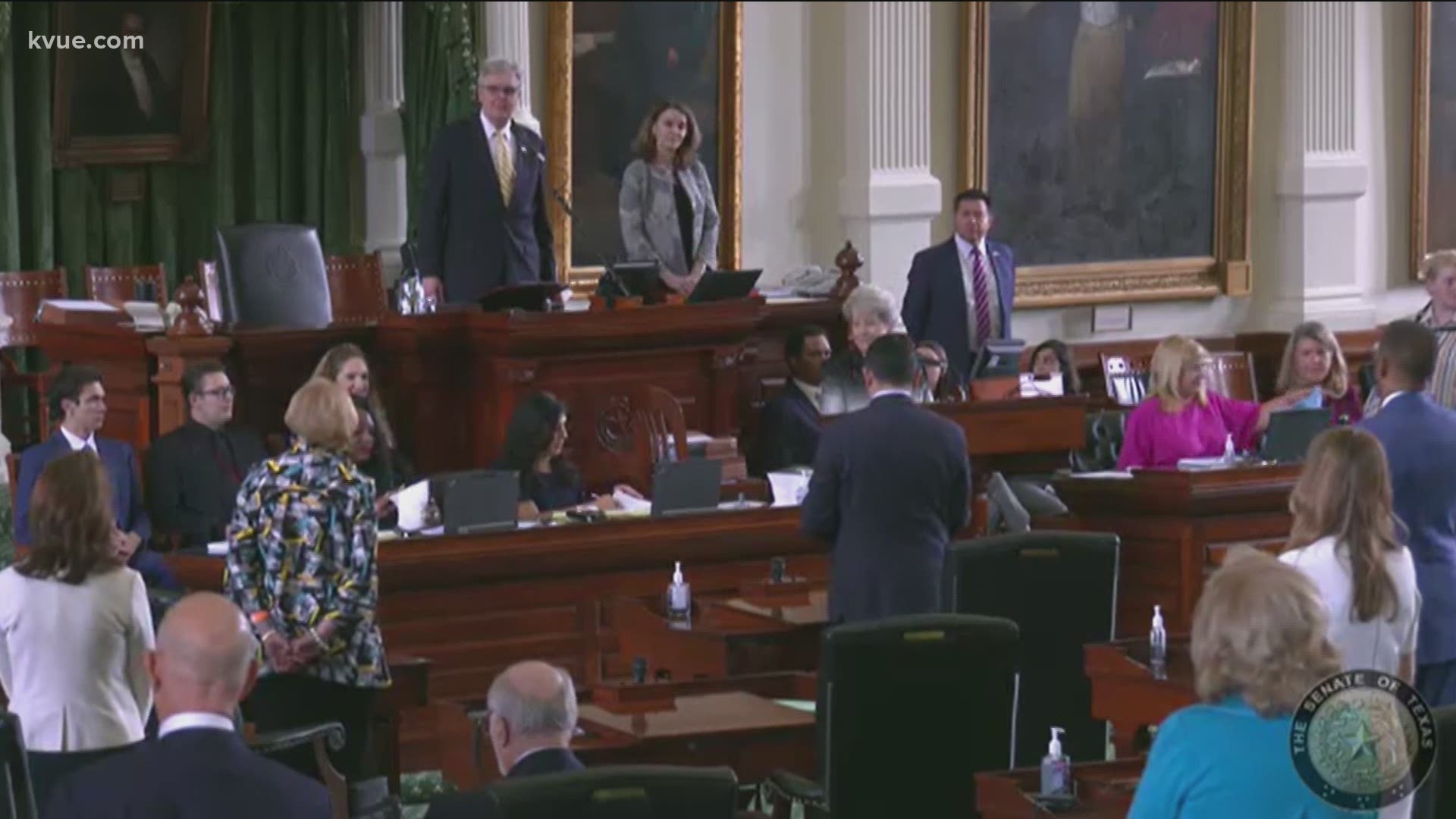 AUSTIN, Texas — Another Texas legislative session has come to an end, but Monday the traditionally jovial closing to 140-days of work by lawmakers had a much different tone.

"Last night was an interesting night to say the least," said State Rep. Dade Phelan (R-Beaumont), Speaker of the Texas House of Representatives.

The bill was returned from the conference committee with provisions that weren't previously passed by either chamber. Among other things, the bill would have limited early voting hours, required an ID to vote by mail and made it a crime for election officials to send vote-by-mail applications to voters who didn't request them. During the debate, Democratic members slowly started to trickle off the floor until there wasn't a quorum left to vote.

Lt. Gov. Dan Patrick (R) heavily criticized House leadership and the workflow of the lower chamber for allowing the GOP priority legislation to be killed. The criticism comes less than a week after Patrick called on the governor to hold a special session in June because three of his priority bills missed a key deadline to pass in the House and also died.

"No matter the external forces that tried to distract us or diminish the work of this body, we are the Texas House. And in this House we work hard and our rules matter. Our rules matter," Phelan told the representatives after they gave him a standing ovation to recognize his first term as Speaker.

The feelings of comradery were seemingly short lived. Shortly after the House adjourned, the Texas House Democratic Caucus held a news conference to discuss legislation members believe are harmful to Texans.

"This is by far the absolute worst session that I've ever been a part of," said State Rep. Gene Wu, (D-Houston) who was first elected in 2012.

Democrats were unable to defeat a number of GOP priority bills, from banning abortion at six weeks to changing how history is taught in public schools. Meanwhile, Republicans see the session as, mostly, a success in passing conservative legislation.

"We've accomplished a lot for the State of Texas and I'm proud of all of you and thank you for your hard work," Patrick (R) said to the members of the Senate before they adjourned sine die Monday. "I normally say I'll see you in 18 months, but I might see you in 18 days or so."

It's no secret that Texas lawmakers will have to return to the Capitol for a special session in the fall to take up redistricting, after a delay in the census data prevented lawmakers from re-drawing political maps during the regular session. Gov. Greg Abbott announced plans to add other GOP priority bills onto a special session call last week and wrote in a statement Sunday, he will also add election reform:

"I declared Election Integrity and Bail Reform to be must-pass emergency items for this legislative session. It is deeply disappointing and concerning for Texans that neither will reach my desk. Ensuring the integrity of our elections and reforming a broken bail system remain emergencies in Texas. They will be added to the special session agenda. Legislators will be expected to have worked out the details when they arrive at the Capitol for the special session."

The question looming over lawmakers is, will the governor call them back before the fall to pass those bills?

That's not the only thing looming. On Monday, Gov. Abbott tweeted plans to veto Article 10 of the State budget, the part that funds the legislative branch, in response to the House Democrats' walkout.

I will veto Article 10 of the budget passed by the legislature.

No pay for those who abandon their responsibilities.

Democrats say the move would have far-reaching effects.

"If you defund the Legislature, you basically have a monarchy because you're eliminating that branch of government that represents the people," said State Rep. Donna Howard (D-Austin). "That being said, if you look at what that article covers, not only is it our offices; it's all of the people."

On Monday evening, the governor released another statement, writing lawmakers will have several bills on the special session call and he expects them to work out their differences before the special session, though he gave no hints about when that will be:

"From Day One of this session, our priorities were centered around hardworking Texans and building a state that is safer, freer, healthier, and more prosperous. We added to that the imperative that we secure the Texas power system to ensure it never fails again. We kept those promises while also delivering one of the most conservative legislative sessions our state has ever seen.

"However, there is more we can and must do to ensure a brighter future for Texas. At the beginning of the legislative session, I declared Election Integrity and Bail Reform to be must-pass emergency items. It is deeply disappointing and concerning for Texans that neither reached my desk. Ensuring the integrity of our elections and reforming a broken bail system remain emergencies in Texas, which is why these items, along with other priority items, will be added to the special session agenda.

"I expect legislators to have worked out their differences prior to arriving back at the Capitol so that they can hit the ground running to pass legislation related to these emergency items and other priority legislation. During the special session, we will continue to advance policies that put the people of Texas first."