The budget doesn't defund the SAPD, and officers got 5% raises while the overtime budget went down. The public safety portion of the budget costs $827 million. 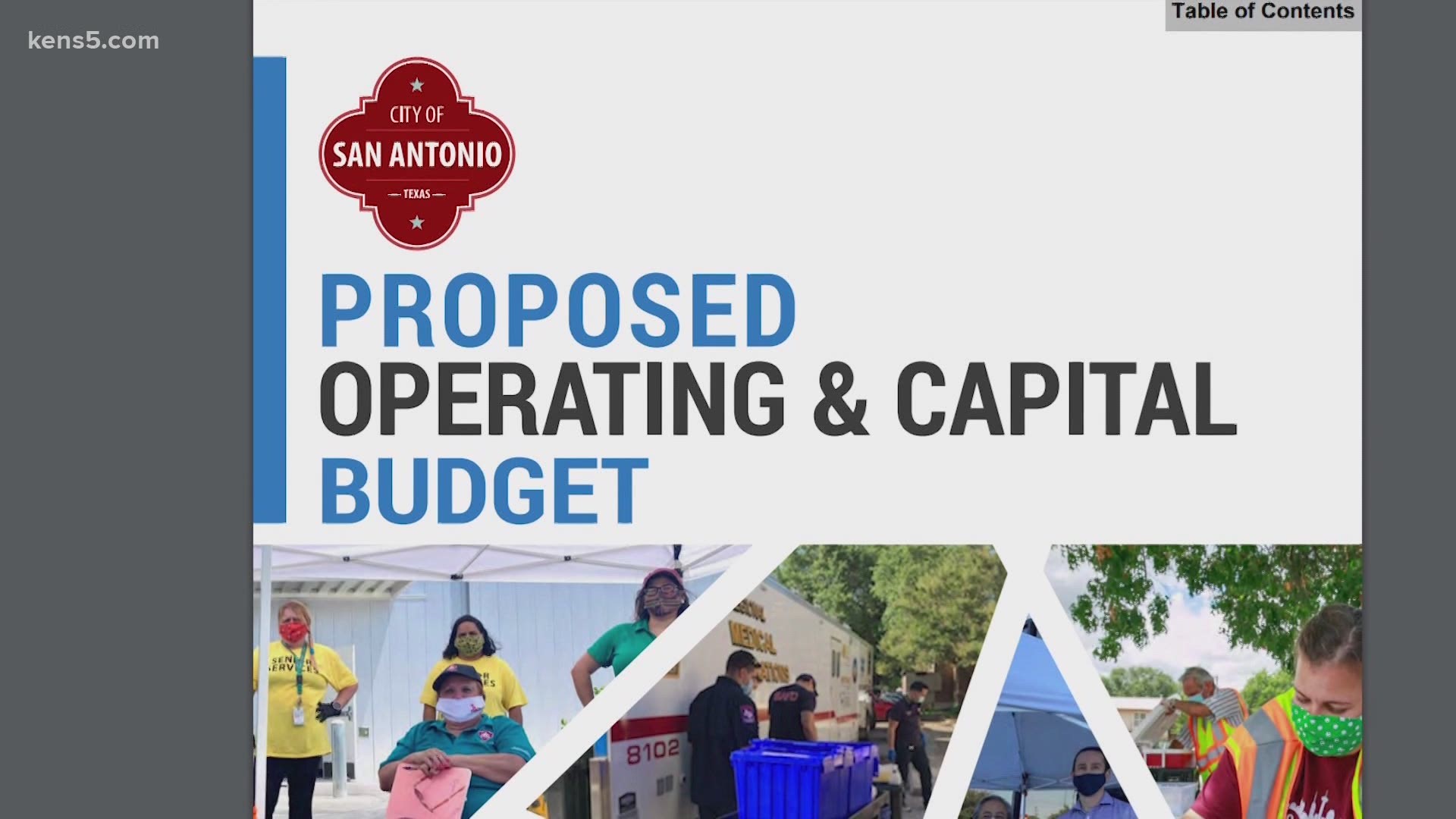 SAN ANTONIO — Months of work are complete and the nearly $3 billion budget for San Antonio was approved by council Thursday.

The Coronavirus pandemic’s impacts on city revenue, calls from citizens to defund the police and housing needs in San Antonio dominated the council meeting adopting the FY21 budget. The virtual meeting lasted more than four hours.

City officials say a fair and balanced budget was difficult to achieve during a global pandemic and with challenges in the community.

“This was by far the most difficult budget process I have ever been part of,” said District 1 Councilmember Roberto C. Trevino. “Thank you to everyone who made their voice heard through the speak up process. Your feedback will and will continue to be evaluated and implemented. We must continue to have difficult conversations leading up to the SAPD contract and the fiscal year 2022 budget.”

In late May, protesters took the streets of San Antonio following the killing of George Floyd in Minnesota.

His death and other African-Americans who were killed in controversial incidents increased the cries for police reform, specifically shifting funds from SAPD to other areas of service for the community.

In FY21 officers will receive a 5% raise. San Antonio is obligated to pay up, bound by a contract from 2016. The deal pushes up the public safety budget to $827 million.

Calls to defund the police department continued in the public comment portion of the meeting Thursday morning.

Dozens of people took time to explain how they felt the proposed budget did not resolve the issues they see in San Antonio.

One commenter was Celeste Brown, a community activist and a woman who calls Darrell Zemault her second father. Zemault was shot by a San Antonio police officer Tuesday and died.

“The budget you will vote to approve today does not represent the community's needs,” said Brown. “It does not reflect the fact that residents that had never before even thought to engage politically showed up in droves to call out the over-inflated police budget.”

“Through this budget, I am proposing to shift resources to begin to redefine how we provide public safety and set us on a long-term path to meaningful change,” wrote Walsh in the transmittal letter to the Mayor and Councilmembers.

Another initiative provided for in the new budget would review and refocus how police services are provided.

“We do have to acknowledge there is a lot of work to do and there’s a lot of pain in the voices that we hear from our community and we’re going to be working everyday to address them and work together in doing so,” said Mayor Ron Nirenburg near the end of the budget meeting.

“While this budget may not reflect the exact changes that some of our residents have called for, I believe that it does commit to the health, housing, education and workforce needs of our city,” Nirenburg added in a statement Thursday evening.

Others voicing their feedback during public comment stood in defense of SAPD receiving full funding.

“I absolutely agree with the budget,” said Amanda Thompson. “We would be ignorant to deny that there are black people who are victimized by police today, but I don't think the solution is making our streets more unsafe. We need our police. We should stand and protect and unite with our police, with our councilmen.”

“Everyone in our community who values safe neighborhoods is grateful that the City Council today approved a City Budget that rejects those who have been calling to ‘defund police.’ While I’m thankful to our Council Members, and look forward to working with them on ways to continue to improve public safety in our city, we should all be aware that, at this very moment, there are radical groups out there working to collect signatures for a ballot initiative to strip away important police officer employment rights,” said SAPOA President Michael Helle. “Having lost the fight on the city budget, these groups are now gearing up for a larger battle - to repeal our civil service and collective bargaining rights. The City Council, and the people of San Antonio, should make no mistake: this ‘repeal’ movement is just one more way to ‘defund police!’”

District 9 Councilmember John Courage pointed out he thinks some solutions to the calls for change could lie in the police contract.

“I will not sit by and not recognize that there are reforms that need to be made in law enforcement in our community. We know we're dealing with a very difficult contract that we've had with San Antonio Police Officers Association and there's some significant improvements that need to be made in that contract,” said Courage. “At the same time, though, as a former military policeman, I understand the challenges that every police officer faces every day when they go out on the streets. That certainly doesn't justify any deaths of people. There have got to be other ways … for the police to do their job to protect the people in this community other than having people die at the hands of police officers.”

Manny Pelaez, the councilmember for District 8 assured those calling to defund SAPD that he heard them and understood some believe giving a robust budget to law enforcement is not caring for people of color.

“That message comes across loud and clear, but I also get a message from my neighbors. They're telling me they want a well-funded police department. They want patrols in their neighborhood, they want to make sure that their 911 calls are answered on time,” said Pelaez. “Just because they don't show up to city council and holler at us and because they're not marching in the street doesn't mean that I don't listen to them.”

Housing was another big topic surrounding the budget.

With $25 million allocated to affordable housing in the city, more than 1,700 families are expected to benefit from the program over the next fiscal year.

“Our city now was the largest emergency housing fund in the country and continues to seize upon opportunities around issues like workforce development that will elevate the quality of life in our community,” said District 6 Councilmember Melissa Cabello Havrda. “We've taken the instability created by the pandemic and found opportunity.”

The FY21 budget is $7.7 million lower than last year, due to reduced revenue attributed to the pandemic’s impacts on hotel occupancy, airport revenue and sales taxes typically paid by economic activity.

Some areas seeing cuts include no raises for civilian employees and a hiring freeze for the next two years.

Street maintenance is losing $8 million in funding, which was about 7% of its budget.

A yearly payment of $1.7 million to the Hemisfair Park Area Redevelopment Corporation was eliminated.

“This is not the last step in how we make sure that we are giving the resources to our community,” said District 2 Councilmember Jada Andrews-Sullivan. “This is the first step of making sure that we are now not only speaking to equity, but equality and inclusion.” 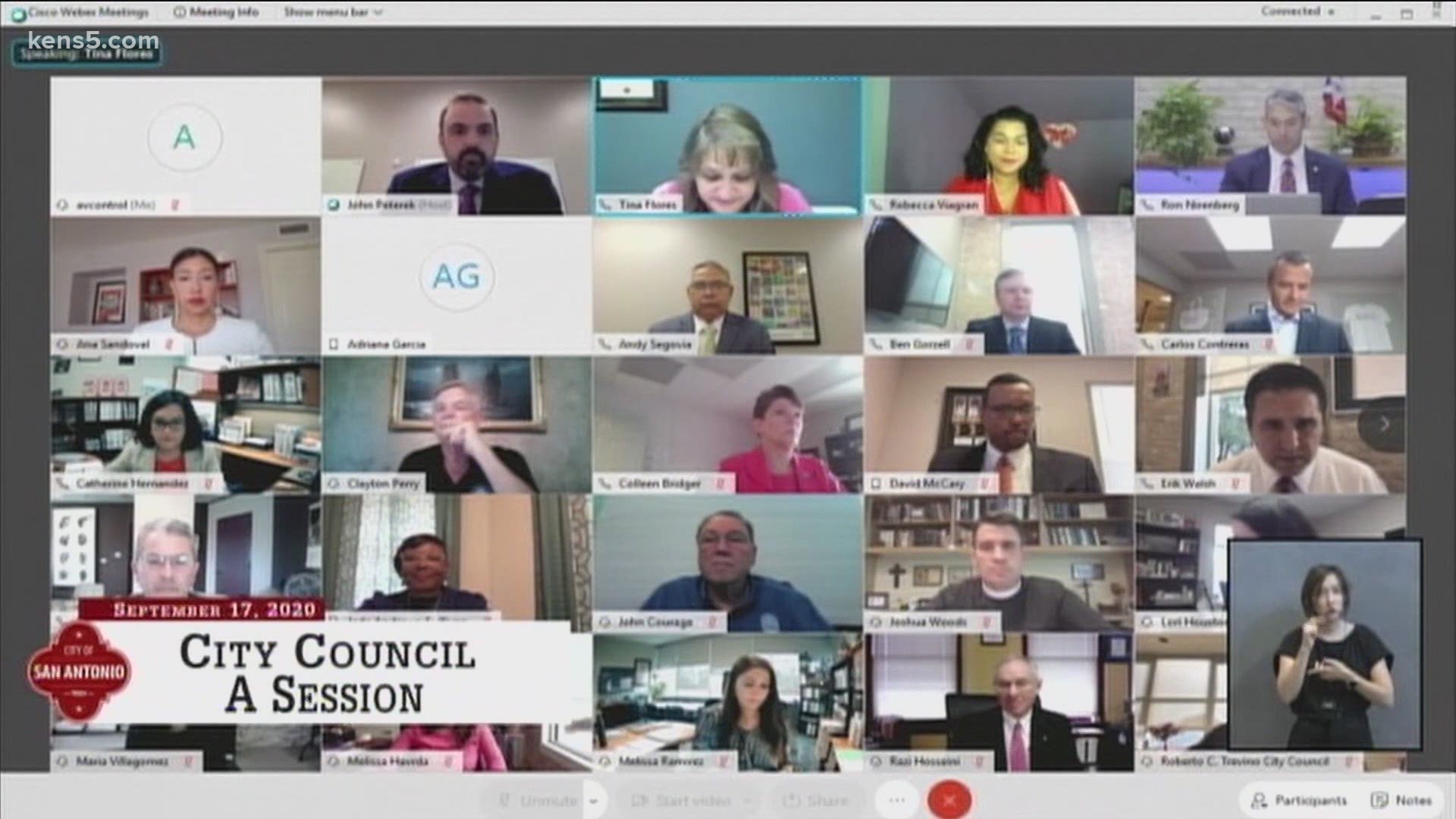