Mills to Trump: 'Check [your] rhetoric at the door' before coming to Maine

The President plans to tour the Puritan swab manufacturing site in Guilford on Friday. 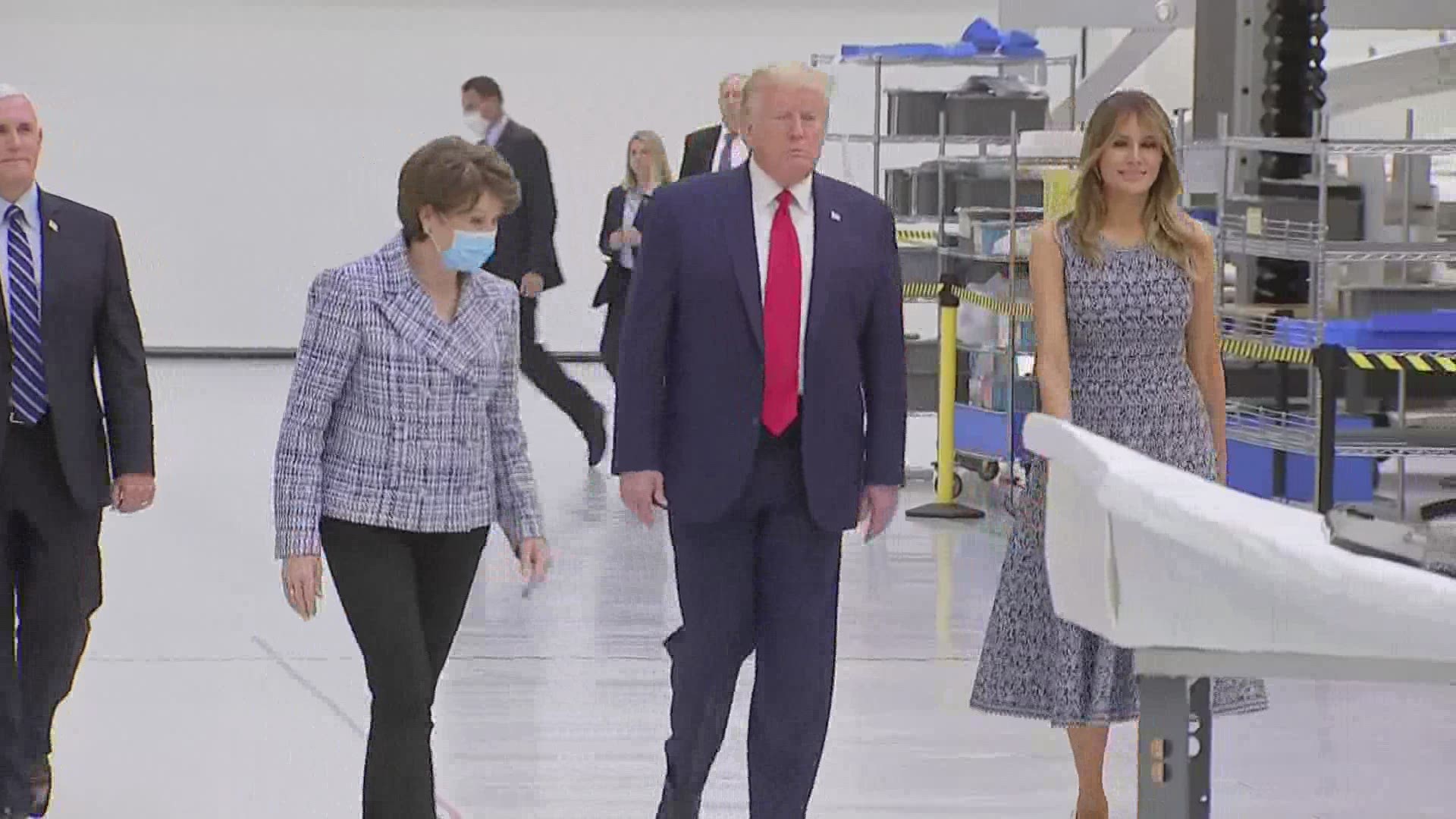 Trump plans to visit the Puritan Medical Products facility in Guilford on Friday to tour the COVID-19 nasal swab manufacturing plant there and will deliver remarks.

This will be Trump's first trip to Maine during his Administration.

The President held the call with governors from across the country in response to the nationwide protests over the killing of George Floyd.

Later in the call, Trump said Mills' warning not to visit Maine may convince him to push forward with the trip, saying "She tried to talk me out of it. Now I think she probably talked me into it. She just doesn’t understand me very well. But that’s okay.”

Mills held a press-only briefing regarding her call with the President and the country's governors on Monday at 5 p.m. at the Blaine House in Augusta.

Mills maintained that the President's presence in Maine could create 'unrest.'

Mills said Trump "lashed out" at the country's governors during the call. The call, typically led by Vice President Mike Pence, usually provides governors with an opportunity to exchange information about their response to the pandemic, she said.

"This morning's call, however, was different," Mills said. "In the wake of George Floyd's death in Minneapolis and the ensuing protests including here in Maine, the President this morning lashed out unexpectedly."

"He and Attorney General [William] Barr indicated to us that they had intelligence that linked the protests to the quote radical left and that these were the same quote-unquote troublemakers that led the Occupy Wall Street movement, and they pledged to prosecute protesters under federal law."

Mills said "both the tone and the substance of the President's comments were troubling," and that she asked for that intelligence to be shared. She said she asked Barr under what federal law he wanted governors to prosecute protesters.

"Neither question was answered," Mills said.

She said she told Trump that due to the "vitriol" of his comments, she was concerned his presence in Maine "might create unrest."

The governor said she has not seen leadership in the President, and said she called for "empathy, compassion, courage and understanding" for protesters against injustice instead of hatred, division, animosity, and distrust.

She said she asked that Trump "check his rhetoric at the door" when he arrives in Maine.

Under Mills' Executive Order, out-of-state travelers coming into Maine must quarantine for 14 days.

Maine Congresswoman Chellie Pingree released a statement regarding the President's pending visit to Maine. Pingree said Mills has 'good reason to worry' that Trump's vitriol could spark unrest in Maine.

"While the nation mourns the killing of George Floyd and the deaths of more than 106,000 Americans to COVID-19, he is using the bully pulpit to incite violence. Whether he’s calling peaceful protesters ‘thugs’, advocating for police to ‘shoot’ and ‘dominate’ American citizens, or demonizing lifesaving, science-based advice to prevent the spread of a deadly pandemic, President Trump’s inflammatory words have had deadly and divisive consequences," Pingree said.

"His failure to unite our divided nation or lead with compassion at this historic moment has only fanned anger that desperately needs to be recognized and calmed. If President Trump cannot put the safety and future of this country ahead of his need to tear down those who may disagree with him politically, he should not come to Maine.”

RELATED: How the COVID-19 pandemic is affecting those experiencing homelessness in Maine

RELATED: Phase 2 of Maine's reopening plan begins, as businesses can still deny service to those without face coverings