Mills: 'I again ask the President to check his inflammatory rhetoric at the door and abandon the divisive language'

Trump's pending visit has sparked controversy among leaders in Maine, primarily with Gov. Janet Mills, who urged Trump not to come. 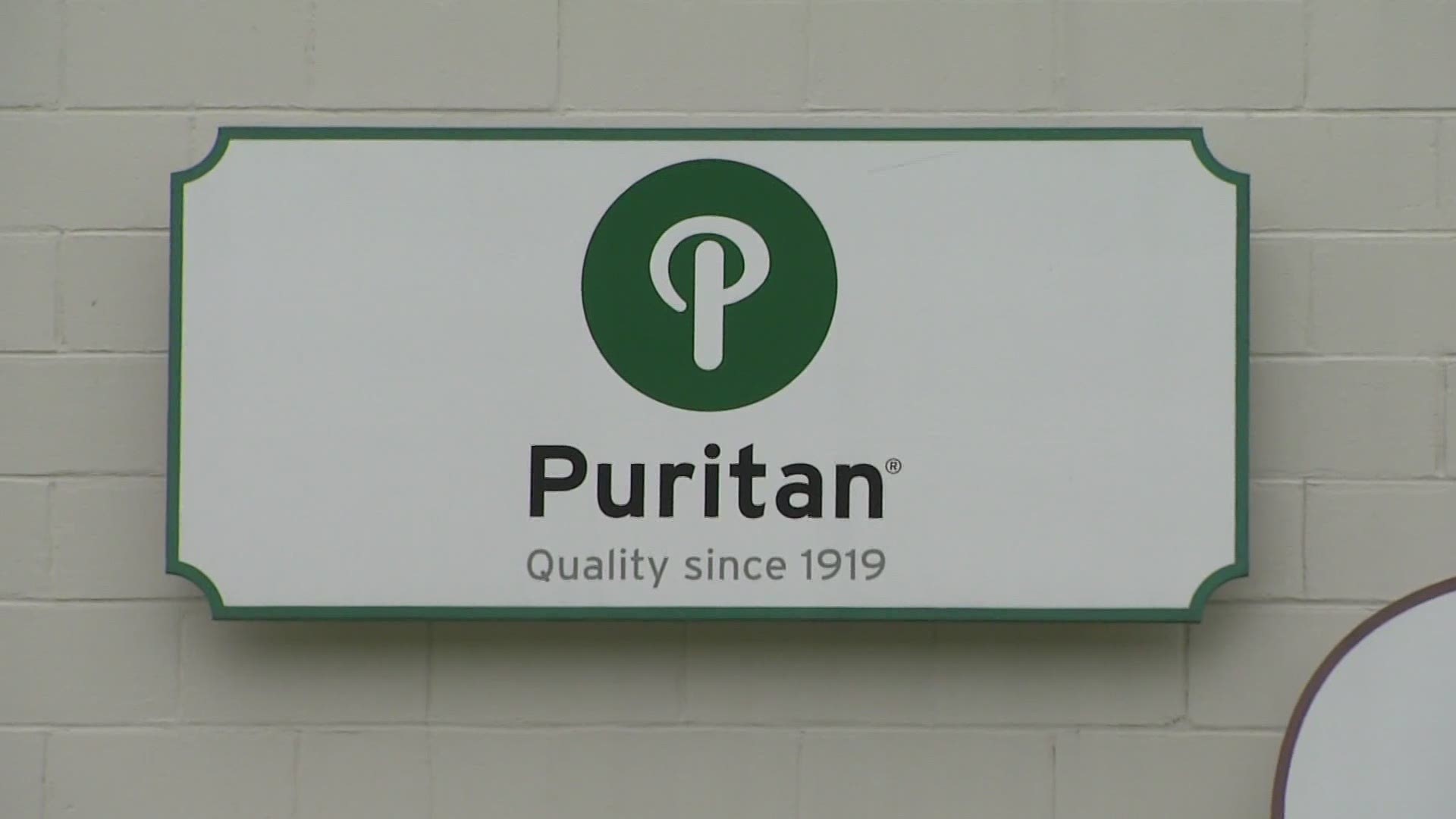 GUILFORD, Maine — President Donald Trump will touchdown on Maine soil Friday around 2 p.m. in Guilford. It’s his first visit as president to Maine.

His pending visit has sparked controversy among leaders in Maine, primarily with Gov. Janet Mills, who urged Trump not to come. She said his visit would cause ‘unrest’ and asked that he “check his rhetoric at the door” when he arrives in Maine.

Worries of not only the coronavirus pandemic but also the current civil unrest over the death of George Floyd are among the reasons Mills and other leaders are worried about his visit. Protests are planned in response to his visit.

RELATED: Mills to Trump: 'Check [your] rhetoric at the door' before coming to Maine

On Thursday, Mills issued another statement about the President's trip to Maine:

“I am proud of the extraordinary Maine companies, like Puritan Medical Products, who have adapted to meet the unprecedented challenges of this pandemic and whose work is saving lives. They are worthy of our praise and to them I am grateful.

As the individual responsible for the health and safety of Maine people, including those who support and do not support the President, I again ask the President to check his inflammatory rhetoric at the door and abandon the divisive language that sows seeds of distrust among our people. I hope he will heed this call and appeal to the best in all people and lead us with courage and compassion through this difficult time.

I also urge all Maine people who are gathering tomorrow – whether to rally to support or to protest opposition – to exercise that fundamental right with respect and do so safely amid this deadly pandemic. Let us all remember during this time of high tension that, regardless of our various and differing political beliefs, we are all members of this Maine family. We all love our country, we all love our state, and we all want the best for both.

I am also hopeful that the President during his roundtable will hear the concerns of our commercial fishing industry, a vital part of our economy that is hurting right now. I am especially hopeful that he will address the impact that harmful Federal trade policies have had on them over the course of the past several years and pledge support for greater Federal financial assistance to aid them. That would be welcomed and helpful.

While the President is in Guilford tomorrow, I will be doing my job, as I do every day, striving to protect the health and wellbeing of Maine people amid this pandemic, examining how we can chart a course to economic recovery, and doing all I can to guide Maine through this difficult time.”

RELATED: Doctor: Protests could lead to spike in coronavirus cases

Here’s what other political leaders in Maine have to say about Trump’s visit.

Credit: AP
Sen. Angus King, I-Maine, asks questions during the Senate Armed Services Committee hearing on the Department of Defense Spectrum Policy and the Impact of the Federal Communications Commission's Ligado Decision on National Security during the COVID-19 coronavirus pandemic on Capitol Hill in Washington, Wednesday, May 6, 2020. (Greg Nash/Pool via AP)

“On the day a Governor is sworn in – of any party, in any state – he or she takes on a sacred responsibility that overrules every other priority: ensuring the health and safety of their state and people. I know that Governor Mills feels this responsibility deeply, which is why she raised security concerns in the call with the President.  As a former prosecutor and state attorney general, she has extensive experience and strong judgment that informs each decision she makes regarding the best interests of Maine people.

Right now, our state and nation are in a fragile moment, which must be handled carefully. Governor Mills was elected by the people of Maine to manage these situations, and if she believes the President’s trip (while normally welcomed) would either hinder our state’s gradual, science-based reopening plan or inflame tensions at what have been peaceful protests, I respect her judgment.”

Credit: AP
Sen. Susan Collins, R-Maine, speaks during a hearing to examine caring for seniors amid the COVID-19 crisis on Capitol Hill, Thursday, May 21, 2020, in Washington. (AP Photo/Manuel Balce Ceneta)

When asked if she thought Trump's visit to Maine was a good idea, concerning the pandemic and high tensions over George Floyd, Collins said:

“As I said in a speech from the Senate Floor, we face the confluence of a health crisis, an economic depression, and a killing that laid bare the racial injustice that still taints our country.  It is at times like this that a President needs to speak to the Nation, to pledge to right wrongs, and to calm inflamed passions. I hope that the President will advance that effort wherever he goes, including on his visit to Maine.”

When asked about the burden the visit puts on law enforcement, Collins said:

“I have not been part of the security discussions but am aware that the Governor has concerns about the President’s plans to visit.  I know that the Governor will work with the State Police, county and local law enforcement, and the Secret Service to ensure that the visit is as safe as possible.”

Collins said she will be in Washington, D.C., when Trump visits on Friday, so she would not be in Maine to see Trump during the visit.

“We do not need the President visiting the state of Maine. I'm pleased he's coming to recognize the wonderful people who are working hard to make the swabs that make our tests so much more available—that's critical work that they're doing here—but he's not coming here to do this. He's coming here to have a political rally in the 2nd Congressional District. It's just one more way to divide us. If there was ever a time we needed a president who could bring us together, that could talk about these difficult issues and reassure us that we can move forward together, it's now. That's not what we have.”

Credit: AP
FILE - In this April 27, 2019, file photo, U.S. Rep. Jared Golden, D-Maine, speaks during a ceremony for a Zumwalt-class guided missile destroyer named for former President Lyndon Baines Johnson in Bath, Maine. Golden said his decision to split his vote on the two articles for impeachment of President Donald Trump on Wednesday, Dec. 18, was about facts, not politics. (AP Photo/David Sharp, File)

“The men and women of Puritan Medical Products deserve to be recognized for their hard work and the contributions they are making to the national effort to overcome the coronavirus. With his visit tomorrow, the president has an opportunity to step back from the divisive leadership he has offered the nation and focus on something positive that every American can be proud of: the dedication of these workers in service to our country.

I have previously joined my colleagues to call on the president to use the Defense Production Act to aid the nation in its response to the pandemic. Now that he has done so, the increased production of swabs here in Maine stands as evidence of what America’s skilled workforce is capable of when we focus on bringing manufacturing home to the United States.

While I’m glad to hear that the president will also hold a roundtable with representatives of Maine’s fishing industry while he’s in our state, I have to ask: where has he been for the past four years? Lobstermen have been raising the alarm with the White House for some time, and I have been asking for help from the Trump Administration since I came to Congress. Last July, I led the Maine delegation to formally request that the president intervene to block his own administration’s proposed regulations on the lobster fishery. Nearly a year later, we still haven’t received a response or seen any action against these harmful regulations. I genuinely hope the president commits the full power of the presidency to protecting Maine’s lobster industry, and I am ready to work with him — as I have been for some time now — if he will commit to taking action. This debate has been going on throughout his presidency. We are long past the time for roundtables — Maine lobstermen need action.”