Of the more than 1.96 million mail-in ballots issued in San Diego County for the California gubernatorial recall election, 837,643 had been returned as of Monday. 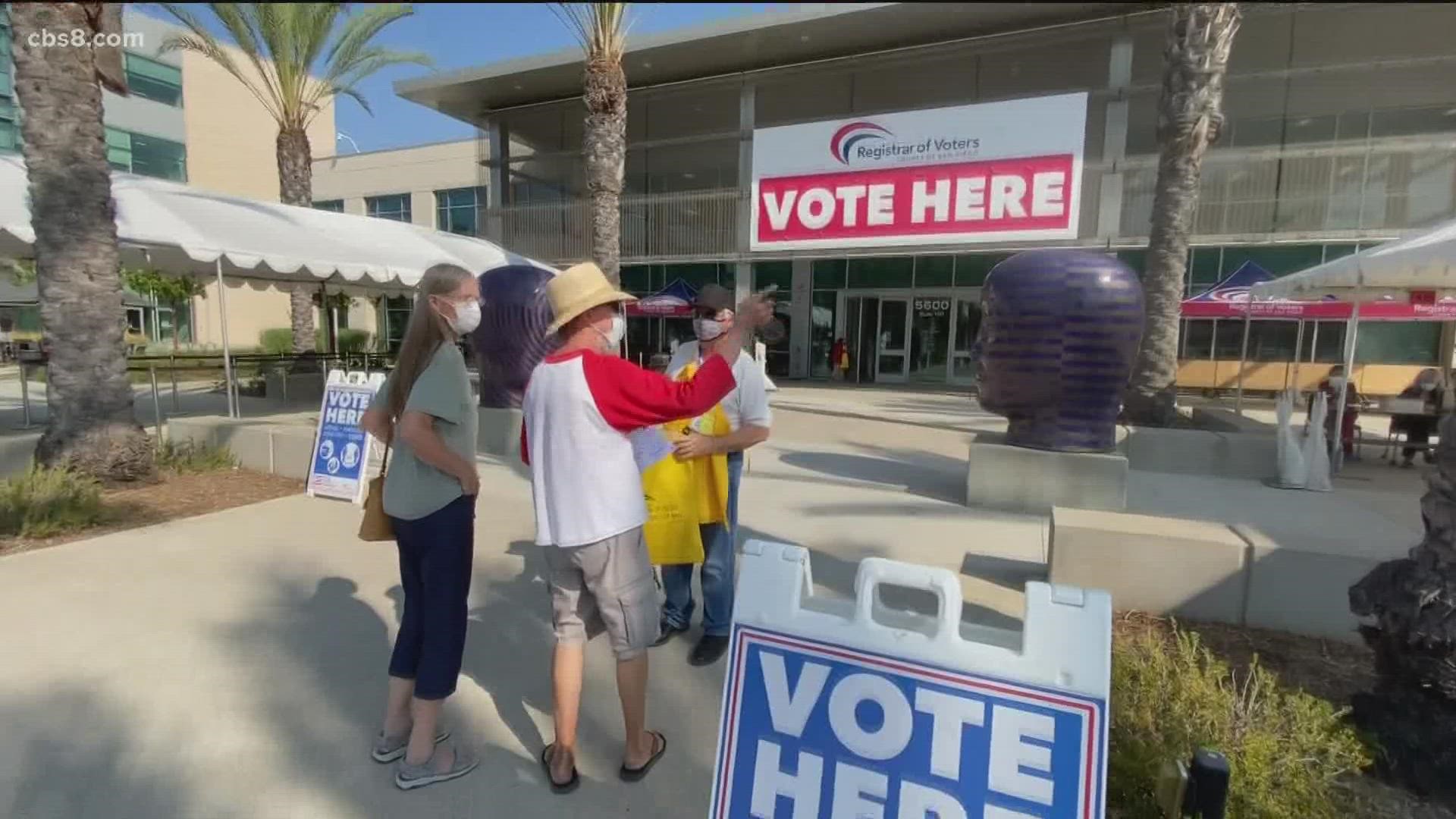 SAN DIEGO COUNTY, Calif. — California voters will choose this week whether to recall Governor Gavin Newsom. Election Day is Tuesday but drop-off locations were open and in-person voting got underway over the weekend and continued Monday.

The gubernatorial recall election is the first since 2003 which ousted fellow Democrat Gray Davis. The state has 7 million more voters now but fewer registered Republicans, according to the Associated Press, with an electorate that is overall is younger and more Latino. Those trends favor Newsom, so long as he can get his voters to turn out.

There are 46 replacement candidates on the ballot with Republican talk radio host Larry Elder polling as the front-runner. Former San Diego Mayor Kevin Faulconer is also running to replace Newsom and cast his ballot in Kearny Mesa on Saturday.

All California voters were sent a mail-in ballot for the recall election. In San Diego, voters can choose to mail them back or drop them off. They can also vote in person with employees ready to assist.

The ballot includes two questions: the first asks, “Shall GAVIN NEWSOM be recalled (removed) from the office of Governor?" and the second asks if Newsom is recalled, who do you want to replace him with the list of candidates to choose from.

Paes said the most common question is "Can I vote on both parts of this ballot?”

Paes said the answer to that question is that it’s completely up to each voter. They can vote on one or both of the questions, but that’s their call.

Here's more about where the election stands and how to vote:

The expected turnout in California for Tuesday's election was 70%, which would surpass turnout for the 2003 gubernatorial recall election of 66.66%, said Gig Conaughton of the County Communications Office.

There are 131 ballot drop-off locations open around the county.

A total of 221 voting locations are open across the county.

All in-person voters in this election will use ballot marking devices. The voter uses a touch screen to make their selections. When finished, the voter will print out a paper official ballot with their selections. The voter can review the ballot and place it in the ballot box to be counted at the registrar’s office election night. This device does not store, tabulate, or count any votes.

Ballot marking devices are fully compliant with the Americans with Disabilities Act, and in addition to English, voters have the ability to select a translated ballot in one of the County’s four federally covered languages: Spanish, Filipino, Vietnamese and Chinese.

A list of in-person voting locations can be found here or find the location nearest you using this map.

The registrar also has resources for voters with disabilities.

"If you show up at 8:01 p.m., you can not join the line," said Cynthia Paes, Interim Registrar of Voters.

The San Diego Registrar of Voters has put in place protocols to help protect the health and safety of election workers, voters, and observers at the Registrar’s office, voting locations, and mail ballot drop-off locations. This includes:

Some locations, such as schools, may require face coverings. You can check which locations require one before heading out. If you forget a face covering, election workers will have one to give you. Voters who are unable to wear a facial covering will be able to vote outside.