The county judge called a post by Black Rifle Coffee Company's owner 'one of the ugliest and most blatant displays of sexism' he'd witnessed. 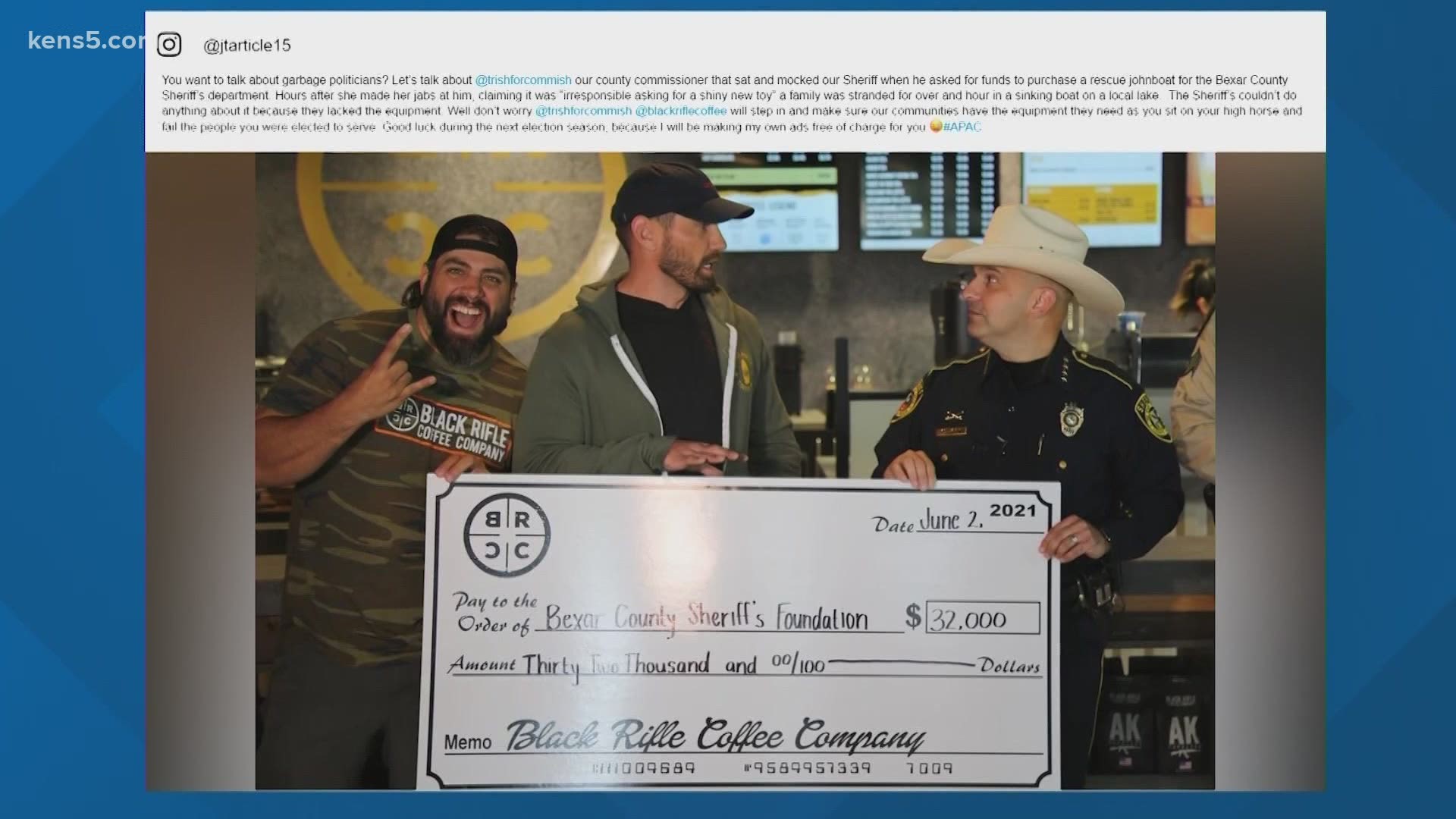 SAN ANTONIO — Editor's note: The above video was originally published on April 6, 2021.

County Judge Nelson Wolff will oppose a donation intended to assist the Bexar County Sheriff's Office acquire a boat, citing what he called a sexist social post made by the donor.

In a scathing letter to Sheriff Javier Salazar, Wolff calls attention to "one of the ugliest and most blatant displays of sexism and personal attacks that I have ever seen in the fifty years I have been in politics." The "attack" is in reference to a post by Black Rifle Coffee Company owner Jarred Taylor.

Taylor's company donated $32,000 to BCSO for the purchase of a boat, which Salazar had requested from the county's Commissioners Court. The court "considered and delayed" the sheriff's office request, Wolff said, because Salazar needed "to provide more information on the cost taxpayers would be forced to incur" as a result of the boat's operation.

Wolff says after making his donation, Taylor made an Instagram post "attacking" Commissioner Trish DeBerry, whom the judge said "questioned the need for a boat as well as the complete lack of information" from BCSO.

"We are tracking toward $14 million in overtime at the jail, at taxpayer expense. We have a record number of lawsuits against Bexar county... and others that are coming. We have deputies being arrested right and left for abusive behavior," DeBerry told KENS 5. "My point in questioning the sheriff in court the first time he came forward was: 'Get your house in order' and prioritize what needs to be done."

"These monies in (Salazar's) foundation are better served for the rank-and-file than a boat," DeBerry added.

In his post, Taylor wrote "Well don't worry @trishforcommish @blackriflecoffee will step in and make sure our communities have the equipment they need as you sit on your high horse and fail the people you were elected to serve. Good luck during the next election season, because I will be making my own ads free of charge for you."

Wolff noted the "hundreds of other vile and despicable" comments that were made in response to Taylor's initial post "which attacked Commissioner DeBerry as a woman, a leader, and her family."

"The 800 (comments and messages) that came through my Instagram account were threatening, harassing, offensive, and vile," DeBerry said. "I do not trust the chief law enforcement official of the county to do due diligence on this because he instigated it."

The judge called it "beyond reprehensible" that Salazar did not publicly condemn the post or the ensuing comments. "The despicable behavior displayed in this matter is no less than an affront to human dignity...it should not be tolerated."

"I do not blame Black Rifle Coffee company for this," DeBerry said. "I blame the sheriff for not providing complete context associated with my questions."

Salazar issued a statement to KENS 5, saying Wolff's letter was "the first I saw of any specific comments;" however, DeBerry told KENS 5 her office made BCSO aware of the post on Friday and noted social media posts tagging the sheriff in an effort to make him aware of the issue. In a follow-up response BCSO spokesperson Johnny Garcia insisted that to their knowledge, the sheriff's office was not aware of any of these comments before Monday.

Wolff said that although Black Rifle's donation is intended as a means for the sheriff's office to acquire a boat, BCSO is still required by law to seek the approval of Commissioners Court. The judge said he will "oppose the expenditure of Black Rifle Coffee Company funds for the boat" following the post, but would still support the use of county funds "if you provide to us the details on the operation, liability, storage, maintenance, and staffing costs related to acceptance of the boat for County purposes."

"I'm not going to be silenced by bullies," DeBerry said. "This was never singularly about the boat. This was about protecting the taxpayer interest associated with long-term maintenance liability and staffing of the boat."

"We have been blessed with two strong leaders who I have the highest regard for," the judge wrote.

Tuesday, Taylor penned a response to Judge Wolff "to correct and provide insight" on his statements to Salazar. Taylor says his Instagram post and his actions were separate from that of his company's.

"Your statement in your letter to the Sheriff is completely false. Black Rifle Coffee Company never initiated any 'attack,'" Taylor wrote. "This is a blatant attempt to slander a company that not only employs residents in your own county, but Texans in both Boerne, and Dallas/Fort Worth."

"I will agree that the public backlash against Trish was strong and, in some cases, used language that I would not have used. However, your beef there is with the commenters, not me or my company," Taylor's letter continues.

"I've received Judge Wolff's correspondence and understand his stance. The first I saw of any specific comments regarding this issue were the ones apparently cut and pasted into Judge Wolff's letter. We are in the process of preparing a follow up presentation regarding a patrol/rescue boat to Commissioner's Court, which will not be at tax-payer expense. The unfortunate area drowning deaths being reported on as I write this illustrate our need for this lifesaving equipment in Bexar County."

And read the full letter below: