“My husband put his hand on the wall to prop himself up and his hand went through the wall,” one mother said of their home's decrepit condition. 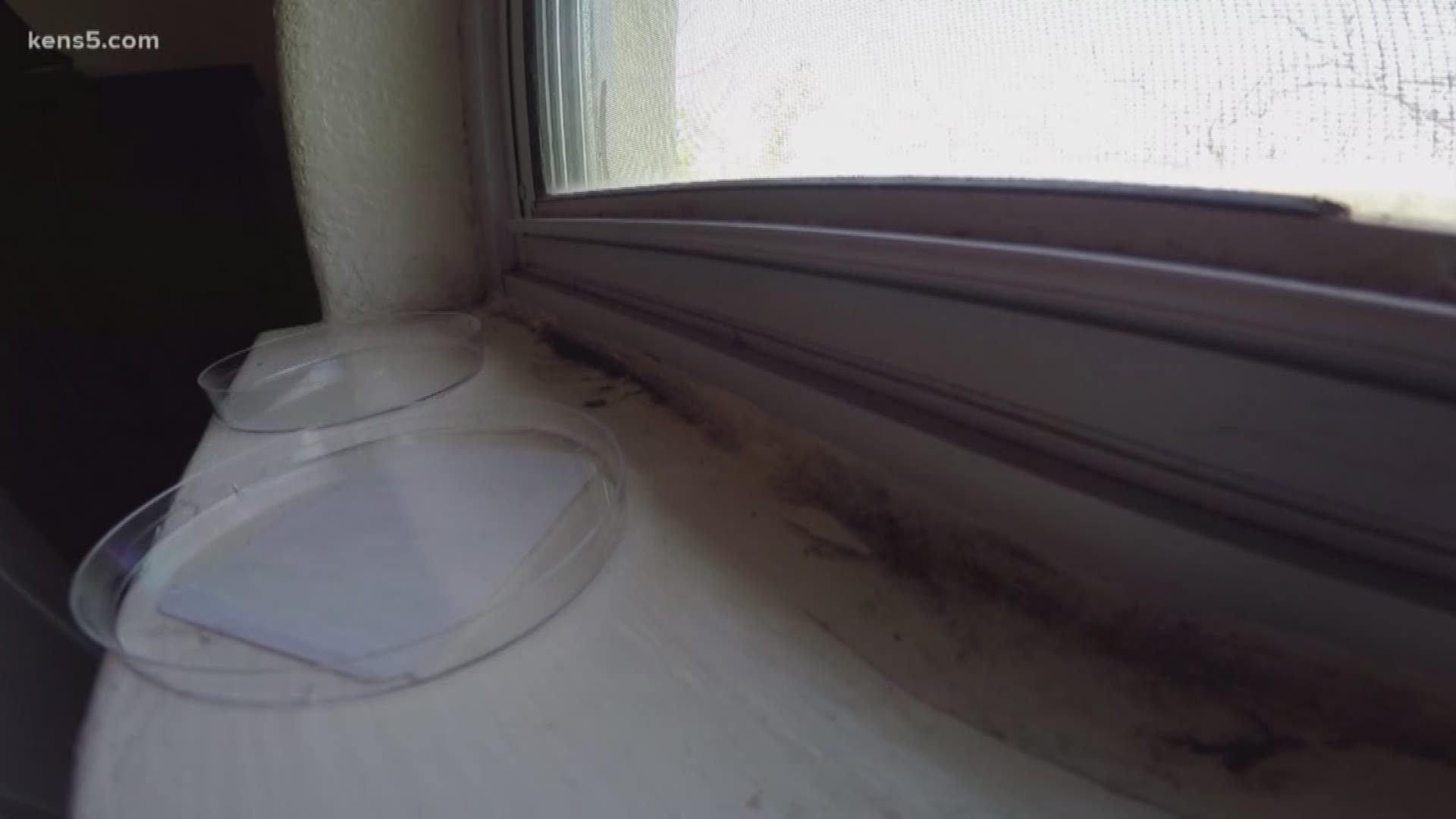 SAN ANTONIO — Military families living at Randolph Air Force Base are demanding action, saying they didn’t sign up for the mold, water damage and health hazards plaguing their homes.

Two families say they are fed up with Hunt Military Communities, the housing management company for Randolph Air Force Base. They say the company has mismanaged their home for years.

Hunt Military Communities is the largest military housing owner in the country, managing six bases in Texas, including Randolph AFB in San Antonio.

The Air Force base is currently home to 300 families, according to Richard Trevino, director of the 502nd Civil Engineer Group.

The homes are rich in history, but Leilani Hamilton says her historical home is putting her children’s health at risk. She moved into it with her husband and two children five years ago and says mold is plaguing her home.

She walked KENS 5 through her home, pointing out mold on the windows, cracked ceilings and water damage. Hamilton says that, when it rains, her windows leak and damage the walls.

“My husband put his hand on the wall to prop himself up and his hand went through the wall,” Hamilton said.

She says it’s become a full-time job attempting to keep the mold at bay and the dust coming out of the vents to a minimum.

“I have to mop my ceilings and my walls just to get rid of stuff,” she said. “I keep a bottle of bleach and water in my shower.”

Hamilton says the ongoing problems are threatening her children’s health.

"Since living here, my daughter now has severe asthma," Hamilton said. "At one point she was taking three daily inhalers (twice a day), three different oral medications, just for all of the symptoms. (She) had a rescue inhaler at all times; currently she is having to take allergy shots every month."

Hamilton pulled out vents to show the dust accumulating inside, dust she says is creating a toxic environment.

“We try and we try to let them (Hunt) know and we ask them to fix things and they don’t fix them,” she said. “They let our problems go unanswered.”

Hamilton has spoken out about the ongoing problems she’s dealing with at housing forums held at the base.

Theirs isn't the only family dealing with similar problems. Trevino says they’ve received countless complaints through Joint Base San Antonio, but Randolph is the worst.

“You expect to move, you expect to change in the military, but you don’t expect to have to change your home because it’s not safe,” Kassandra Wolf said.

Over the last three years, Wolf has documented dozens of work order requests that she says include including mold, plumbing leaks, water damage, and ant and cockroach infestations.

“There was so many (ants) that they were biting him (her son), he has scars,” Wolf said.

Hamilton and Wolf say they have submitted dozens of maintenance orders that often go unfulfilled. They describe the repairs workers have done as Band-Aid fixes.

“All the mold that was inside there (the vent), they just painted over it,” Wolf said.

The two moms say they both requested mold testing and were denied.

“Their environmentalist, I asked him, 'Are you guys going to do mold testing?' He said, 'No, Hunt is not going to,”’ Hamilton said.

A family who moved off base submitted a video where they say they requested a mold test and were told it was not possible unless there were special circumstances.

Hamilton and Wolf both took matters into their own hands and purchased an at home mold test. The results: three molds were detected in Hamilton’s daughter's room, and Wolf’s test came back positive for a mold she says could lead to her son having a severe allergic reaction.

“One of the molds that we found on our report was Penicillium/Aspergillius and that’s his No. 1 allergy,” Wolf said.

Brigadier General Laura Lenderman, commander of the 502nd Air Force Base Wing and Joint Base San Antonio, admitted they need to do better.

“We are helping the families, one-by-one, resolve the issues through the legal assistance we’ve provided to the families,” Lenderman said. “They have an attorney that’s assigned to them if they take that offer, and that attorney works directly with Hunt housing to resolve the differences that have not been resolved in the past."

Meanwhile, the collaboration between Randolph AFB and Hunt is set to continue for some time; they are only 10 years into a 50-year contract.

KENS 5 reached out to Hunt Military Communities for comment, but they only released the following statement:

"Recognizing the importance of serving those who serve and sacrifice so much for our country, Hunt takes these matters extremely seriously, holds itself accountable and is committed to continuing to make necessary improvements to offer every resident high-quality housing. On February 26th Randolph Family Housing partnered with JBSA-Randolph Air Force Command in hosting a community Town Hall. Since that time, we have been working closely with several families on an individual basis to remedy concerns identified at the meeting. In instances where it was necessary for Hunt to visit the home, we have worked with the family to schedule an appointment at a time most convenient for them. Understanding that some projects may require a few days to be completed, we have offered temporary lodging, at no charge, to the families impacted in those instances. Randolph Family Housing has been working diligently in tandem with our Air Force partners as well as Hunt Corporate staff to address any concerns as quickly as possible."

Meanwhile, the families say they have exhausted their options, and while some work is being ramped up, it’s been moving slowly.

The mothers say they feel like they're being held hostage because they both have daughters that are autistic, and the schools on base are ranked among the best.

“If we were to move off base we would have to apply for student transfer, and the chances of her being accepted as a transfer student are very, very slim,” Hamilton said.

Military personnel are taking some responsibility and action in testing on-based families for lead. They say more than 800 people living at Joint Base San Antonio have been tested so far.

“All of which have come back without any concerns to health or safety of the members,” according to officials.

Other popular stories on KENS5.com