News 8 analysis: Arlington could give away millions in stadium deal

City of Arlington officials have touted a “50-50” private-public partnership to build a proposed $1 billion retractable roof stadium for the Texas Rangers. A WFAA-TV investigation, however, has found taxpayers may instead pick up to 80 percent of the tab, which amounts to hundreds of millions of dollars more than initially promised by city leaders. 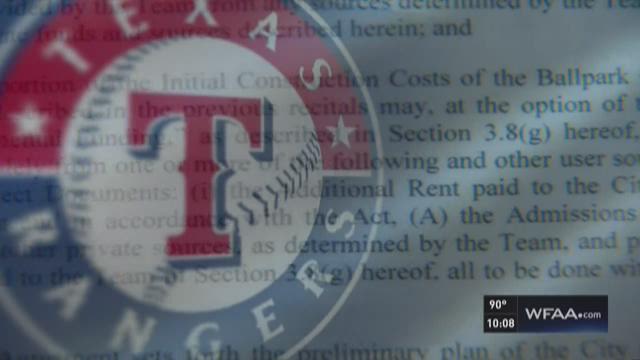 ARLINGTON -- City of Arlington officials have touted a “50-50” private-public partnership to build a proposed $1 billion retractable roof stadium for the Texas Rangers.

A WFAA-TV investigation, however, has found taxpayers may instead pick up to 80 percent of the tab, which amounts to hundreds of millions of dollars more than initially promised by city leaders.

Last month, the Arlington City Council unanimously approved a “Master Agreement” to ask voters to extend sales, car rental, and hotel occupancy taxes that have been used to build AT&T Stadium, home of the Dallas Cowboys.

AT&T Stadium is expected to be paid off early, Arlington officials say, allowing the tax revenues to be extended to build a proposed climate-controlled baseball stadium to replace the 22-year-old Globe Life Park. City officials have pledged that the public would pay no more than half the cost of the proposed baseball stadium.

But an analysis by WFAA-TV reveals that besides extending a half-cent sales tax, and levying hotel and car rental taxes, the approved agreement also includes millions of dollars of additional tax revenues that could flow to the Rangers.

Tucked in the agreement is a clause called the "admissions and parking tax" that allows for a 10 percent surcharge on event tickets and up to $3 additional surcharge on parking. State law allows cities to collect and use the taxes to build their stadiums. Arlington’s agreement, however, allows the Rangers to use the admissions and parking tax revenues to help pay their half of the construction costs.

"If it really is a tax and could be used by the municipality, then in essence it's just transferring revenue from the public sector to the private sector,” said Rick Eckstein, a Villanova University professor who studies sports stadium economics.

"There's a sleight of hand here. There's verbal gymnastics going on,” Eckstein added. “It's relatively unprecedented in terms of stadiums I've studied over the last 20 years.”

Eckstein said the only time he recalls a similar deal was Arlington’s agreement with Dallas Cowboy’s owner Jerry Jones to build AT&T Stadium.

Records obtained by WFAA-TV show Jones and the Cowboys have scooped up an extra $16.5 million annually from parking and admissions taxes. That’s a total of $116 million extra the past seven years.

If collected for the 30-year life of the stadium, that’s $500 million dollars.

“It is one of the worst public projects anyone could imagine,” said Robert Baade, an economist at Lake Forest College in Illinois.

“This is all about not physical obsolescence. It’s really about economic obsolescence,” said Baade, who studies the economic impact of sports stadiums. “So who derives the benefits from building this new stadium? And it comes as no surprise to anyone: the primary beneficiaries are owners and players… It means an increased value for the franchise. It means more money for the owners and players.”

Arlington resident Jim Runzheimer said he was outraged when told about the clause to pass admissions and parking tax revenues to a sports franchise to help pay off a team’s private debt.

"This is a total giveaway by the taxpayer to a private business that does not need any taxpayer assistance,” said Runzheimer, who has lobbied against Arlington’s plans to raise taxes for sports stadium construction.

News 8 asked Mayor Williams about the additional tax revenues that would allow the Rangers to collect potentially hundreds of millions of dollars that could have gone to the city.

"No, we are not giving away anything to the Rangers," Williams said. "We are investing with the Rangers."

Emails obtained by WFAA-TV indicate serious negotiations with the Rangers began only about a month before the “Master Agreement” was approved May 24 by the Arlington City Council.

Mayor Williams cited economic development when asked about the reasoning behind the speed of the negotiations and project approval.

“We wanted to be proactive and try to work out a deal, and we made a very good investment that is a win-win for our community,” Williams said.

Williams also said that Arlington was in competition with other cities for the Rangers, but when pressed, offered no details. "I could name lots of cities, but I'm not going to disclose that. But I can tell you there are a lot of cities that would like to have the Texas Rangers."

The Arlington Mayor also discounted the fact that the proposed stadium, with a seating capacity of some 38,000, often may be sold out. Records show the Rangers had a daily average attendance of more than 36,000 fans the past five years.

“It is a win for our fans because of the experience they will have,” Williams said.

He also said a new retractable-roof stadium will “greatly increase” the opportunity for booking other events besides baseball.

Williams said he does not have conflict of interest concerns when voting on current stadium issues despite his civil engineering firm, Graham Associates, having been a key company in building both AT&T Stadium and the Arlington ballpark. He said no conflict exists because Graham Associates no longer submits bids or accepts money on city of Arlington stadium-related business.