New mural tells the story of San Antonio's south side

The Missions, ghost tracks, and a long-gone family supermarket bring back memories to many locals 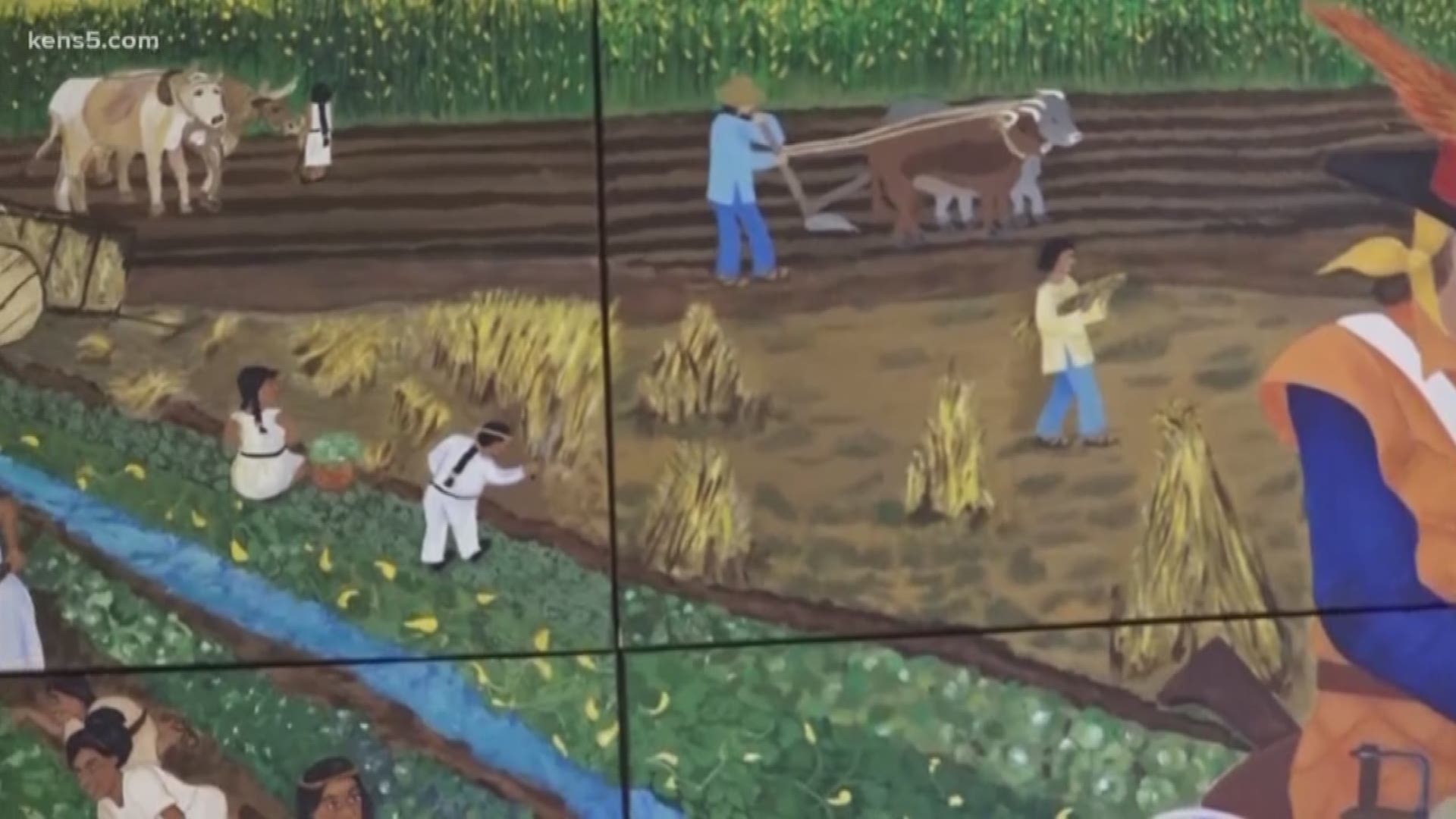 SAN ANTONIO — A new mural unveiled on the south side shows the rich history of San Antonio was painted by a group of seniors at the WellMed Elvira Cisneros Senior Community Center.

Many of them had never picked up a paintbrush before.

In the dining hall, you can find lunch, laughs and bingo- but you will also find a wall of history.

Thirty seniors spent one year painting the 58-foot-mural that takes you on a walk through the history of the south side.

Elizabeth Rodriguez of Bihl Haus Arts led the group who are part of the GO! Arts Project.

Janie Garza has fond memories of her childhood growing up near Mission San Juan Capistrano.

“I was born and raised at Mission San Juan. I would play a lot in the acequias itself. I would catch little crawdads and bring them home so mom could cook them with me,” Garza recalls.

“From the aqueduct comes the water to go to the water and then they irrigate the fields. The aqueduct fills it with water and sends it through the acequias,” she explained.

“When the National Park came in, the community left because most of the ranchers sold their land,” Garza added.

Raquel Centeno’s husband owned a well-known supermarket that was a staple in the area until the nineties.

“That’s the reason I painted the logo of the store and the bakery, it’s very important to me. I think a lot of the community remembers the store,” Centeno said.

“Most of my life I’ve been in San Antonio here on the South side; my life revolves around the south side. My son and my daughter live on the Southside,” she added.

The painters didn’t leave out a Southside favorite, the famous ghost tracks on Shane Rd.

“Who hasn’t been to the ghost tracks,” Rodriguez giggles.

The future of the South side as the seniors see it is also painted along the wall.

The last part of the mural represents San Antonio’s future and what the students want to see happen on the South side and the future.

“They want a state of the art WellMed center where they grow their own food and prepare it; where they have their own gardens. River barges where they can visit all of the missions. They want a brand new sports center,” Rodriguez said.

“Also, we don’t want to forget about our traditions in the future, so we have the quincineras,” she added.

Recently, Hector Nava, one of the painters passed away.

These seniors haven’t stopped telling their stories and they hope people will come to the South side and create more.

“The city here on the South side has improved a lot, has changed a lot,” Centeno said.

Gregory Cross, another person who helped paint the military ribbons along the edges of the mural recommends everyone visit the area and explore the historical missions.”

“Over here they are all over the place, go out there just see the history,” he said.

The Elvira Cisneros Senior Center celebrated its 10th anniversary in the fall and was the first senior center operated by the WellMed Foundation. It is open to anyone age 60 and older.

Currently, WellMed owns and operates three across the city. The GO! Arts Bihl Haus Arts program is offered at all three centers, plus the three senior other centers owned by the city. You can find more information here.