Richard “Bigo” Barnett was photographed with his feet on House Speaker Nancy Pelosi's desk, and allegedly had a stun gun during the events of Jan. 6. 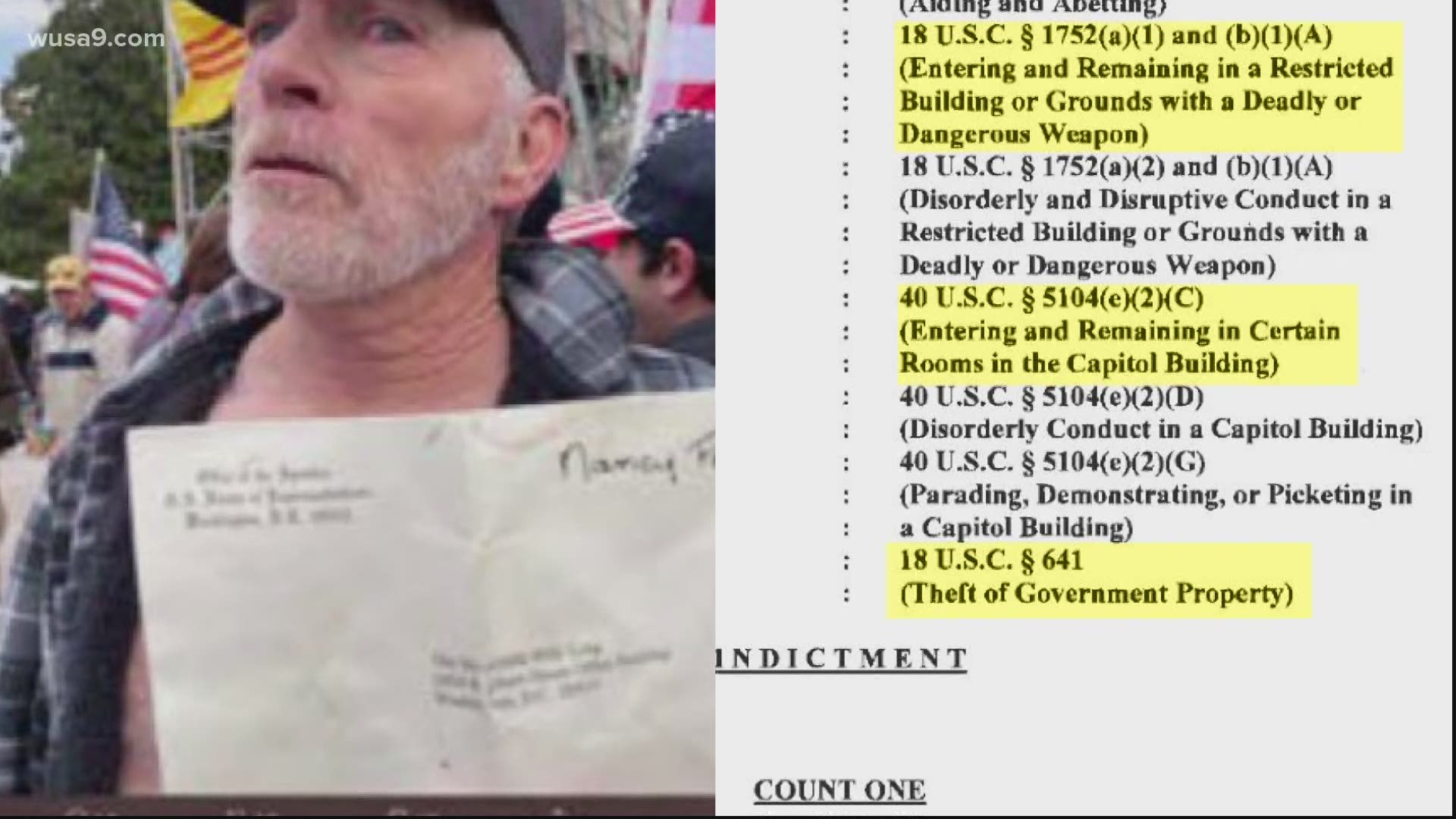 WASHINGTON — One of many lasting images of the Jan. 6 insurrection is a photo from court documents allegedly showing an Arkansas man with his feet propped up on House Speaker Nancy Pelosi’s office desk. Richard Barnett faces multiple federal charges including one felony for his alleged involvement in the violent storming of the Capitol.

Barnett is accused of breaking into Pelosi’s office and not only propping his feet up on her desk, but also stealing some of her mail on his way out the door.

On Thursday, Barnett appeared virtually in front of a federal judge. He said he is being treated unfairly because they won’t let him out of jail. Barnett is being held in a federal detention center in D.C. awaiting trial and he has pleaded not guilty.

RELATED: 'I bled on her envelope' | Rioter photographed with feet on Nancy Pelosi's desk arrested

A judge already denied his attorney’s request to set bond for Barnett once. Prosecutors said Barnett was allegedly armed during the riots.

Thursday was supposed to be a routine status update, but Barnett lashed out at his continued detention after the judge set his next court hearing for May 4.  WUSA9 is not allowed to record the hearing, but was able to listen in and report.

Barnett angrily addressed the judge, prosecutors and even his own team of attorneys.

"I been here a long time," he told the judge. "Make me sit here for another month when everyone else is getting out. Prosecution keeps dragging this out. Everyone else has worse charges than me [and] is already at home.”

Barnett referred to the fact that as Capitol Riot cases move forward, judges are being forced to consider whether to set bond for the accused, giving them a chance to be released before trial.

As WUSA9 previously reported, alleged members of the Proud Boys and Oath Keepers are all asking for bond to be set to allow for their pre-trial release.

RELATED: Members of the Oath Keepers and Proud Boys fight to be released from jail pending trial

On Wednesday, a judge ordered the release of alleged Proud Boy member Ethan Nordean. Legal experts told WUSA9 if a defendant's attorney can make the case they aren’t a flight risk or a danger to the community, it is a judge's constitutional duty to grant them bond. Clark Neily, vice president for Criminal Justice at the CATO Institute added that unfairly holding a defendant before trial is not a legal form of punishment for any defendant -- that only comes after their day in court.

"You don't leave somebody locked up pending trial simply because the public thinks they deserve it," Neily said.

Barnett’s next hearing is scheduled for May 4 and his attorneys said they would be filing a new motion for his pre-trial release.

According to the Department of Justice, there are more than 300 people criminally charged from more than 40 states in connection to the Jan. 6 riots.